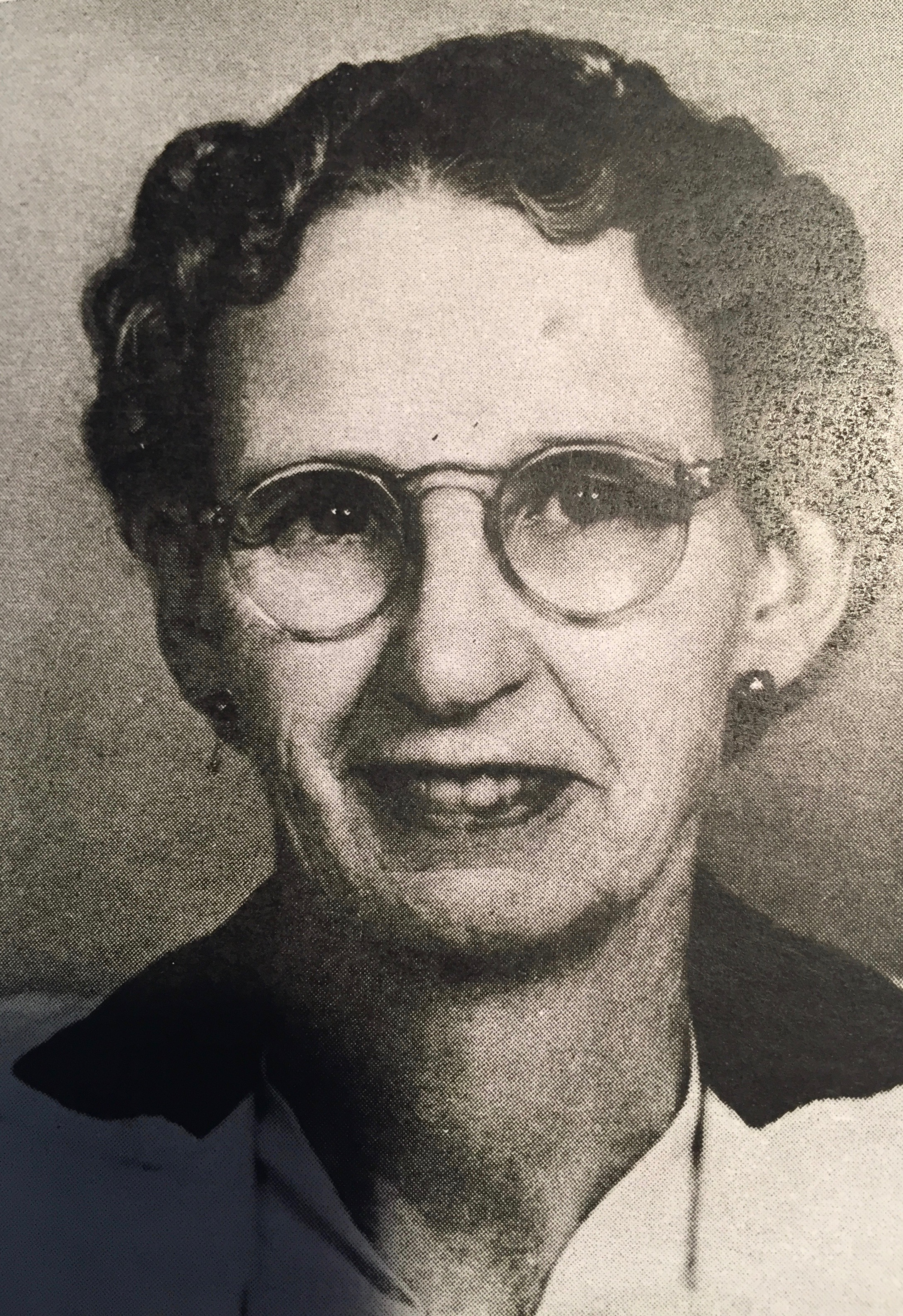 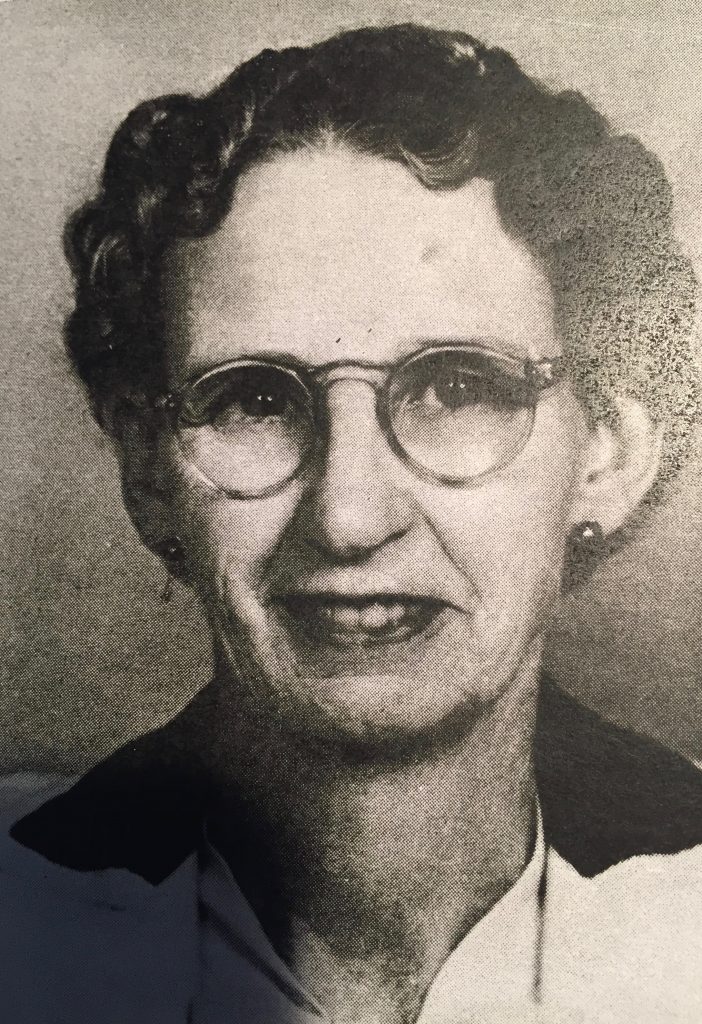 541 Holly Street was the home of nationally renowned faith healer Susie Jessel. She and her family moved to Ashland in 1932, and she lived here until her death in 1966. Her daughter wrote that Susie Jessel treated as many as 300 people a day at times, people who came from all over the country, as well as Canada and Mexico. She treated babies, the elderly, those with tumors, people who were crippled and many more. 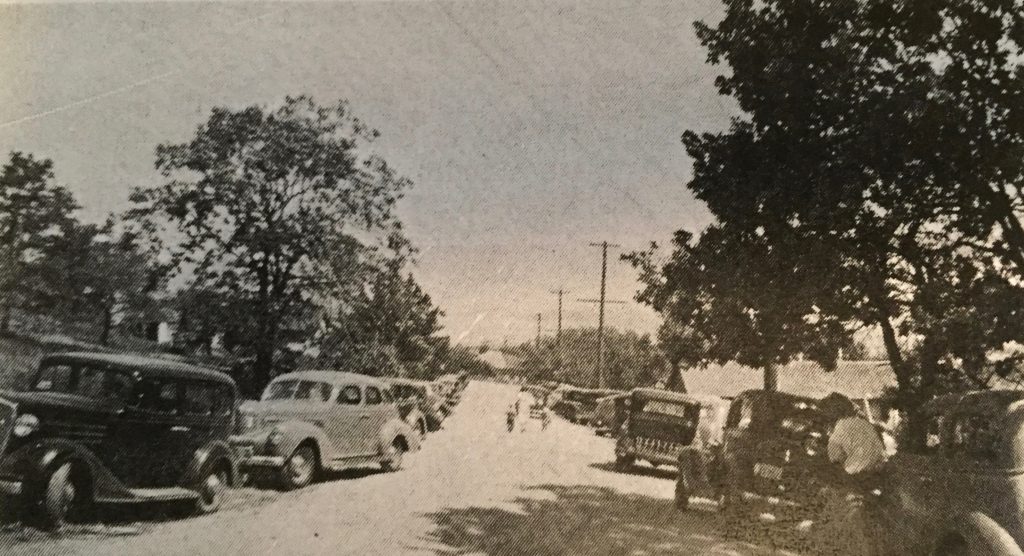 Cars parked on Holly Street in the 1940’s, of people going for treatment from Susie Jessel (photo from Jessel, no date, page 62)

The photo above stimulated a memory for my friend Terry Skibby. He told me: “My folks would tour Ashland by car and see the sights when company came. One location was the Susie Jessel place with the large crowds of people. They were in the trailer park and street at the corner of Holly and Idaho Streets. This was in the 1950’s.”

How did she become a healer? Here are Susie Jessel’s own words.

“On April 2, 1891, I arrived. I was born with what they then called a veil or caul over my face. This was to indicate a special gift in a child. I believe now it is just termed a membrane. Mother noticed my gift immediately. She had trouble with her breasts, and she noticed that when my hands would touch them, the pain would leave and before long all pain and fever was gone.

“During the war Daddy’s eye had been injured and had a whitish scum over it. Before I was two years old I started noticing that eye and I would reach up and touch it. Soon the scum started disappearing and the sight returned to that eye. From that time on Daddy called me his ‘little bundle of magic.’

“I can’t remember when I wasn’t carried at all hours of the night to the ailing. Mother would place my hands on the person, and before long they would get relief from pain. And so my healing career started before I was out of the cradle.” (Jessel, no date, page 8)

“After all my research, I’m convinced she was the real thing, a true spiritual healer….” That quote is from author, lawyer and retired SOU business professor Dennis Powers, who researched Jessel and was quoted in John Darling’s 2014 Mail Tribune article. Powers said that she healed by laying on of hands and prayer. She did not ask for payment, but some people would leave money in her apron pocket. She insisted that she did not “do” the healing, that it was entirely God working through her. 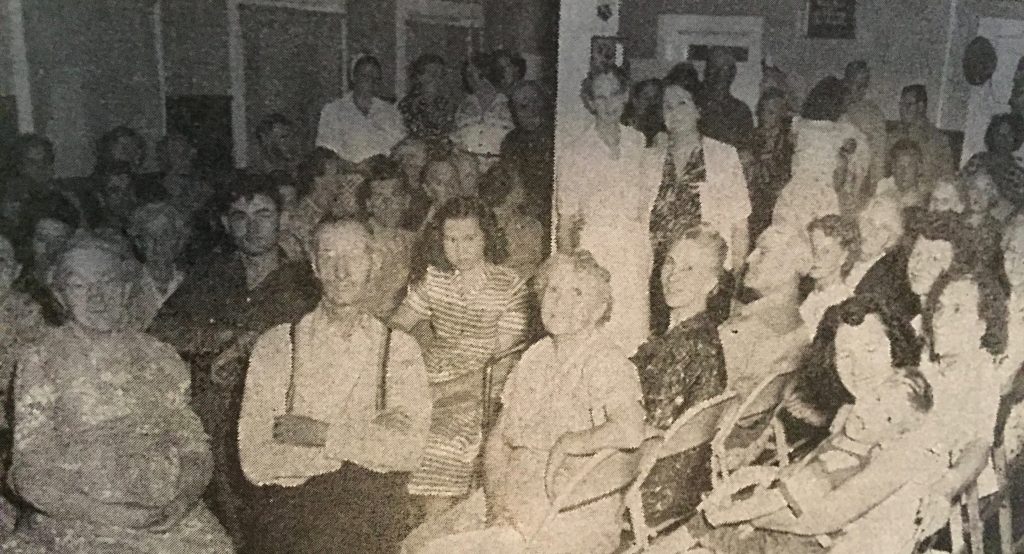 Time Magazine even featured Susie Jessel in a 1953 article. It said: “‘Susie,’ as her patients called her, moved to Ashland 23 years ago, and she has brought a boom to the town. Thousands of hopeful patients keep the cash registers ringing in motels, hotels, restaurants, drug stores and movie houses.”

Unlike Dennis Powers, the author of the Time article was very cynical when it came Susie’s healing powers, as shown by this line from the article. “Says Clarence Litwiller, a local undertaker who claims that last year he buried 18 of Susie’s patients: ‘She’s the biggest business in town for everybody.”

Here is another way to look at Litwiller’s statement. If Susie Jessel treated thousands of people in a year, many of whom their doctors said were near death, and only 18 of them died in Ashland, that could be seen as quite amazing.

Mrs. Jessel did not say that she could heal everyone who came to her. She made no promises. However, she stated that there was “a big improvement in at least 80% of them.” (Jessel, no date, page 49)

Was the healing only psychological?

Skeptics said that healings, if anything happened at all, were only psychological. Mrs. Jessel addressed this attitude:

“Some may feel that the healing is merely in the minds of the patients; however, when one thinks of the skeptical and the tiny babies and animals who with no knowledge of psychology receive so much and in some cases more help faster than adults, I don’t believe this theory applies.” (Jessel, no date, page 66)

Susie Jessel had a fascinating life story, but I can’t tell all of it here. If you want to read more, you can find many of my references for this article in the Ashland Library. 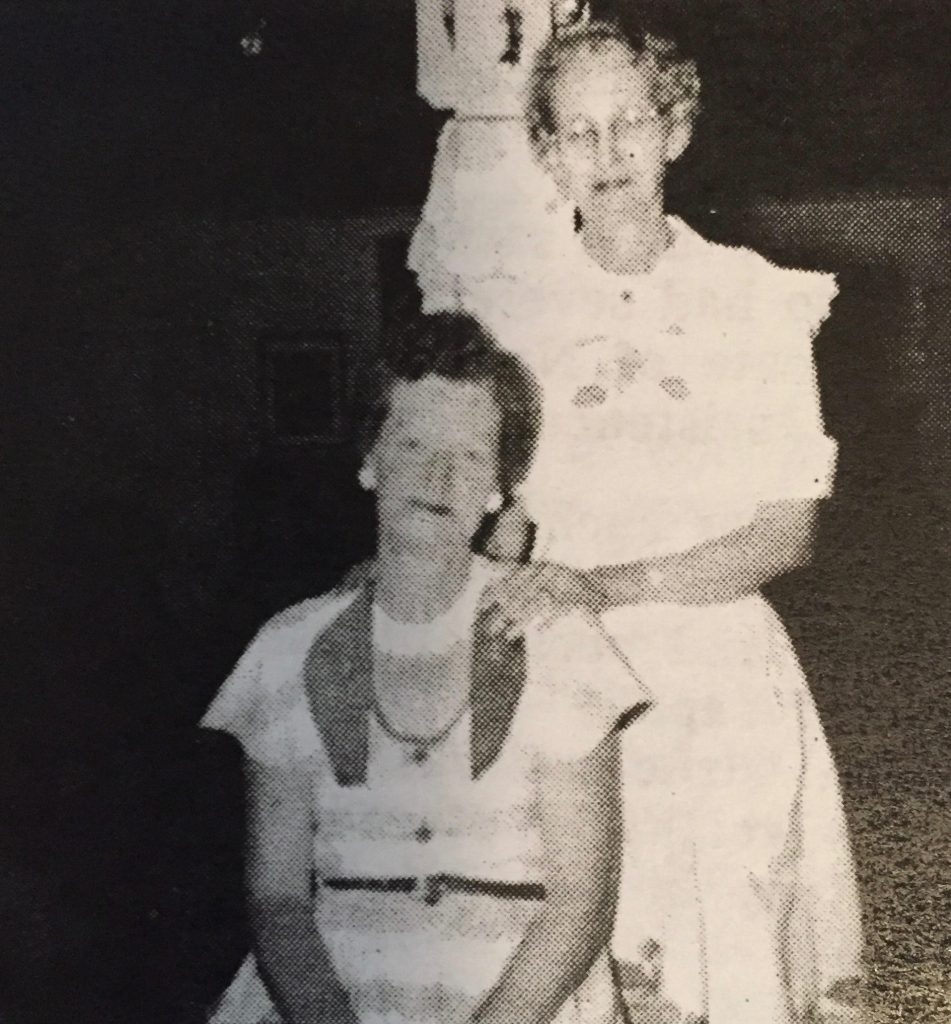 Susie Jessel treating someone by laying on hands (Jessel, no date, page 55)

I will end this part of my Holly Street article with the emotional closing lines from H.K. Ellis’ 1943 magazine article about Susie Jessel.

I was packing things away in the car, getting ready to leave Ashland, when I was told that a patient wished to speak to me. He was pointed out, a short, stocky figure laboring in the nearby truck garden.

I went over, walking across soft red loam. The young fellow wore grimy dungarees, a faded blue shirt and a ragged straw hat pulled low over his eyes. I did not offer to shake hands with him for he seemed desirous of overlooking any sympathy.

He raised his face to mine. His eyes were two circles of blotchy white. ‘Look!’ he repeated. ‘These cataracts are thinning. For five years I’ve seen nothing farther than a yard away. But now, for instance, look at that robin over on the cowshed fence. It’s about 50 feet, I’d say.’

‘You’re right,’ I agreed, following his gaze. ‘But somehow, it’s hard to believe.’

‘Not when you’re behind the eight ball,’ he said grinning. ‘Things Mrs. Jessel once told me are beginning to come true. I know. Why, only last night I caught a glimpse of the moon!’

541 Holly Street is still called the Jessel House, though it is now a vacation rental. 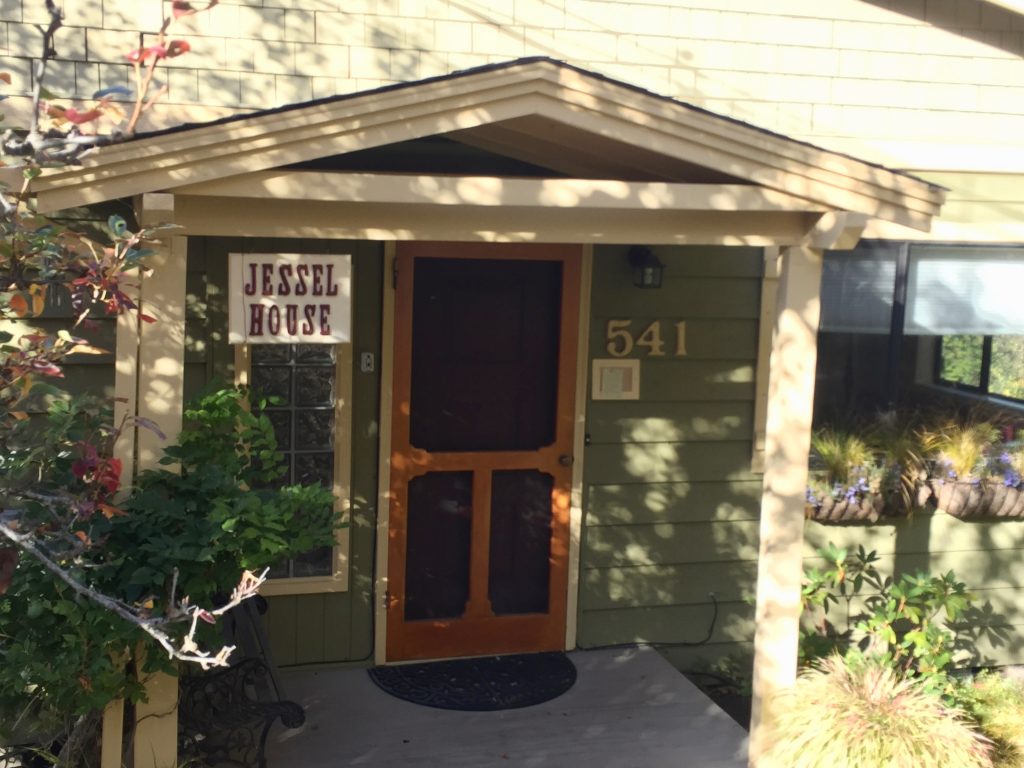 Do any of the readers of this article know someone who was treated by Susie Jessel?

Now let’s walk the rest of Holly Street until it ends at Liberty Street. 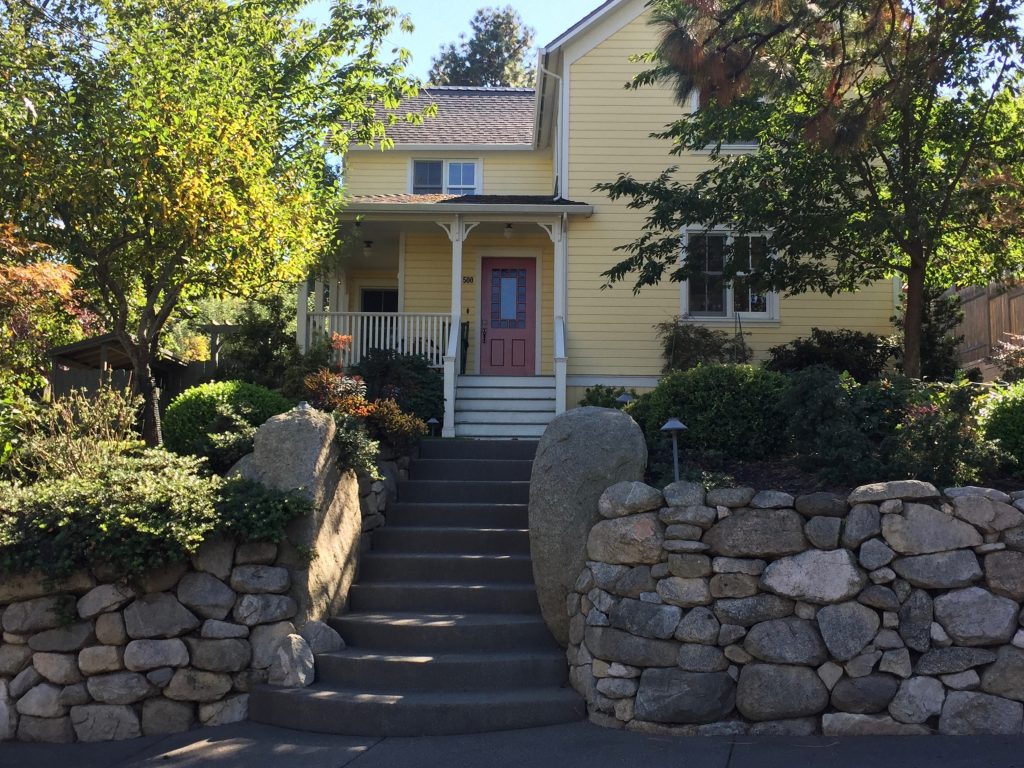 I always appreciate creative stone wall building, especially natural fieldstone walls like this one. I look at a stone wall like this and I think of words like patience, right-brain, strong visual sense, trust and nature. 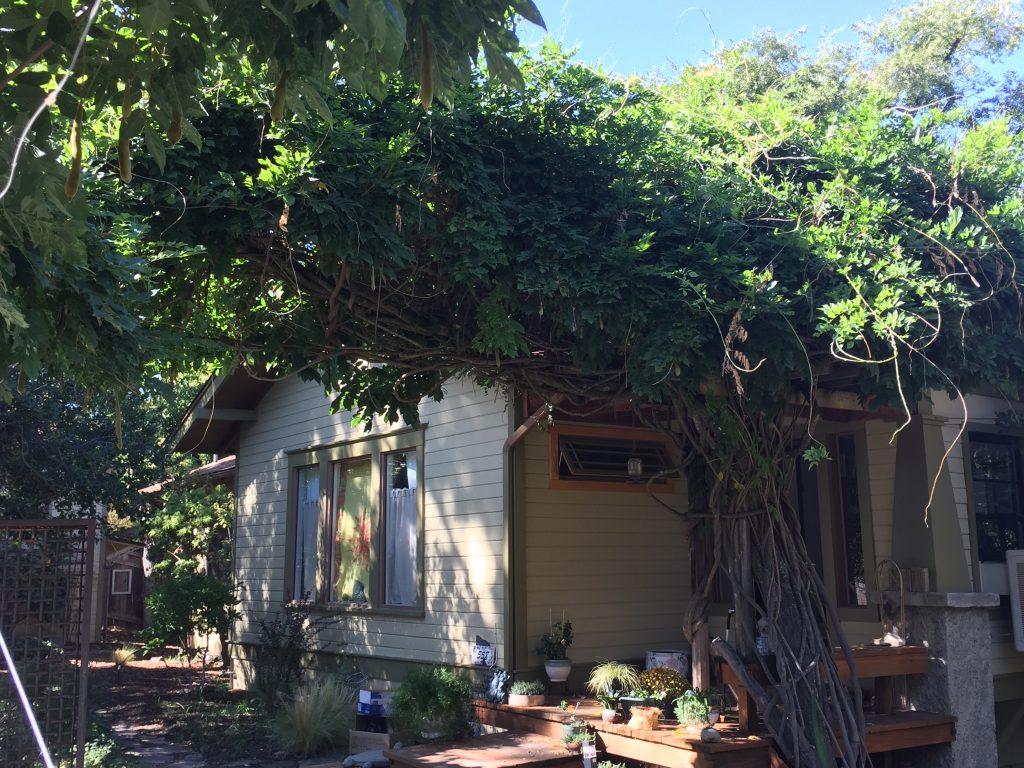 This is not the longest stretching Wisteria vine I have ever seen, but it is close. I think this is the largest Wisteria trunk I have ever seen. As shown in the photo above, from the trunk at the corner of the front porch the vine has been trained to grow towards the street.

There it takes off along the front fence line, all the way to the property line in both directions (as shown in the photo below). I look forward to coming back in the spring to enjoy this Wisteria’s magnificent blooms. 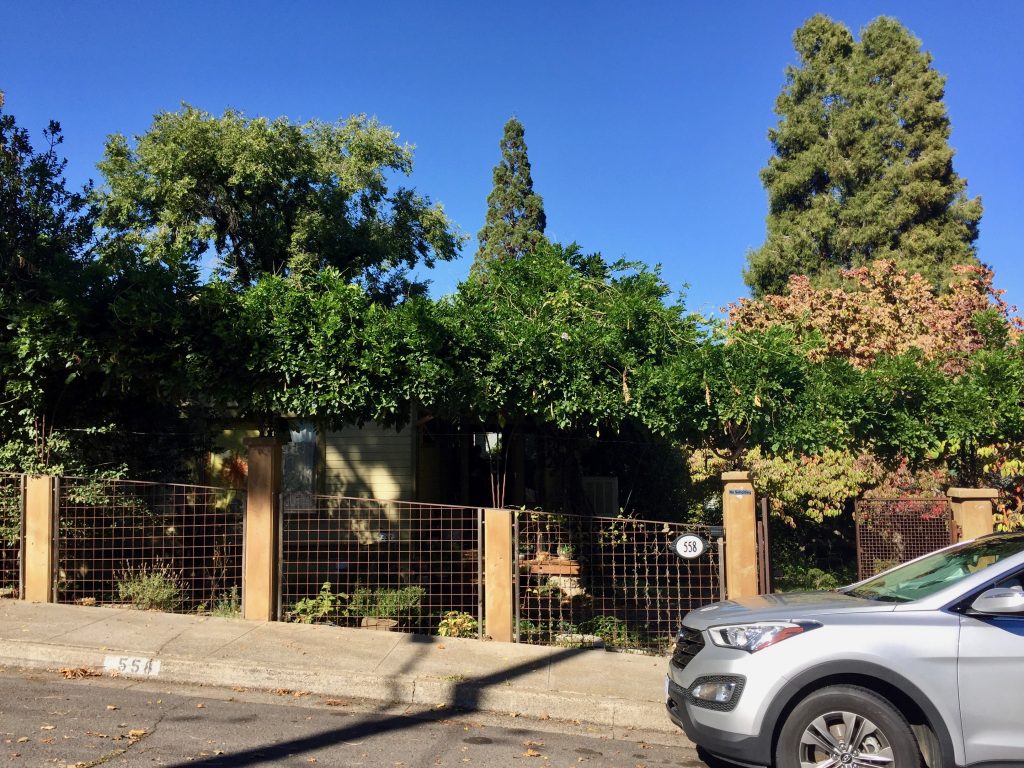 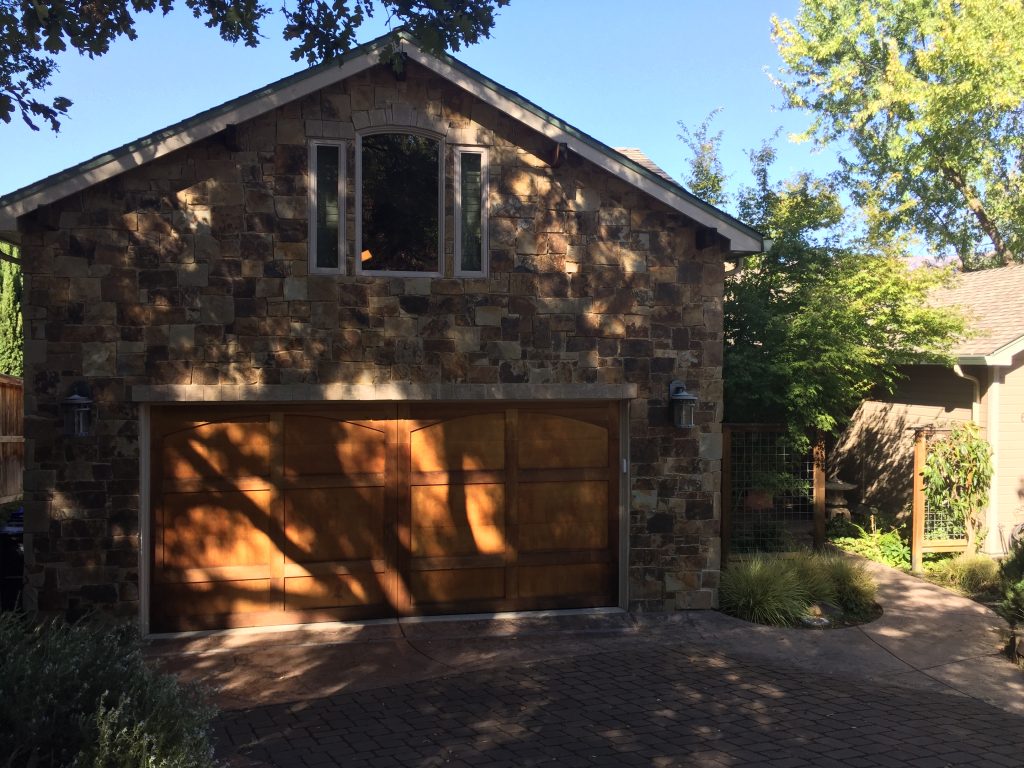 My artistic eye likes this stone-facade garage with upstairs studio. The beautiful wood garage door adds to the charm and a little design help from afternoon sun and tree shadows completes the artistic package. 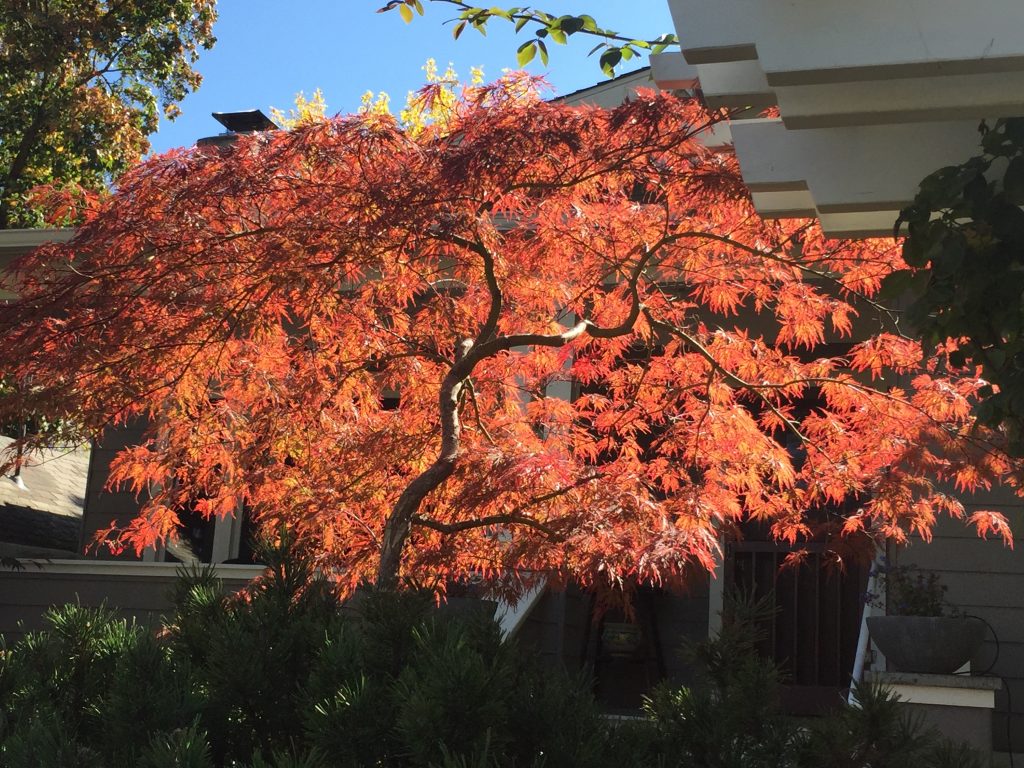 750 Holly Street: This was my attempt to capture the magical afternoon light through Autumn-color Japanese Maple leaves.This house has a lovely front yard, but the afternoon sunlight shining through these Japanese Maple leaves really got my attention. This little tree was absolutely stunning. I captured a bit of the magic, but no matter how many photos I took, I couldn’t capture all of it. 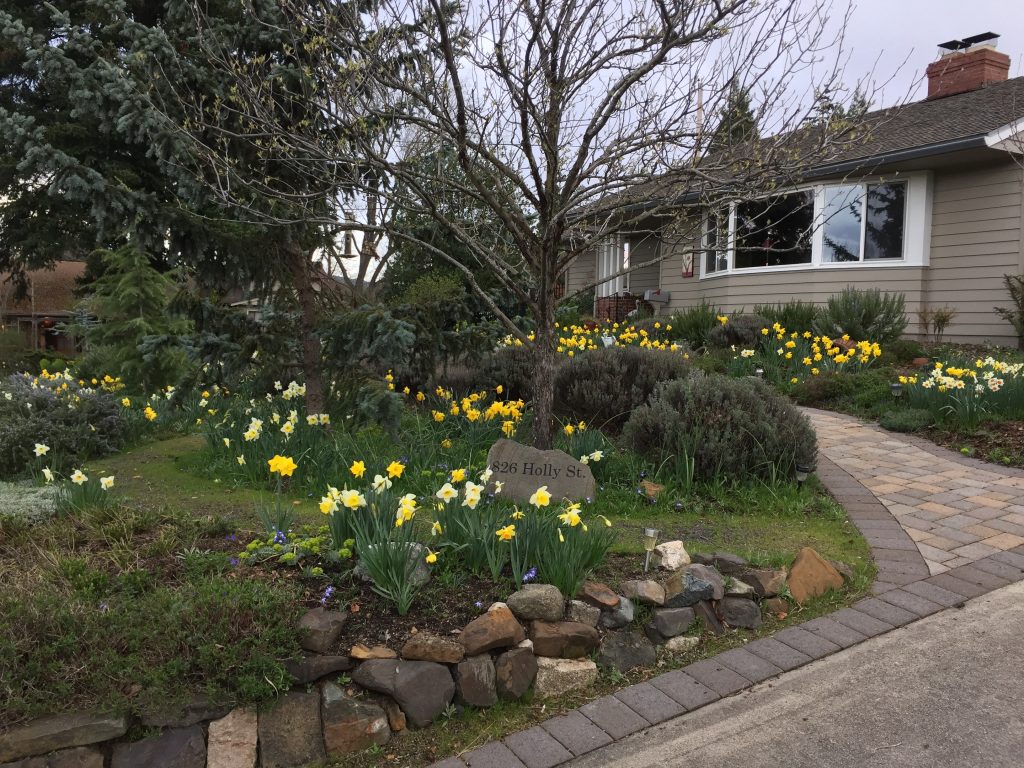 Here at the Liberty Street end of Holly Street is one of the most spectacular Spring gardens in Ashland. If you love daffodils, you must walk or drive to 826 Holly Street in March or April. Here are photos of the garden in March of 2018 and March of 2020, to give you a taste of the daffodils (and lavender) in all their glory. 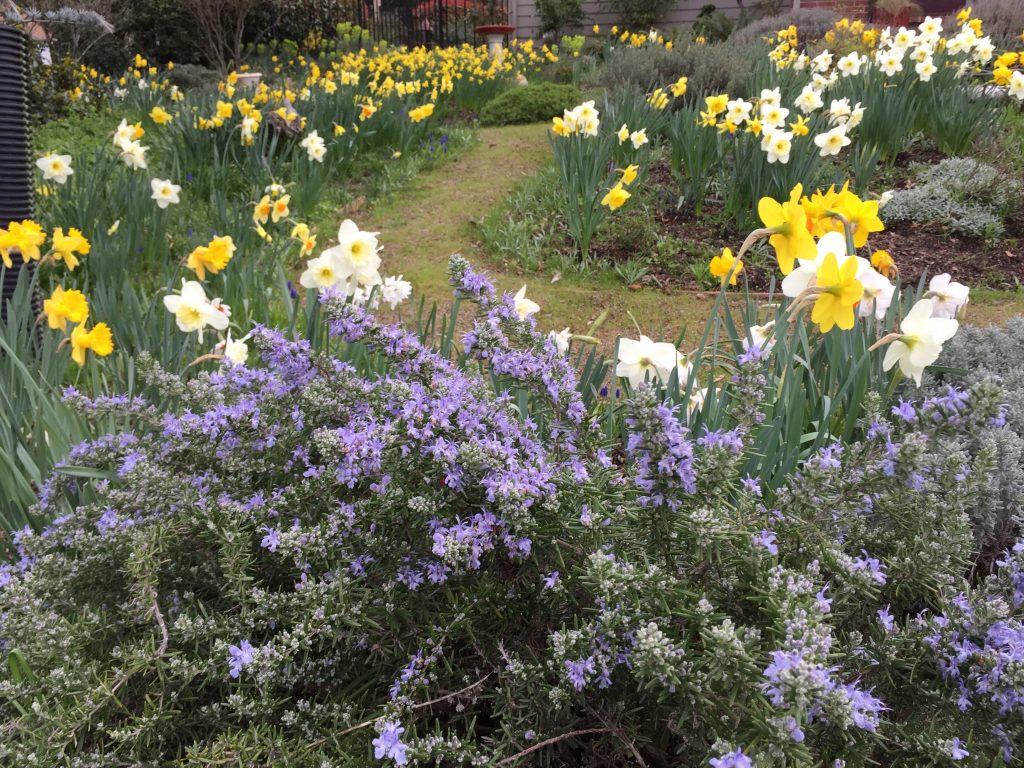 The colors and shapes of daffodil and lavender complement each other during the month of March 2018 at 826 Holly Street. 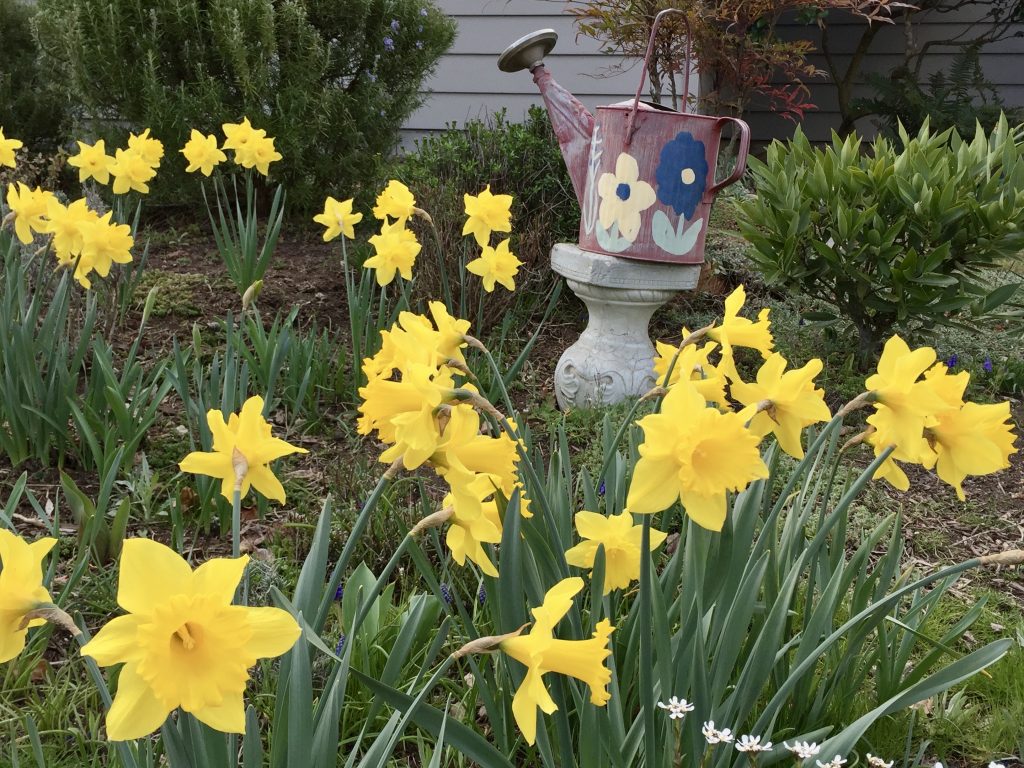 I met Carol, the owner of 826 Holly Street, as I was walking in the springtime. She explained to me that she started planting daffodil bulbs 24 years ago. She liked them so much that she has continued to plant more every year since then, as well as separating the clumps of bulbs. 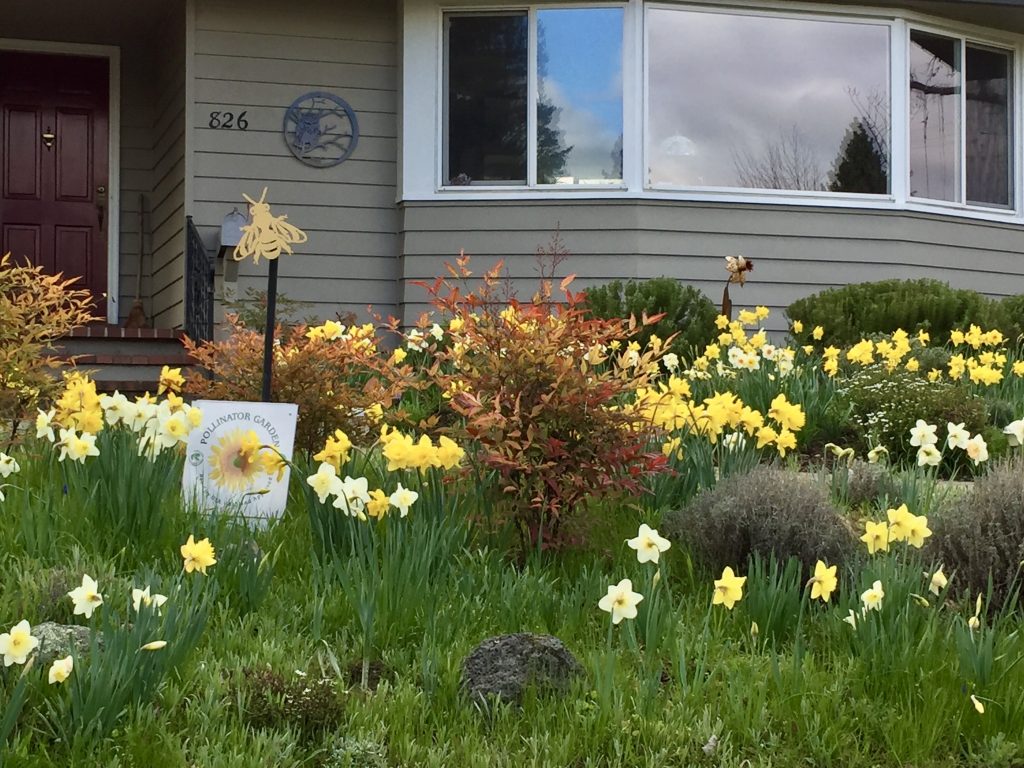 Carol told me her secret was to dead-head the flowers as soon as they stop blooming. She told me: “I want all the goodness to go back into the bulb.” I think you’ll agree that she has plenty of “goodness” to show for her 24 years of hard work and loving care. 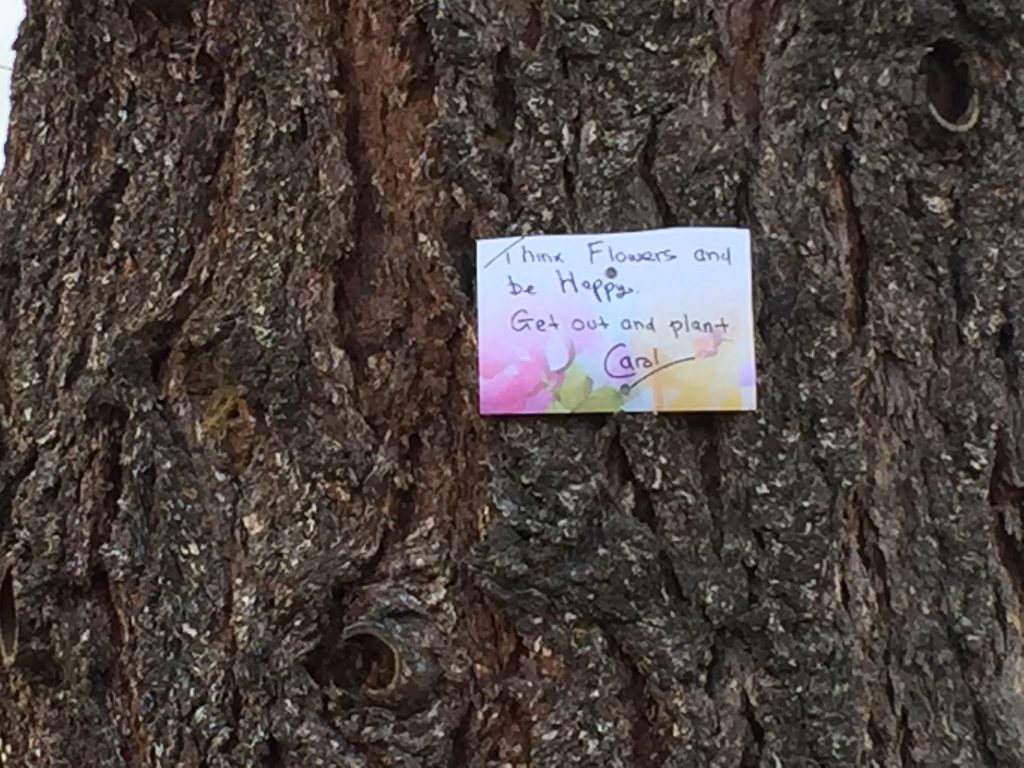 I love the sign Carol placed on her front yard tree: “Think flowers and be happy. Get out and plant.” 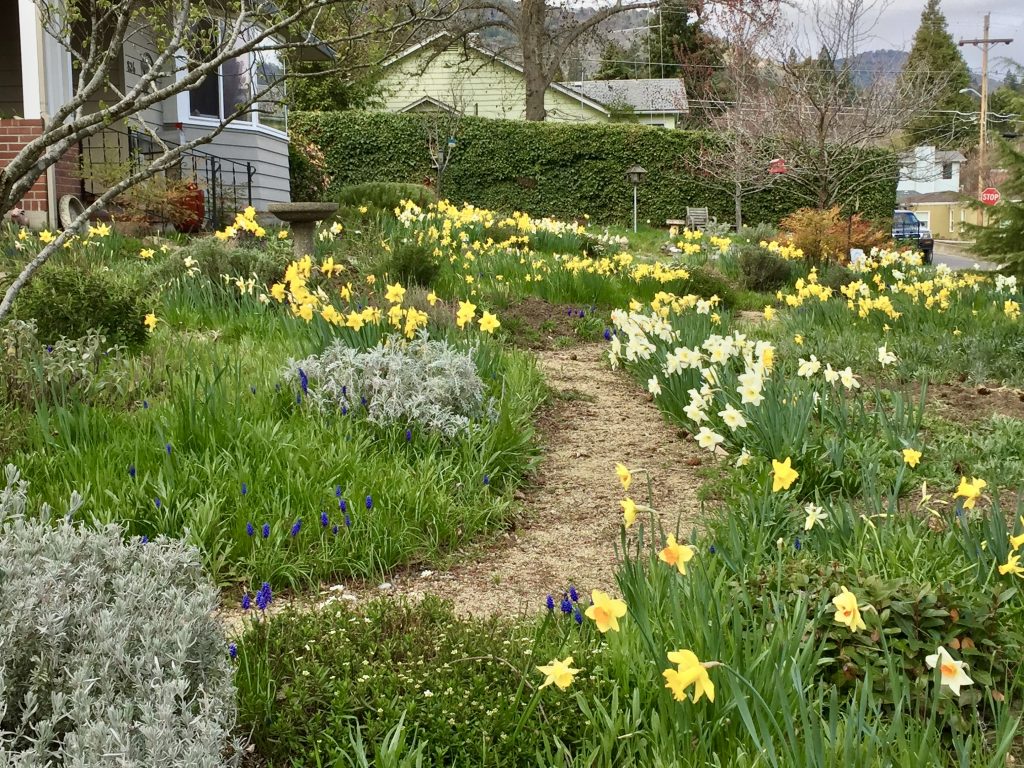 This is a final photo of Carol’s lush daffodil garden in March 2020.

I will close the Holly Street walk and article with a look at two trees that stand out. 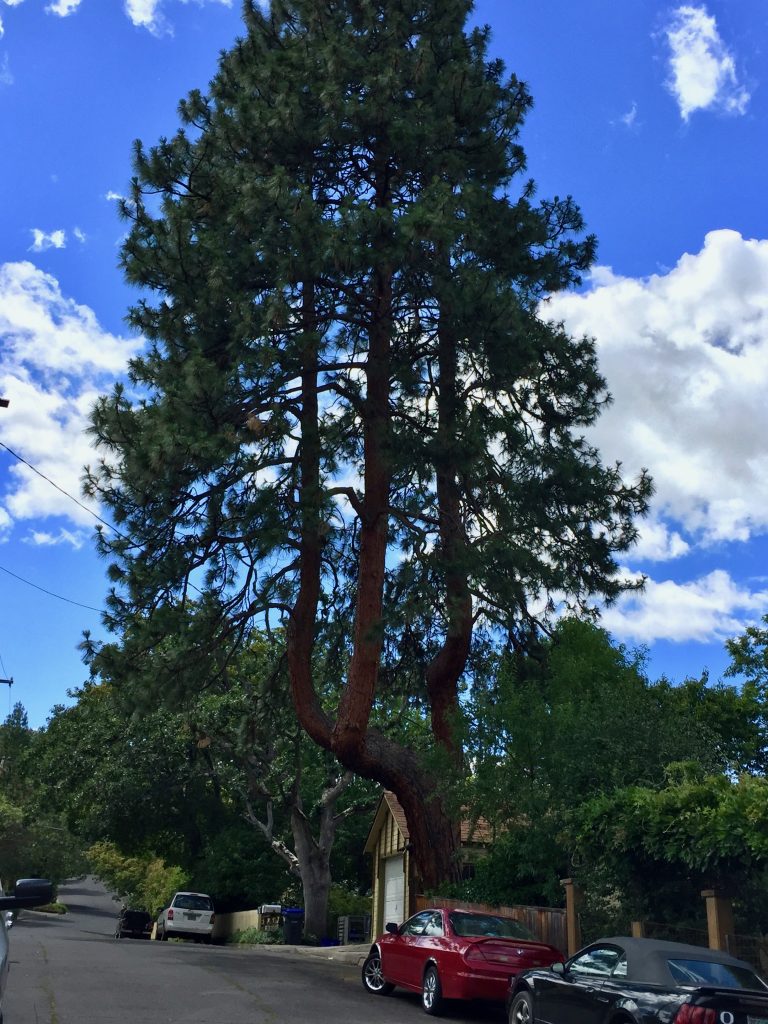 Is this Ponderosa pine at 558 Holly Street a “trail marker tree?”

“Trees have been used as signs for centuries. Between 2002 and 2005 I had the privilege of being involved with the Smithsonian Museum of the American Indian. During that time period, I worked with several native Americans, including a Native American ethnobotanist who taught me many interesting things about Native American Culture including the practice of using Marker Trees to show the way. Native Americans used to use trees to tell in which direction they should travel. These were called Marker Trees.

“Favorite tree selection for these trees were oaks, maples and elms. These species were selected for their flexibility in youth, but hardwood in maturity. Marker trees were bent in the direction of a frequently visited destination such as a water source, campsite, or a safe river crossing.” (Ronda Roemmelt 2015)

The photo below shows a tree identified by experts as a Native American trail marker tree. 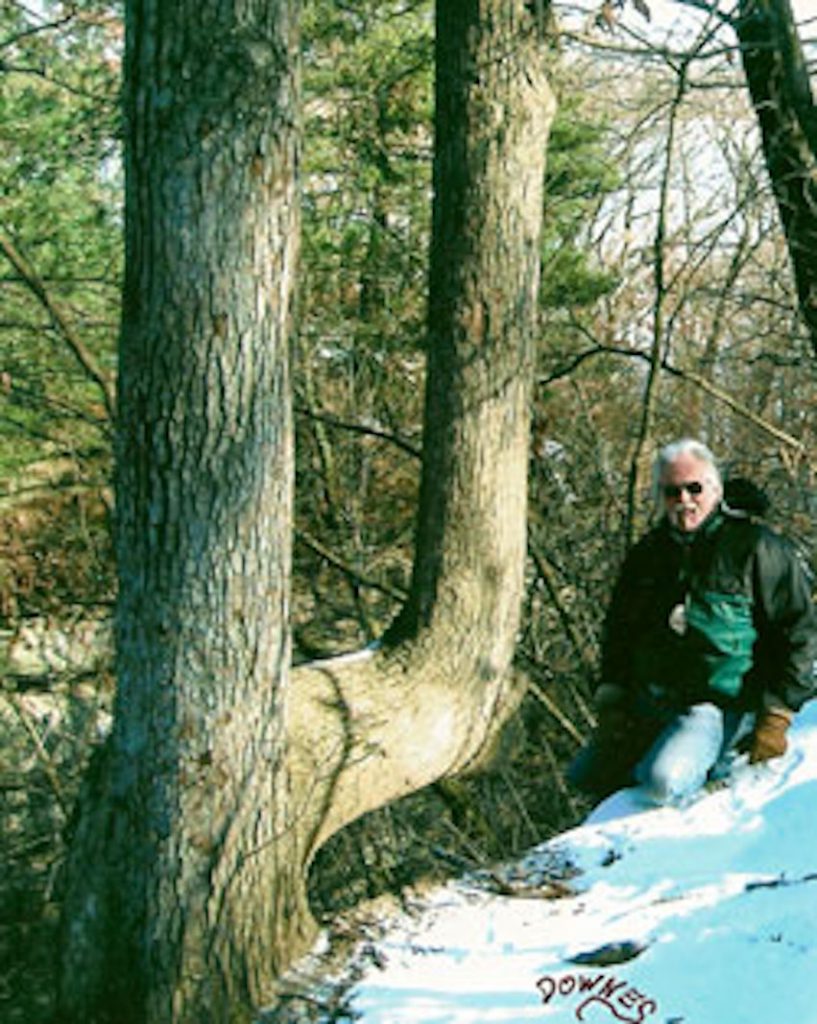 After my research, I have concluded that the Ponderosa Pine on Holly Street is not a trail marker tree, though it would be romantic to call it one. Here is my reasoning. Nearly every trail marker tree photo I saw online shows the bent branch that “points the way” only 3′ to 6′ above the ground (like the photo above). The lowest bent branch on the Holly Street pine is more than 10′ above the ground. I think it is a case of unusual artwork by Mother Nature. 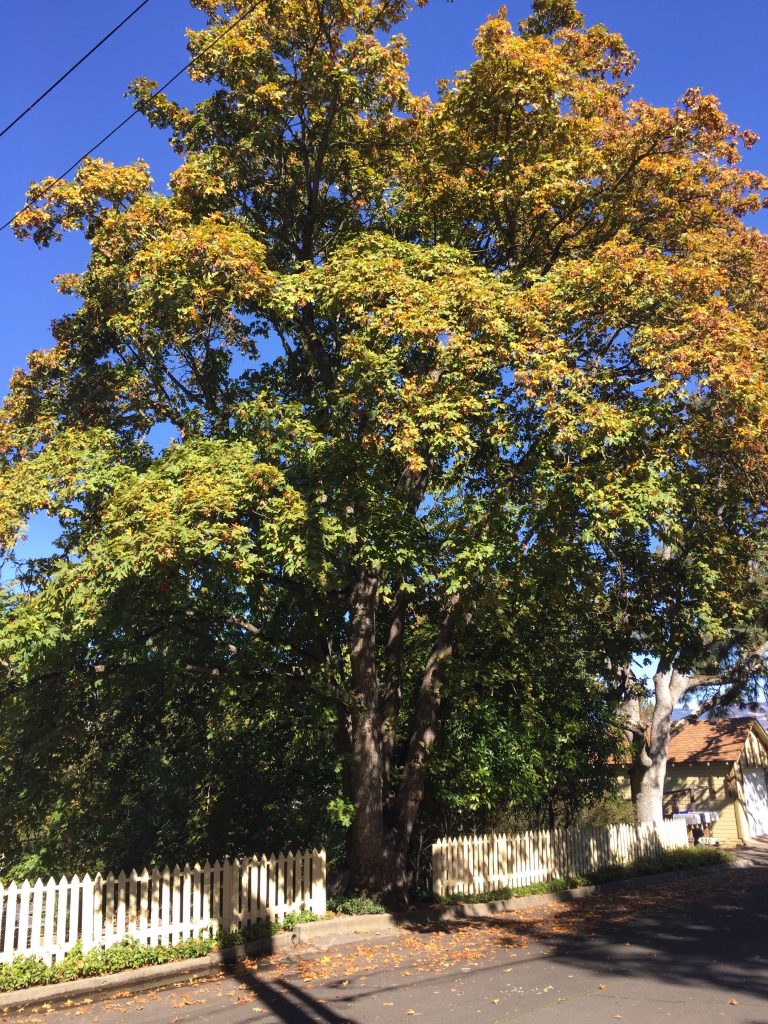 This oak tree is not quite as dramatic as the Ponderosa pine, but it has a massive and beautiful presence on Holly Street.

If you have thoughts about this article, or if you have a Holly Street story to add, feel free to leave a comment below.

References I consulted while writing about Holly Street:

Sanderson, Mary Jessel. Healing Hands: The Story of Susie Jessel, as told to her daughter Mary Jessel Sanderson, no date.