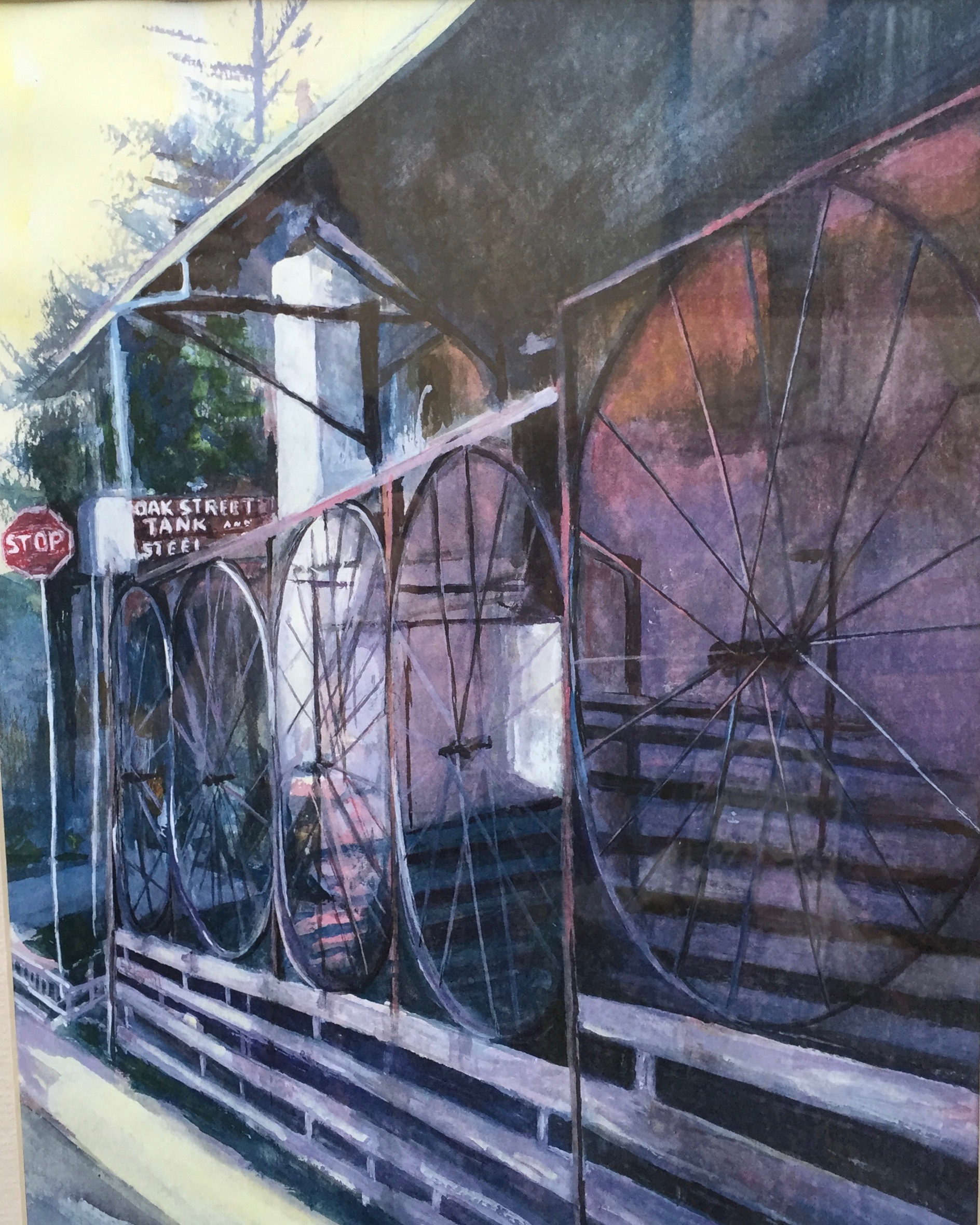 To understand Oak Street Tank & Steel, you have to go back to the beginning of time
(well, Ashland time, anyway).

In the year 1852, Abel Helman and Eber Emery were the first settlers to claim land along Ashland Creek. The two friends from Ohio had tried, and failed, to find gold together in California.  As a fallback, they used their carpentry skills to start a business, as they built the first sawmill in Southern Oregon on the creek.

Helman is remembered today by the names of Helman Street and Helman School.  I will tell you much more about Abel Helman when I write about the Ashland Plaza.  Emery hosted Ashland’s first school classes in his home.  Keep an eye out for his name later in this article in connection with Oak Street Tank & Steel.

Two years later, in 1854, Helman and Emery built a flourmill.  These two mills formed the nucleus of the brand new town of 23 people then called Ashland Mills.

Founding of the Business

Fast-forward 60 years from the beginning of Ashland.  In 1912, the business now called Oak Street Tank & Steel began life as the Park Garage, founded by Sim Morris.   In the 1915 photo above, Sim Morris is the man on the right wearing a tall hat.

If you had wanted to find Sim at the Park Garage in 1915, you would have walked across the street from the newly developed Lithia Park, which had its “Grand Opening” in 1916.  This address (now 51 Winburn Way) housed the Ashland Hillah Temple for decades, and is now home of Ashland’s Community Development department.

In 1925, Sim Morris and his son Harry moved the business to a brand new building at 101 Oak Street. First called Oak Street Garage, it later became Oak Street Tank & Steel (AKA Oak Street Tank), a name they have kept through two additional moves.

At 101 Oak Street, Sim and Harry expanded the business beyond auto repair to include a blacksmith and machine shop.  They finally found their niche in 1938 when they started making steel tanks, which they have now been doing for 80 years through many generations of the Morris family.

The building at 101 Oak Street is on the National Register of Historic Places.  Long-time Ashlanders may remember it as the site of Pioneer Glass & Cabinet from 1953 to 1996.  It is now the site of popular brewpub Standing Stone Brewing Company.

In 1945 they needed more room for their growing tank business, so Harry moved Oak Street Tank a short distance to a block-long building at the corner of A Street and Oak Street.  This building is still often called the Oak Street Tank building, even though the business moved out 18 years ago.  Next to the railroad tracks, the location was perfect for the expanding business that sent and received products by rail as well as by truck.

Harry Morris married the great-granddaughter of Ashland founder Eber Emery.  Harry’s son Gene Morris ran the company for decades.  It is now managed by Gene’s son Jim Morris and his daughter Chris Decker.  That makes Chris’ son Nick, who works in the business, the 5thgeneration family member (and a 6thgeneration Ashlander) to work at Oak Street Tank & Steel!

Fascinating fact: Oak Street Tank is the third oldest business in Ashland, after the Ashland Daily Tidings (since 1876) and the Ashland Greenhouse (since 1906)

The A Street location had been a successful fruit packing plant for Ashland’s orchards for many years. In the early 1900’s, each year hundreds of train cars full of peaches, apples, pears and other fruit would leave Ashland from that building for sale around the country.

Oak Street Tank stayed in business by adapting to the times.  They made many products through the years in addition to tanks: aluminum hulled boats (photo above), “wigwam” burners for local lumber mills, steam cleaners, steel boxes, bomb shelters, and more.

During the late 1980’s and early 1990’s, Cave Junction resident Art Robinson exhibited at State and County fairs, where he found a market of “preppers” who wanted to purchase bomb shelters.  He contracted with Oak Street Tank to make the shelters for him.  Gene Morris’ daughter Sharon told me she estimated about 50 of them were made for Art, both a basic 8′ by 15′ size and a larger 9′ by 24′ size.

Unfortunately I don’t have a photo of an Oak Street Tank bomb shelter, but here are photos of some of their other unusual products.

As company office manager Chris (Morris) Decker was showing me some company historical documents, this brochure (date unknown) jumped out at me.  Look at the “Sunmate,” described in the brochure as “The First Aluminum Surf-Paddleboard in America.”  Do you see in the description: “For added sport – use a sail.”?   Yes, the Oak Street Tank surf-paddleboard could even be used for windsurfing!

Modern windsurfing was invented in the 1960’s and took off in the 1980’s, when it became an Olympic sport for the first time in 1984.  The brochure states that Oak Street Tank has been building aluminum watercraft since 1937. Could this old-fashioned steel tank company in Ashland have been a pioneer in both windsurfing and SUP (Stand Up Paddleboard)?

Chris (Morris) Decker told me this photo (date unknown) was taken in Ashland.  Based on the clothing people in the photo are wearing, my guess is the early 1950’s.

Do you recognize the purpose of the white machine on wheels?  Chris said it’s a coin collection box for the City of Ashland parking department.  Oak Street Tank made the steel box that holds the coins.

This is one of the “wigwam burners” built of steel by Oak Street Tank.  It looks like it must be 50 feet tall.  They were used at lumber mills to dispose of wood scrap by burning.  The heavy (unfiltered) smoke that came out of the top was gradually recognized as a health hazard.  The last wigwam burners (also called beehive burners or teepee burners) were shut down in Oregon in the 1980’s for health and environmental reasons.

When I interviewed Sharon (Morris) Laskos and her husband Ed for this article, she shared with me some family stories and old newspaper articles the family has kept.

Gene Morris (Sharon’s father) started welding at the company when he was 13 years old and later ran the company for decades.

Gayle Morris (Sharon’s aunt) started working at the old Oak Street Garage when she was 15 years old. She said: “I did anything they needed done.  I would meet with customers or run to the post office.”  After her high school graduation in 1946, she ran the office for the next 50 years!  That is dedication to a family business.

Sharon told me that as children, she and her four siblings would separate scrap metal at the company or help out in the office to make some spending money.

How many more years, and how many more generations, can Oak Street Tank stay in business?  Based on their history, I think we would have to live a long, long time to find out!