Ohio Street + Garden of the Month for June 2019 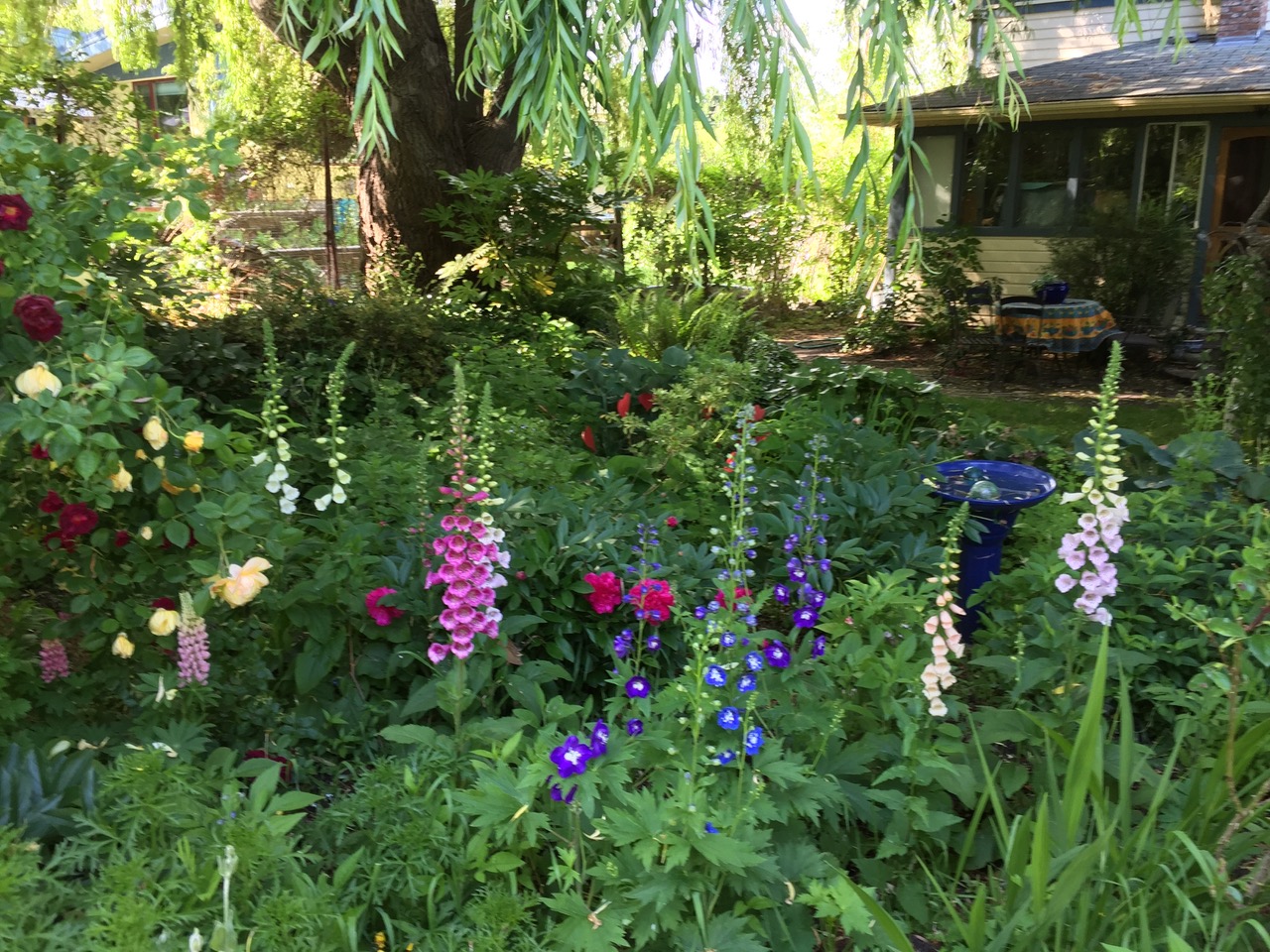 I walked two-blocks-long Ohio Street in order to visit Ashland’s beautiful Garden of the Month for June 2019 (chosen by the Ashland Garden Club).

The Garden of the Month address is 265 Ohio Street. If you visit the garden, please respect the privacy of the homeowner. Please view the garden through the artistic fence from either Ohio Street or the alley along the side of the house.

For this walk, my wife and I started at the Helman Street end of Ohio Street, and finished the walk at Gene’s lovely Garden of the Month.

The yellow house at the corner of Helman and Ohio was built about 1905. The Oregon Historic Sites Database lists it as Frank Jordan house. On the Ashland City Band website, I found the photo below of Ashland’s “Woodmen of the World” band taken April 30, 1905. It lists Frank Jordan (back row, third from left) as a clarinet player. Could that be the same Frank Jordan?

Now let’s turn from gate photos to the rest of our walk along Ohio Street, starting with a quick historical detour. Built in 1905, 147 Ohio Street is another historic house, called the Anna G. McCarthy house.  This is a vernacular style hipped cottage with a wrapped hipped porch.

I found a photo of Anna G. McCarthy in the Ashland Tidings of December 31, 1914. As President of the Chautauqua Park Club, she was one of the female “movers and shakers” of early Ashland. In 1893, the City of Ashland had purchased eight acres for the Chautauqua dome (where meetings were held) and nearby park land for people to gather. By 1916, Chautauqua Park had grown into the much larger and more elaborate Lithia Park. Now in 2019, the original eight acres is the site of the Shakespeare Festival’s Elizabethan Theater and the current entrance to Lithia Park.

Thanks to the Ashland Tidings of December 28, 1914, I can provide you with a list of Mrs. McCarthy’s 1914 Christmas guests: “…Miss Carrie Foster of Klamath Falls, Mr. and Mrs. Frank M. Moore of Eugene, Mrs. Agnes Jury of Seattle and Mrs. McCarthy’s son H.G. McCarthy. As dinner guests on Christmas day Mr. and Mrs. S.J. Evans and son and daughter were present.”

This tree at 167 Ohio Street seems unusually large and lush for a flowering plum tree. I would love to see it when it’s covered with blossoms! The house was built about 1914 and still retains its original bungalow style.

A friend I play tennis with was out in front at 211 Ohio Street when I walked by, so now I know where he lives. He built this lovely raised walkway that accommodates the roots of his huge maple tree.His house dates back to 1930 and was moved to this location.

Ruth Sloan of the Ashland Garden Club wrote: “This garden, designed and maintained by Gene Leyden, is the Ashland Garden Club’s Garden of the Monthfor June 2019.  This is a naturally wet parcel (note the giant pond next door) where dampness- and shade-loving plants thrive and carefully placed sun-loving plants also flourish.  Gene planted the willow tree, now enormous (14 feet in circumference!), when she moved in with her family in 1987, transporting it to the site from the nursery in the back of the Volkswagon bus.  Garden observers can walk or drive down the alley to the right of the house to get more views.”

I was fortunate that my wife Kathy was with me as I walked Ohio Street and visited the Garden of the Month, because she had known Gene about 25 years ago. When Gene saw us outside the gate, she recognized Kathy and invited us in. What a treat!

Gene showed us the Curly Willow tree she “stuck in the ground as a stick” back in 1987. It now rises high, with both curly leaves and branches.

“In addition to the prospering plant life, there are remarkably beautiful constructions by Gene’s friend, the artist and carpenter Nathan Sharples. Look carefully at the gorgeous fence, installed only three years ago. Note the unusual wooden screen door. Also salted throughout the garden are sculptures by Gene’s friend Cheryl Garcia, as well as other items of interest.”

“Gene says she has a special fondness for fragrance in the garden and chooses many plants on that basis, including roses, jasmine and nicotiana. Among the many highlights in the garden are a selection of huge hostas loving their location under the willow, Lady Banks and Cecile Brunner roses climbing through the vegetation, and a smoke tree and smoke bush lending their rich dark foliage as contrast to the riot of greens plus colorful blossoms. There’s a little bit of everything here. This is clearly the work of people of great imagination, especially the primary gardener.”

The garden is the star of the show, but the house has an interesting history. Built around 1890, perhaps as a parsonage for the historic Methodist Church, its original location was on South Laurel Street. The house was moved here to Ohio Street in 1987.

If you love gardens #1: Since this article features a beautiful garden, I will end it with a photo of wise words from a poem by Dorothy Frances Gurney.

If you love gardens #2: I would encourage you to join me as a member of the Ashland Garden Club. You can find the link to their membership form here at the club home page.

Notes: All descriptions of the Garden of the Month in quotation marks are from the Ashland Garden Club article by Ruth Sloan. Photos are by Peter Finkle, except when marked otherwise.