Mystery of the Peerless Hotel Marbles 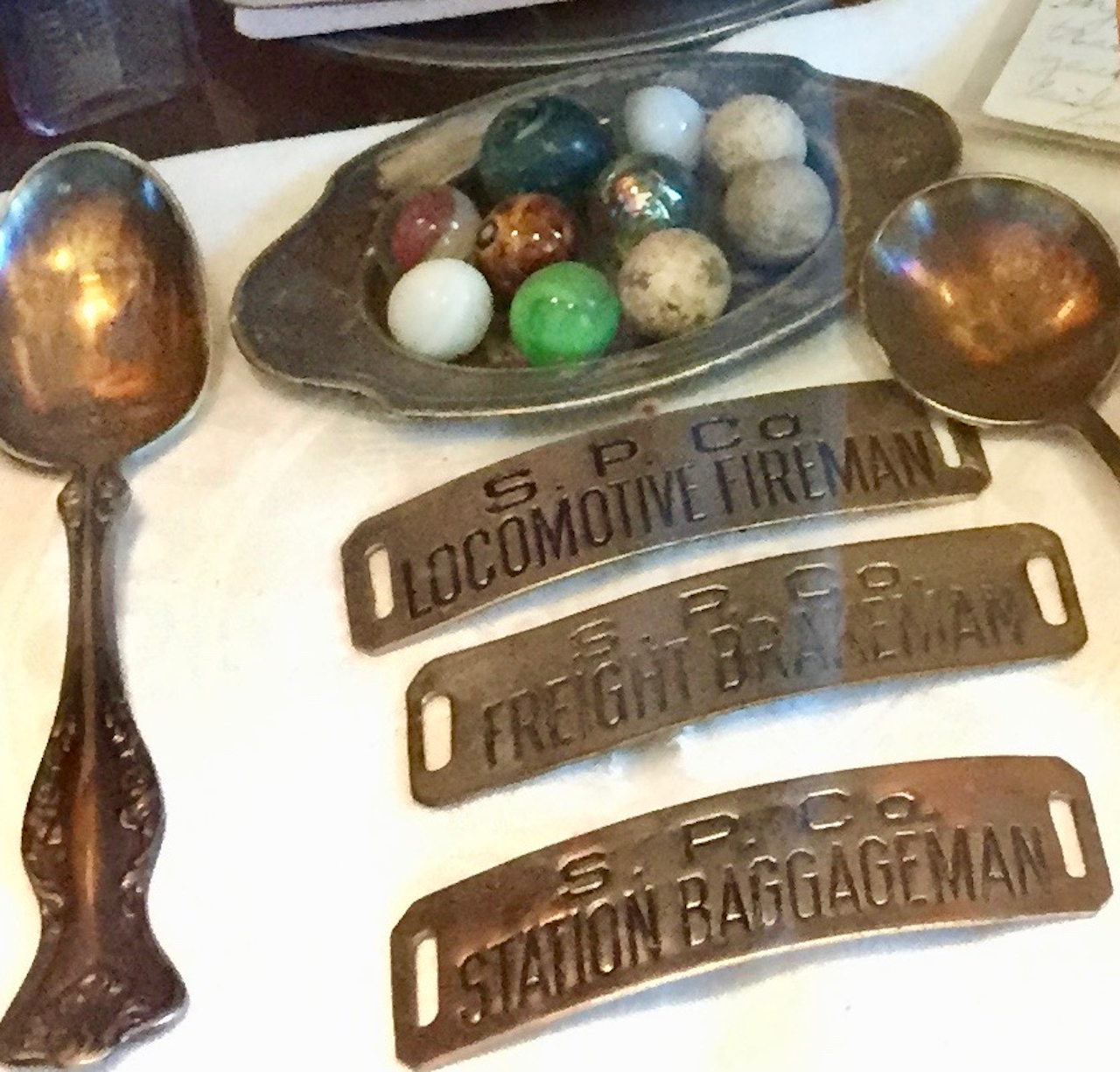 What is the mystery of the Peerless Hotel marbles? To find out, you have to delve into the early and more recent history of 243 4th Street in Ashland, Oregon. Now the Peerless Hotel, you can see from the sign painted on the alley side of the building that this building was once the Peerless Rooms. With fourteen small 10′ by 10′ rooms and one common bathroom, Peerless Rooms was one of several inexpensive boarding houses in the early 1900s Railroad District. Its roomers included single male railroad workers, traveling salesmen, a few single women, and local loggers looking for a monthly shower plus a comfortable bed.

When Southern Pacific shut down most passenger railway service in 1927, the Railroad District fell into a decades-long decline. So when Crissy Barnett Donovan bought the Peerless Rooms building in December 1990, it had been long vacant and was falling apart. Crissy acted as her own general contractor and undertook a huge 3-year renovation project.

She was able to save and renovate the original doors, windows and most of the interior woodwork. This was important because it allowed her to have the building listed on the National Register of Historic Places, and for another surprising reason I will come to in a moment.

During renovation, they had to excavate a foot below the ground-level floor to meet current code for adequate space below the floor. The only historical objects found in the excavated dirt were many glass and clay marbles, the kind kids may have played with 100 years ago. Crissy theorizes that children played with marbles on the wooden floor of the front room, and some fell through cracks.

Speaking of marbles, they reappeared in Crissy’s life a few months later.  The floors were back in place, but the original tall baseboard along the walls was still missing so you could see through that empty space to the floor of the next room.

Toward the end of a workday, lost in thought, Crissy assumed she was alone in the building as she walked through the downstairs rooms.  She perked up as she heard the sound of a marble rolling nearby on a wood floor.  She looked down through the missing baseboard area and saw, in the next room, a large marble rolling on the floor.  She thought to herself, “One of the workers must still be here,” and went through the door into the next room.  No worker, no one, no marble, just an empty room. It was a mystery.

Late in the renovation process, standing in an upstairs room, she got into a heated discussion with her historical consultant.  Suddenly both of them heard the loud “Crack!” just like the sound of a marble that had been thrown hard hitting the floor right next to them. Startled, they looked around…and saw nothing. The tension between them dissolved in that moment. Yet the mystery deepened.

Fast forward to May 1994. With renovation complete, Crissy held an all-day open house for members of the Ashland community to walk through all the rooms of the Peerless Hotel before the first guests arrived. During the afternoon, Crissy noticed a white-haired, elderly woman who was spending a long time in the upstairs rooms. Toward the end of the open house, the elderly woman approached Crissy privately.  She said to Crissy, “Do you know you have a friend?” A bit confused by the question, Crissy responded, “I hope I have a lot of friends.”

The woman chuckled and continued, “What I mean is you have a friend here in the Peerless and her name is Amelia. She is a spirit here and she told me she is very happy with what you have done with the building.” The elderly woman went on to tell Crissy that the spirit-Amelia was a young woman with red hair who had lived in the Peerless Rooms for many years when it was a boarding house.

Hearing this, Crissy was in a bit of shock.  Since she had already felt the presence of the playful spirit twice through the sight and sound of marbles, it kind of made sense. Though Crissy did tell me, “I am generally skeptical and I wouldn’t believe it if it hadn’t happened to me.” Crissy assured me (as she would assure all who are reading this) that Amelia is not a scary spirit but has only been playful in all of her appearances.

Crissy has received praise for her beautiful renovation from the Ashland Historic Commission, from the National Register of Historic Places and from many Ashland friends. But the most memorable praise for her dedication to the legacy of the Peerless Rooms building has to be the praise from a 100 year old spirit and former resident named Amelia.

(This article is based on an interview with Crissy Barnett Donovan, May 17, 2019.)