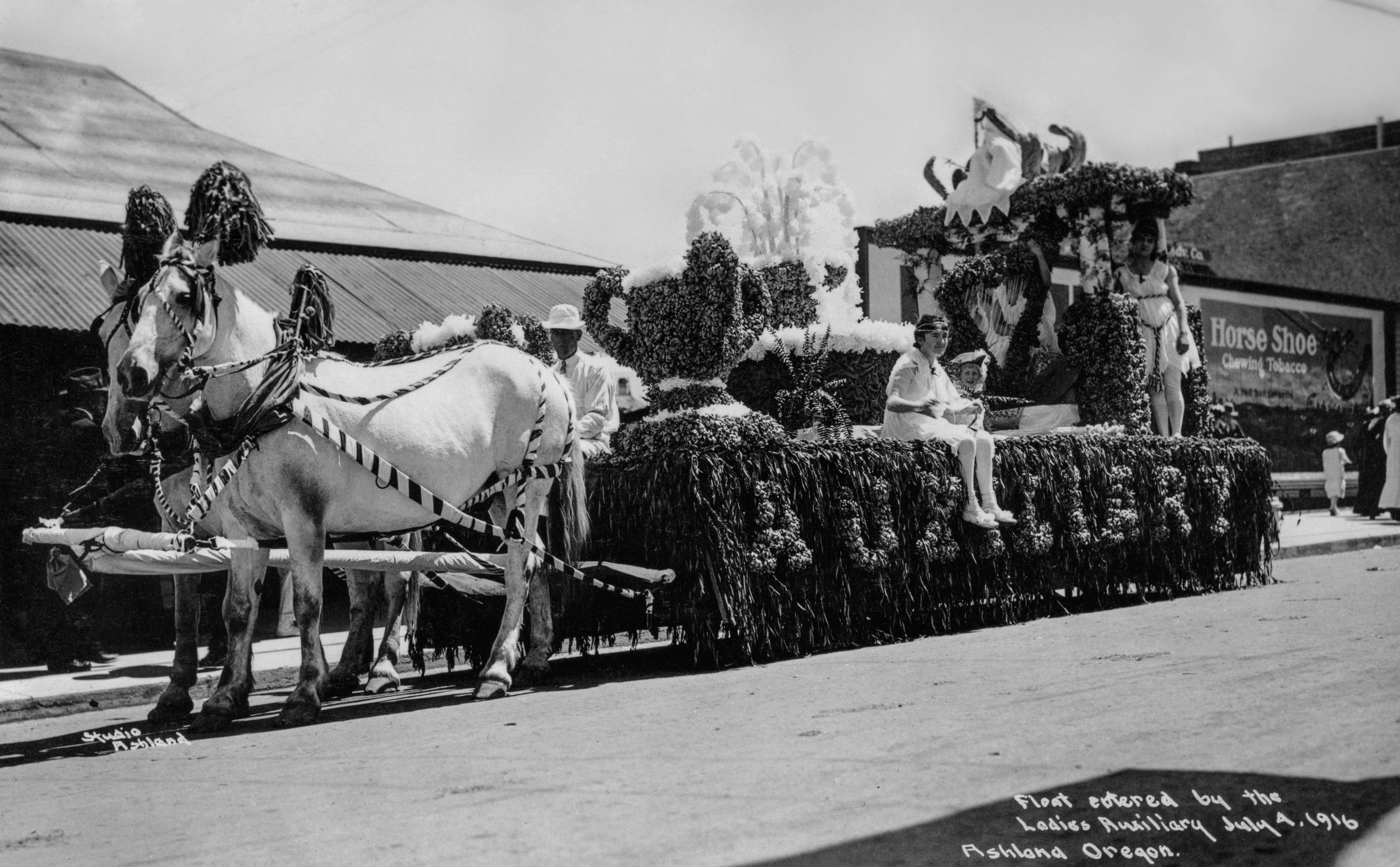 Was this the largest and most audacious celebration in the history of our town?

It takes many streams coming together to form a huge river. The Amazon River of Ashland 4th of July celebrations was the year 1916. From what I know of Ashland history, I think it was the largest and most audacious celebration in the history of our town.

Here are the streams that created 1916’s audacious river.

The third, an audacious and booster-crazed stream…July 5, 1916 was also the official dedication of Ashland’s Lithia springs water. Local boosters were convinced that the combination of Lithia water, sulphur water and soda springs water was about to catapult Ashland to recognition as a spa town of national and world renown.

A fourth, more modest stream…July 4, 1916 was the unveiling of the “Fountain of Youth, now known as the Butler-Perozzi Fountain. Generous Ashland businessmen Gwin Butler and Dominic Perozzi had recently donated some of their land for the expansion of Lithia Park. Butler traveled to the 1915 Panama-Pacific International Exposition, held in San Francisco’s Marina District.  A massive event, the Exposition celebrated the opening of the Panama Canal and was attended by over 18 million people. Butler thought an Italian marble fountain he saw there would be perfect in Lithia Park, so he sent a telegram to his friend Perozzi to come immediately. When Perozzi arrived in San Francisco, he agreed to help purchase the fountain, which the two men bought for $3,000 (equivalent to about $75,000 in 2019 dollars).

Fourth, another huge, audacious tributary…the Rogue Roundup, a Wild West show to rival the already successful Pendleton, Oregon Roundup. The first Pendleton Roundup (rodeo and more) in 1910 had drawn 7,000 spectators, and it just kept growing from there. Ashland aimed to outdo their fellow Oregon town in 1916.

Fifth, a small but passionate stream…baseball fans were treated to a three-day, three-game rematch between the Medford, Oregon and Weed, California baseball teams.

Sixth, a musical stream…more band music in one place than Southern Oregon had ever heard. The Ashland band, the Medford band, the Grants Pass band and the Central Point band each played two or three times a day for all three days. They even played all together as a massed band in a grand symphony of band music.

Seventh, another bigger-and-bolder-than-Southern-Oregon-has-ever-seen stream…you can’t forget fireworks on the 4th of July. But not just one day, not even two days…three days in a row of massive fireworks! July 5 and 6 featured unusual daylight fireworks.

Finally, what made this blowout “4th” possibly the largest event in Ashland’s history was a combination of three straight days of multiple activities (each of which attracted between hundreds and thousands of spectators) with nonstop action from early morning until past midnight all three of the days.

To get an idea how big, let’s compare some numbers from 1916 with recent years. In recent years the 4th of July parade attendance has been estimated at 20,000 people. That’s with Ashland’s population currently about 21,000 and Jackson County’s population about 220,000.

That was just July 4th. Twenty thousand more came for all-day and into-the-night celebrations on July 5 and July 6.

Where did all the people come from?

From far and wide! For example, the Ashland newspaper quoted the Klamath County Evening Herald on June 1, 1916: “there will be many automobiles of Klamath people romping across the hills for Ashland” and regarding the Roundup, “Klamath county vaqueros will of course take a prominent part – and the prominent prizes.”

Most Southern Oregon cities canceled their own 4th of July celebrations in 1916 and cooperated to make Ashland’s celebration a success.  Ashland reciprocated by calling July 5 “Medford Day” and July 6 “Grants Pass and Klamath Falls Day.”

Southern Pacific railroad company was committed to making Ashland’s 1916 Independence Day celebrations a success. It was a win for the railroad, because at that time many people still visited Ashland by train. Southern Pacific railroad sent two of their Vice Presidents and their general passenger agent John M. Scott, who spoke at one of the dedication ceremonies.

Beyond this July 4th bash, Southern Pacific was committed to helping Ashland become a popular resort town, as that would increase their passenger train business long term.

Here is one small example of Southern Pacific’s largesse. Local professor Henry Gillmore wrote a song called “Ashland the Beautiful.” The front and back covers of the sheet music described Ashland as “Oregon’s Famous Spa.” In addition, the back cover promoted Crater Lake National Park and Josephine County Caves (now Oregon Caves National Monument). Southern Pacific printed the sheet music at its own printing plant. The Tidings of July 31, 1916 wrote: “Ten thousand copies of the song are to be printed immediately for distribution throughout the east, and later ten thousand more for the Pacific coast territory.”

Click here to read Part 2 of the story of Ashland’s biggest bash.

Click here to read Part 3 of the story of Ashland’s biggest bash.