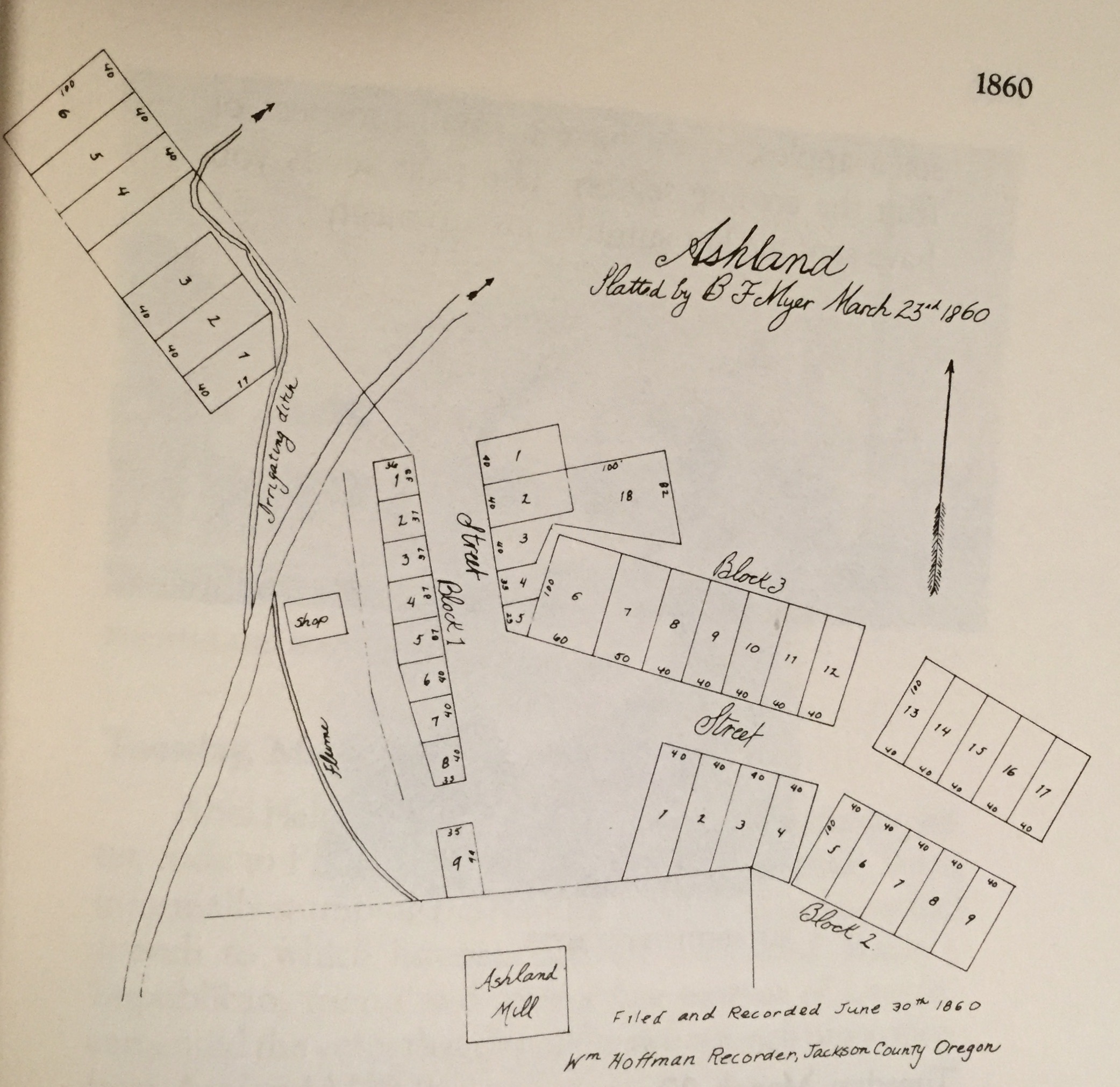 How did a 3-year-old help start Ashland School District No. 5?
Which Presidential candidate did Ashlanders vote for in 1860?
What year was the Ashland Tidings newspaper founded?
How many name changes has SOU had in its first 148 years?

Part 1 began with a brief introduction to a Native American village where Lithia Park is now located, as described by some of the first Americans who settled in Ashland. Part 1 ended with a description of the first formal schooling in Ashland. Classes began October 3, 1854 with a handful of children in the home of Eber Emery.

To begin Part 2, let’s pick up that story three years later with another surprising school story.

Three years after a handful of students began meeting for school in Eber Emery’s house, locals decided to organize a formal school district. This would enable Ashland to receive public funds to help with school expenses. Here’s how Marjorie O’Harra described what happened. “An enrollment of thirteen children was necessary to establish the district…. After a thorough scouring of the community only twelve children could be found. Pioneers being resourceful folks, three-year-old John Helman was pressed into service and School District No. 5 came into being.”

I guess you could say that John Helman was “small but mighty” with his power to bring School District No. 5 into being!

In the first three years of the tiny community, a local resident had to travel to Jacksonville’s post office once a week to get mail for Ashland, and then people picked up their mail in Abel and Martha Helman’s kitchen.

Ashland graduated to an official Post Office in 1855. Mail still came only once a week, but the post “office” moved from Helman’s kitchen to the Ashland Flour Mill office. Abel Helman was Postmaster of Ashland for the first 27 years of the local Post Office.

Ashland citizens built the first dedicated school house in 1860. About 18 students attended regularly, not many more than the 13 students enrolled back in 1857. In this photo, the students are with blind music instructor Professor Rutan, in front of the first school building.

“Ashlanders voted for Lincoln in 1860, while the remainder of the region strongly supported the pro-slavery candidate, and the town remained a dependably Republican island in a Democratic sea for decades thereafter.” [quote from LaLande, Oregon Encyclopedia]

Ashland’s first known map, drawn in 1860, showed the Plaza and one street, called “Street!” This one street was actually the Jacksonville-to-Yreka stage road.

By the time of B.F. Myer’s 1867 official map, Ashland had grown. Not only was the stage road through town now called “Stage Road,” but also there were nine residential streets shown on the map! The streets radiated out from the Ashland Plaza, and about four blocks west along what is now North Main Street. From East to West, the street names are Oak Street, Water Street, Granite Street, Church Street, Pine Street, Bush Street, Laurel Street, Manzanita Street and Factory Street (now Central Avenue).

Creating a college was a vision of Southern Oregon Methodists, which got a boost in 1869 when a Methodist conference was held in Ashland. Reverend Joseph H. Skidmore made it a reality in 1872. He used his carpentry skills to finish a half-built structure, then opened Ashland Academy for training teachers in the new building. After failing financially and then opening again in 1882, the renamed Ashland College and Normal School had 42 students and 4 teachers. At that time, it was located at what is now the Briscoe School site on North Main Street.

Today, after a total of 10 name changes (!), Southern Oregon University has 6,000 students on a 175 acre campus and is one of the jewels of Ashland.

After the Plaza fire of March 11, 1879, the Odd Fellows built a two-story structure with local bricks. To this day, their brick building anchors the corner of the Plaza, and still proudly identifies itself with “I.O.O.F. 1879” visible at the top of the building.

June 17, 1876 marked the day Ashland residents got their own newspaper, the Ashland Tidings. Before that, they got their news from Jacksonville newspapers. It began as a weekly paper and became a twice-weekly by 1896. Becoming a daily paper in 1912, the name was changed to the Ashland Daily Tidings. And what is the name now? Once again, it is the Ashland Tidings as of 2019. For a small-circulation newspaper in a small town, it is amazing that the Tidings has been able to survive for 144 years!

The band became more prominent in town after 1890, when Otis Helman was named the conductor. Helman had attended and graduated from the Chicago School of Music, so he raised the quality of the music. Under Helman, this band was also known as the “Helman Red Suit Band.”

The city band has marched in Ashland parades for more than 100 years. Even today, the Ashland City Band leads the 4th of July parade, immediately after the Color Guard.

I hope you are enjoying this series of brief vignettes of Ashland history “firsts.”

Here is a link to Part 1 of the series:

Part 3 will introduce you to the first United States President to visit Ashland, the first “shopping mall” in town, the first play performed by Oregon Shakespeare Festival, and more.

As his contribution to building community, Peter Finkle is walking every street in Ashland and writing an article with photos about every street.  Please subscribe with your email address, and you will be notified each time a new article is published.