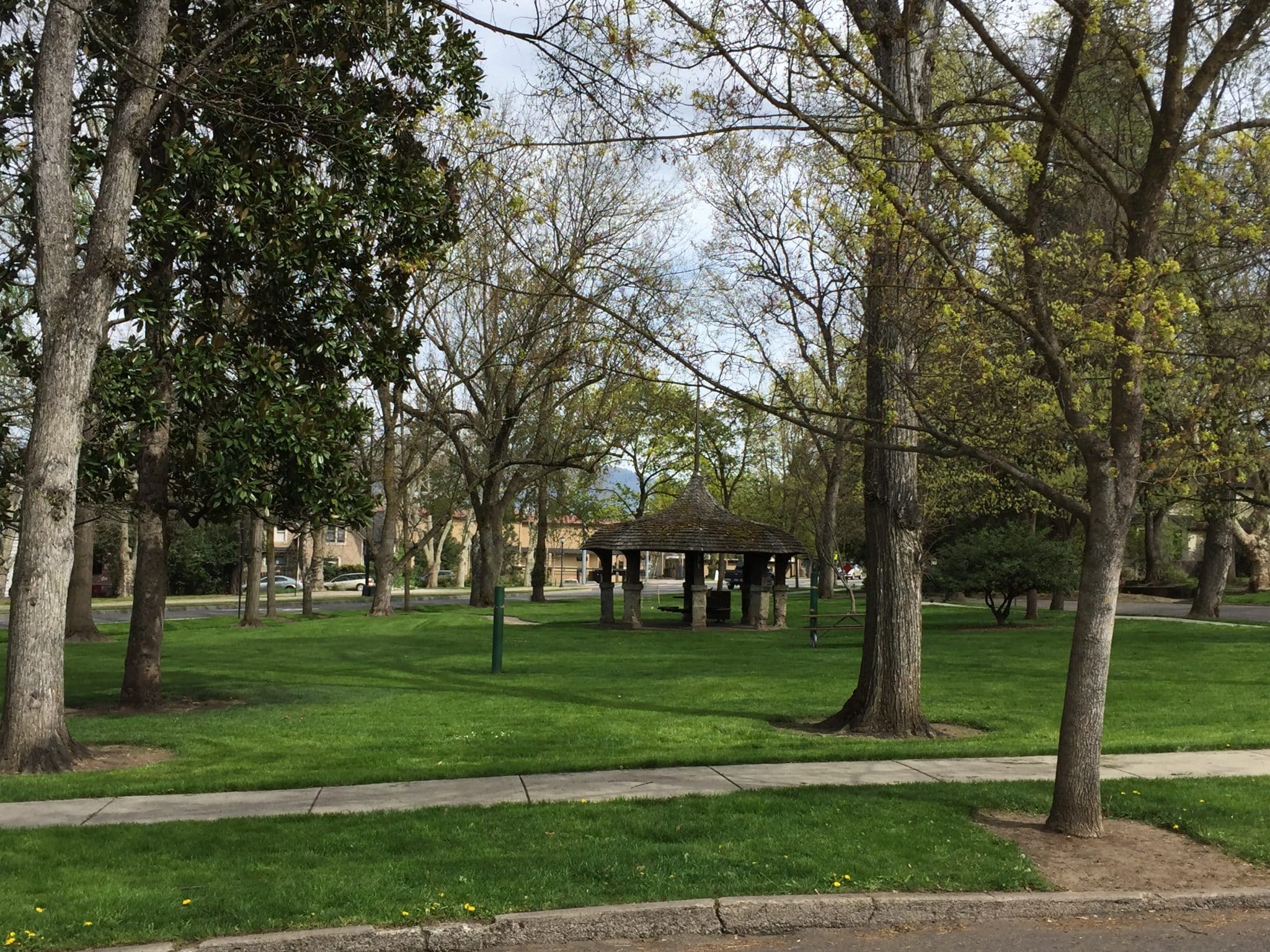 The house that moved one block.
How can Liberty Street start and end at Siskiyou?
Two Little Free Libraries…and ending with humor.

This is a greatly expanded version of my April 2018 Liberty Street article. Liberty Street has an Ashland Tree of the Year, architecture from historic to modern, not just one but two “Little Free Libraries,” and access to Ashland’s extensive trail system.

Here’s how Liberty Street can start and end at Siskiyou — it goes from Siskiyou Boulevard to the Siskiyou Mountain Range.

You might have wondered why this tiny, triangular park is here. Marjorie O’Harra in her book gave credit to Ashland’s newly formed Woman’s Civic Improvement Club. Formed in April 1908, this large group was described by the Ashland Tidings at the time as promoting “civic improvement agitation.” That agitation led to the creation of Lithia Park, among other accomplishments. But that is another story.

According to O’Harra, here is the Triangle Park story: “When the Temple of Truth Society announced plans to build a structure on Siskiyou Boulevard — on a triangle lot between Beach and Liberty Streets — the ladies believed such a building would ruin the view from the homes on Iowa Street, so they bought the land for $550 and developed it into a park.”

The Temple of Truth Society ended up building its church in 1909 or 1910 on Siskiyou Boulevard, where the expanded Fire Station #1 is now located.

Triangle Park tends to be quiet.  You might see high school students eating lunch in the charming gazebo during the school year, or young people walking slack lines attached to the posts in the park.  The one day Triangle Park comes alive with a “boom” and a “bang” is the 4th of July.  When Ashland’s huge Independence Day celebration rolls around, parade headquarters is at Triangle Park.  It becomes a beehive of organizers, marching band members and honored guests ranging from locals, to Oregon’s U.S. Senators, to our Sister-City Queen and city council members from Guanajuato, Mexico.

At the corner of Alaska Street, Joseph and Janie enlisted some of their friends to turn a large lot into a beautiful cooperative vegetable and fruit garden.  Let’s see how many of the fruits in their garden I can remember: cherries, blueberries, raspberries, mulberries and gooseberries.  Yes, they like berries.  Sorry, they are not for public consumption!

Joseph and Janie are both massage therapists with the business name Advanced Myotherapy.  Janie also teaches Eden Energy Medicine all over the world, but I have benefited from her healing skills in both massage and energy medicine, without going any farther than Liberty Street.

They have the most amazing camellia bush I have seen in my life, and I have seen many.  Is it still a “bush” when it’s two stories tall?  The dramatic two-story camellia is hard to see from the street, so I am including photos of it here, taken in April 2018.

According to the National Register description of historic properties in Ashland, “the Whitaker house [at 285 Liberty Street] is a fine example of the bungalow style, with the shallow pitched roof, broad eaves, large porch, massive posts and brackets and other elements of the style.”

Anyone who walks or drives on Liberty Street will remember this colorful house. Some people love it and some think it sticks out like a sore thumb. I’m in the “love it” camp. Traditional neighborhoods where all homes are built in the same style or similar colors can be aesthetically pleasing. But there is freshness that comes with variety, and Liberty Street has variety.

I would like to point out the beautiful, colorful tulip garden in the front yard of this colorful house, at its peak in early April.  Notice the deer fence, without which the tulip garden would not exist.

I may go on a rant about the Ashland deer from time to time as I write my Walk Ashland articles.  The number of plants that Ashland deer do not eat seems to be shrinking from year to year.  For example, during the first 15 years I lived in Ashland, the deer did not touch the Hypericum or Star jasmine in my front yard.  Now they eat both, and I have even seen them nibble on ivy!  At least rosemary, lavender, daffodils and iris seem to be safe for the present.

Though this house is not set far back from the street, the dense vegetation gives it a secluded feel. I especially like the entry arbor and vines.

This house moved one block

John and Artemisia Easterling moved from Kentucky to Ashland in 1903. During the next few years, he bought and sold properties and businesses around town, especially in the Railroad District. In 1909, the family bought an orchard with a home on Beach Street. They lived there until 1925, when they sold the property to the school district for construction of Lincoln Elementary School. This was to be a training school for teachers educated at nearby Southern Oregon Normal School (now Southern Oregon University), which reopened in 1926.

The Easterlings then purchased a lot one block over on Liberty Street and decided to move their Beach Street house to the new location. Easterling was known as a wheeler-and-dealer. He decided to upgrade his house when it was moved. He found a college building that was being demolished and purchased the columned porch of the building. You can still see it at the front of this Liberty Street home.

I met homeowner Bill Quassia as I was taking a photo of his historic 1921 house at 390 Liberty Street. It was in bad shape when he got the house, so he had to do major work on parts of the ceilings and floors. In the older part of the house, he was able to keep the original wood floors and original horsehair-infused plaster interior walls. Yes…horsehair. One hundred years ago, hair from the mane and tail of horses was used in making plaster for walls. These long, strong horsehair fibers provided strength and stability to the plaster.

A previous owner of the house, Louise Antz, moved to Ashland from New York. She had been the Chair of the Department of Education at New York University. According to Bill, she realized her dream of “living out West” when she retired from teaching. She is the one who enclosed the old porch. Doing so created a hothouse room for growing orchids and other tropical flowers.

Look closely at the 1972 photo above that I am holding in my hand. Do you see the variegated-color window shades behind the two ladies? Now look at the blinds on the current porch, just above the 1972 photo. If they look similar, that’s because they are the same blinds! As with the photo, Bill found them in the old barn/garage behind the house as he went through boxes of possessions Louise Antz had left behind.

Can you see the tree?

This made my jaw drop, so I want to share it with you. As we were standing out in the front yard, Bill pulled the photo above from the box of old photos Louise Antz had left in the house. He had me look at the tiny tree just behind the man with his shirt off. I thought to myself, “okay, that doesn’t look like much.”

Then Bill said, “Look at that,” as he pointed to a nearby tree. “What!,” I exclaimed as I put two and two together and realized the connection. Take a look at the photo below and see if you make the connection.

I expect you figured it out by now. That is the same tree! It is now 50 years old, very tall and very healthy.

Liberty St is home to two other trees that caught my eye. The first, at 391 Liberty Street (the house moved from Beach Street), was Ashland’s 2001 Tree of the Year. Each year residents nominate favorite trees around town, the Tree Commission narrows the selection to a few, and then residents vote for their top choice. The 2001 choice was a majestic Blue Atlas Cedar. My photo through the electric wires doesn’t do it justice. I hope you will see it for yourself.

The other tree, toward the top of Liberty, is a very unusual Ponderosa pine.  Most Ponderosa pines I see are straight as an arrow, reaching for the sky.  Not this one.  It forks, and then forks again.  With tall trees, I have read that a lightning strike can destroy the crown of the tree and lead to a forked top as the tree strives to continue growing. This tree looks like it just decided to be different.

Ascending Liberty Street, I took photos of houses with contrasting architectural styles, showing the variety of houses on Liberty.

If you like traditional, here is one of the original farm houses on Liberty Street, built in 1886.

“The Road Goes Ever On and On”

Finally, arriving at the top of Liberty Street, you have the option to leave the city streets for the world of trails.  From here, you can connect with a variety of trails and forest service roads that will take you almost anywhere.

As Bilbo said to Frodo in Lord of the Rings: “It’s a dangerous business, Frodo, going out your door. You step onto the road, and if you don’t keep your feet, there’s no knowing where you might be swept off to.”

From the top of Liberty Street, as well as from many other streets in Ashland, you can follow trails to the top of Mt. Ashland. If you are really swept off your feet, you could end up walking all the way to Canada or Mexico on the Pacific Crest Trail.