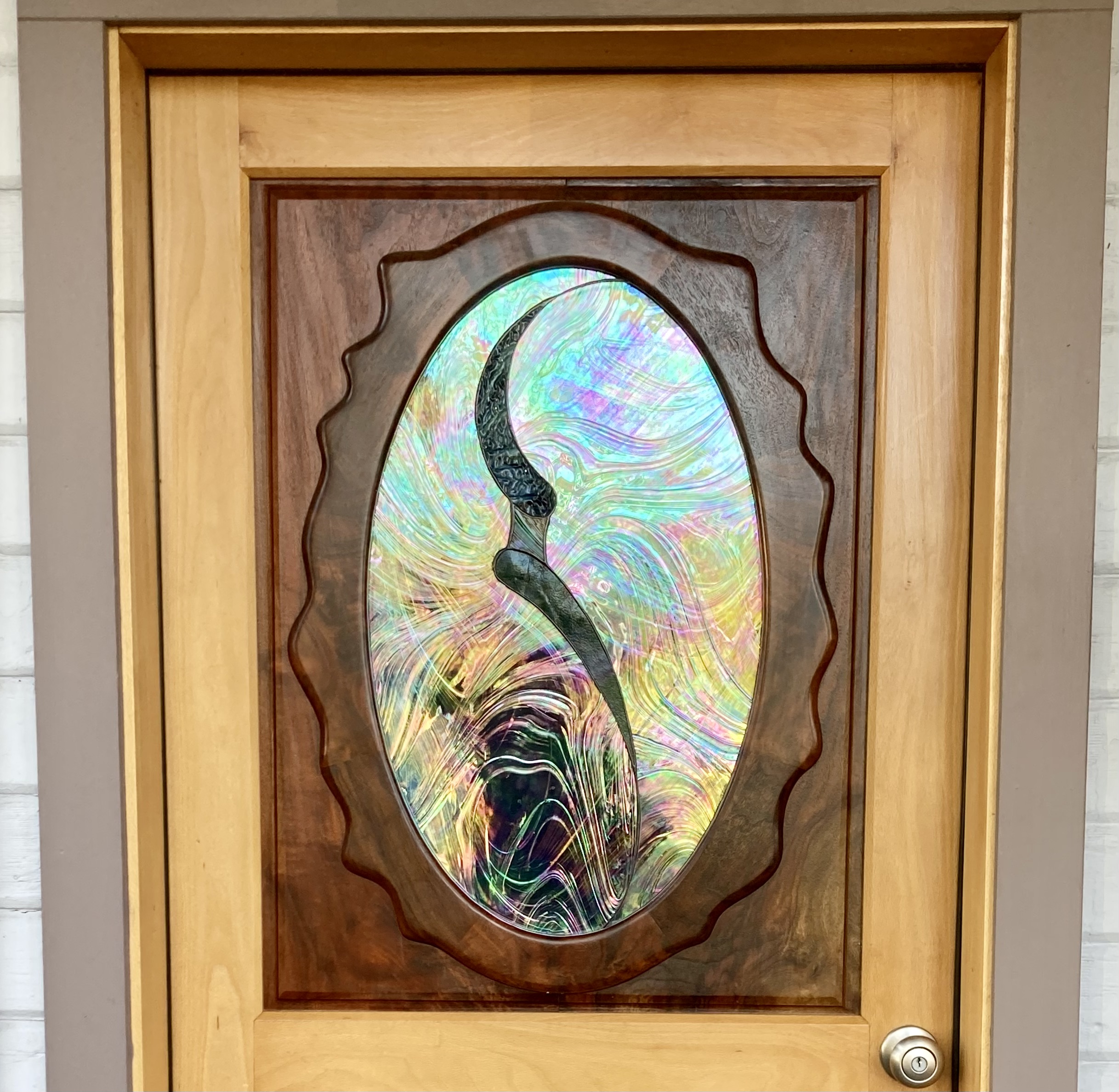 Before the railroad, Third Street did not exist

Before 1883, the city of Ashland was very small, as you can see from this 1879 map of the town. Taking Main Street northwest from the plaza, the town extended only a few blocks to either side of Main Street as far as Wimer Street. Heading southeast on Main Street from the plaza, people reached farmland after only two blocks! The red arrow on the map points to the Plaza, so you can orient yourself.

Third Street was created in 1884

The railroad coming south from Portland had ended at Roseburg since 1872. By 1883, continued construction brought it closer and closer to Ashland. Excitement in the community was rising. Early pioneer Lindsay Applegate sold 156 acres of his land to the Oregon & California Railroad in October 1883. The company (later purchased by Southern Pacific Railroad) laid out streets and property lines in what became known as the Railroad District. Third Street was part of the first Railroad Addition in 1884, which included only First Street to Fourth Street. The Railroad District’s second half (Fifth Street to Eighth Street) was added to the town in 1888.

Twenty two of the homes on Third Street were built between 1896 and 1912, as Ashland’s population boomed due to the coming of the railroad.

Impact of the Railroad

The first passenger train south from Portland rolled into Ashland on May 4, 1884. There was a large community celebration with speeches by local dignitaries and music by the Ashland Brass Band (precursor to today’s Ashland City Band). The Ashland Tidings noted on January 2, 1885, that 89 new houses and 33 other buildings had been constructed in 1884 alone!

A few years later, train tracks were completed over the Siskiyou Mountains. The first train from San Francisco arrived in Ashland with great ceremony on December 17, 1887. Due to Ashland’s site at the base of the rugged mountain range, Southern Pacific Railroad made Ashland both a train stop and a maintenance yard.

Dozens of new railroad workers chose to build, buy or rent homes in the Railroad District near the train station. Among the houses on Third Street owned or rented by railroad workers are 253 Third, 155 Third, 142 Third and 117 Third.

Most of the early homes built here were small, wood-frame one story or one-and-one-half story structures. The oldest existing house on Third Street, ironically one of the largest, was built in 1896. You will see examples of many modest houses: four from 1899, five from 1900, three from 1901 and two from 1902.

I love this Third Street story of the Railroad District “old days,” told by Marie Prescott:

“For many years there were two Railway Express offices in Ash­land, one at the depot and one on Main Street. At train time a wagon and team [of horses] drove from Main Street to the depot to pick up deliveries. For many years the train schedule didn’t vary and Mr. Turner’s team learned the schedule. Occasionally when the train was late and Mr. Turner did not come out to make the run at the usual time, the team would start off alone. Marie remembers, ‘We’ve seen them go down Third Street just having a good time, taking the wagon back to the depot. We were ex­cited of course–horses without any driver.'”

Starting at A Street

Let’s begin with 266 Third St, a simple bungalow style house built in 1901 for local grocer Frank Davidson. As seems to have often happened in the early 1900s, Davidson only lived here for one year before selling the house. The National Register says that the house retains its historic character, though the siding and front porch are not original.

265 Third St was built in 1902 for S. I. Whitmore, who only owned it for two years. The National Register calls it “a simple hipped-roof structure,” built in the vernacular cottage style.

I like the simple yet elegant design of the front door.

258 Third Street is another one-story bungalow house, built in 1910 as a rental house. James Corbett, who lived next door at 248 Third Street, was the original owner.

What kind of tree is this?

I was impressed by the interesting tree in the front yard. The many intertwined branches almost look like multiple trunks. As odd as the lower part of the tree is, the small branches lush with leaves atop the tree look hearty and healthy. I think this tree is an Orange jasmine, botanical name Murraya paniculata.

It’s time for some stories

In September 1901, the Ashland Tidings reported that “Mrs. R. Beswick is building two cottages for rent on 3rd Street between A and B Streets.” The “two cottages” are 257 and 253 Third Street. Both have stories told to me by their current owners.

Years ago, I noticed this house because the hand-carved wood mailbox (on the right in this photo) was mounted on a post next to the sidewalk. Now by the front door, it is a unique and amazing mailbox. More recently, I have been struck by the beauty of the front door, another work of art.

I was able to speak with Stu Davies, the homeowner, to learn about the creation of both mailbox and door. He began by telling me that the mailbox was made from a small oak tree. “This piece of wood here, for the mailbox, came from a very special tree that I found a very long time ago. I was planting trees in the Sierras in California back when I was in my 20s. I was out looking for firewood one day when I found a standing dead oak tree that had this amazing shape to it. I thought, ‘I can’t cut this up for firewood, but I can’t leave it here either. It’s too beautiful.'” He brought it home and cut one section of the trunk to make the mailbox. The inside was partially hollow already, due to decay.

He used a chain saw – very carefully – to carve out the inside of the mailbox. Then he followed up with chisels, sanding, buffing and many coats of protectant to get the mailbox looking the way it does today. People walking by his house have loved it for years, he told me.

We transferred our attention to the front door. Stu did all the woodwork himself, combining the beauty of local black walnut that he milled himself with light colored beech wood. Stu told me, “I’ve been a woodworker for most of my life, and I love working with wood. But I’ve never attempted to do anything this involved. This is all made with mortise and tenon joints.”

He went on, “The connections are all hidden on the inside of the joints. You don’t see them at all. It’s got to be cut very meticulously, it’s got to fit perfectly, all these little angles. There’s a million places to make a mistake!” As I listened to Stu, I gained increased appreciation for the detail and beauty of the wood. Previously, what I had noticed most was the stained glass insert, which he described next.

“The glass is my own design, though I didn’t do the glasswork myself. I used to drive back and forth to Central America every year. I visited an amazing town in Mexico where they have all kinds of crafts people. I found a stained glass shop there, where they do custom windows. I had him make six windows in all, two each of three designs.”

“I found the stained glass, made by a company that has since gone out of business – Spectrum Glass Company. This is their “iridized Baroque” glass, which you can’t find anymore. What really makes this design pop is that there are two layers of the glass in the door.” If you look closely at the window, see if you can find two different flowing patterns from the two layers of glass.

When I talked with Stu’s next-door neighbor, Jerome White, he made me laugh with this story: “Here’s my favorite quote about our neighbor Stuart’s mailbox. My younger son, when he was about five or six years old, said ‘When I grow up, I want a mailbox just like Stuart’s.'”

253 Third Street is the second rental cottage built in 1901 by Richard Beswick and his wife. It was renovated in 1994. I talked with homeowner Jerome White, who for years had a busy architectural practice in the San Francisco Bay Area. After he and his wife moved to Ashland, they bought 253 Third Street with the intention of renovating it. Once in Ashland, Jerome became a principal in the busy architectural practice now called KSW Architects. He recently retired from the firm.

Renovating an old house comes with challenges and surprises. A big challenge was the house’s lack of a foundation, a common problem of houses built in the era around 1900. Jerome described the first step as digging. They called on a local known as “Tattoo Tommy” to do the work. He was also known as “the digger” because of all the foundations he dug for Railroad District home renovations. As his nickname implies, Tommy was covered with tattoos. He also had a fierce, pirate-like appearance that scared people who didn’t know him. Jerome smiled as he said that underneath the appearance, Tommy had a kind, gentle heart.

Jerome’s biggest surprise was finding that the exterior walls were only 2 ¼” thick. The walls had been built in 1901 using 1 x 12 vertical wood planks, sometimes called barn-boards, which was common at the time. An outside layer of siding was original, and a thin fiberboard had been added on the inside sometime in the mid-20th century.