Railroad Park and History of the Railroad in Ashland 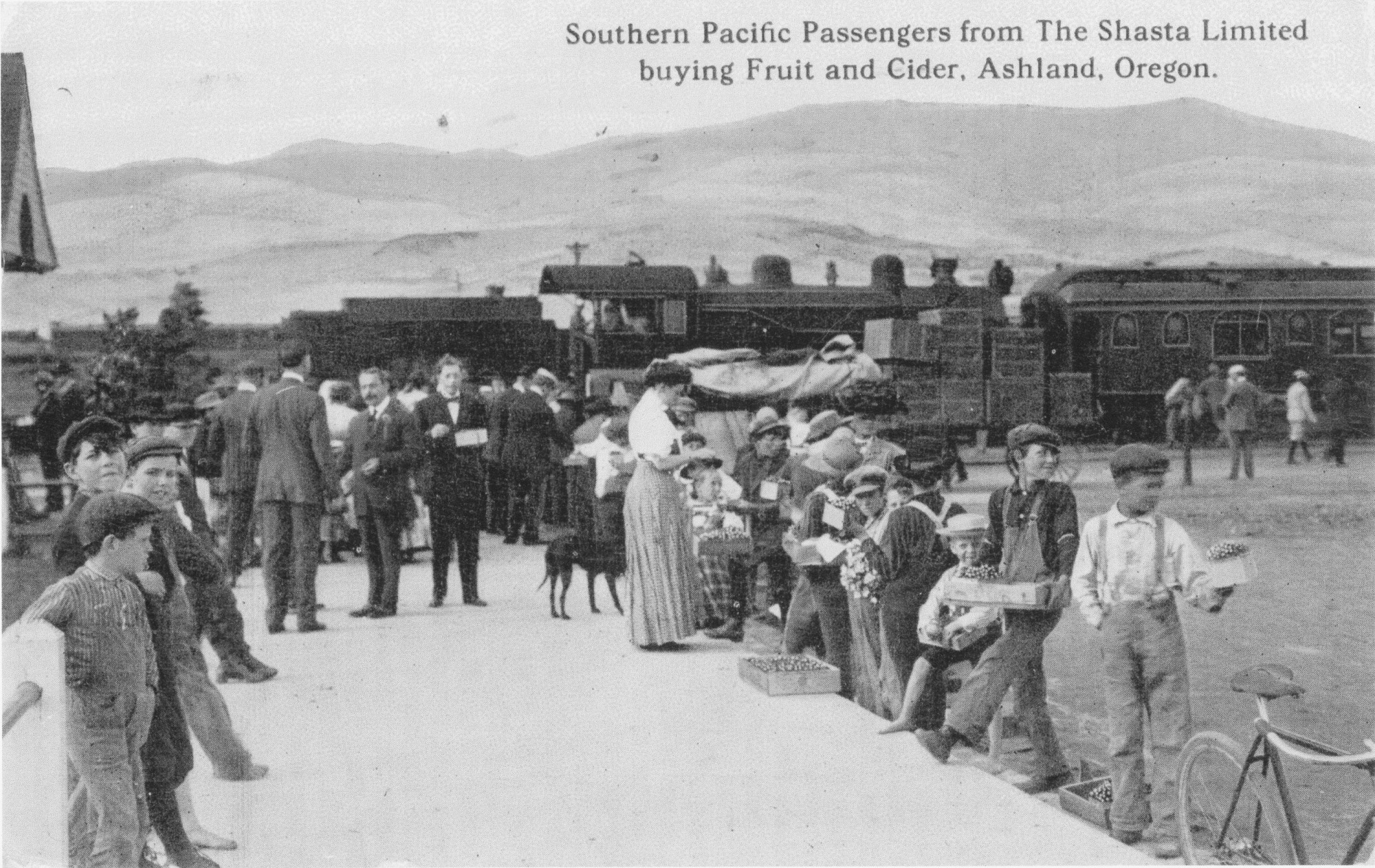 28 Aug Railroad Park and History of the Railroad in Ashland

Railroad Park memorializes the history of this part of town.  Before airplanes and airports, before automobiles and interstate highways, there were railroads and railway stations.

Huge Impact of the Railroad in America

How did Americans get around before the railroads?  They walked. Or if they were fortunate, they rode in a simple or fancy cart of some kind pulled by horses or oxen over dirt roads.  Whether it was simple or fancy, it was slow – and uncomfortably bumpy – and either dusty or muddy (take your pick).

According to the Northwest Railway Museum site, “The journey west ~ 2,400 miles and 4-8 months ~ was reduced to a mere week or two following the completion of the first transcontinental railroad.”  Imagine living at the time when this huge cultural change was happening.

There was fierce competition among cities and towns across the country for a railway stop, because towns thrived when they were awarded a station as the tracks were laid.

That is why May 4, 1884 was such an important day for the small town of Ashland, Oregon.  That is the day the first train arrived in Ashland, coming in from Portland.  At this time, tracks had not yet been built across the Siskiyou Mountains.

First train to arrive in Ashland (from Portland) on May 4, 1884. (photo from the Terry Skibby collection) NOTE added September 2020: Scott Hartley contacted me because he has a beat up copy of this photo with the names of the three men written on the back. On the back of his photo it says: “Engineer D. McCarthy, Fireman James Porter, and Herber McCarthy sitting on running board of engine. About 1884”

Photo of the last stagecoach carrying train passengers from Ashland to Northern California, in the last day before the first train arrived in Ashland from the south. (photo from the Terry Skibby collection)

The Golden Spike in Ashland

The Railroad District got an even bigger boost when California and Oregon were linked by rail on December 17, 1887.  Here is the plaque in Railroad Park commemorating that event.

The driving of the “Golden Spike” by Southern Pacific executive Charles Crocker brought brief national attention to Ashland, because that day marked the completion of railroad tracks around the perimeter of the continental United States.

More important to the economy and growth of Ashland, the town was now a meal stop on the busy rail service linking San Francisco and Portland.  For years, up to four trains a day stopped in Ashland.  In addition, Ashland was a good spot for Southern Pacific to locate many of its crew.

“75 company men made their homes here” in the early 20th century, wrote Marjorie O’Hara in Ashland: the first 130 years.  I bet you can guess where most of these men lived with their families…yes, in the Railroad District.  That was a lot of money flowing into the local Ashland economy. 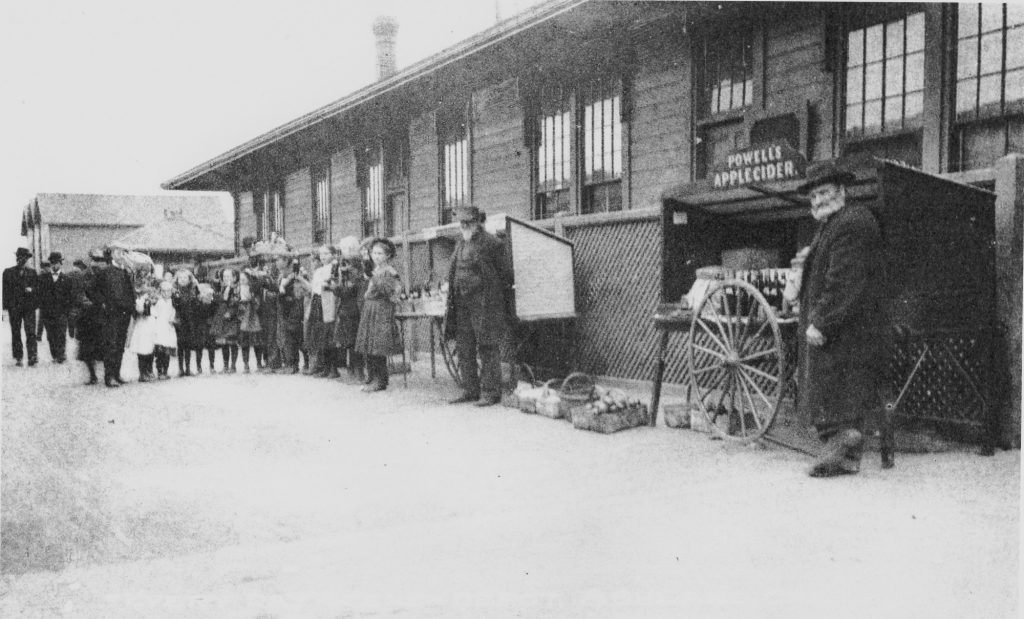 Historic photos show bustling scenes filled with travelers and peddlers around the railroad depot.  William Powell was one of the most successful Ashlanders at serving the stream of train passengers.  He lived at 462 A Street with an apple orchard on his property behind the house.  You can still see his apple trees (or descendants of his trees) from the Peerless Hotel parking area in the alley just behind the Peerless.

William Powell had a cider press along the alley just off 2nd Street and a confectionary shop at the corner of A Street and 4th Street.  For many years, he and his apple cider cart were a fixture near the railroad depot.

Interviewed in 1978*, he stated that he moved to Ashland with his family in 1919.  Talking about local fruit, he said: “My brother and I also had a lot of cherries at our old house and we used to bring them in little paper boxes and sell those to the people for 5 cents.” 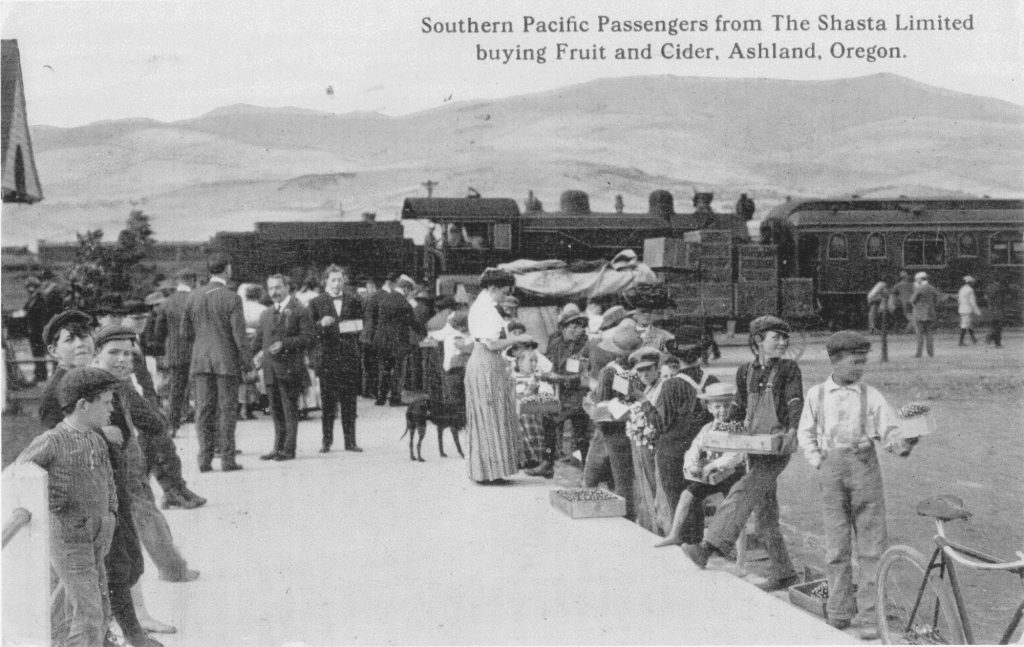 But he and his brother sold a lot more than just fruit.  Albert talked about their creative way to make money from the free Lithia Water.  At the time, train passengers could sample Lithia water from a fountain located at A Street and 4th Street.  The fountain was enclosed within a gazebo similar to the one currently in Lithia Park near the band shell.

Albert Meyers: “My brother and I had a job delivering newspapers.  We delivered down at the train station too.  That was where all the activity was.  Everything happened at the train station.  Whenever a train came in, all the passengers would get off and drink some Lithia water, either liking it very much or not liking it at all.”

“My brother and I had a good business going.  They didn’t have any cups down there and the fountain wasn’t fixed like a normal drinking fountain, so it was hard to drink from.  My brother and I bought some cups from the five and dime store.  Every time a train came in, we’d sell them cups for 5 cents so they could get a drink.  We had a great big long board that the passengers were supposed to put their cups on when they got through drinking the water.  We would set them there to dry, and then, when the next 100 to 150 people came, we would use the same cups again.  We made a good amount of money in several years just using used cups.” 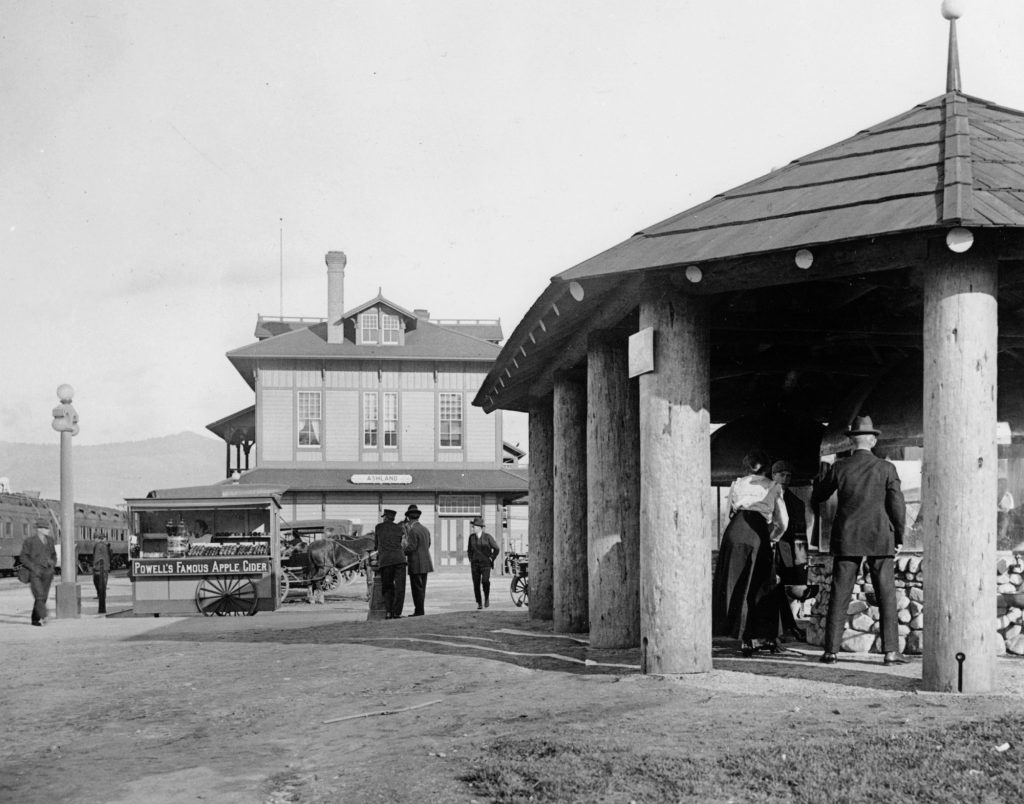 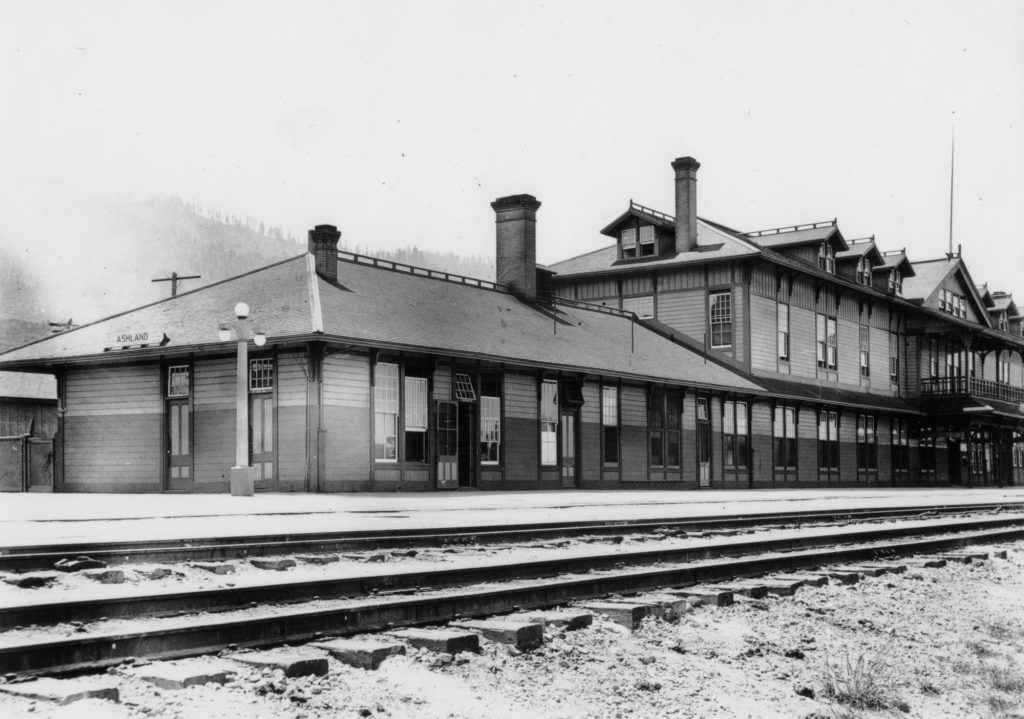 The hotel, built in 1888 to serve the passengers between San Francisco and Portland, had a huge dining room to accommodate a train full of passengers eating all at once.  It also provided rooms to rent and a depot for purchasing train tickets.  Sadly, the hotel was torn down in 1937.

All we have left of the impressive Ashland Depot Hotel is the small, historic depot building at the corner of A Street and 5th Street.  To give you a sense of the scale of the original Ashland Depot Hotel, the surviving building (below) was originally a kitchen connected to the hotel.  It is now across the street from its original location, a bit lonely without the huge hotel seen with it in the photo above.

The havoc they caused in the late 1800’s and early 1900’s was regularly described by our local papers. I will write about the hobos in another article.

What are these hunks of concrete? 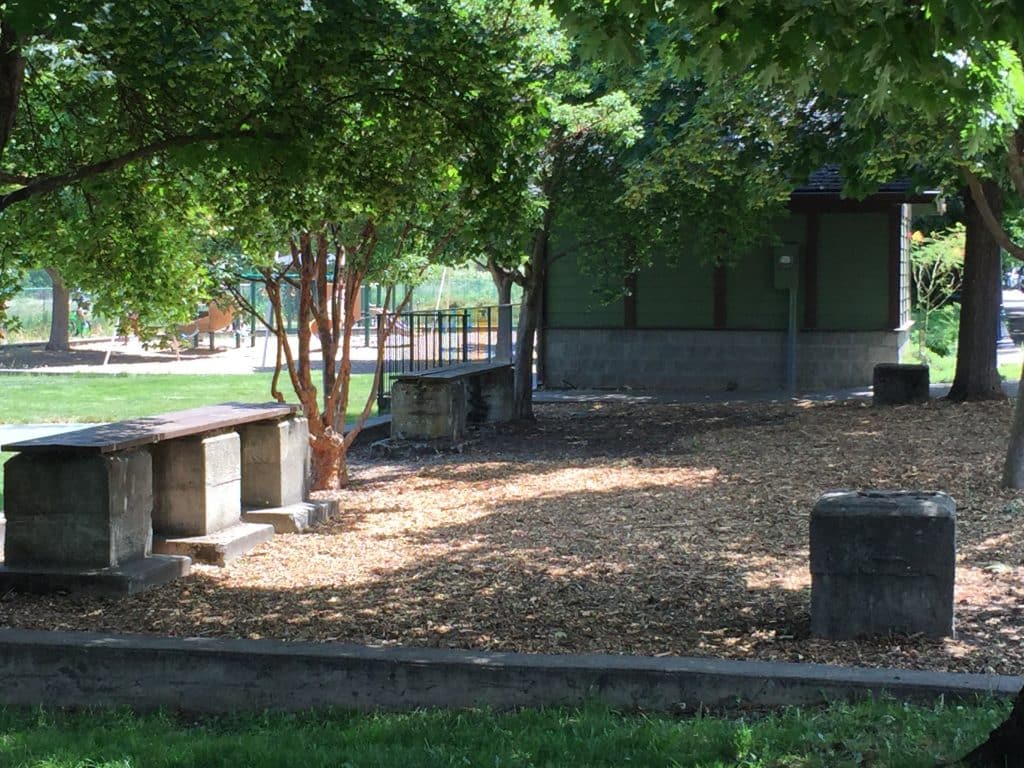 Only a few concrete piers (now holding benches) remain of the dozens that used to fill this space. (photo by Peter Finkle)

This small area of Railroad Park was once filled with these sturdy, square concrete piers.  Most were removed when the park was created, but a few were left as bench supports and for historical interest.  The photo below gives a hint of their original purpose.

The numerous concrete piers served as the base for two large water towers built next to the tracks.  These water towers served the Southern Pacific trains, as did the maintenance sheds and the huge engine turntable that can be seen in the photos above and below. 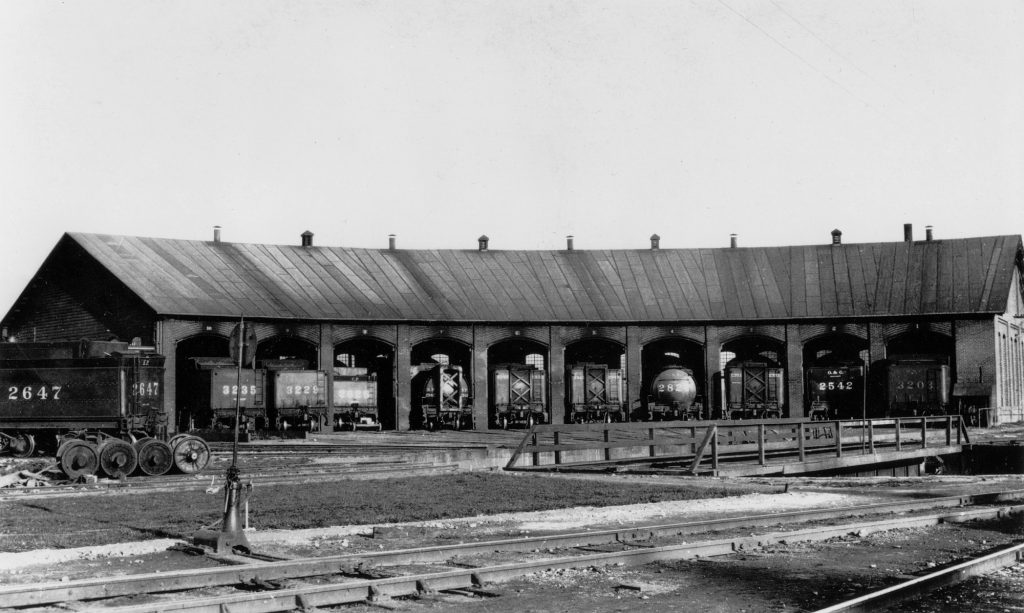 The “Glory Days” are Gone

Those glory days for the Railroad District took a beating when Southern Pacific re-routed most railroad traffic away from Ashland over to Klamath Falls in 1927.  The railway across the Siskiyou Pass was always very steep, slow and dangerous.

When Southern Pacific built a faster, safer route that bypassed Ashland, the Railroad District fell into decline. First, Ashland lost trains full of passengers stopping to stretch their legs and have a bite to eat – or to stay for a few days.  Second, Southern Pacific relocated most of their crew members who lived in Ashland to other cities, so the economy and liveliness of the Railroad District took a beating with that loss as well.

Limited passenger service continued until 1955, when passenger trains to Ashland were discontinued.  Since then, many have dreamed of reviving passenger train service, but so far it’s just a dream.

As we know, the Railroad District has bounced back big-time in the last 20 years, but that is another story for another day.

You might still hear a train whistle, and see the train come through Ashland once a day with some lumber or empty train cars.  I happened to be at the Railroad Park one Friday morning with Terry Skibby when this Central Oregon Pacific train rolled by.

My thanks to Terry Skibby for historical information and historical photos, the book Ashland: the first 130 years by Marjorie O’Hara, the book As It Was by Carol Barrett and the Ashland Public Library.

*The interview with Albert Meyers was conducted by 8th grade student Laura Howser, and printed in the 1978 book A Bit of Old Ashland, page 67.  This book and other Ashland history books are available at the Ashland Public Library.

The Southern Oregon Historical Society is a great resource.  (1) If you like history, SOHS can always use volunteers to help with research, digitizing and transcribing. Learn about SOHS here.  (2) Second, I encourage you to join SOHS as a member to support their work.  The JOIN link is here.