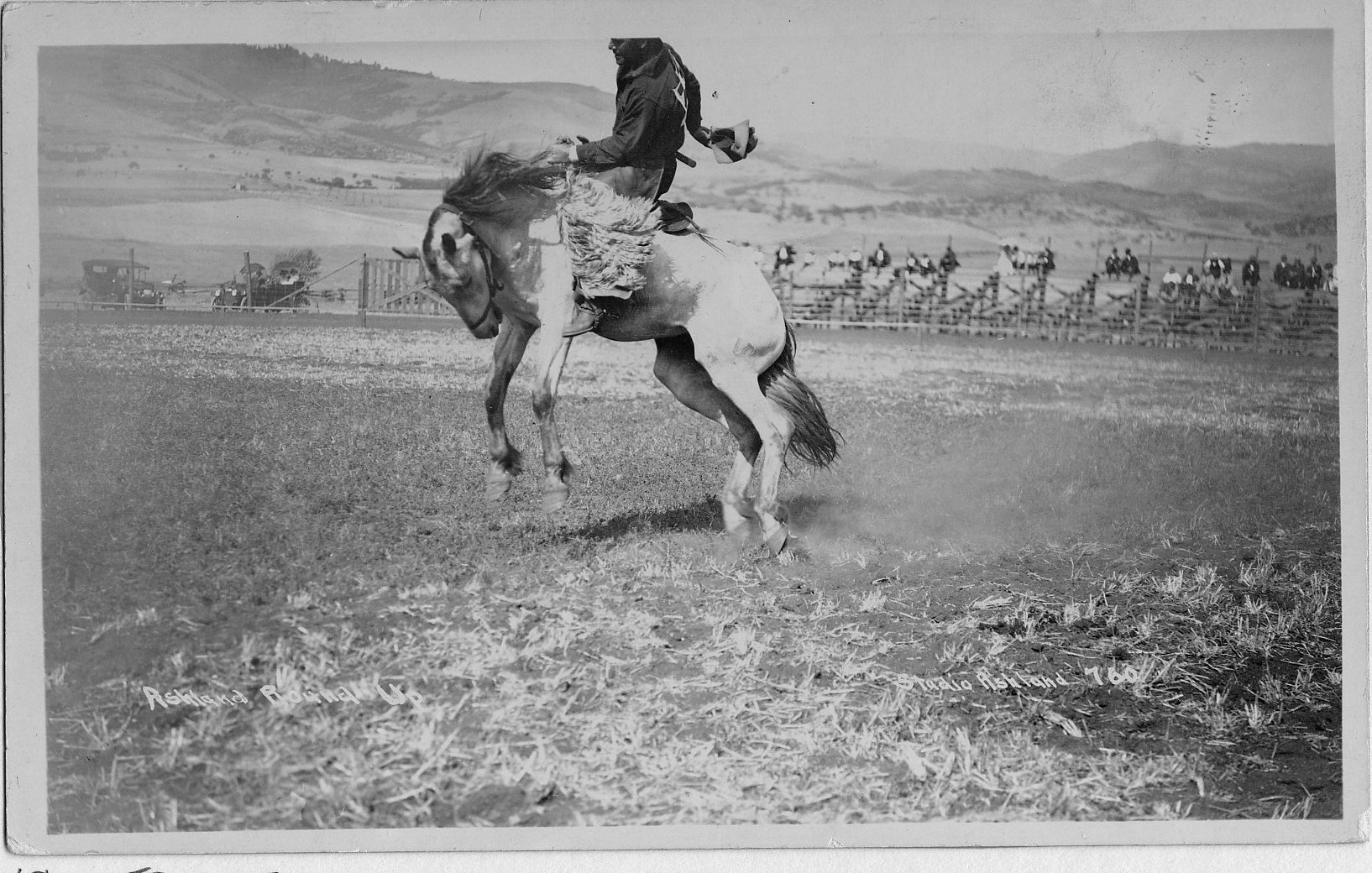 Ashlanders thought big in 1916. Southern Oregon had never seen anything like this before. Rogue Roundup promoters brought in three train cars full of bucking horses and quarter horses, plus steers for roping, wrestling and riding. The horses and steers came from Pendleton, Oregon, home of the very successful Pendleton Roundup since 1910. Pendleton also sent many cowboys, cowgirls and Native American riders. More horses and riders came over from Klamath County.

The Roundup was held at the Butler-Walker property just east of Ashland. As of 2021, this property is still an open field, located where Walker Avenue meets East Main Street. Like the parades, band concerts and baseball games, there were three days of Rogue Roundup on July 4, 5 and 6. A grandstand was built that would hold 10,000 people. The grandstand overflowed on day one and was nearly full on days two and three. Here’s a clue as to why: According to the newspaper, the Rogue Roundup was “the wildest exciting series of entertainments ever staged in the valley.”

**Cowboys and cowgirls half-mile pony racing.
**Cowboys on bucking horses. “Donal Cannon of Pendleton, a sixteen-year-old boy, won the $300 saddle, first prize in the bucking contest, over 78 entries.”
**Not only bucking horses, but also bucking burros and bucking calves.
**Even a lady bucking horse rider, “Dorothy Morrell of Klamath Falls, champion lady bucking horse rider of world.”
**A mile-long pony express race, with cowboys switching between two horses.
**Steer roping, with the steer getting a 50-foot start on the ropers.
**Steer bull-dogging (jumping off a horse at full speed and wrestling a steer to the ground).
**Bull riding, with riders using saddles.
**Indian relay race.
**Female Indians half-mile pony race.
**A horse-mounted tug of war, with teams of four saddle horses each.
**How about this one…”Cowboy Roman race. Two horses each, rider to rise 50 feet from start.” [I wish I had a photo of that to show you.]
**Just for fun, the “drunken ride” and fancy riding by Walter Seals of Pendleton.
**And finally, the “slick ear horse race.” The newspaper described it as: “Wild horse to be given 40 feet start. Cowboy to rope, catch and ride, without saddle or bridle.”

Ashland organizers were excited that they were able to contract for a party of ten Umatilla Indians from Northeast Oregon, who brought their families.
The Ashland Tidings described the Native Americans who participated in the Roundup this way: “These Indians have the most beautiful Indian costumes of any of the Oregon tribes and will come with full outfits. The head chief’s headdress, robes and so forth are ornate with beads and Elks’ teeth and are all together valued at $10,000. The Indians are all high-class athletes and will make the white cowboys hustle in all the events in which they enter. Sub-Chief Gilbert Minthorne will be in charge of the party.”

Postscript on the Roundup

It was such a success that the organizers decided to make it an annual event. They formed a stock company, with many locals investing $25 to $100 each. Organizers arranged a five-year lease for the land on which the 1916 Roundup stands and track were located. They built a larger covered grandstand and improved the grounds for 1917. The 1917 Roundup was very successful, with even greater attendance than in 1916. However, it went downhill from there and did not survive as an annual event.

As the afternoon Rogue Roundup was drawing a full house of spectators east of downtown Ashland, others had the option of water sports at the Natatorium indoor swimming pools or band concerts in Lithia Park.

At the Lithia Park main bandstand, three bands played through the afternoon of July 4. First the Central Point Band played, followed by the Medford Band and finally the Grants Pass Band.

Unveiling of the new Fountain in Lithia Park

Then at 8:00 P.M., people attended the unveiling of a beloved fountain in Lithia Park that we still enjoy today. On July 4, 1916, it was called the “Unveiling of the Fountain of Youth.” We know it as the Butler-Perozzi Fountain.

Opening the ceremony, the Medford Band played again! Professor Vining gave some remarks to dedicate the fountain and statue. Finally came the unveiling of the Fountain of Youth by 12-year-old Lucile Perozzi, daughter of Domingo and Louise Perozzi, assisted by the “flower girls.”

Here is how the Ashland Tidings of July 6, 1916 described the fountain: “The fountain is made of beautiful Verona marble. The figure is that of Cupid playing with a swan. These words are inscribed on the fountain: ‘Flori di peshi,’ [should be ‘Fiori di peshi’] which is the Italian for ‘Flower of peaches.'”

How did this fountain and statue find its way from the Florence, Italy studio of sculptor Antonio Frilli all the way to Ashland, Oregon? It came by way of the 1915 San Francisco Panama-Pacific International Exposition.  Two Ashland friends and businessmen, Gwin Butler and Domingo Perozzi, had recently donated some of their land to the expansion of Lithia Park. Butler traveled to the 1915 Panama-Pacific International Exposition, held in San Francisco’s Marina District.  Similar in size to a World’s Fair, the Exposition celebrated the opening of the Panama Canal and was attended by over 18 million people.

Many objects displayed at the Exposition were available for purchase at the end of the fair. Butler thought this Italian marble fountain he saw there would be perfect in Lithia Park, so he sent a telegram to his friend Perozzi to come immediately. When Perozzi arrived in San Francisco, he agreed to help purchase the fountain, which the two men bought for $3,000 (equivalent to about $75,000 in 2019 dollars).

The fountain unveiling ceremony concluded with Ashland Mayor O.H. Johnson accepting the fountain on behalf of the City of Ashland “in a short, humorous address,” and then wrap-up music by the Medford Band.

Those not interested in the fountain unveiling could have attended a band concert, this one by the Ashland Band, in another part of Lithia Park.

Was this the end of July 4th celebrations? Of course not! There must be fireworks on July 4th, and indeed there were.

Fireworks started around 9:00 P.M. on Granite Street, and were viewed by the crowds in Lithia Park. The Hitt Fireworks Company prepared the shows for all three days. T.G. Hitt was a chemist from England who opened his fireworks business in Seattle in 1905. By 1915 he was prominent enough to provide the fireworks for the massive Panama-Pacific International Exposition in San Francisco mentioned above. That may have been what brought Hitt Fireworks to the attention of Ashland organizers.

In addition to aerial fireworks, Hitt Fireworks specialized in dramatic set pieces on huge wooden frames, embedded with fireworks. Ashlanders got a taste of these set pieces all three days of the celebration. The Hitts got so famous that they were asked to create “special effects for scenes in several blockbuster movies, including the famous burning of Atlanta in Gone With the Wind, the battle scenes in All Quiet on the Western Front, and the fire and explosions in What Price Glory?” [Tate]

In addition to the best aerial fireworks Ashlanders had ever seen bursting in the sky, the Ashland Tidings described some of the elaborate set pieces produced by Hitt Fireworks. The writer raved about “dancing figures, an American flag, two monster pinwheels, a lithia fountain, a design on which below a bottle the words ‘Ashland Lithia Springs’ were emblazoned, and out of which a fountain of fire shot, more gun shots and more fixed designs, all of which beggared description.”

Following fireworks, there was a concert by the Central Point Band at 9:30 P.M. at the Lithia Park main bandstand.

People who were still awake and on their feet after 12 hours of non-stop Independence Day celebration had a choice of two dances, where they could continue to party into the morning. One dance was at the Natatorium, which was not solely a swimming facility. It also had a maple wood dance floor and room for 500 spectators or promenaders. The Natatorium was located at A Street and First Street, a five-block walk from the entrance to Lithia Park.

The other dance was held at the Bungalow restaurant, conveniently located in Lithia Park. The Bungalow, as it was known, had just opened on June 1, 1916 across Winburn Way from the Lithia water gazebo. See below for photos of the gazebo in 1916 and the spot where The Bungalow was located 100 years ago (now an open grassy area).

Those who started July 4th by watching the morning parade and ended the day dancing past midnight probably did not wake up in time for the July 5 morning parade. Yes, the City of Ashland provided a second day of non-stop celebrations on July 5 for the thousands of visitors (and a third day on July 6!). I plan to write articles about July 5 and July 6, 1916 in the future.

Click here to read Part 1 of the history of Ashland’s biggest bash.

Click here to read Part 2 of the history of Ashland’s biggest bash.