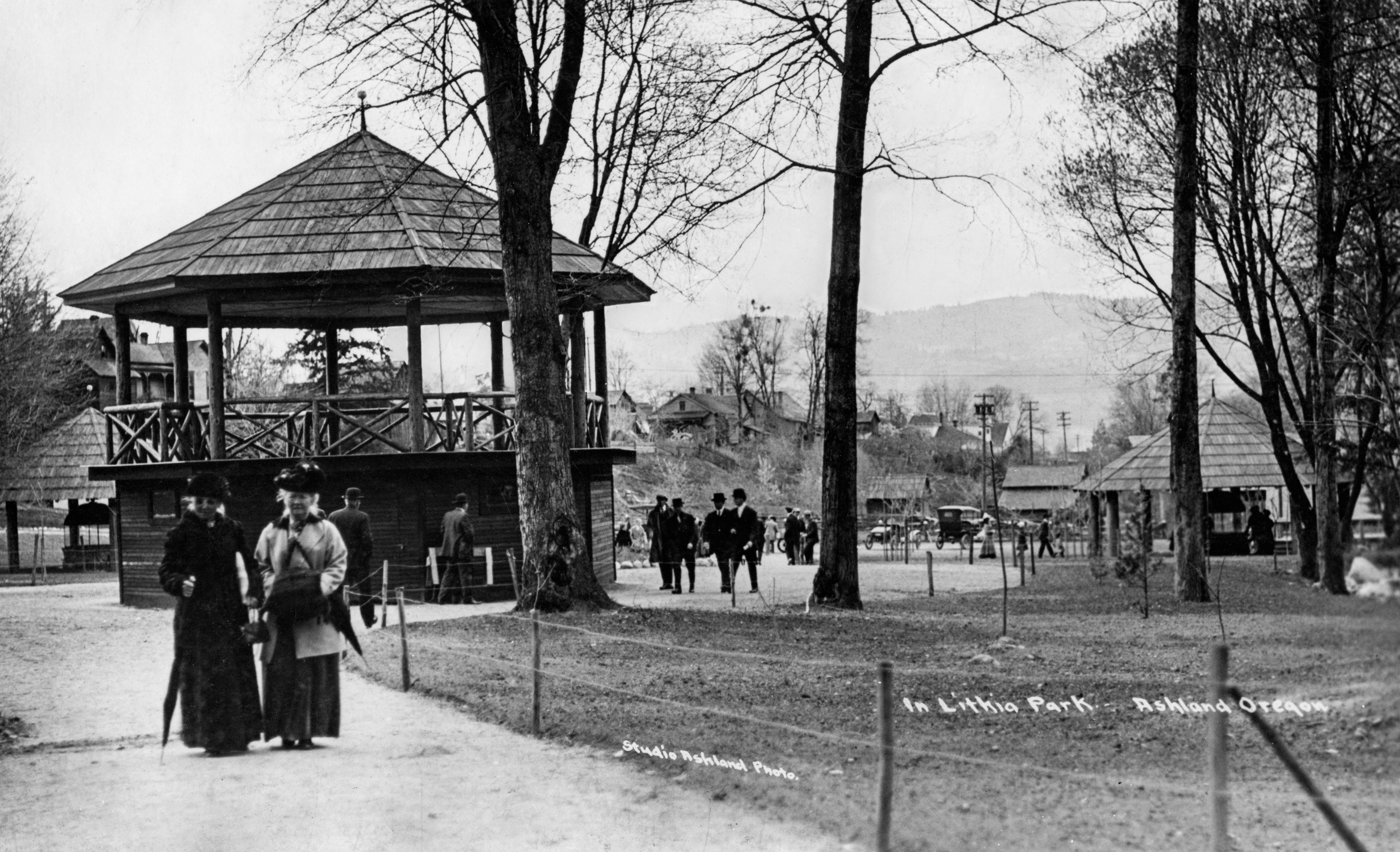 In Part 1, I wrote about the seven “streams” that made up the “mighty river” of activities. I wrote about why Ashland hosted 50,000 visitors in just three days — July 4, 5 and 6, 1916. That was the big-picture introduction to the events.

In the next articles, I will introduce you to the people who made it happen and to the hour-by-hour packed schedule from 10:00 A.M. until past midnight all three days. As the Ashland Tidings wrote on July 6, “There has been ‘something doing every minute’ from morning to – well, almost morning again.”

July 4th began with Queen Lithia’s Pageant, the Industrial and Patriotic parade. That was followed by a baseball game, a patriotic ceremony, water sports in two locations, the Wild West Rogue River Roundup, six band concerts (!), the ceremonial unveiling of a new fountain in Lithia Park, fireworks, and finally two dances that lasted into the morning. In this article, I will focus primarily on the parade and the Lithia Park bandstand patriotic ceremony.

The Huge 4th of July Parade

The Medford Mail Tribune wrote: ” The floats, the civic organizations, the riding clubs and the cowboy contingents, escorted by four marching bands, from Ashland, Central Point, Grants Pass and Medford made up such a cavalcade as had never been witnessed before in Ashland’s streets.” [quoted in the Table Rock Sentinel]

Today’s 4th of July parades are led by Ashland police officers on motorcycles, then a color guard holding United States and Oregon flags, followed by the Ashland City Band to bump up the energy of the crowd. The opening of the 1916 parade was very similar, according to the Ashland Tidings newspaper.

“In the lead was the chief of police and the Ashland patrolmen, mounted on horseback. Then Ed Thornton [Secretary of the Elks Club] on a magnificent charger. Next came the Ashland band in their natty uniforms of blue and white.”

The Tidings declared that “the 30,000 people who lined Main street from the East school to the West school cheered and cheered each and every feature.”

Here are the parade entries the 30,000 people saw, according to the newspaper.

**Riding in automobiles were the Mayor, guests of honor, and officials of Southern Pacific Railroad Company. Today we still have politicians and guests of honor in the parade.

**The Lithia Springs commission rode in their own decorated car

**Queen Mary Weisenburger rode in a float of pink and white. Miss Emma Jenkins was maid of honor to the queen, with little flower girls and pages at her feet. Remember “Queen Mary,” as she will star in both serious and humorous episodes to come.

**Grand Army of the Republic (G.A.R.) patriotic float, followed by many other patriotic floats. [The G.A.R. was a fraternal organization of veterans who fought for the Union during the Civil War. At its peak, more than 400,000 men were members. Max Pracht of Ashland, who helped make Ashland peaches famous, and for whom Pracht Street is named, was a member of the G.A.R. Read about Pracht and Pracht Street here. The last Civil War veteran died in 1956, but an organization of descendants of Civil War veterans, called Sons of Union Veterans of the Civil War, carries on the traditions.]

**Mrs. Peil’s decorated car, which won a first prize. [Mrs. Alice Peil is remembered today for the “Alice Peil walkway.” In order to have easier access to the family business, Alice and her husband built a steel stairway from their home at 52 Granite Street down to the Plaza, where Emil Peil had opened a blacksmith shop, and later ran an implement store with Alice. After Ashland residents started using the shortcut regularly, Mrs. Peil donated both the stairway and the northern six feet of her lot to the city, thus formalizing the public use of the walkway.]

**”Wah Chung’s Chinese colony was represented by an Oriental float of a unique character.” [Ashland had a small Chinatown from about 1880 to 1930, but Wah Chung and his family were the only Chinese who actively participated in the greater Ashland community. You can read my article about Wah Chung and the Chinese community in Ashland here ]

**The Vining Theatre had a coupe with a young lady representing Mary Pickford riding in it. [Ashland’s Vining Theatre offered a mix of live vaudeville shows and silent movies. In 1916 Mary Pickford was one of the most popular actresses of the silent film era, known as “America’s Sweetheart.” Three years later, in 1919, she co-founded United Artists movie studio, an amazing feat for a woman at that time.]

**A World War I preparedness float

**An Indian float “was awarded the special prize.” Umatilla Indians had come all the way from Northeast Oregon to be part of the parade and the Rogue Roundup.

**Pioneer ladies of Ashland float had an old wagon “such as was used in crossing the plains….”

**Local railroad workers had a complex float called the “Lithia Special.” It had a full size engine, cab and caboose constructed around a car, and “won the industrial prize and the most unique feature of the parade….”

** Bands: “…never before have four bands marched in one parade in southern Oregon.” Not only did the Ashland band march, but also the Medford band, the Central Point band and the Grants Pass band.

**The Auxiliary float “was easily the most beautiful of the parade” and got a first prize. According to the Ashland Tidings, “The float was done in yellow and white. it represented ‘A Gift to the World,’ huge loving cups representing the gift. The center of the float was built to represent a fountain with the fairy of waters waving her wand for the waters to arise and gush forth power and health. Young ladies in costumes and carrying symbols of art and music to give praise to Ashland were grouped in niches around the fountain. A huge harp on which to play paeans of praise was played by Mrs. Shirley Keene in Grecian costume. Minora Cornelium represented the arrival of spring.”

**The Women’s Civic Improvement Club had five cars done alike in white with red rosettes, and won a second prize.

**The Maccabees, Rebekahs and Medford Woodmen of the World, more fraternal organizations, had the next floats.

**Ashland horse riders went on and on. There were “perhaps 200 in line, on horses, followed by children on ponies and many in cowboy and cowgirl costumes.”

**Ashland Fruit and Produce Association had a “float loaded with seasonal fruits.”

**Briggs & Elmore had a decorated car. [I wonder if it was anything like Briggs’ shoe store decorated car (below) at the 1912 parade.]

**”The Saunders car in white, with a bevy of pretty girls, received applause along the route.”

**East Side Pharmacy float was next.

**Ashland Trading Company float was filled with greenery and with children.

**Home Laundry had a float.

**The White House Grocery was very popular in Ashland, and their float came next.

**Hotel Oregon on East Main Street was the premier hotel in Ashland at this time. They were in the parade “with an automobile load of pretty girls.”

**Clover Leaf Dairy had a float.

**The Natatorium: “Several boys in swimming costumes represented the Natatorium.” [The Natatorium was a block-long indoor swimming and dancing “palace” on A Street from 1909 to 1919.]

**There were cowboys and cowgirls (perhaps 150) from Pendleton and Klamath Falls, as well as Ashland and Medford locals.

**The parade included clowns in vari-colored costumes, though most of the comic features were saved for the King Sulphur parade on July 6.

**I am not sure what to make of the newspaper’s description of this parade entry: “Benton Bowers handled the reins of an old-fashioned stage coach team loaded down with cowboys and three trick bears which were brought to Ashland by Cowboy Timmins after he had roped them in the wilds of the Curry country.”

**There was a Rogue Roundup float that advertised the Wild West rodeo event to take place at 2:00 P.M.

**Wait…one more thing…the paper said there were decorative bicycles interspersed throughout the parade.

Today’s Chamber of Commerce staff and volunteers can tell you how much work it takes to put on Ashland’s large 4th of July parade each year. In 1916, one woman volunteer took on even more, and the newspaper gave credit where credit was due. “Mrs. Hilty was in charge of the parades of the three days, and her executive ability was a monster factor in the success which all three scored.”

Mrs. Hilty was an active community member. She also appears to have been a social activist at heart. Later that year in October 1916, she put on a one-woman program at the ladies’ Civic Improvement Club meeting. According to the Ashland Tidings, “Then Mrs. Hilty carried the gathering back to old school days in her sketches of Harriet Beecher Stowe [abolitionist, author of Uncle Tom’s Cabin], Julia Ward Howe [abolitionist, women’s suffragette, poet and author, who wrote the song ‘Battle Hymn of the Republic’], Helen Hunt Jackson [Native American rights activist, poet, author], Ella Wheeler Wilcox [poet and author] and Louise May Olcott [should be spelled Louisa May Alcott; author of Little Women]. Especially close and dear are the recollections of the vivid human bond in ‘Little Women.'”

After the parade was over, visitors and locals had a choice of multiple activities. At 10:00 A.M. people could watch the first of three baseball games between teams from Weed, California and Medford. The first game was an easy win for Medford, 9-0.

Those who approved of Oregon’s new prohibition law that had just taken effect on January 1, 1916 could have heard a lecture at the Chautauqua building sponsored by the Women’s Christian Temperance Union.

If July 4, 1916 were a normal hot July day, many people would have walked over to Helman’s Sulphur Baths for 11:00 A.M. water sports. See photos below for what  Helman’s looked like inside and outside.

One more “in 1916 and today:” the current Butler Band Shell in Lithia Park, built in 1949, is located right where the original, smaller Lithia Park bandstand was built.

In 1916, the Declaration of Independence was read by Miss Minnie Bernice Jackson, who was 23 years of age at the time. E.L. Rasor led the singing of the “Star Spangled Banner,” and the main dignitary address was given by I.E. Vining, owner of the Vining Theatre on East Main Street. [Irving Vining received a postgraduate degree at Teachers College at Columbia University in New York. In addition to owning the Vining Theatre, he taught for seven years at Southern Oregon Normal School.]

In Part 3, we will learn about the Rogue Roundup Wild West show, more band concerts, the unveiling of the “Fountain of Youth” in Lithia Park (now called the Butler-Perozzi Fountain), fireworks on Granite Street and finally late night dances in two Ashland locations. All of that was still on July 4!

Click here to read Part 1 of the history of Ashland’s biggest bash.

Click here to read Part 3 of the history of Ashland’s biggest bash.