Tree of the Year 1988: Monterey Cypress 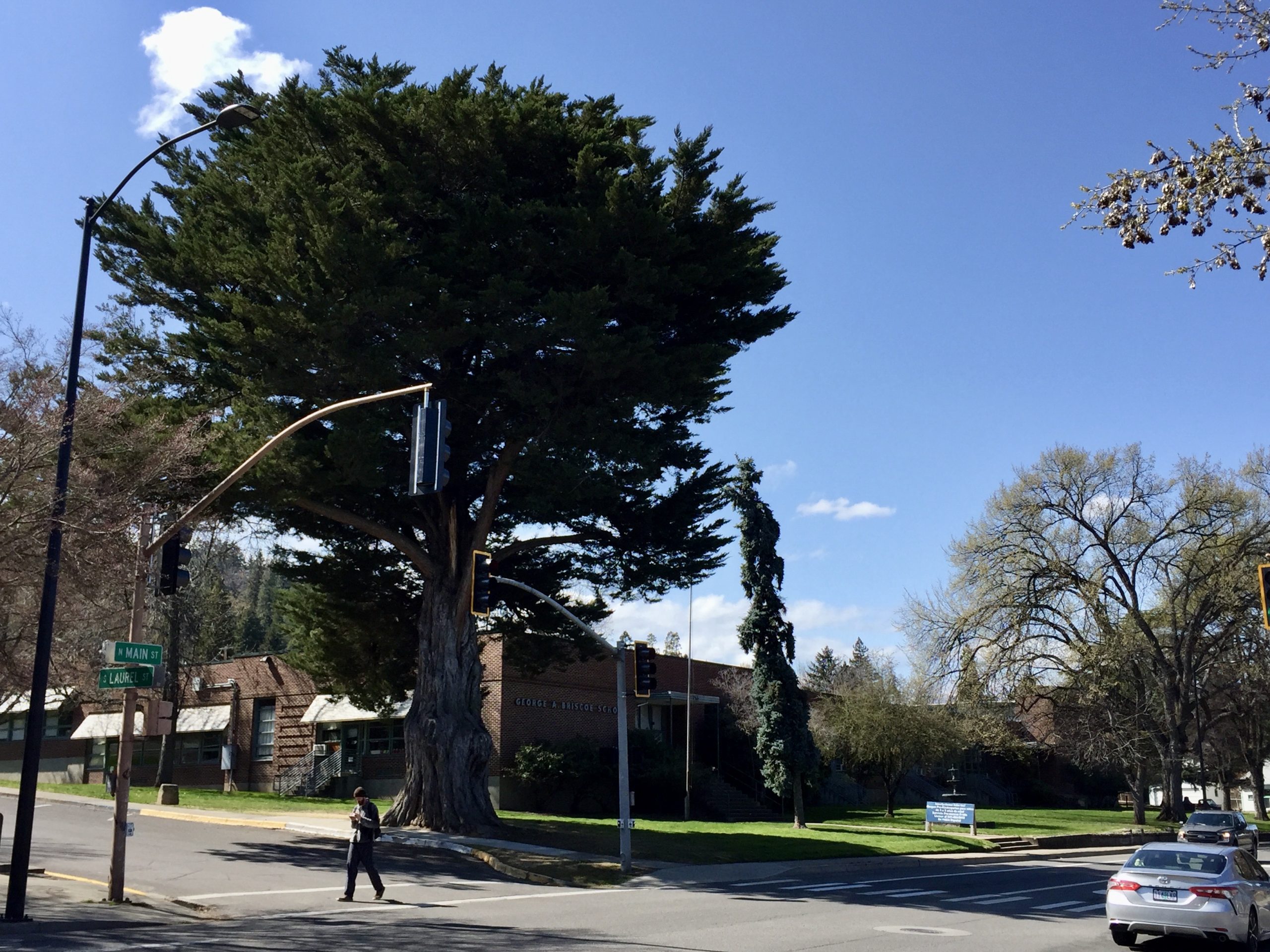 I have been impressed by the huge Monterey cypress in front of Briscoe School ever since I moved to Ashland in 1991. It is an awe-inspiring sight along North Main Street.

Did you know that Ashland has a Tree of the Year?

Did you know that Ashlanders vote each year to choose one Tree of the Year? Years ago, when I first heard about our Tree of the Year tradition, I was happy to learn that the voters’ very first choice – in 1988 – was this Monterey cypress. I will share a little of this tree’s story with you, including photos from 1915, 2001 and 2021.

Our 1988 Tree of the Year grows at the corner of North Main Street and Laurel Street. This corner was part of early Ashland, all the way back to the 1860s. This is far from the oldest tree in Ashland, but it has lived more than 115 years. The sign on the tree says it was planted in 1905 by Ross Eliason. Ross was an early Ashlander and an active member of the First Methodist Church across the street from the Monterey cypress tree. I visited the church to see what I could learn.

Former church member David Mason told me: “Somewhere in my archives is an autobiography written by Ross Eliason. Myself and another Ashland tree commission member cut the sidewalk around that cypress tree in 1992 or so and we put up a brass plaque on the tree. Don’t remember what it said.”

The brass plaque is still there, so you can see for yourself what it says.

We are fortunate to have a 1915 photo of the old West Side School, which was at this site before Briscoe School. On the left edge of the photo is a small tree (see arrow), which must be the young ten-year-old Monterey Cypress.

About 40 feet up in the tree, “There are millions of ants, biting ants!”

I visited the tree with arborist Casey Roland. He told me that he climbed way up into this tree to prune it a couple times when he worked for Tom Myers at Upper Limb It. I learned a lot as I listened to him.

First, I learned something that surprised me. The “center” of the large Monterey Cypress branch that was cut in the early 2000s is not at the center! The hardest core wood for supporting the branch is very close to the top. Casey pointed to the branch’s core wood in this photo.

If you look closely at these photos, you can see that the annual rings of the branch growth are much more widely spaced toward the bottom of the branch than at the top. Casey said, “It’s the same number of growth rings top and bottom, just a difference in how close together they are.”

I learned that when he prunes a Monterey Cypress, he cuts as few branches as possible. This is because the branches tend to overlap as they grow. When this happens, the branches support and protect each other. “The fuller you have the canopy, the less likely they are to break in a strong wind or after snowfall,” Casey said.

Heavy snow did severely damage the 1988 Tree of the Year sometime after the photo below was taken in 2001. You can see how full the tree was in 2001, from the top almost all the way to the ground. I took a photo in 2020 from almost the same spot as the 2001 photo. You can see that many lower branches were totally removed by 2020, and even some of the upper branches had to be cut back. The massive trunk now stands out more than it once did. The Monterey Cypress is not ‘the tree is once was,’ but it is still quite impressive.

Finally, another addition to my knowledge of trees. As I wrote above, Casey has been high in this tree. He told me that about 40 feet up in the tree, “There are millions of ants, biting ants!” That sounds very uncomfortable for the arborist. I got the impression that these ants live their entire lives up in the tree.

Monterey Cypress are naturalized only along the central coast of California, near Monterey. Hmm, I wonder how they got their name. These coastal trees are wind-blown from constant coastal breezes. As a result, they normally do not get very large or tall, and they tend to be gnarled in their growth patterns.

They now grow around the world

Monterey Cypress are now widespread in New Zealand and grow in many other countries around the world. They prefer cool summers and coastal areas, but as you can see from many healthy Monterey Cypress in Ashland, they are adaptable.

For a “sneak preview” of my 2004 Tree of the Year article, you can visit the huge Monterey Cypress at the corner of Scenic Drive and Wimer Street. Why are these Ashland trees so large despite our hot summers? According to the San Francisco Botanical Garden website, “Monterey cypress that are planted in watered, protected areas away from the ocean grow bigger, taller and straighter.” Regarding water, Casey Roland believes that both the 1988 and 2004 Monterey Cypress Trees of the Year are growing above either a spring or an underground stream that nourishes their roots.

A brief history of the site where this tree is growing

This tree has seen generations of Ashland students pass under its branches. However, a school was here even before the tree was planted, going all the way back to 1872. That is when Methodist minister J.H. Skidmore founded the Ashland Academy here. It was most likely a two-year college.

The Academy failed financially, closed in 1879, then reopened in 1882. With a small boost due to recognition as a Normal School (a teacher training school) by the state of Oregon, the college had four teachers and 42 students in 1882. This ‘life’ of the college only lasted until 1890. However, Ashland’s college has had as many lives as a cat, and it finally settled in 1926 at its current location on Siskiyou Boulevard – as a Normal School, then a State College and now a University.

A building here at North Main Street and Laurel Street replaced the Academy and was used for Ashland High School from 1890 until 1911. It was initially known as West Side School and later was called Washington School. By the 1940s, Washington School was in poor condition. Briscoe Elementary School was built here in 1949. Still here, it is not currently used as a school due to Ashland’s declining elementary school age population.

I think you will enjoy a brief visit to the 1890s, courtesy of the “horse mounting rock.” See the photo below.

The majestic tree next to Briscoe School touched generations of school children, teachers and administrators. I learned from the mother of long-ago Briscoe students that it was even adopted as the school’s logo. Look at this Student Directory from 1997-1998.

Briscoe School had a school song, written by Jill Joos Rothman. It was called “Briscoe: Roots to the Future.” If you attended Briscoe, you may remember singing it. Here are the words to the chorus:

There is our 1988 Tree of the Year again, part of the school song – “Branches reaching to the sky.”

Introduction to our Tree of the Year program

Finally, I would like to introduce the Tree of the Year program for readers not familiar with it. The city Tree Commission was established by Ashland City Council in 1983. One of its first goals was to establish Arbor Day tree planting and education in town. A few years later, in 1988, the commission began the annual Tree of the Year tradition.

Each year, the Tree Commission collects Tree of the Year nominations from citizens. The nomination form on the city website says that “Nominated trees should be visible from the street and NOT located within a city park or right-of-way.” Commissioners visit the nominated trees and narrow the field to about five finalists. Then “we the people” make the final choice. Tree commissioners have told me that very few people vote for Tree of the Year. I hope my articles will increase interest and participation!

During the next few years, I will feature each Tree of the Year with its own photo essay. I will learn from arborists, historical research, tree websites, neighbors and more, then share what I learn with you. I also hope to learn stories about these special trees from readers.

In closing, I like this summary of the benefits of trees.

“From the Tree Commissioners: An ongoing responsibility of Ashland’s Tree Commission is to promote public awareness about the trees and associated ecosystems that comprise our community forest. All the city’s trees, shrubs or bushes, whether standing on public or private property, absorb water and prevent soil erosion, contribute oxygen to the local atmosphere and add plant matter that becomes compost in our soils. Trees, apart from these beneficial physical contributions to our environment, have long captivated humans with their graceful forms and silent beauty. Every time we appreciate their intricate shapes or seasonal colors, we realize again that trees bring a powerful if intangible richness into our daily lives.” [Todt & Holley]

Anon. City of Ashland website, page with a link to photos of each Tree of the Year, many with a historical photo of the tree.

Anon. City of Ashland website, page with a photo and map location of each Tree of the Year.