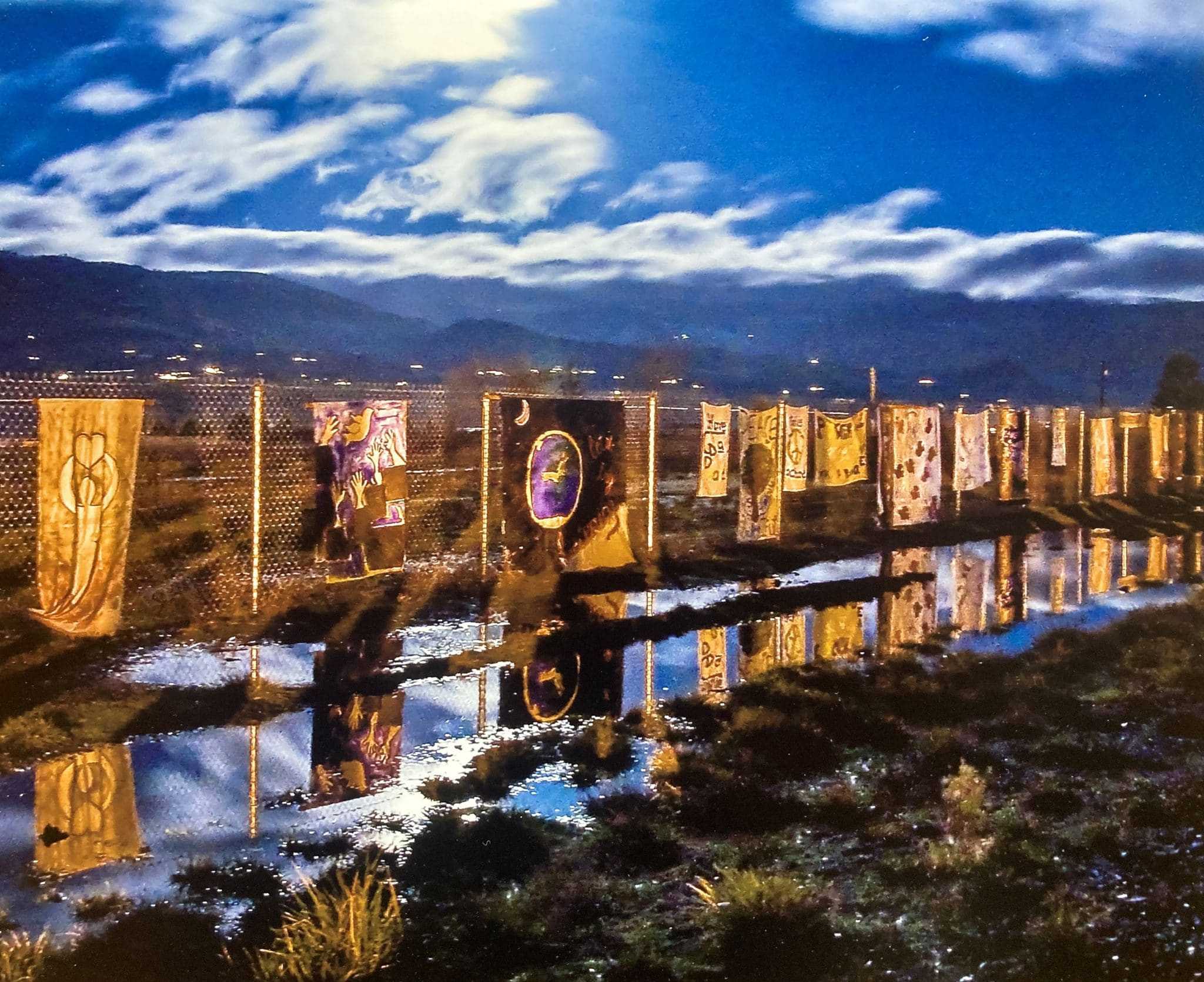 Peace Wall: In front of Ashland Library since 2010.

This is a story about a City of Ashland public artwork called Peace Wall. In order to tell that story, I have to tell you about the community art project called Peace Fence. It’s like when you are telling someone how you became the adult you are, you begin by describing your childhood experiences. In Part 1 (this article), you will learn about the Peace Fence. In Part 2, you will learn about how that creation was transformed into another one called Peace Wall.

In the beginning was the vision

“The idea for the Peace Fence came to me in 2007. We were in the middle of the Iraq war. In that period of time, I had lost three family members. I would work in my garden early in the morning, then walk [from my house on Hersey Street] over to Noble Coffee on Fourth Street. One day as I was crossing over, walking by the railroad tracks fence, I got this idea. I had been trying to think of a way to memorialize my family members in a positive way. I talked to [my partner] Kay and said, ‘What if we make this fence into a peace fence? It would be for my family, and it would express how upset we are about the Iraq war.’ So that was the very beginning of the story.”

Then came the core group

When I interviewed Jean in her cozy front yard during January of 2022, she explained what happened next. A week after her initial vision in early 2007, she and Kay went to a dinner with friends at Nancy Parker’s house. By then, the United States had been at war in Iraq for four years, and everyone in attendance was upset by the continuing conflict. Jean presented her idea. All loved the idea of painting banners to promote peace, and they spread the idea to their friends. Jean told me, “Banners started coming in. Our living room was stacked with piles of these banners.”

As you read more of the story, you may wonder at Jean’s passion and commitment to the project. No need to wonder. She has been deeply dedicated to activism for peace (and against war) since the 1970s. The Peace Fence (which has become the Peace Wall) is another practical manifestation of her lifelong beliefs.

The core group stayed in touch as the banners were coming in to Jean and Kay’s house. Jean continued: “We decided that we would surprise the town. Everybody came to our house the night before Mother’s Day in 2007. You wouldn’t believe it. We had 27 people here. When it got dark, we walked over with flashlights and someone drove the banners over. We had tall people to fasten the tops of the banners to the fence and shorter people would fasten the bottoms. It was absolutely joyous.”

“On Mother’s Day 2007, the town woke up to this wonderful Peace Fence.”

On Mother’s Day, May 13, 2007, the town woke up to banners covering the fence by the railroad tracks along A Street. The celebration that day included the Peace Choir and a bagpiper. Remember, this was before Railroad Park was built here along the railroad tracks. The railroad company had not yet cleaned up all the chemical toxins left in the soil and the site was an eyesore. The core group was delighted that the Ashland community embraced not only the messages of peace, but also the beauty these colorful panels brought to the neighborhood.

A number of people walked the Peace Fence every day during the eleven months it was up, both as a form of walking meditation and to check on the safety of the many banners.

“Word of mouth” about the Peace Fence banners turned into “word of media.” Between 2007 and 2009, our local newspapers printed eight articles about the Peace Fence and Peace Wall. During 2007 and early 2008, many more banners were added to the fence. The variety of artwork included paintings, tie-dyes, embroidery, quilts and batiks. Some were sent from other states and countries; the farthest one traveled to Ashland from Norway.

Here in Ashland, More Than 170 school children participated in painting banners for the fence!

Who would destroy messages for peace?

Sadly, a few people hated the messages for peace enough to vandalize the banners four times in 2007 and 2008. First, seven panels were stolen from the fence, with only three recovered. Several were damaged on New Year’s Eve 2008. Five more panels were shredded and left on the ground the night of June 2, 2008. Three of these five had been painted by local kindergarteners and first-graders. What sense does that kind of “protest” make?

Finally, the June 21, 2008 Ashland Daily Tidings reported: “Creators of the 2-year-old Peace Fence, located near the tracks in the Railroad District, found it destroyed Friday, with all 120 panels ripped out and tossed on the ground.”

I like how Cynthia Bronson, in a 2019 Ashland Tidings article, described what happened next. “The waves of outrage and grief were palpable in the community. It was unfathomable. Jean, the diminutive Brit, pronounced that we must move to transform this act of toxic anger and energy into the energy of love.”

How to transform anger to love?

The fabric peace panels were gone, destroyed. Fortunately, fellow artist and activist Kate Geary had taken professional quality photos of most of the 200 or so banners made for the Peace Fence in 2007 and 2008.

Here is a description of the next transformative moment from two perspectives. Jean Bakewell, as you now know, was the visionary behind the Peace Fence and Peace Wall. Sue Springer was a leading ceramic tile artist in Ashland. Notice the hindsight humor in both of them.

(#1…as told to me by Jean Bakewell) Jean said that after the vandalism, she and Kay stopped by Sue Springer’s Illahe Studios and Gallery on Fourth Street. “We went in and said to her that we were thinking that maybe the city would let us do a Peace Wall. Sue laughed, saying ‘oh, yeah, like that’s going to happen.’ So we said we’d settle for a bench or something.”

(#2…as told to me by Sue Springer) “Jean and Kay came to me and asked, ‘Is there some way we can paint these [banner photos] on tiles to make this more permanent?’ I thought they were nuts. I said, ‘The city will never let you do this…no way will you ever be able do this. But I’m on board with you because I think the idea is brilliant. Let’s see how far we can go with it.’ “

And Jean was relentless.

You can find out what happened next in the transformation of the Peace Fence into the Peace Wall in Part 2, which will be published soon.

Here are some of the core group who made the Peace Fence happen.

Morse, Marsa. (32 minute movie) “A Community Committed: The Story of the Ashland Peace Wall,” 2011. [Jean Bakewell loaned it to me]

Springer, Sue. Interview and personal communications, November 2021 and other dates.