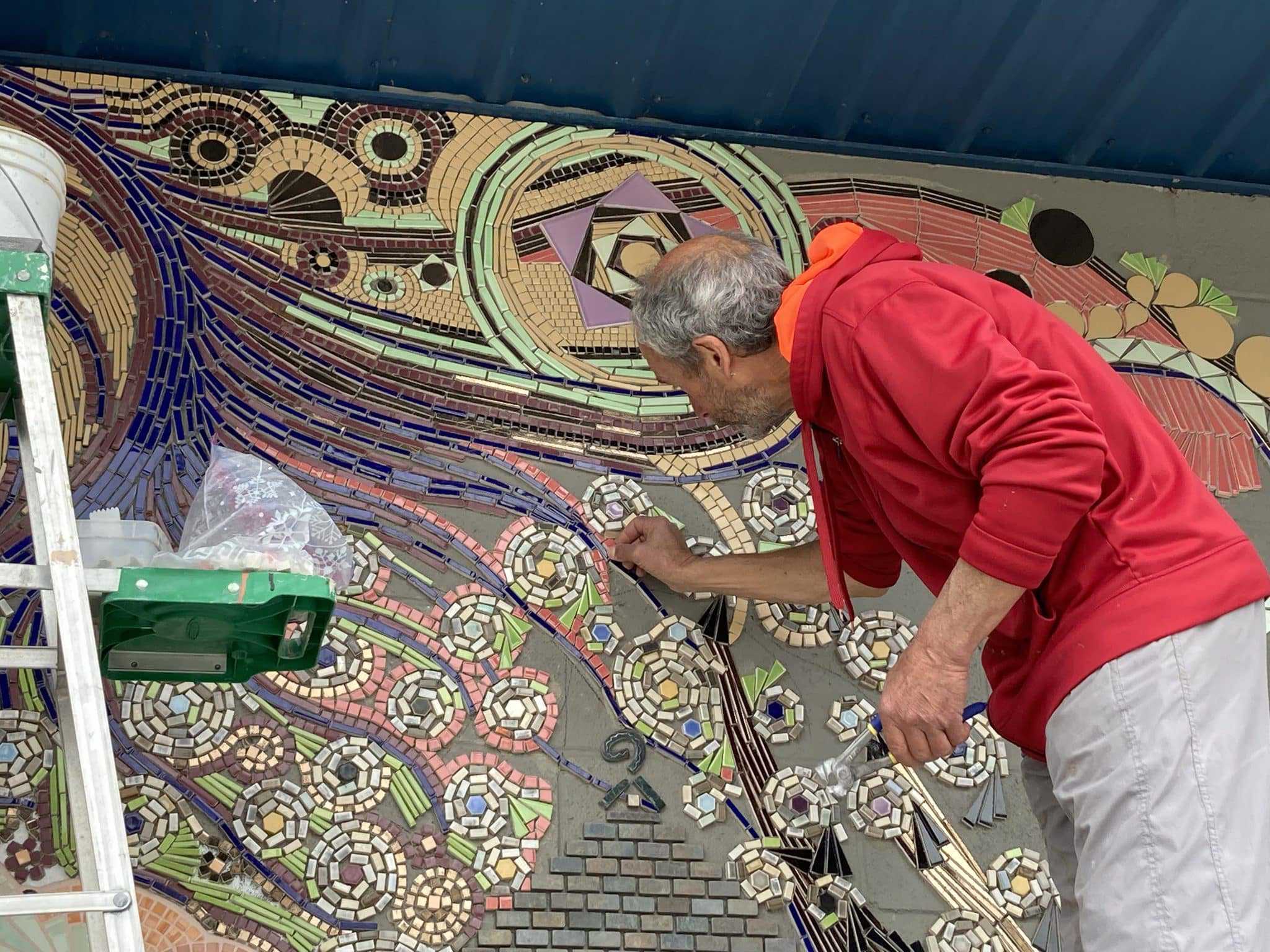 Posted at 08:23h in Art, Business by Peter Finkle 6 Comments

“I had been thinking about mosaics. Everywhere we would go, I would notice mosaics. Then we bought this building and there were all these blank walls. The first floor walls are cement block, which is the perfect backing for putting tile on.”

When I interviewed Rob Joseph in February 2022, he told me that he and his wife Linda Lanzhammer ran a hostel here at this building from 2007 to 2016. Called Ashland Commons, the hostel takes up about half the building. For the first few years, Rob and Linda rented the hostel space from the building owner. In 2010, the owner asked if the couple would like to buy the building, and they said yes. At that time, Rob was also running the Lithia Artisans Market, driving a school bus and making pottery. Busy life!

As mentioned in the introductory quote, at that moment in his life he was ready to do something with mosaics. Once he owned the building, his something became clear.

Rob began putting ceramic tile mosaics on his building in the spring of 2011. As of 2022, you are seeing 11 years of his creativity – AND he is still adding to it!

I will tell you a little about Rob and Linda’s life and art in this photo essay. Mostly I want to share photos of their creativity with you.

Here’s where the mosaics began

Rob pointed as he said, “I started by just going around doorways. That was the very first thing around that doorway.”

That’s a lot of tiles!

You may have noticed that the tiles are small, and that there are thousands (millions?) of them. Once Rob got going, the scope of the project became a financial challenge — where to find the tile inexpensively. An angel appeared in the form of a teacher from Portland.

Rob explained, “We had a school group from Portland, coming for the Shakespeare Festival, stay here [at the Commons]. I was starting to do some tile stuff on the walls. The teacher said, ‘You’ve got to go to this place in Portland called Pratt + Larson. It’s a tile factory and they have an outlet room in the back where you can get seconds and misfires by the pound.’ So I went to Pratt + Larson and it has been a great source for ten years.” Rob also gets lucky from time to time finding tile seconds through Craigslist ads.

How are the designs created?

As we looked at the wall together during an April 2022 conversation, I wondered aloud how he began creating the complex designs. Rob replied, “When I gathered new tiles, which were usually in large pieces, I would start cutting different shapes with my tile saw – squares and rectangles and wedges and triangles. I would put them in boxes, bring them here to the building, and I would just start in a corner somewhere and start laying out shapes…”

He tried to continue: “What…I had no plans…”

Astonished, I interjected again, “Oh, come on. You didn’t draw designs ahead of time?”

“No, I didn’t.” Rob took me to an area that is currently in progress. “This is where I am working now. The tiles are smaller here than they were years ago when I started. I thought, I’m going to go small and more intricate, cause I kind of paid my dues by now. I can take as much time now as I want.” Pointing to the upper left corner, he added, “I started right here. I envisioned a circle and built from there.”

Another layer of mosaic art complexity

Another layer of complexity for Rob’s designs is that he only has so many of each color and shape of tile. As mentioned above, he is working mostly with large pieces of tile he picked up on deals and then cut up into small shapes. He might have 100 or 400 of a particular color and shape, but when he uses them all, that’s it. So as he lays the design on the wall tile by tile, he keeps not only the design in his head but also how many of each color and shape he has left to use.

He again showed me the circle in the corner, filled with small rectangular tiles, as an example. With this part of the wall, he began with the blue-black tiles and started creating the design from the middle. As he ran out of those, he switched to the dark brown ones, then to the lighter blue ones, always thinking and planning ahead.

I haven’t written anything yet about grouting the tile. This huge project takes a LOT of grout. The photo below shows areas of tile that are grouted and not yet grouted.

He likes to experiment. For example, one area has an octopus and mermaid and another area has grapes.

Rob and Linda made the first bench from scratch out of cement and rebar, using wood forms to hold the cement. After letting it dry for six weeks, he added the tiles to the bench.

Rob and Linda made the second bench with cement blocks as the structure.

I asked about the design of the Ashland Commons sign. Rob explained that he made these tiles for his kitchen counter. He ended up not using them in the kitchen, so he adapted them for the sign. Linda painted the designs on each of the sign tiles.

The first floor walls are cement block, which is the perfect backing for putting tile on. Rather than using a mesh backing material to apply the tiles to, Rob puts each individual tile directly on the wall.

Even the upstairs of the Ashland building is covered with mosaic art. The upstairs has wood siding, which is not a good surface for tiles. For the upstairs, tile is glued to a cement board material called HardieBacker, which is then screwed into the wall. Rob said it’s best not to use plywood for backing material, because plywood absorbs moisture from the air over time and breaks down.

Some of Rob’s themes upstairs include squares, paisley, guitars and pizza slices! He tells me that the upstairs is complete in terms of mosaic art.

If you visit the building, you will notice paintings on the walls in addition to the amazing ceramic tile mosaic art. Rob’s wife Linda Lanzhammer is the painter in the family. She studied art at the University of Wisconsin-Madison, with a focus on painting and metalwork. She sold jewelry at art fairs throughout the western United States for many years. After the couple moved to Ashland, Linda decorated the pots Rob made, which they sold at the Lithia Artisans Market.

What brought you to Ashland?

Rob answered, “About 30 years ago, my mother and step-father (who live in L.A.) bought a ranch in the Applegate Valley. They came up from L.A. for the weekend once every couple weeks.”

At the time, Rob and his wife were living in North Carolina with their seven-year-old daughter. They decided the time was right to move to Ashland so their daughter “could see grandma.” Not long after arriving, the two of them bought The Mousetrap B&B in 1995, and owned it for a few years. Located at the corner of Helman and Hersey Streets, it is now called The Blue Moon.

I asked Rob about his life as an artist. He replied, “For some reason, I got into pottery in high school. When I was a senior, I took pottery and felt a real connection with the clay right away. Not long after high school, I worked for a potter for a while and then joined as pottery studio in Venice [Los Angeles area].”

Rob and Linda met in 1978 at an art fair in South Lake Tahoe. For the next couple of decades, the two of them decided to sell their artwork at craft fairs and live a simple lifestyle. Rob concentrated on pottery while Linda designed and made silver and gold jewelry. By 2011, when Rob began creating the mosaics here on Williamson Way, he had been a potter for 30 years and was ready to move on to other things.

Linda explained how she got more and more involved with Rob’s big project in recent years. “Rob and I collaborated on the Ashland Commons tile sign. Sometime later I got rid of a very dusty plastic tree inside the indoor entrance and painted a mural on the wall. Then we wanted to give the laundry room some personality and I painted a scene on one wall with a view of Vernazza, Italy. More recently, Rob suggested painting something that could be mounted on the outside. I did another scene and Rob framed it with his mosaics. I am currently working on a painting that will go either in the indoor landing area or on the opposite laundry room wall. After that, who knows?”

Where you will find this amazing mosaic art

If you want to see this Ashland building covered with mosaic art for yourself, take Hersey Street to Williamson Way. The first building on the right is the Ashland Commons, 437 Williamson Way. If you walk around to see the mosaics, please be respectful of the people who are living in the apartments and staying in the hostel.

Rob Joseph and Linda Lanzhammer. Interview and personal communications, February 2022 and other dates.