“A Glimpse of Nature’ hidden in an alley 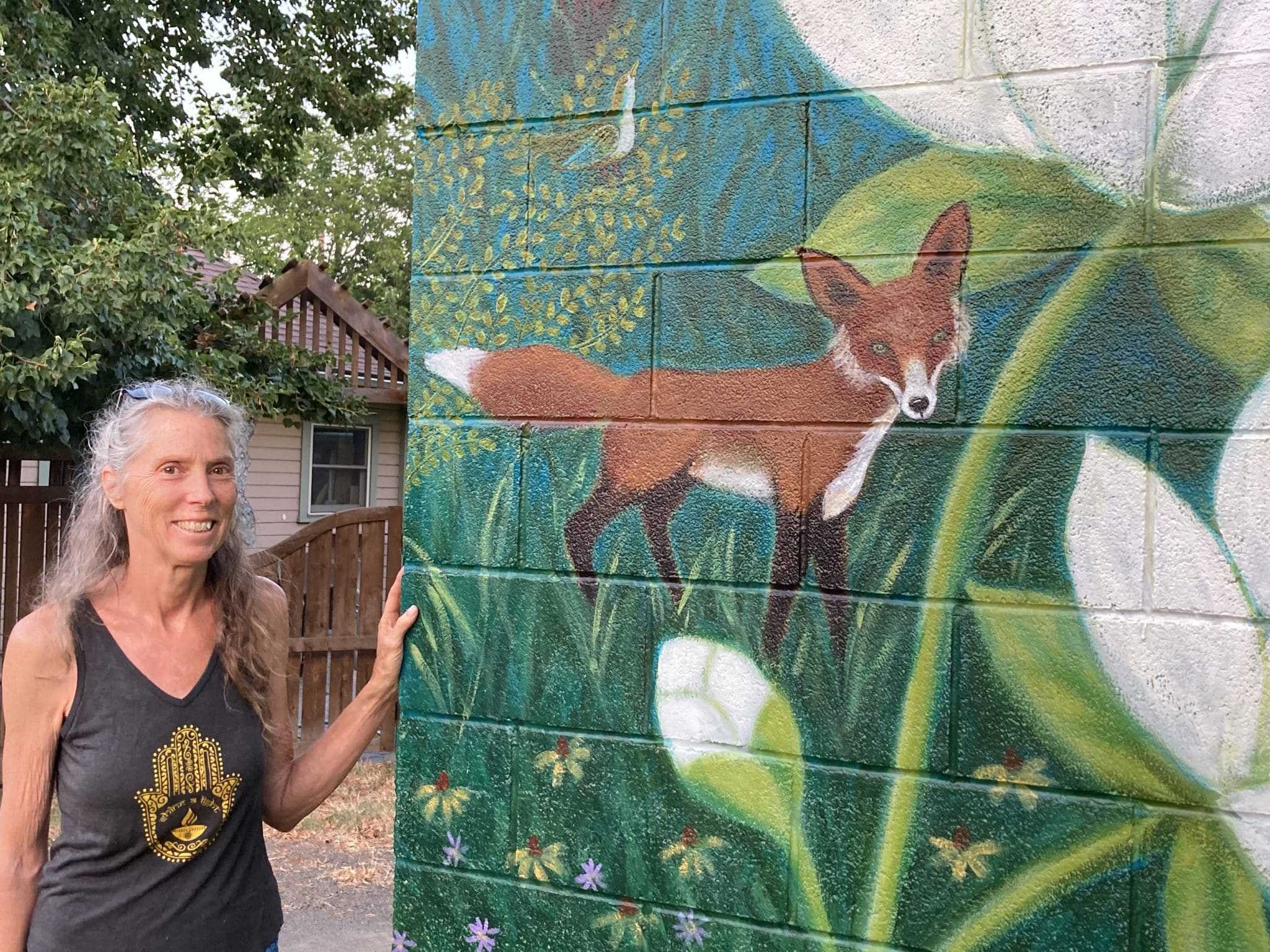 10 Oct “A Glimpse of Nature’ hidden in an alley

This photo essay is about a beautiful “hidden” alley mural in a Quiet Village neighborhood. It does not have a formal name, so we call it “A Glimpse of Nature.”

“Beauty around us is important. We need more of it, because it’s what we all get nourished by.”

On August 8, 2022, I received an email from Joanie Kintscher, a fellow member of the Ashland Garden Club. She wrote, “Fell in love with this mural….” and included a photo that got me excited about seeing the mural for myself. I wandered the neighborhood for at least 15 minutes the next day before I finally found it.

Location of this “hidden” alley mural

I will make it easier for you. A Glimpse of Nature is painted on the side of a garage along an alley that runs between the west end of Ohio Street and Orange Avenue.

I went back on August 18 to find the address of the nearest house. My plan was to mail a letter asking if they could tell me something about this mural. Fortunately, what I call my “WalkAshland serendipity” kicked in. As I walked up to the house, a father and son were outside refinishing their front porch. I introduced myself. Within five minutes, the mother of the house (Megan) walked me out back to the mural and began telling me stories.

She told me that her love of singing led her to found the annual Rogue World Music festival, and the singing ensemble of the same name. She has retired from those two groups, but still sings with a trio called Wild Honey.

How the beautiful alley mural came to be

As we stood in front of the mural, she continued, “My husband Tom and I had imagined this wall as a perfect canvas for a mural of some sort for many years. One of our good friends is Cynde Gragert, who also goes by the name River. She has been in this community for a long time, and is a yoga teacher as well as a phenomenal artist. I’d worked with her many times creating custom art for our performances at Rogue World Music. River was also one of the first singers in our ensemble.

“River and I had talked about doing a mural here. In 2020 when COVID hit, it was very hard to find work, to remain active, and to nourish our souls. I thought, ‘This could be the perfect time for her to work on the mural, to bring some joy to the community through art.'”

Megan and Cynde both like whimsical imagery of nature. They thought adding some small and hidden creatures in the mural would appeal to children walking by. Before starting the mural, Cynde brought a sketch of it to Megan and Tom, which they loved.

Cynde began this mural in the summer of 2020 during COVID time. Not only COVID time, but also smoky-air-from-forest-fires time, so she didn’t complete the mural until the summer or early fall of 2021. Because of its alley location, only neighborhood people have known about it until now.

“So much of outdoor painting is working with what you have.”

Painting on a cinder block wall is challenging, even when using thick acrylic paint. First, the surface absorbs paint, so a thick layer of outdoor green primer was essential. If she could do it all over again, Cynde said she would probably begin with darker green primer — and two layers of it instead of one. Second, the surface is rough, not smooth. After starting with a negative attitude about the surface texture, Cynde finally decided, “I’m just going to roll with it.” She ended up embracing the “problem” and liking the result.

As she brought me up close to the wall, she pointed out many rough-textured areas where you can see spots of green primer through the covering layers of paint. Then we stepped back and she pointed out how this “problem” adds more dimension and interest to the painting. She added a bit of wisdom: “Working with what you have sometimes forces you to do things differently. That in itself can make you a better artist.”

Comments from neighbors about the “hidden” alley mural

This is a popular alley for locals to take neighborhood walks, with or without their dogs. Cynde loved the positive comments from people as she was out working on the mural.

“It’s gorgeous! You are gifted!”

A neighbor walking by

As I was interviewing Cynde in August of 2022, a woman walking her dog stopped to look at the mural.

She asked Cynde, “Did you paint this?”

“God, it’s gorgeous! You are gifted!” exclaimed the dog-walker. “I love looking for all the small animals.”

As the two women talked a bit more, it turned out that both had studied drumming with Chris Wood many years ago. Small world!

Here is a sweet story.

Notice the window in the middle of the mural. That is the only window for this garage building, which is currently used primarily as a music room and storage area for the family. Cynde spoke of being immersed in painting the mural, then suddenly hearing beautiful voices serenading her. The voices were Megan’s small singing group, the Wild Honey Trio, rehearsing in the music room and brightening Cynde’s day.

When did you become an artist?

Cynde has been artistic all of her life. In terms of visual arts, she said, “I drew horses, as many young girls do.” Her aunt, who was a professional sculptress, would visit the family and encourage Cynde with positive comments, which meant a lot to her.

During high school, she gravitated more toward music than art. However, when she began to study with the art faculty at Southern Oregon University, she became clear that art was her lifelong calling. Print maker Lyle Matoush inspired her the most. Other influential professors were Peg Sjogren, Bob Alston and Betty LaDuke.

“I knew I was an artist, but I am still really interested in lots of different styles of expression. I am inspired by lots of different artists, whether they are sculptors or multi-media or realistic or abstract. I like all of it. I like to play around with different things.”

She went back to college in her 40s to become a secondary art teacher, and ended up doing substitute teaching for many years.

Cynde described her love of singing as an art form. She sang with Rogue World Music Ensemble for ten years. She loved that the ensemble offered both singing and dancing from many cultures, from South Africa to South America, from Croatia to American jazz music.

I asked to see samples of some of Cynde’s other art. She shared with me this recent work. The first photos are small art flags on canvas, printed with her own hand-carved stamps and acrylic paint added. They can be framed on a wall or tied together and are meant for indoor use. The small art flags are 5 x 8 inches, and larger ones are 8.5 x 14 inches. To purchase her artwork, or to ask her about painting a mural for you, text or call her at 541-482-8132.

“I would love to do another big mural someday,” Cynde said. If you are impressed by her work on this mural, please make a note of her phone number above.