The McCall House garden in the 1890s 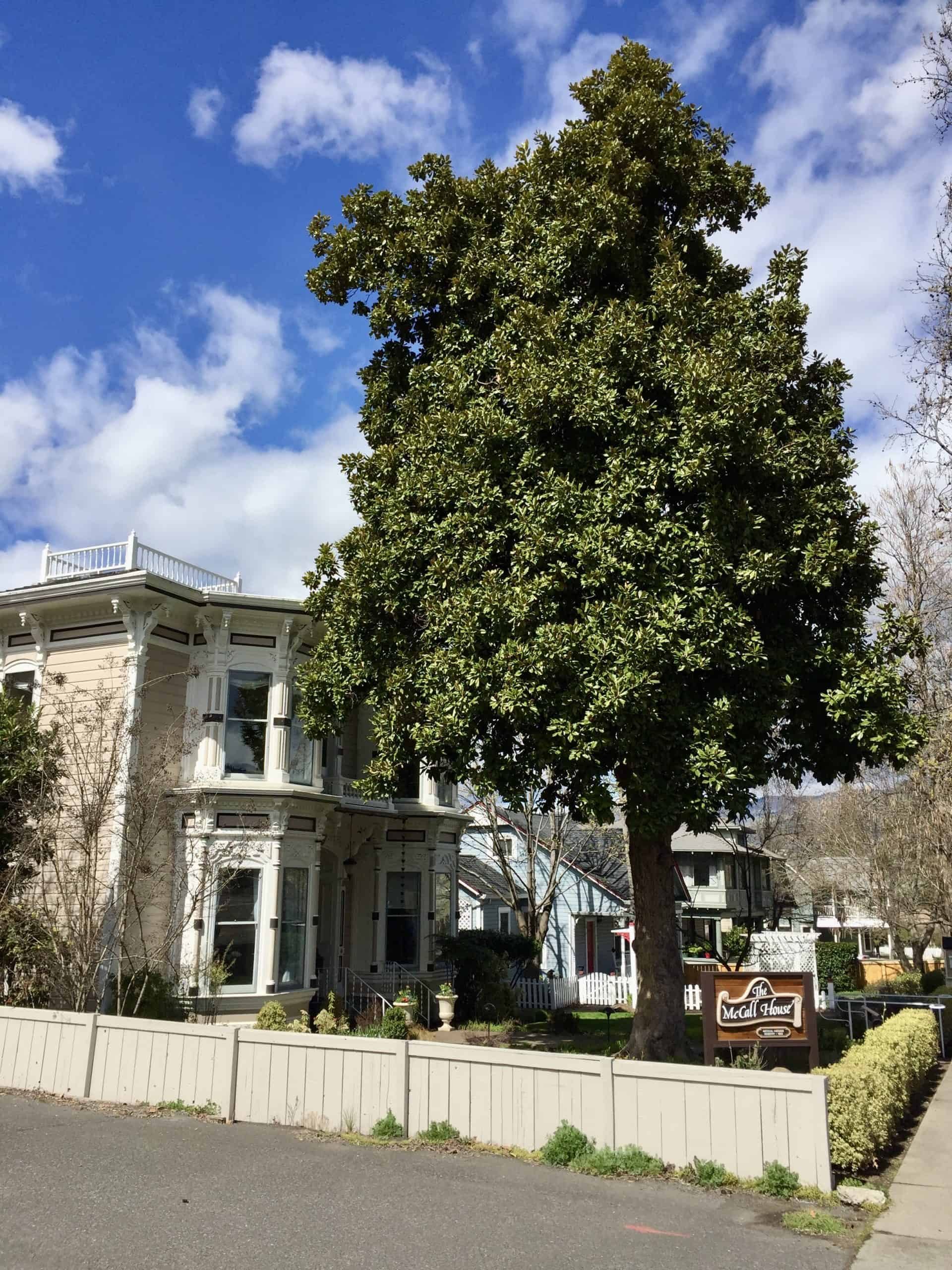 Picture the McCall House at 153 Oak Street if you are able to. If you are not able to picture it, please take a walk or a drive or a bicycle ride to see this historic house across the street from Northwest Nature Shop and two houses from Lithia Way.

Now let’s do some time traveling, back to the 1850s. John McCall came to Jackson County in 1852, crossing the plains in a grueling four to five month journey with oxen-pulled wagon. Mary Elizabeth “Lizzie” Anderson made the long trek with her mother and siblings as an 18-year-old in 1854. Both John and Lizzie had short first marriages due to the death of their spouses. The two were united in matrimony on the 100th anniversary of the United States, July 4, 1876.

John was a prominent businessman, Ashland Mayor and State Representative. Lizzie was a teacher and a leader in women’s service organizations. In 1883, they built one of the fanciest homes in Ashland at 153 Oak Street. The photo below shows their house soon after it was built.

April 20, 1890 was a tragic day for the family, the day John’s 17-year-old daughter Elsie died. Later that year, John and Lizzie planted the still-thriving Southern Magnolia tree in the front yard as a memorial to their daughter.

An 1891 Ashland Tidings article I found in Lizzie McCall’s scrapbook grabbed me, first because of my interest in the historic Southern Magnolia. The Tidings reported, “The young magnolia tree at the McCall residence on Oak street is in full bloom, and the perfume from a number of very large flowers fills the air in its neighborhood. The magnolia does well here, and it is strange that there are not more of them in town.”

I was very surprised when I read the rest of this short article. The July 17, 1891 story went on to say: “Mrs. McCall has something however, still more worthy of note than the magnolia tree – a Marechal Neil [should be spelled Niel] rose tree which covers the south wall of the house with a thick mat 27 feet long and ten or twelve feet high. When it is in bloom it presents a mass of more than 300 square feet of roses in the largest size and greatest fragrance. So far as known here, this is the largest Marechal Neil rose tree on record, and as it is remarkably thrifty, its size may be yet considerably increased.”

That was a massive climbing rose: 27 feet long by 10 or 12 feet high! To be that large in 1891, it must have been planted when the house was built in 1883 – and then have grown very quickly. To put the size of the McCall’s rose “tree” in perspective, the National Gardening Association Plants Database lists the Marechal Niel climbing rose typical height as 10 to 15 feet and typical length as 5 to 6 feet. Was it actually five or six climbing roses planted side by side, rather than just one “largest on record” Marechal Niel rose? We will never know. We do know that the Ashland Tidings of those days regularly took the stand that everything in Ashland was either “the biggest” or “the best.”

Here is how the Potomac Rose Society describes the Marechal Niel rose: “[It] is a repeat blooming, strongly fragrant, deep yellow climber with very large, very double, globular blooms that nod on dainty stems.  Bred in France by Henri and Giraud Pradel, the rose was introduced in 1864 and named after a French general, Napoleon III’s Minister of War. Paul Barden described Marechal Niel as being ‘one of the first truly deep yellow repeat blooming…. and much adored as such.'”

The Ashland Tidings waxed lyrical about the McCall’s Southern Magnolia tree again on December 9, 1897. “Blizzards and zero weather in the east and magnolias in Ashland. That is about the state of the weather in the broad land this week. There is in the grounds of the residence of Mrs. J.M. McCall a most magnificent specimen of the Magnolia Alba Flora Plena [correct botanical name is Magnolia grandiflora] – a most stately tree – that has no less than 6 magnolia blossoms upon it, and in the month of December, too. It has been in constant bloom since early spring, and is undoubtedly, one of the most beautiful specimens of the variety on the Coast. The sunny south, the land of the magnolia, cannot show a better one.”

According to botanical websites, the average lifespan of Southern Magnolia trees is in the range of 80 to 120 years. The tree John and Lizzie McCall planted in 1890 to remember Elsie McCall is now 133 years old (as of 2023). In 2018, “Elsie’s magnolia” was chosen as an Oregon Heritage Tree because of the history stories it embodies.