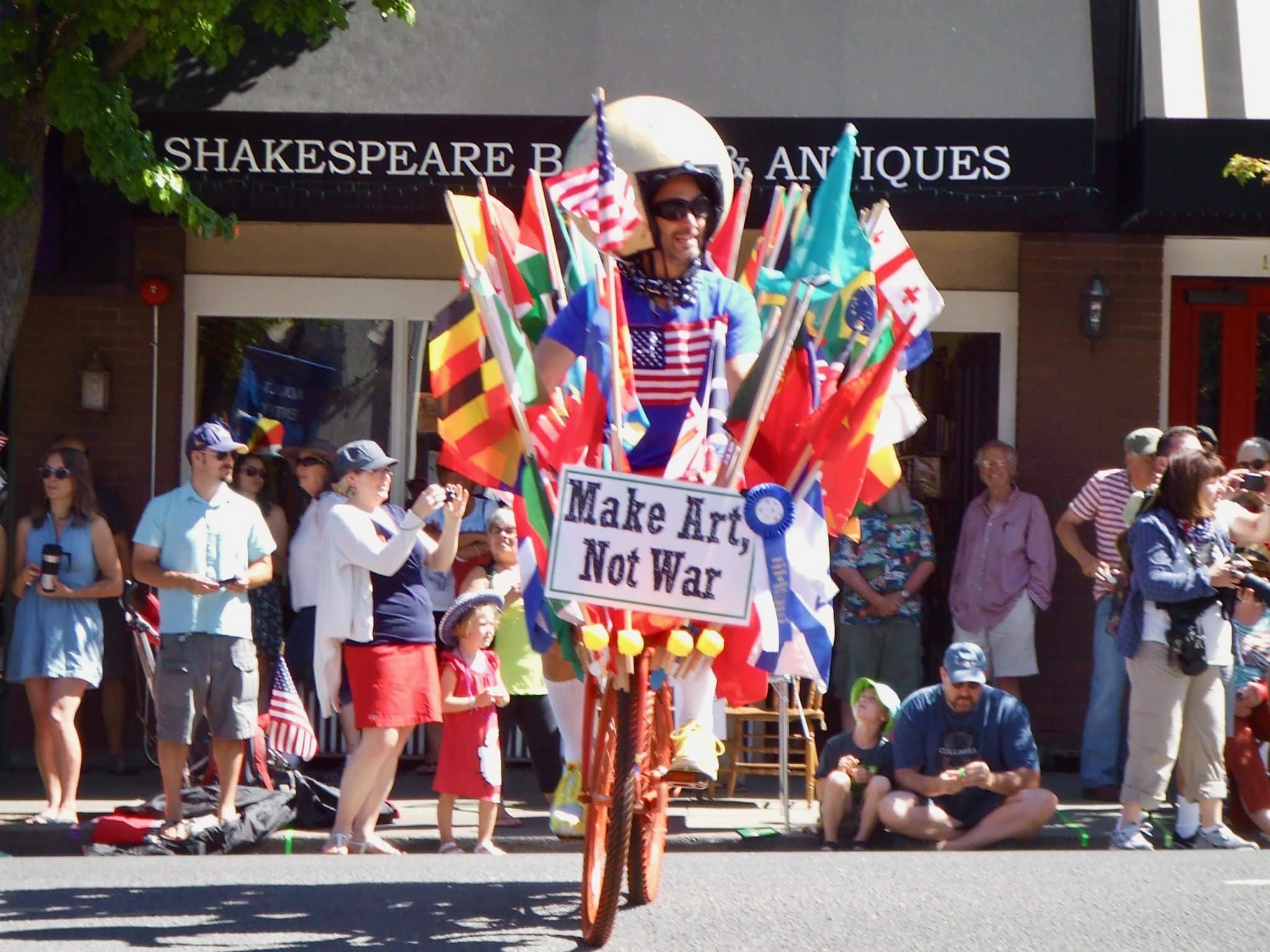 Part 1 of our 4th of July parade recent highlights ended with a Bald Eagle. We will start Part 2 with another dramatic Bald Eagle from Wildlife Images, which has been saving injured and orphaned animals since 1981. 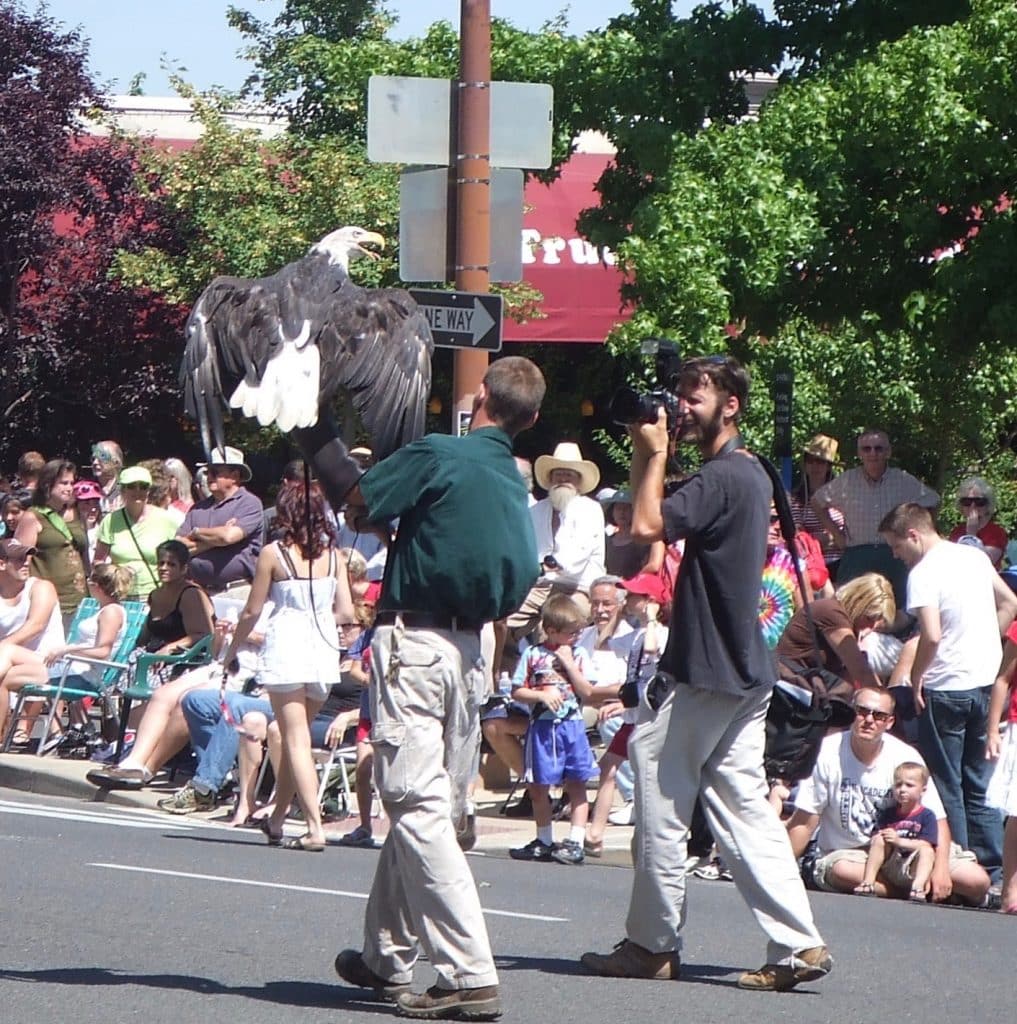 When I think of traditional parades, I think of floats, bands and horses. Ashland’s parade is definitely not traditional. We don’t do well in the “floats” category. We do better in the “band” category. Thanks to the Ashland City Band and American Band College (photos shown in Part 1), we get to hear some rousing band music as we watch the parade go by.

Thanks to El Tapatio Mexican restaurant, we also have horses in the Ashland parade most years. These are beautiful horses, even dancing horses that really impress me. Enjoy the brief video clip below.

Dogs of All Shapes and Sizes

Then we get into dogs of all shapes and sizes. Here are a few to refresh your memory of funny dog moments from parades you have attended. I remember in the 1990’s a community group used to walk with 15 to 20 wiener dogs (okay, dachshunds). I was always amazed that those short-legged, sometimes big-tummied dachshunds could walk the entire parade route. Below you will see a genuine 4th of July “hot dog.” 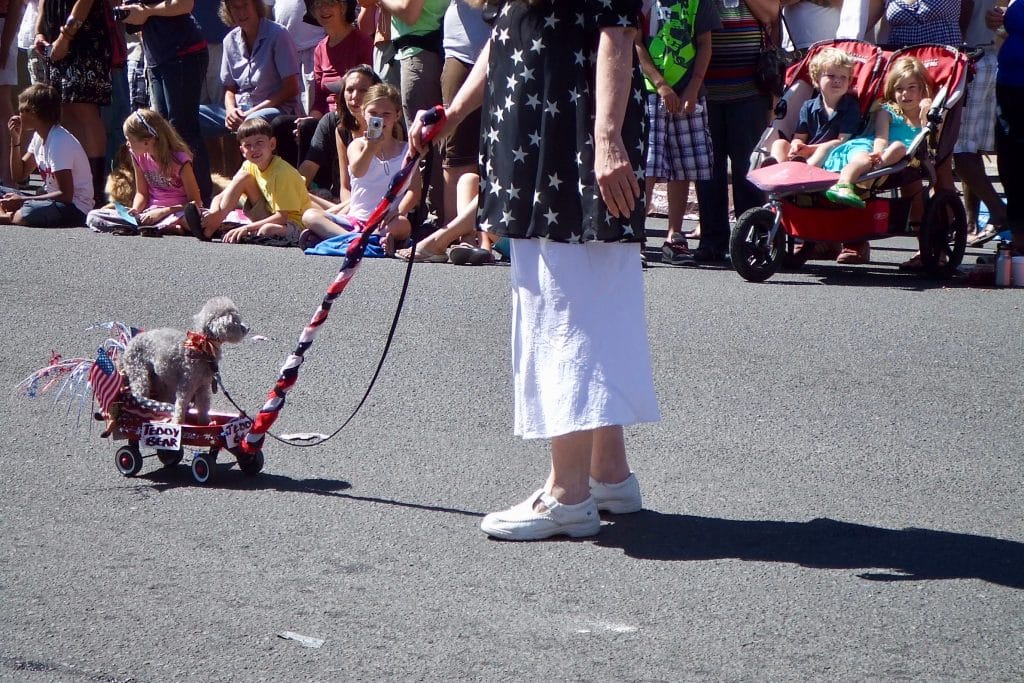 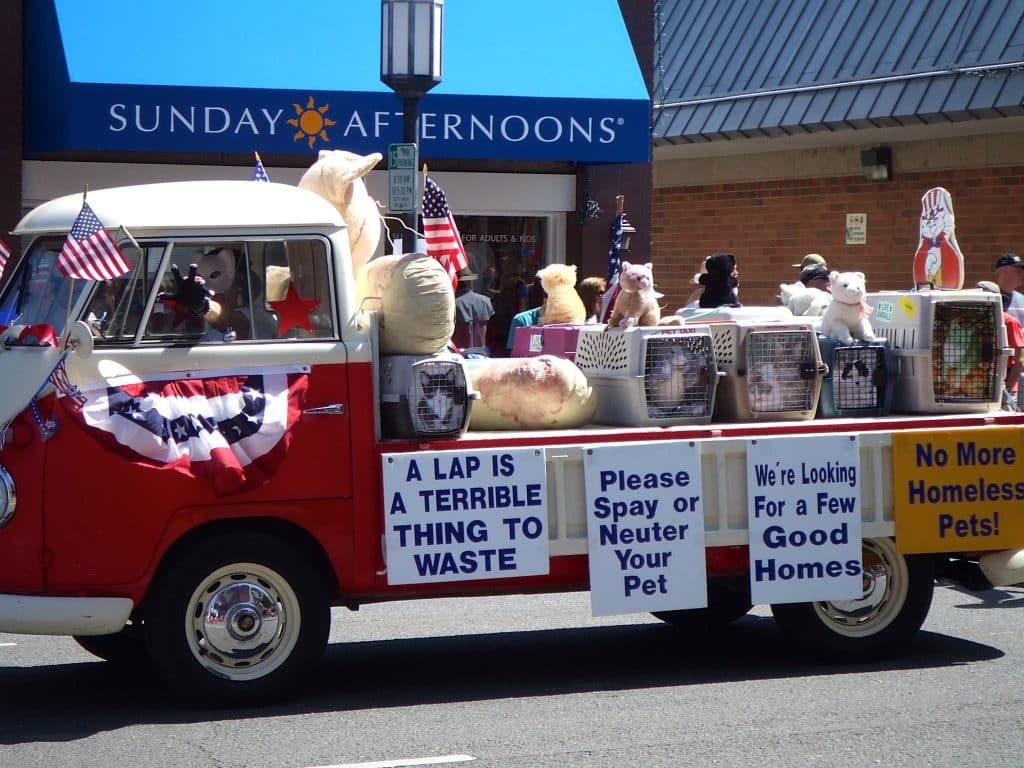 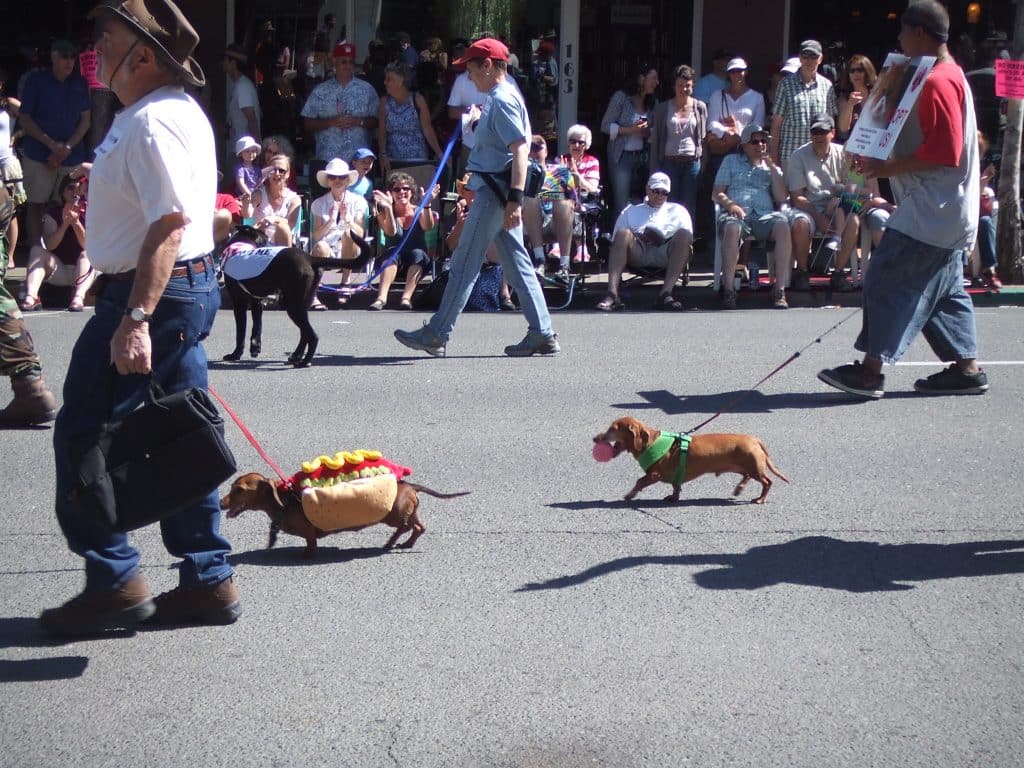 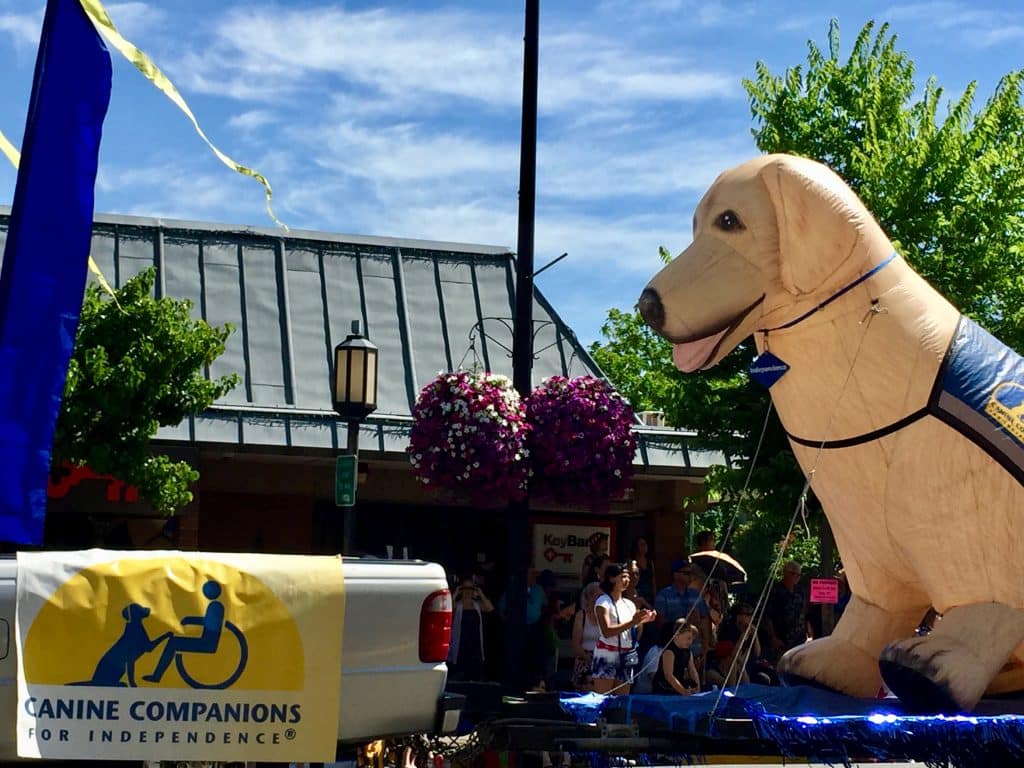 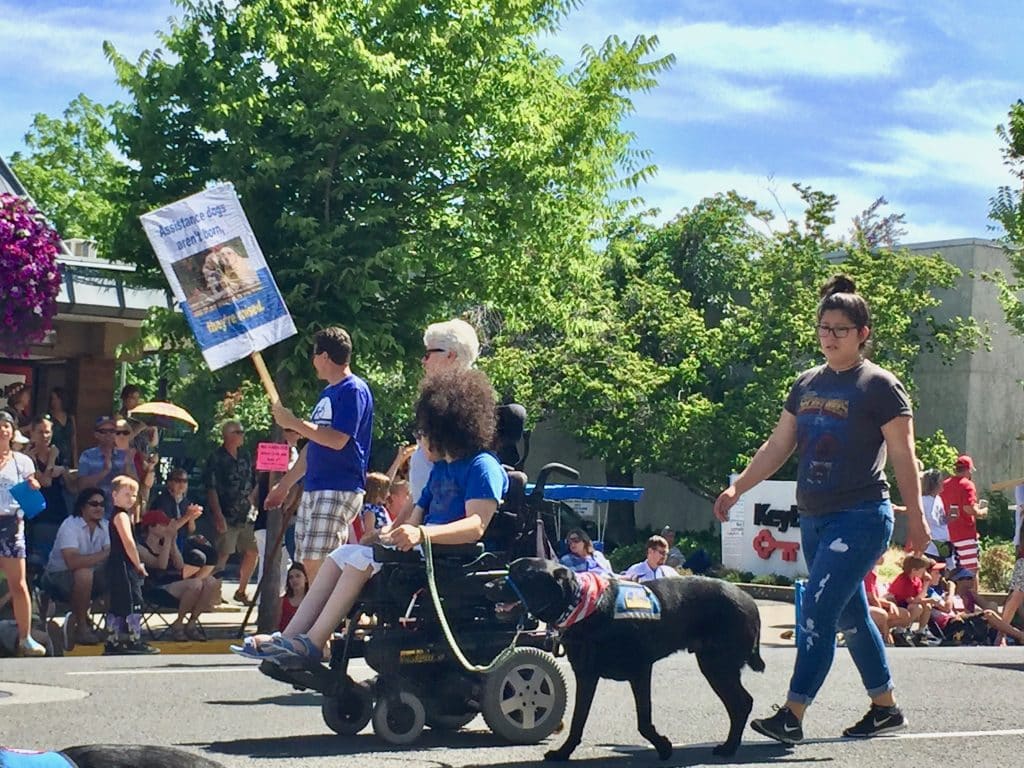 This is not a horse photo. This is a real princess riding a real unicorn. They graced us with their presence here in the rough and tumble “real world” back in the 2006 parade. 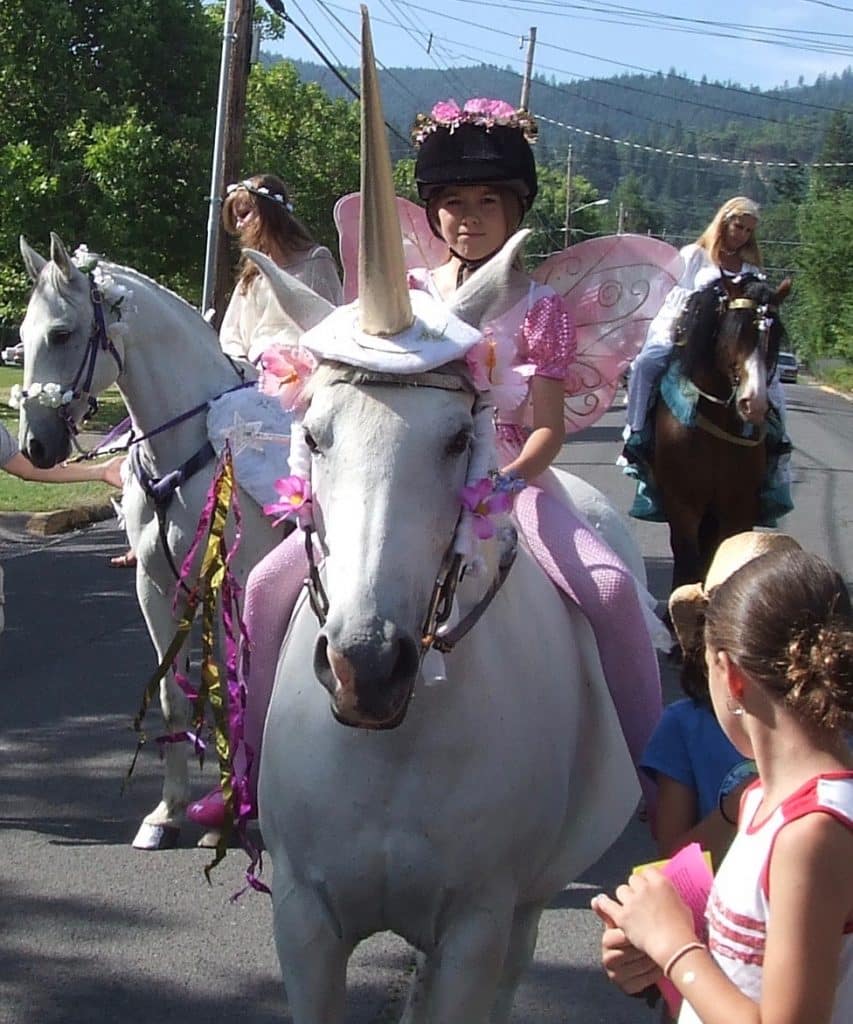 Here are photos of an assortment of community groups and students from years 2011 to 2017. I am sure you will recognize many of them. You might even be active in one or more of these community groups. 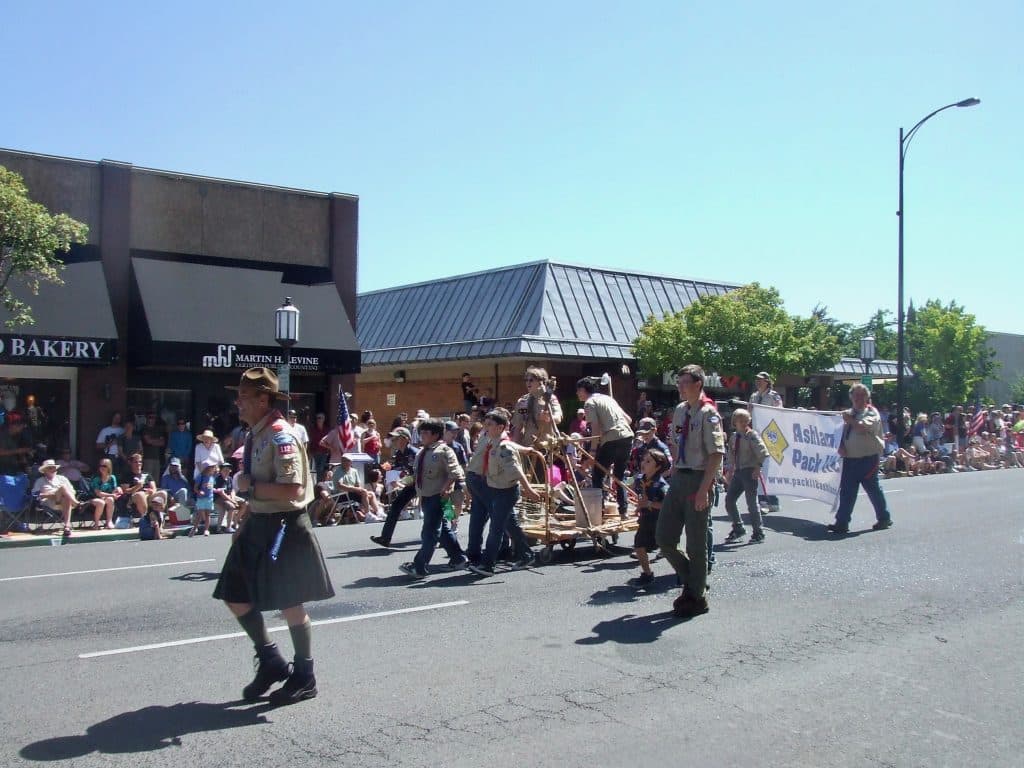 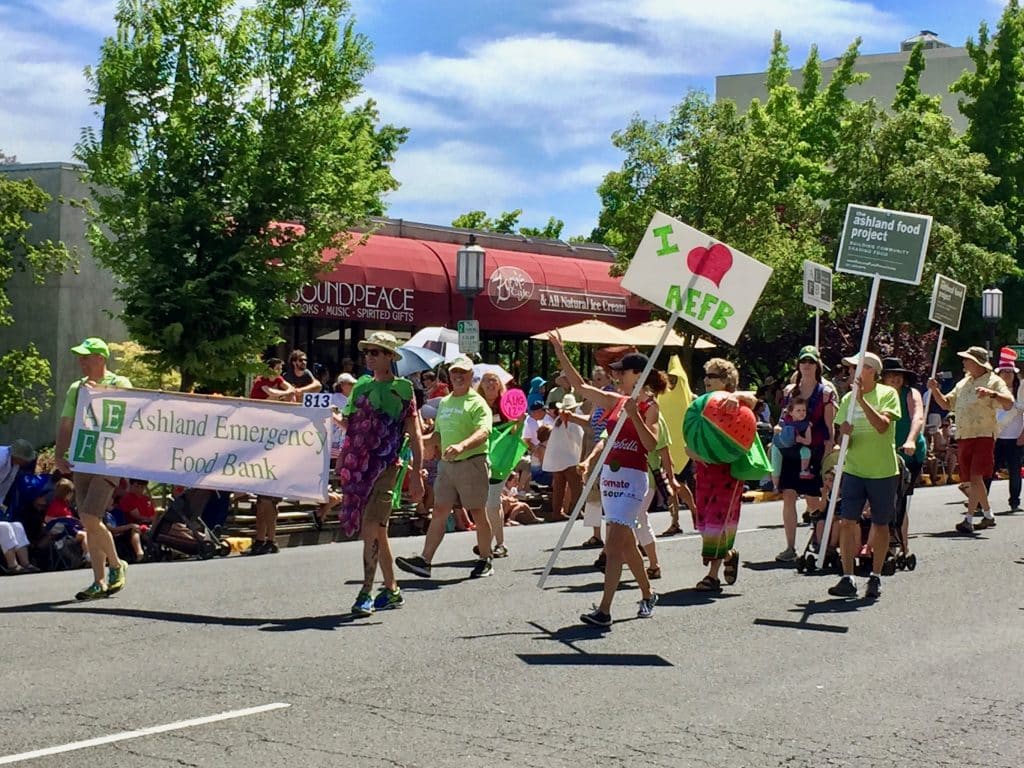 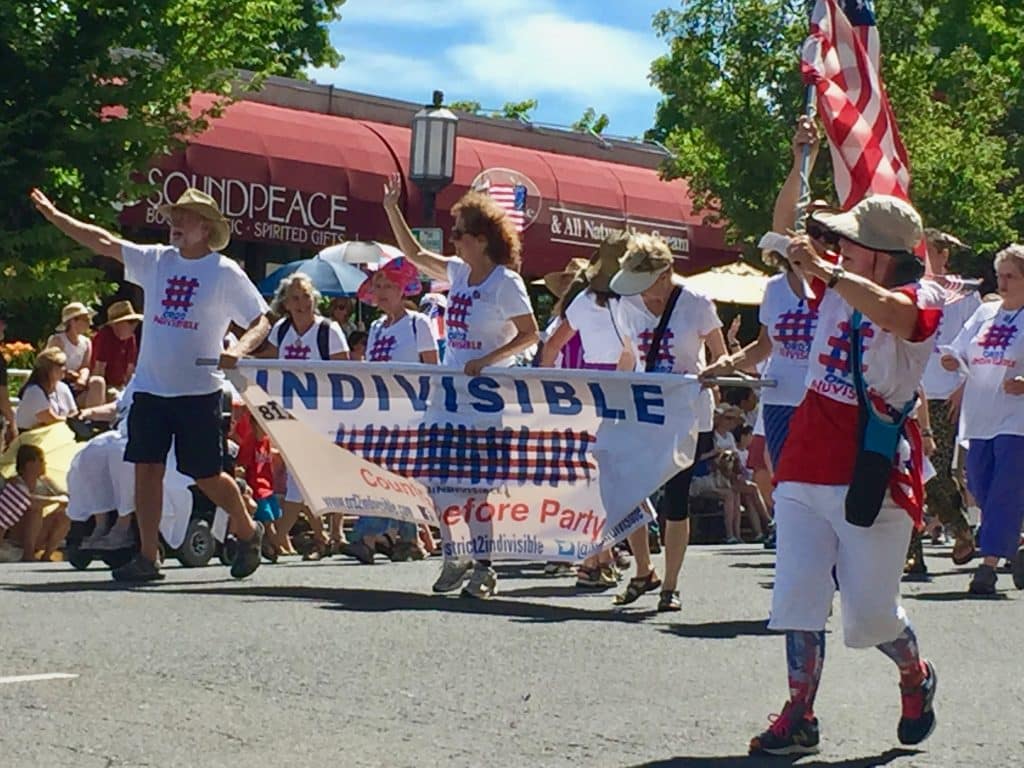 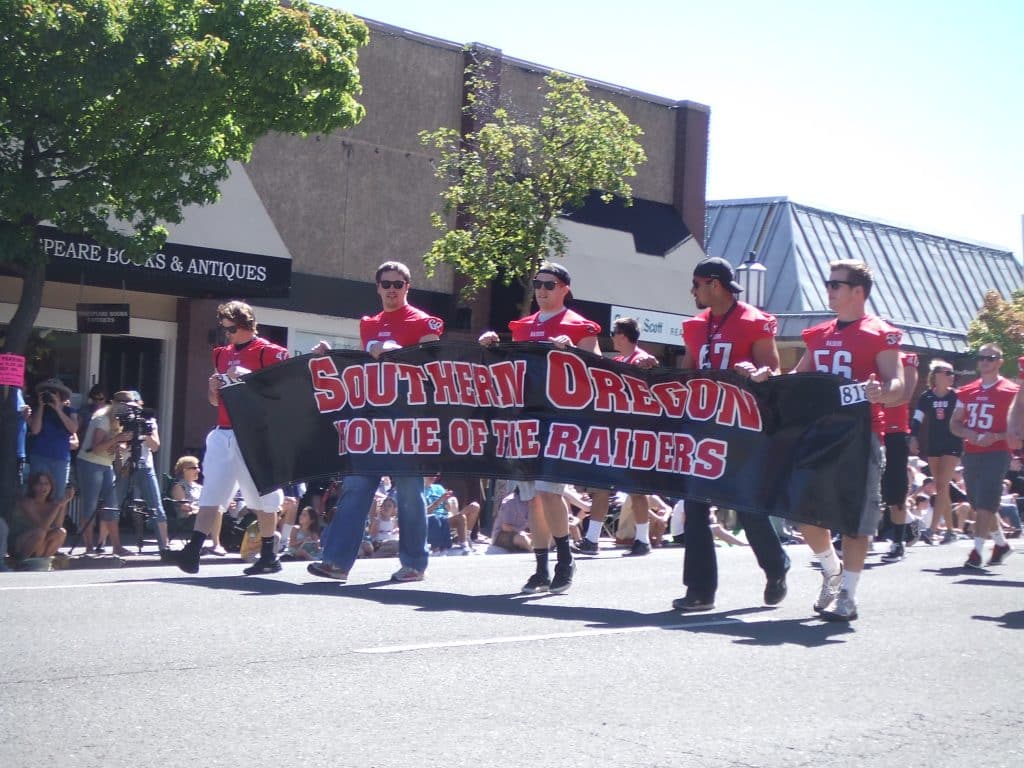 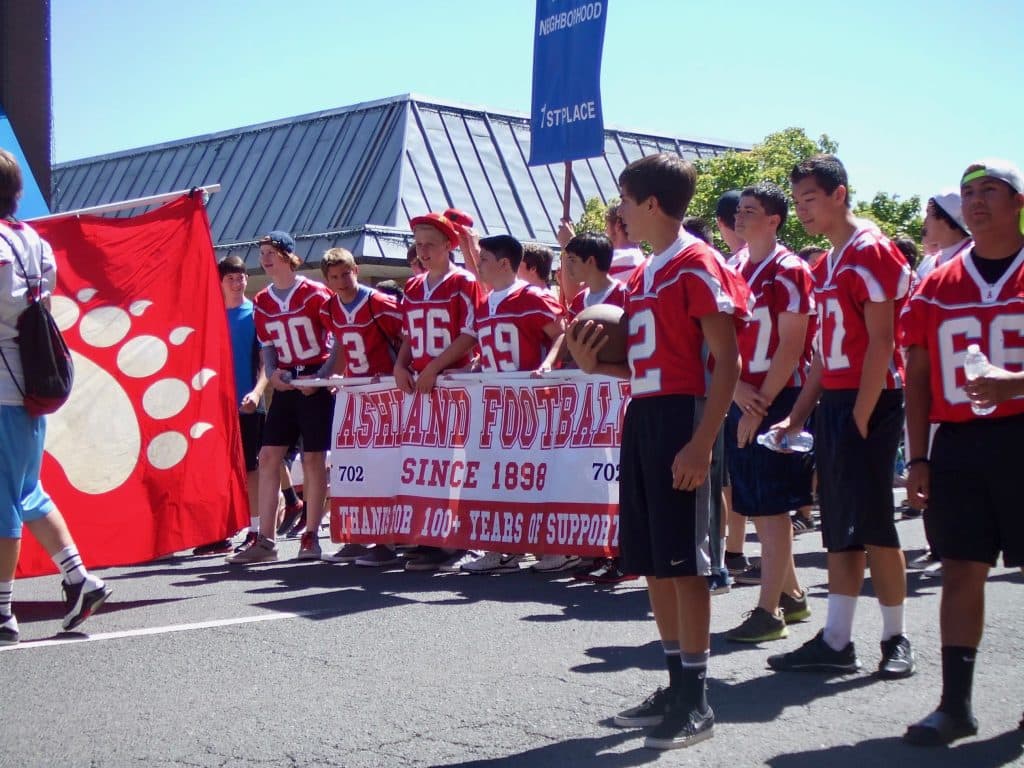 Two Ashland businesses stand out for me as I remember many years of parades. I already mentioned one – El Tapatio Mexican restaurant – in connection with horses. They also bring colorful Mexican dancers who brighten the parade with their traditional dresses.

The other business that has grabbed my attention through the years is Southside Tattoo. I am not personally a tattoo aficionado, but I have enjoyed their souped up cars and motorcycles. 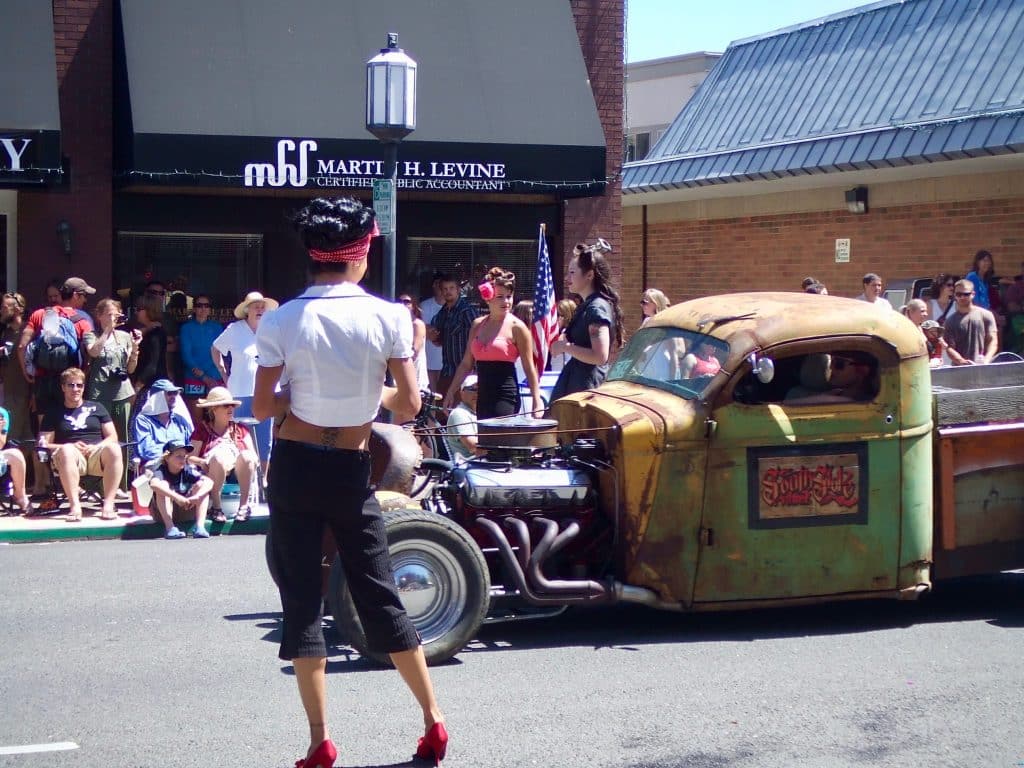 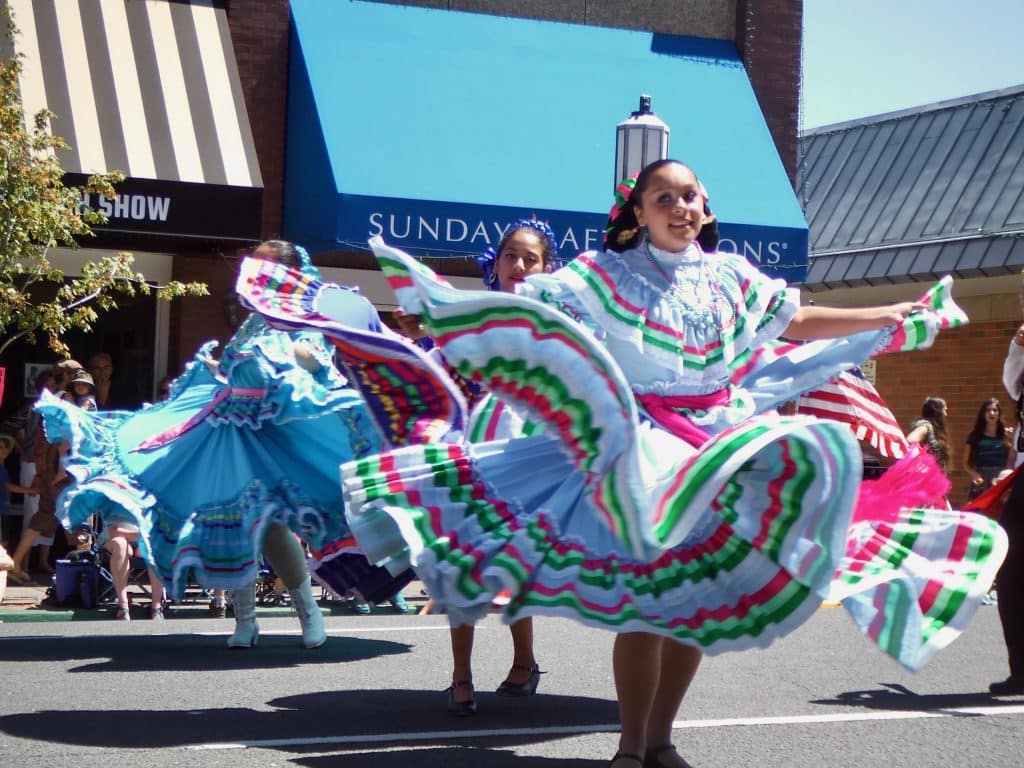 El Tapatio restaurant has beautiful dancers in the parade, in addition to horses, cars and more (2014)

Many kids love big trucks, especially fire trucks. Ashland Fire & Rescue comes through with at least one big, bright, red fire engine each year. I remember years ago seeing a dalmation in the driver’s seat. In recent years, several youth have had the thrill of riding in the fire engine and waving to the crowd (but not driving the truck). 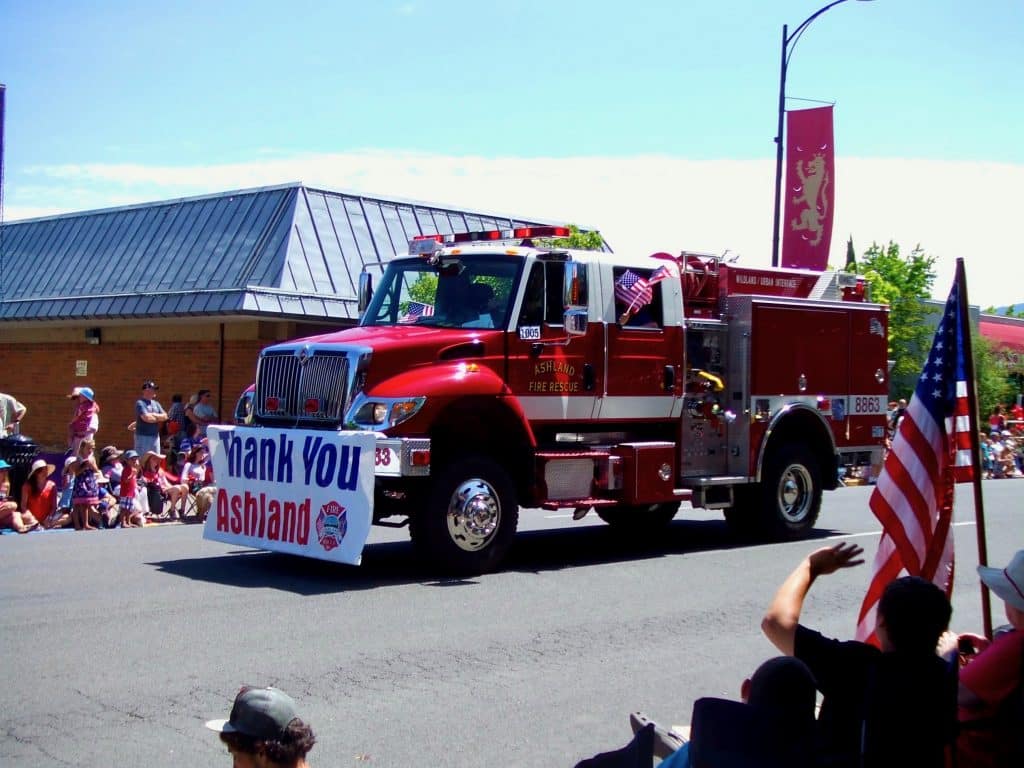 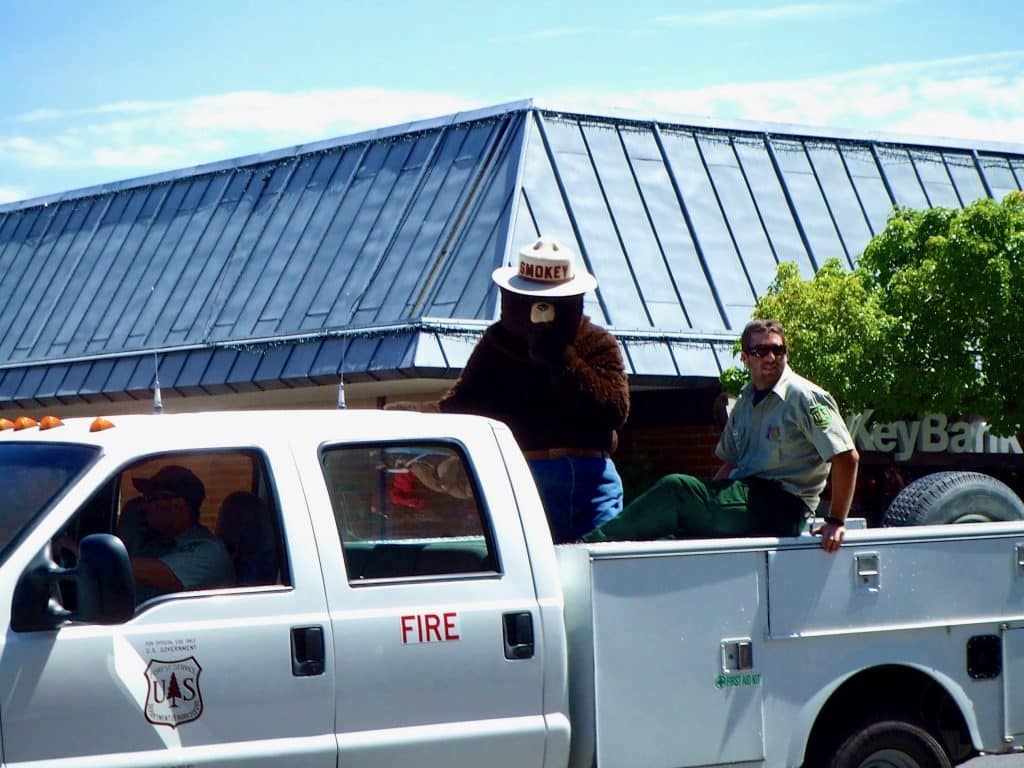 Judging from Ashland parades, many young girls (and a few young boys) participate in dance classes and gymnastics. Seeing their enthusiasm and the moves of the older teens is one of my favorite parts of the 4th of July parade each year.

When you see the photos and video below, or when you see them in the parade, remember that they are doing dance moves and flips on hot pavement, generally on a hot day, for 1.1 miles. 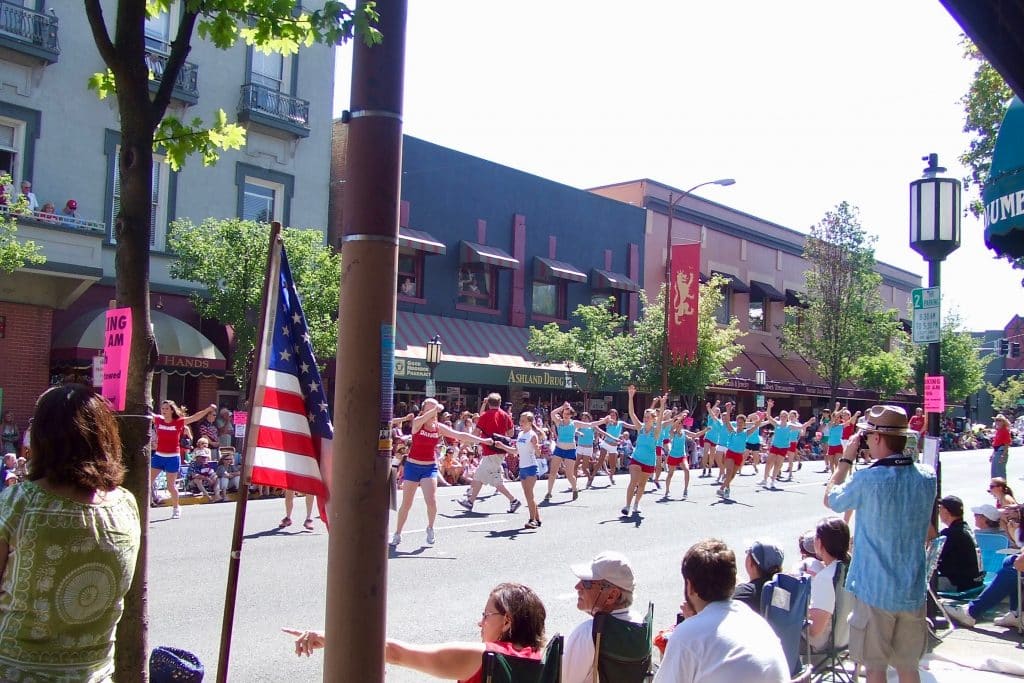 Here are the entertaining youth dancers (2009)

Serious gymnastics skills on hot pavement for a 1.1 mile parade (2016)

I will close with photos of people who are making a statement. 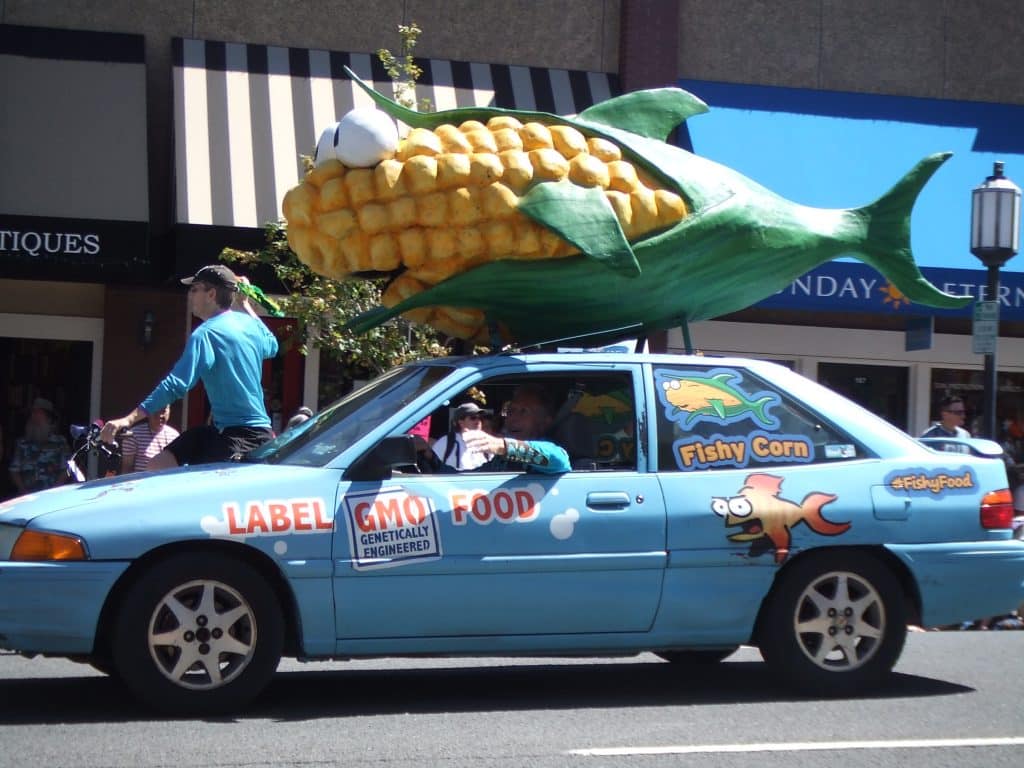 The non-GMO movement is strong in Ashland (2014)

For many years, the colorful and lively drum and dance group called Samba Like It Hot was the final group in the parade. As they went by, people flowed out from the sidewalks into Main Street and followed them to the Plaza — and then on to food booths, craft booths and music at the Lithia Park bandshell. 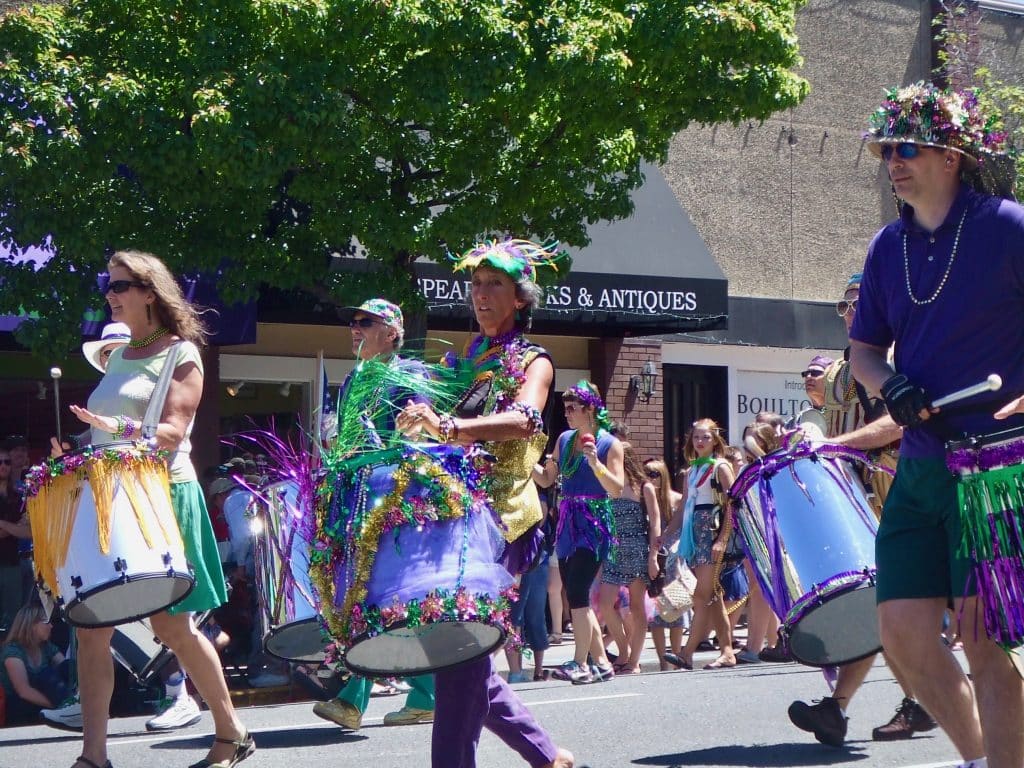 For many years, the Samba Like it Hot drummers and dancers have closed the parade (2012)