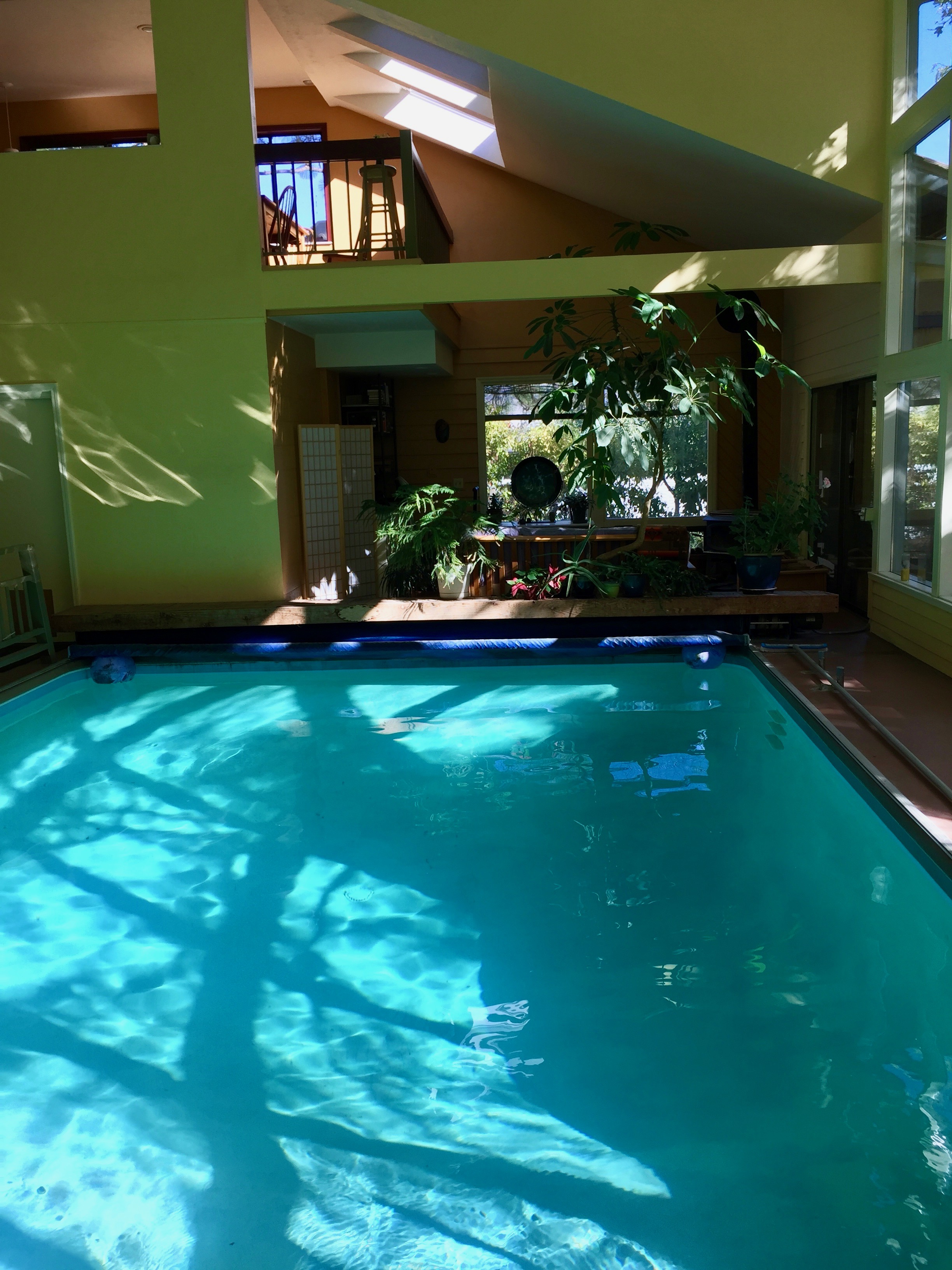 Article highlights:
101-year-old Mrs. Fader tells me stories, plus…
The Pool’s bought a pool with help from Poole

Holly Street starts at Terrace Street just a few blocks from downtown, and goes downhill about nine blocks to end at Liberty Street.  When I start walking a street, taking photos and talking with people, I never know what I will find.  I found so many fascinating stories (including history) as I walked Holly Street, that I decided to divide my article into two parts.  This is Part 1.

I met 101-year-old Mrs. Clara Fader at 338 Holly Street.  She told me that she and her husband Joseph bought the house (photo below) in 1943 or 1944.  Though her husband passed away in 1980, she and her daughters Louise and Mary still live there.

Mrs. Fader impressed on me that she and Joseph were in education for 84 years between the two of them! She taught school for 40 years and he was a teacher and principal for 44 years.

She attended Southern Oregon Normal School (now SOU), where one of her teachers was Angus Bowmer, who founded the Oregon Shakespeare Festival in 1935.  I couldn’t coax any Angus Bowmer stories out of her, just the statement: “He was really a character.”

Lincoln Elementary School was purposely built next to Southern Oregon Normal School to make it easy for student teachers to walk back and forth.  Mrs. Fader taught for a while at Lincoln School, and then for many years she was a First Grade teacher at Walker Elementary School.  This led to a good story.

The boy with the “big worm”

She described one of her students as a “bashful young boy” who came to her toward the end of lunch recess one day.  He told her: “I hope it’s okay that I went in the classroom and found an empty jar, because I caught a big worm and need something to put it in.”

Mrs. Fader had her teacher-intuition working, so she asked the boy to bring her the jar with the “big worm.”  When he did, she looked in the jar and saw a baby rattlesnake!

Mrs. Fader told the boy: “Recess is almost over so go out and play for a few minutes, and I will keep the big worm.”  She found another teacher in the hallway, who offered to take the rattlesnake to the College science department a few blocks away.  After the science department did some investigation of the rattler, they reported back to Mrs. Fader that it had enough venom in its glands to potentially kill a child.

Another under-the-radar super-hero teacher at work!

Mrs. Fader remembers that day as one of three times that the children found rattlesnakes on the Walker School playground during her time teaching there.

The house was built in the 1880’s, according to Mrs. Fader.  She and her family have made very few changes to the house, so it retains its historic character.

She recalls that after she and her husband bought the house, they started paying the City for utilities: water, electrical, sewer and more.  Well, it took about seven years before they realized that the house had its own septic system and they weren’t even connected with the city sewer system.  At that time, their house was still a bit “in the country” and the City had to install sewer pipes ¼ mile or more to connect with the City lines.  This was quite expensive.

It seemed logical to Mr. and Mrs. Fader (and to me as I was listening to her story) that they would get credit from the city for seven or so years of sewer payments for service they didn’t even use…makes sense, right?  Then that credit would be applied to the cost of linking their house with the city system.  Who knows the bureaucratic reasons, but according to Mrs. Fader the credit was not given, and it’s a sore spot with her to this day.

Mrs. Fader’s barn at 338 Holly Street (with a visitor in the photo that is not a family pet)

When the children were young, the Fader’s had a number of pets, including rabbits, goats and dogs. Here are two pet stories Mrs. Fader told me.

Goats: The baby goats grew up with her children and would follow them around the acres of orchards and gardens around the house. During the school year, the goats knew what time the kids were due to walk home up Holly Street.  They would wait in the street keeping an eye out for the Fader children walking home from Lincoln School.  When they spotted the children several blocks away, they flew down the street to meet them.  Then they would accompany the children for the rest of their uphill walk home.  Mrs. Fader told me her neighbor down the street loved to go out in her front yard after school let out just to see this sight.

The Black Lab: Among the dogs they had as pets, the college-educated black lab whom she adopted later in his life was the most memorable to Mrs. Fader.  Yes, I do mean college-educated.

The black lab, named Christopher, made a home for himself at Southern Oregon College (now SOU).  Students would take care of the dog, and so he thrived from year to year.  Christopher had a habit of trying to visit classrooms during the day.  Most of the teachers closed their classroom doors or kicked him out, but one professor had an “open door policy” when it came to Christopher.

This was Professor Arthur Taylor, one of the most distinguished professors on campus.  He taught Social Science at Southern Oregon College from 1926 until 1963, and was Chair of the Department for many years.  He was so respected that the social science building Taylor Hall is named after him.

Now…back to the dog named Christopher.  According to Mrs. Fader, Professor Taylor left his classroom door open so that Christopher could sit with the students, as he often did.  When Christopher was forced to leave his “home” at the college, and Mrs. Fader adopted him, Professor Taylor had words of high praise for the dog.  He told Mrs. Fader (with tongue firmly in cheek): You won’t find a better educated dog than this.  Christopher has attended college for six to eight years, sitting in class with my students.

Mrs. Fader confirmed to me that he was the smartest dog she ever had!

Let’s mosey on down Holly Street for more photos and stories.

I call this photo: “The corn is as high as an elephant’s eye, and it looks like it’s climbing clear up to the sky.”  Do you recognize the song these lyrics are from?  Hint: It was an Oregon Shakespeare Festival musical in the 2018 season.  Yes, the song is from one of my favorite musicals of all time…Oklahoma.

Purple door and colorful art makes a welcoming entrance, in my book.

The Pool’s bought a pool with help from Poole

Life brought Gary and Debbie Pool a surprise, as Debbie explained to me: “When Gary and I got engaged, we thought we would sell my house and live in his, but we saw a flyer for the pool house [at 414 Holly Street] with a huge photo of the pool area with all the light and we had to see it!”

Realtor Eric Poole was Debbie’s neighbor, so they asked him to arrange a tour of the house for them.  They went, toured the house, made an offer the same day…and as the saying goes, “the rest is history.”

So in summary, the Pool’s bought a pool with help from Poole. Crazy, fun and true. 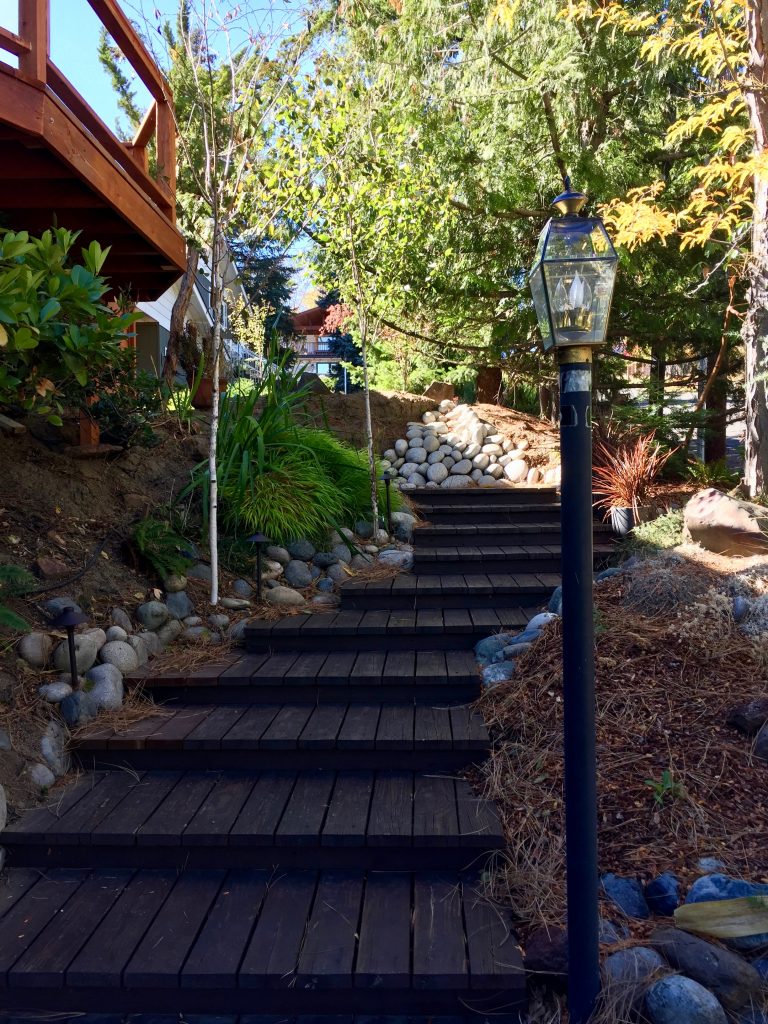 Gary is just putting the finishing touches on an attractive new front entrance (above) and a front yard deck (where I took the photo below of Gary and Debbie).

Gary received his Bachelor’s degree at Utah State University in Landscape Architecture & Environmental Planning.  That skill set took his career in a variety of directions, including doing city planning in the 1980’s.

Today he has a small landscape design and architecture business (GWPool & Assoc).  He told me that he finds his work creative and fulfilling when he is able to design and build “personal parks.” These are designs that turn a client’s yard into a delightful, relaxing oasis.

I have known Gary and Debbie for many years, and they graciously allowed me to share some photos (and a video) showing the inside of their dramatic home.

This is only Part 1 of the Holly Street story.

In Part 2, I will introduce you to Ashland’s famous faith healer, who in her day brought as many people to Ashland as did the Oregon Shakespeare Festival.  Then we will meet Carol, who has created what I call “daffodil heaven,” one of the most spectacular springtime gardens in Ashland.  Finally, we will learn about two dramatic Holly Street trees.