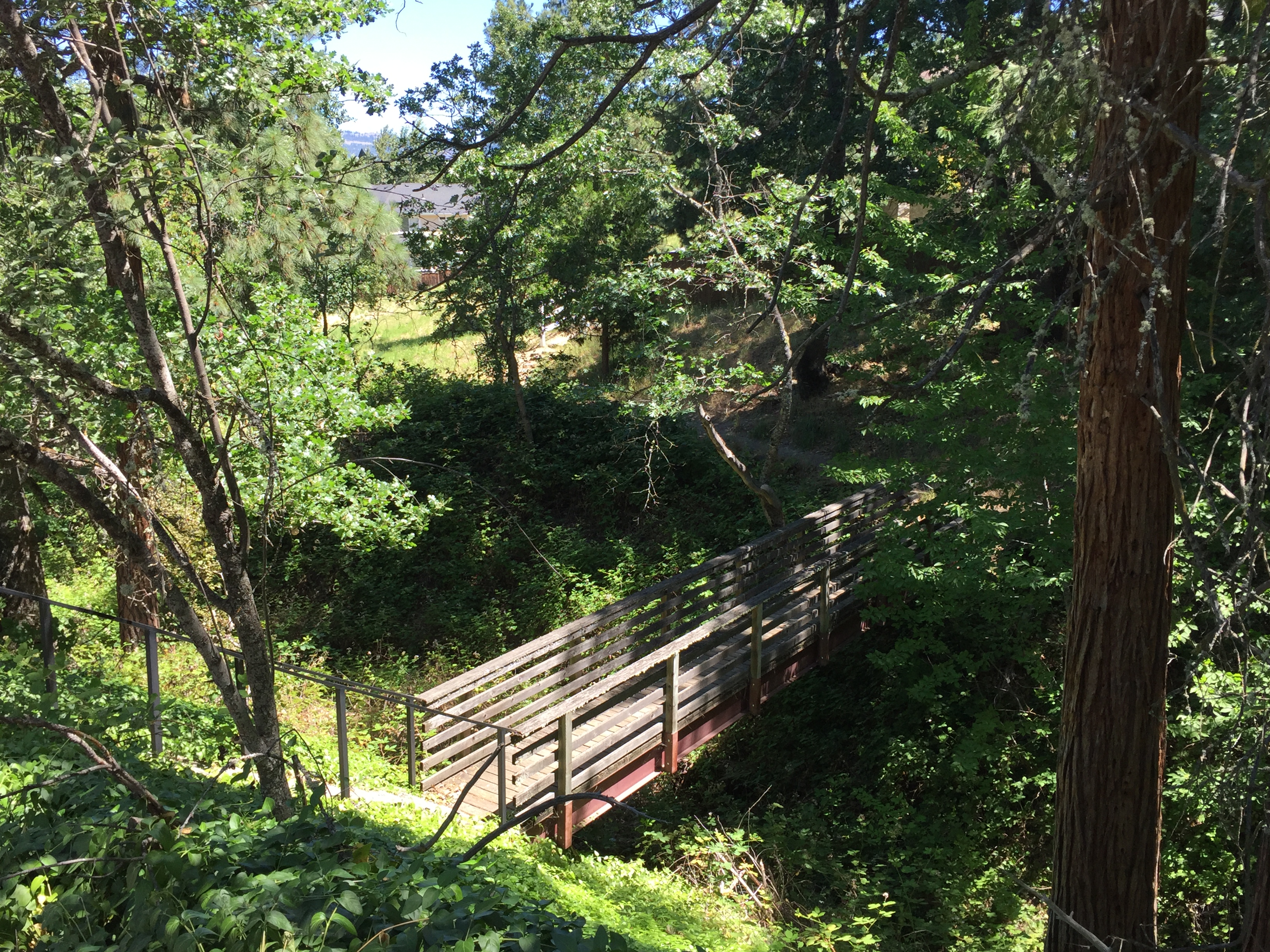 I started walking south from the Orchard Street end of Westwood Street. Westwood Street is in northwest Ashland, at the top of the steep street called Strawberry Lane.

The first thing that grabbed my attention was some antique farm equipment “yard art” at 189 Westwood Street, the corner of Westwood and Nyla. It looks like it was used to prepare rows for planting. I hope one of my readers will verify this assumption – or correct me.

Across Nyla Lane was 183 Westwood Street, where I enjoyed the architectural detail of the front entry. The overall house design had simple, clean lines.

When I walk around town, I notice signs that people post in their yards and businesses. This “Love Wins” sign in the front yard of 177 Westwood Street is not unique, but the message is worth seeing again and again, and then living as best we can.

Across from 155 Westwood Street is a sturdy bridge spanning a small gully that appears to have a seasonal creek. The bridge mystified me until I followed the path. It took me on a shortcut to Sunnyview Street.The city map shows that the path continues from Sunnyview Street to Hald Strawberry Park, which means people living on Westwood Street can take a short walk to the park. This is a good example of Ashland’s commitment to give people pedestrian shortcuts whenever possible.

I stopped for a long look at a modern log “cabin” at 135 Westwood Street. As I was snapping photos from the sidewalk, the homeowner Chuck came out of the house and we struck up a conversation.

First I got an education about how the modern log house is different from the frontier log cabin. All I know about frontier log cabins is that the wind and the cold always used to find their way through chinks between the logs. Chuck had me look closely at the Lodgepole Pine logs used to build his house. No chinks! The house is made with “D-logs” that are engineered with tongue-in-groove connections (similar to a tongue-in-groove wood floor). With logs 8″ thick, there is no need for wall insulation. The logs provide all the wall insulation needed, plus they absorb heat from the sun during the day and then radiate the heat into the interior rooms at night.

Chuck invited me inside. The first thing I noticed were the dramatic portrait photos in the living room. Then I was shocked by Chuck’s story how he acquired them.

In the 1950s, he worked at the Los Angeles Times Mirror Press. This press printed the L.A. Times newspaper and many magazines. The specialty magazine called Arizona Highways used portrait photos of Native Americans. At the time (before digital printing), the magazine printing process for these portrait photos used them in the form of glass positive prints. One day, during a cleanup at the printing company, Chuck was in the right place at the right time to see these glass positive print portraits being taken to the dumpster. He grabbed as many as he could. Now they have the respect they deserve in his beautiful home.

I thanked Chuck for his hospitality and continued walking uphill on Westwood Street. Nearby, I was struck by two different house design choices across the street from each other.

121 Westwood Street has a more complex architectural design in the variety of shapes and the window designs.

At this time of year, I see Shasta daisies blooming all over town, including in my own yard. I like the lush exuberance of the plants and the simple beauty of the daisy flowers. At 98 Westwood Street, I got my first look at what looks like a Shasta daisy with ruffles. The daisy grew next to an attractive rock-post entry gate.

My final stop on Westwood Street, before it turns the corner and the name changes to Strawberry Lane, was a pleasant surprise. First I met Lynn, who was also out for a morning walk. She lives on nearby Wrights Creek Drive, and I told her I would write about her street eventually.

Laura’s first home in Ashland was nearby on Strawberry Lane. When she decided to fulfill a lifelong dream to design and build a house, she worked with contractor Peter Mattson, who is knowledgeable about ecological construction. I could see solar panels on the roof, so I asked her what else makes it an eco house, since it looks so “normal” from the outside.

Two invisible eco features are responsible for the ability of her house to stay so cool on hot summer days. It was mid-July on the day of my Westwood Street walk, and the temperature within Laura’s house had not exceeded 76° F so far this summer. She had not yet needed to turn on her air conditioner.

One invisible feature is the 12″ thick ICF walls (made with Insulated Concrete Forms). An ICF wall might have an 8″ core of concrete, anchored with rebar and poured in place, sandwiched between two 2″ layers of expanded foam. No additional wall insulation is required. This ICF wall helps hold in the heat in winter and keep out the heat in summer.

The other invisible feature Laura proudly told me about is her ground source heat pump (GSHP, also called a geothermal heat pump). This way to heat and cool a house takes advantage of the constant temperature of the earth five to six feet below ground level. Unlike Ashland’s air temperature, which fluctuates widely throughout the year, the below-ground temperature normally stays at 50° to 55° F year round.

A National Geographic article I found online explained it like this: “Unlike ordinary heating and cooling systems, geothermal HVAC systems do not burn fossil fuel to generate heat; they simply transfer heat to and from the earth. Typically, electric power is used only to operate the unit’s fan, compressor, and pump.”

Laura explained to me that about a mile of coiled tubing is buried 5′ to 6′ deep, then connected to the heat pump in her house. I don’t understand all the science, but the constant ground temperature is able to warm the house in the winter and cool the house in the summer. Very little energy is needed to run the system, so over time it helps both the homeowner’s budget and the earth.

For those not interested in ecological houses with ICF walls and GSHP HVAC systems, let’s change the subject from home building to an old-fashioned slice of life story.

I noticed this unusual sign by Laura’s front door and asked her the meaning of “Bield.” With her story, she took me back to when she was age 13 and she lived in a small town called Bieldside in Northeast Scotland. Biel or Bield is a Scots word defined as a shelter or a sheltered place. The town Bieldside got its name for its location on the sheltered side of a river.

Therefore, the sign by the front door that says “Laura’s Bield” means “Laura’s Shelter,” and brings her sweet memories of her time living in Scotland.

While in Scotland, she was introduced to poet Robert Burns. He is most famous for preserving the traditional song Auld Lang Syne, which is sung round the world on New Year’s Eve.  Considered the “national poet of Scotland,” Burns was born in 1759 and wrote hundreds of songs and poems before his death at the young age of 37. The word “Bield” (shelter) on the sign by her doorway not only connects Laura with the town of Bieldside, but also with a Robert Burns poem called “Bessy and Her Spinnin’ Wheel.”

After Laura told me of her fondness for this poem, I had to go home and look it up on the internet. Burns wrote Bessy and Her Spinnin’ Wheel in 1792, in the Scots dialect. Here are the first and last stanzas of the poem, first as written in the Scots dialect, and then my rough translation into American English. I highlighted the words “biel” and “shelter” in bold.

Wi’ sma’ to sell, and less to buy,
Aboon distress, below envy,
O wha wad leave this humble state,
For a’ the pride of a’ the great?
Amid their flairing, idle toys,
Amid their cumbrous, dinsome joys,
Can they the peace and pleasure feel
Of Bessy at her spinnin’ wheel?

With little to sell, and less to buy,
Above distress, below envy,
Oh who would leave this humble state,
For all the pride of all the great?
Amid their flaring, idle toys,
Amid their cumbrous, noisy joys,
Can they the peace and pleasure feel
Of Bessy at her spinning wheel?

I will close with a description and photos of Laura’s simple and colorful front yard garden. Following the ecological theme, Laura’s garden contains a variety of native, deer resistant and low-water-usage plants. The garden was designed by Jane Hardgrove, landscape designer and watercolor artist. The flowers bloom one after another throughout the spring and summer.

Finally, as we were saying goodbye, Laura looked across the street and told me she loved her location because of the “big front yard.” Her “big front yard” is Westwood Park, an unimproved park owned by the City of Ashland.