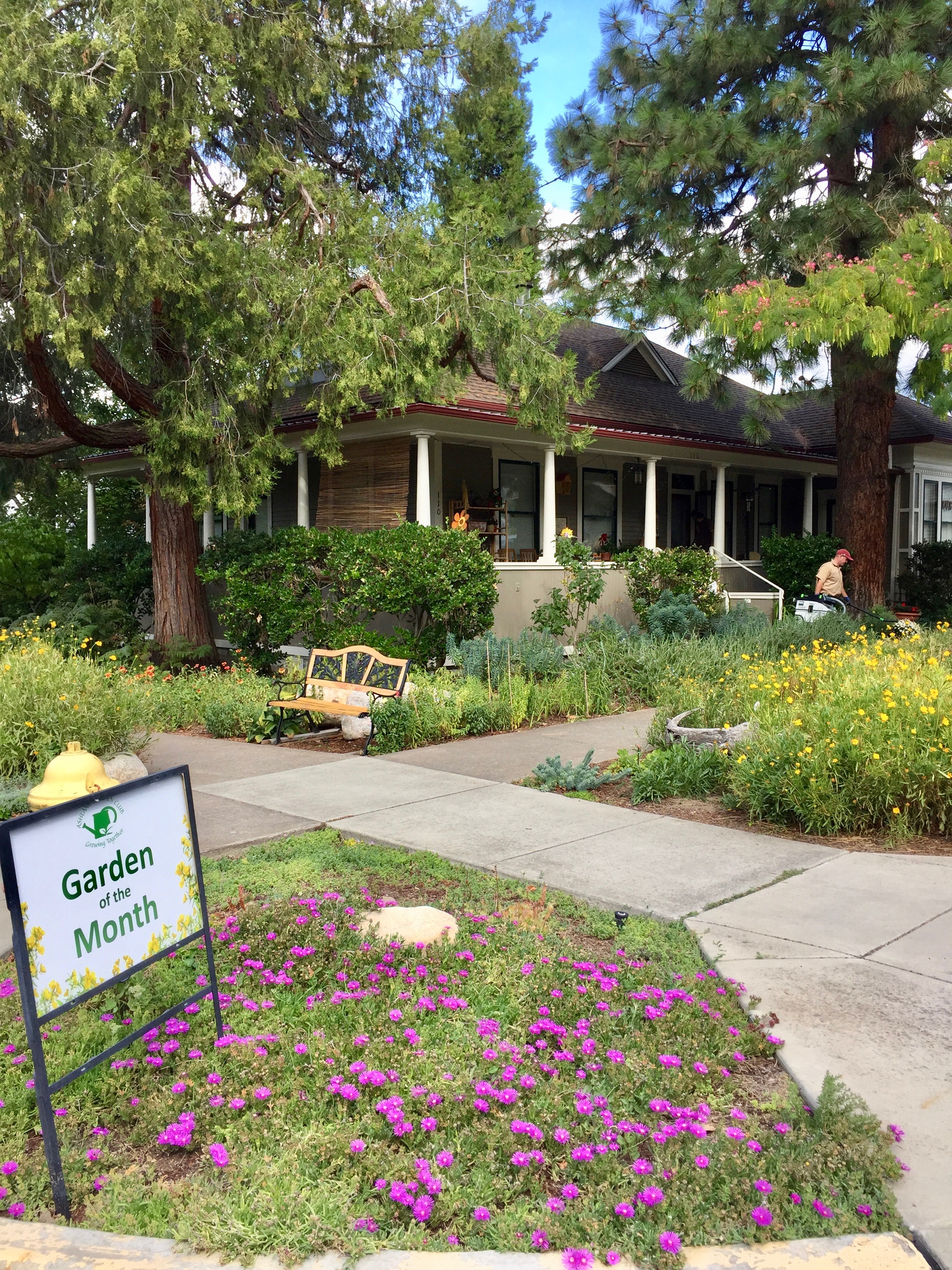 See the Garden of the Month for September 2019

Adding the first Railroad Addition building plots in late 1883 was a major increase in the size of the town. Town leaders saw the need for this when construction of the railroad south from Portland was nearly finished. The second section of the Railroad Addition, up to 8th Street, was added in 1888, after the railroad tracks connecting Oregon and California were completed.

Impact of the Railroad

Due to Ashland’s site at the base of the long Siskiyou Mountain range, Southern Pacific Railroad made Ashland both a train stop and a maintenance yard.  According to the Ashland Tidings of January 4, 1889: “Ashland is the eating station for all passenger trains and a thirty minute stop is made here by every train.” Dozens of new railroad workers chose to build, buy or rent homes in the Railroad District near the train station. Mostly due to the coming of the railroad, Ashland’s population more than doubled between 1880 and 1890, from 842 to 1,784.

Let’s walk 8th Street now. We will start at the Rogue Valley Roasting Company at the corner of 8th and East Main Streets, then head north towards A Street.

The first house on the right is 92 8th Street. It was built as a rental house about 1909 for Mrs. Lou Reader, the wife of a prominent Ashland doctor.

In 1930, John and Callie Winters purchased this house. They owned the grocery store right next door at the corner of 8th and East Main Streets, so they didn’t have far to go from home to work! This corner store was later Johnson’s East Main Market, owned by Swede Johnson. Many current Ashland residents remember stopping by Swede’s store as children on their way home from Lincoln School or the Junior High School. The former small grocery is now the site of the Rogue Valley Roasting Company business.

Garden of the Month

Across C Street on your right, you will come to Ashland Garden Club’s September 2019 Garden of the Month.

Ruth Sloan of the Garden Club wrote: “By September, most gardens are starting to fade, at least, and some are downright shabby.  But not Kelly and Jeff Straub’s gorgeous place at 110 8th Street.  Kelly’s diligent work shows to good advantage all year.  She keeps the planting areas well groomed, and always a delight to see with blooming plants.”

Ruth Sloan continued: “A special quality of this property is that the “parking strip” (the area between the sidewalk and the street) is especially wide, making the sidewalk appear to go right through the heart of the front and side yards. This does two things: It makes the parking strip more versatile as a desirable planting space and it also makes pedestrians feel a part of the garden. Being a block from a popular coffee shop also increases foot traffic, and Kelly enjoys interacting with passersby as she works in the garden. Understandably, she gets a lot of positive feedback.”

When you take a break from admiring the garden, look at the historic house. Built in 1905, it is known as the Engwicht-McMillan house.

George Engwicht, a conductor for the Southern Pacific Railroad, built the house in 1905. He sold the house in 1908 to another railroad employee, A.A. Conger. Conger lived there only one year.

In 1909, Alexander and Eva McMillan moved from Montana to Ashland and bought this house. Mr. McMillan was born in Scotland in 1850 and came to the United States as a small child. In the early 1900s, he owned a sheep ranch in Montana. The sale of the sheep ranch gave the McMillans enough money to buy 110 8th Street and retire in Ashland. Alexander McMillan lived in the house until 1932, when he died at the age of 81. Eva McMillan continued to live here until her death in 1950.

Across the street, behind a hedge and lush foliage, is a hidden historic house with a large garden. Known as the Osmer and Lila Long house, it was built around 1901. Osmer Long was a brakeman for the railroad. So far in just the first three houses on 8th Street, we already know of a railroad conductor, a brakeman and another railroad employee who have lived in these houses. Yes, this is the “Railroad District.”

Built about 1904, the first owners of 130 8th Street were not railroad employees. One was a painter, the second a plumber. The architecture of this house is considered to be vernacular bungalow style.

You can see similar architecture in the house next door, built – or possibly moved to this location – in 1948.

Across the street is a dramatic old American sycamore tree (or plane tree), in front of the oldest house on 8th Street. 143 8th Street was built about 1890, and its best-known owner was Caleb Porter, a conductor for Southern Pacific. The Porter family owned the house for about 50 years, until 1955.

The house has been beautifully restored at some point in recent years. I enjoy the vine being trained around the front windows into what my eyes see as a heart shape.

The house at 155 8th Street was built about 1903. The builders added a few Queen Anne elements to the basic vernacular style of the time.

Elmer Harrington worked on trains at the Southern Pacific roundhouse in Ashland. He built the house at 156 8th Street in 1907, but for some reason he sold the house the very next year.

I like the way this tree, garden and house complement each other. It is a large, 1990s Craftsman style house that is designed to fit into the historic neighborhood. To me, the tree feels like part of the house. Take a look and see if you see this too.

8th and B Streets Yard Art

Though this house has a B Street address, the yard art along 8th Street is too good to pass by without a smile and admiration for the creative spirit.

I am impressed by the healthy wisteria vine that was planted at the base of this large tree. Wisteria vines are normally trained to grow along a roofline or a fence. I have never seen one climbing a tree like this one does.

8th Street ends at A Street and Railroad Park, where you can find a lot more history. To read about the history of the railroad in Ashland, go to this article.

Many of the homes on 8th Street are at least 100 years old and have seen the march of time bring many periods of boom and bust to the Railroad District. Architects describe most of the older homes in the Railroad District as the “vernacular” style. Vernacular might be called a non-style style. Here is a more technical definition. “Its meaning is flexible according to the situation; but in essence, ‘vernacular’ means an unaffected, unselfconscious, unaccented way of building….it is the use of architectural style without being conscious of style.. .(Gowans, 1986:41)”   [from the National Register of Historic Places, Ashland Railroad Addition Historic District, 5/6/1999, Section 7, page 2]

As the homes were being built on 8th Street, a business district was also built near the intersection of A Street and 4th Street, just four blocks away. By 1890, residents of 8th Street could find nearby a grocery, a stable, restaurants, lodging houses, even saloons. I will have several articles about 4th Street coming up soon at WalkAshland.com.

If you love gardens, I would encourage you to join me as a member of the Ashland Garden Club. You can learn about the Garden Club and find the link to their membership form here at the club home page.