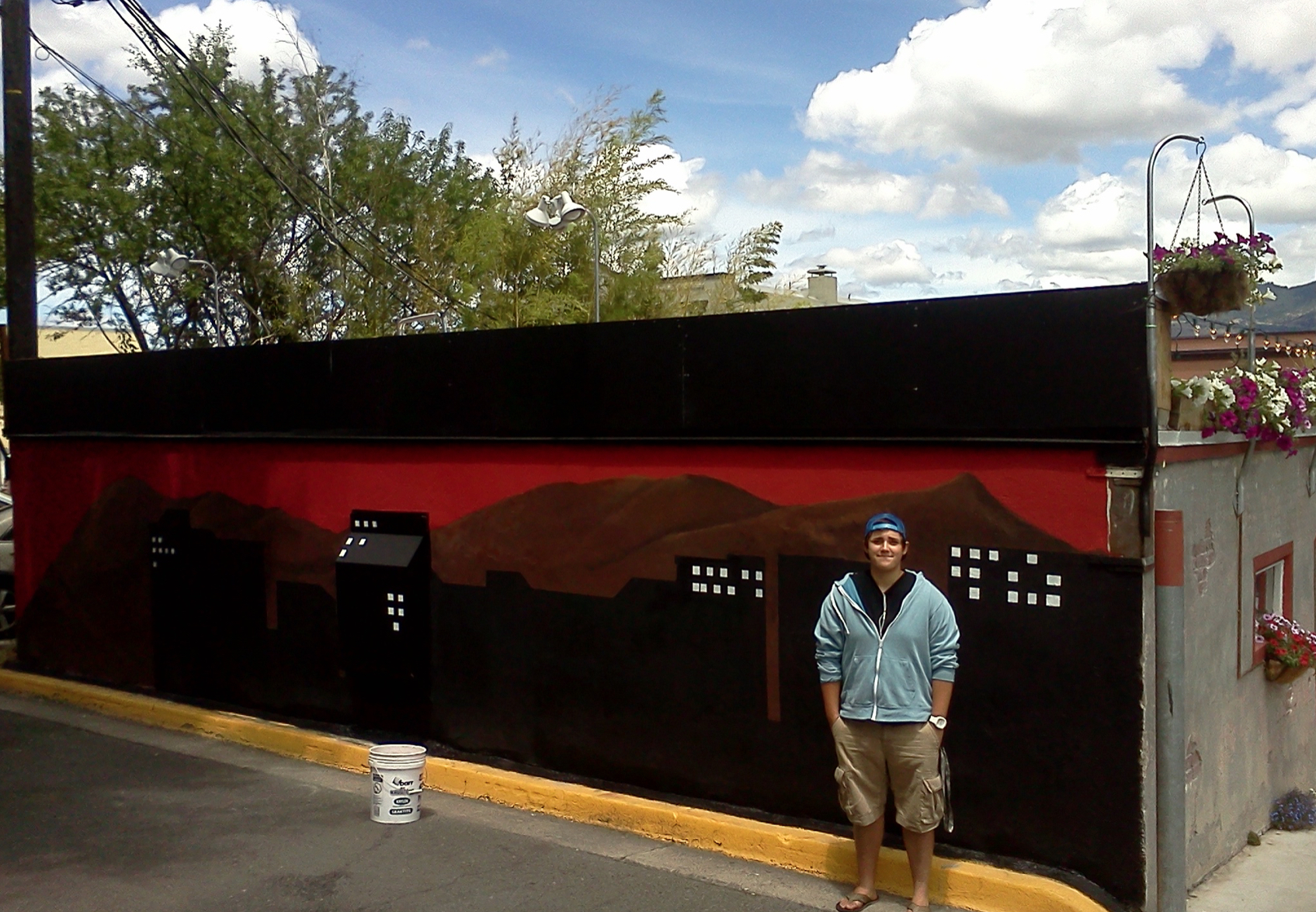 “A lot of people have their high school senior project, and it’s like, one and done. You don’t really think about it again. But this is something that will be on the wall for a very long time. It’s pretty cool to have left my mark, so to speak, on the place that raised me.”

What inspired this artwork?

As Nicole (called Nick) and her father Dan walked to the Bloomsbury Coffee Shop from his Dan’s Shoe Repair shop on Second Street back in 2011, they took the shortcut along Enders Alley. She was a senior at Ashland High School, struggling to come up with an idea for her senior project, a 100-hour-plus educational commitment. Her father looked at the “grungy looking wall” on the alley side of his shop and said, “Why don’t you do a painting on here for your senior project?”

Why Nick said “Yes” to her father’s idea

Nick told me that she was motivated and inspired by Ashland High School art teacher Mark Schoenleber. As she put it, “I was really into art at the time, partly because Mr. Schoenleber created a really positive, uplifting environment that made you want to be around, even if you weren’t necessarily ‘artistic.'” So much so that she took nearly a dozen art classes from him during her high school years. She laughed as she explained that art was one of the few classes that students were allowed to repeat at Ashland High and she took advantage of that.

She loved creating art and decided it would make an interesting and enjoyable senior project. Little did she know what she was getting into.

A “nick of time” story about the shop

Dan’s Shoe Repair opened here in 2003, when Dan Shulters moved from Corvallis to Ashland. The shoe repair shop is now run by Jerry Carpenter under the name Ye Olde Cobbler Shoppe. Jerry co-owned a cobbler shop for many years in the Midwest, but had to leave the partnership. Not long after, on a below-freezing spring day, he complained to his sister about the 10-degree temperature and said he wanted to live somewhere warmer. Five minutes later, his sister called him back to say she looked online and found Dan’s Shoe Repair listed to be given for free in a small town in Oregon. Jerry told me he looked up the temperature in Ashland that day and it was 70 degrees! That convinced him to check it out. He flew out to Ashland, clicked with Alise and Dan, and bought the lease and equipment for $50.00 a couple days later (just three days before everything would have been taken to the dump!). It was a WIN-WIN, plus it kept Alise and Dan from losing their reputations and breaking their lease.  Jerry enjoys his new shoe repair business in Ashland. Selling the shop allowed Dan and Alise, who moved to Malawi in May 2018, to return on time. Dan’s story is described in brief at the end of this article.

The original brick building now has a less than perfect stucco exterior. When it was painted a few years ago, Dan decided to leave some of the exposed brick visible. To me, that choice adds to the charm of the exterior.

“A lot of people don’t realize the process you have to go through to get something like this approved.”

As a high school senior ending her 12 years of compulsory schooling, Nick thought she had chosen a relatively easy senior project. She loved art. She knew how to paint. She had a good spot to paint a mural, not too small and not too large, about 230 square feet.

“What ended up being painted on the wall was very different than the original design that I presented to the Arts Commission,” Nick told me. She had been doodling and sketching San Francisco style skylines, probably because she dreamed of going to college there after growing up in the small town of Ashland. She also incorporated bright colors and abstract elements within the initial design ideas, similar to her illustration shown below.

Everything changed when she attended the Public Arts Commission (PAC) meeting on September 16, 2011. She began to learn how different public art is than art created for oneself or for a private client. After she presented her idea to the commission, PAC asked her to prepare all of the following information and come back to their October 2011 meeting. From the minutes:

It was no longer the “relatively easy senior project” she had envisioned. However, she was committed to doing it right, so she made her next presentation at PAC’s meeting of October 21, 2011. The commissioners liked everything she presented except the design. From the PAC minutes of that meeting: “Generally the commission feels the design of an urban landscape is not appropriate for Ashland….” They asked her mural to reflect an “Ashland, small town” look.

One commissioner suggested she ask for guidance from a nationally known muralist named Robert Beckmann, who lived in Ashland at the time. It was Beckmann who painted the portrait of Shakespeare on the Bard’s Inn wall. In conclusion, the minutes state: “PAC has delayed approval of the mural until Nicole returns to the November meeting with a revised design.”

Nick did have a short meeting with Robert Beckmann. She remembers him as being very kind. For the November 21, 2011 PAC meeting, Nick presented a new design that incorporated Beckmann’s suggestion to add the hills of Ashland behind the buildings. The PAC liked the design changes and approved them.

But her challenges were not over yet.

There was still the matter of public comments to consider, which happened at the PAC meeting of January 20, 2012. Letters had been mailed to 53 properties within 300 feet of the mural site. Comments were received both for and against the mural. Here is a comment I found a bit humorous, from the PAC minutes: “The other negative comment was from a neighbor in a private home who did not want to look out her window and see the mural.  Per photos provided by Mr. Shulters [Nick’s father], it does not appear the mural is visible from her home.”

Finally, Nick’s mural was approved by the PAC on January 20, then by the City Council on February 21 – the culmination of a months-long senior project learning process that was past 100 hours of work before painting even began.

During our interview, I acknowledged the challenge of the public art process and expressed the hope that “you will be able to apply all those lessons you learned.” She replied, “So far, the experience has done me well. I had that naiveté that it’s going to be ‘one and two and done,’ which is not the case. That’s a lesson that was happily learned earlier on in my life rather than later.”

Painting happened in June 2012, the week after she graduated from high school.

The first day required thoroughly cleaning the wall, then applying a coat of off-white primer to the wall. The second day, she outlined the buildings and mountains with black spray paint.

As with other murals, the next step was painting blocks of color for the buildings, hills and sky.

During the fourth day, she added detail, shading and touchup to each section. The final step was a clear sealant over the entire mural.

For the wall, she used exterior grade house paint. She laughed as she told me that her initial small mockups had been done with shoe polish spray paint from her father’s shop!

“It was definitely a fun experience, something I’m glad I did.”

The artist shared two “secrets” with me

A favorite highlight, when I am able to interview a living artist, is learning something brand new about the artwork. Something in plain sight that I just didn’t see. Here are two “secrets” I learned from Nick.

I got my first surprise when she said, “If you’re facing down Second Street [north] looking at the hills from the mural location, it’s supposed to match up with the hills on the painting.” Here are two photos, with a sliding bar between them, so you can decide for yourself if she succeeded.

The second “secret” involved the three dimensional nature of the artwork. Her father suggested that she incorporate the fan unit that sticks out from the concrete wall into her mural design. The strong fan vents fumes out of the shop. The cobbler shop requires good ventilation for the repair work done there, so the fan unit was essential to keep intact.  She made the fan unit into one of the buildings.

Nick said, “I think the main thing that inspired me was that my mom used to do a lot of water colors. There is one painting my mom still has of dolphins swimming in the ocean. I remember always looking at it and wanting to be able to articulate on paper something that people can easily understand.”

Her parents told her that she traced cereal boxes as a young kid. She graduated to sketch books, where she drew scenery and what was around her to pass the time. She didn’t grow up spending hours on her phone with Instagram and TikTok. She feels fortunate that her parents encouraged her to find creative ways to stay busy, including drawing, painting and learning mechanic skills.

I am a sucker for stories of people “finding their purpose.” Dan first visited Malawi in 2015. From the beginning, it felt like home to him. He said in a 2018 Locals Guide interview, “Suddenly all of my skills that I have been learning all of my life had a purpose.”

Here is a brief description of Dan and Alise (his second wife) Shulters’ humanitarian work in Malawi, one of the poorest countries in Africa – and the world. Building on his knowledge of shoe repair, Dan is helping people in the villages near his home there to set up micro-enterprises. During 2020, around 40 Malawian entrepreneurs began to operate their own tiny shoe retail businesses. In a recent Locals Guide interview, Dan and Alise said that “the shoe sales saved several families in their homes with food to eat when their jobs disappeared [due to COVID restrictions].” You can learn more about their work in Malawi at the non-profit group’s website

Shulters, Dan (interviewed by Shields Bialasik), “Dan Shulters is moving to Malawi. Where is that?,” Locals Guide, August 28, 2018.

Shulters, Nicole (Nick). Interview and other communications, April 27, 2021 and other dates.