Nourishing Our Community: Public Art in Stone on Lithia Way 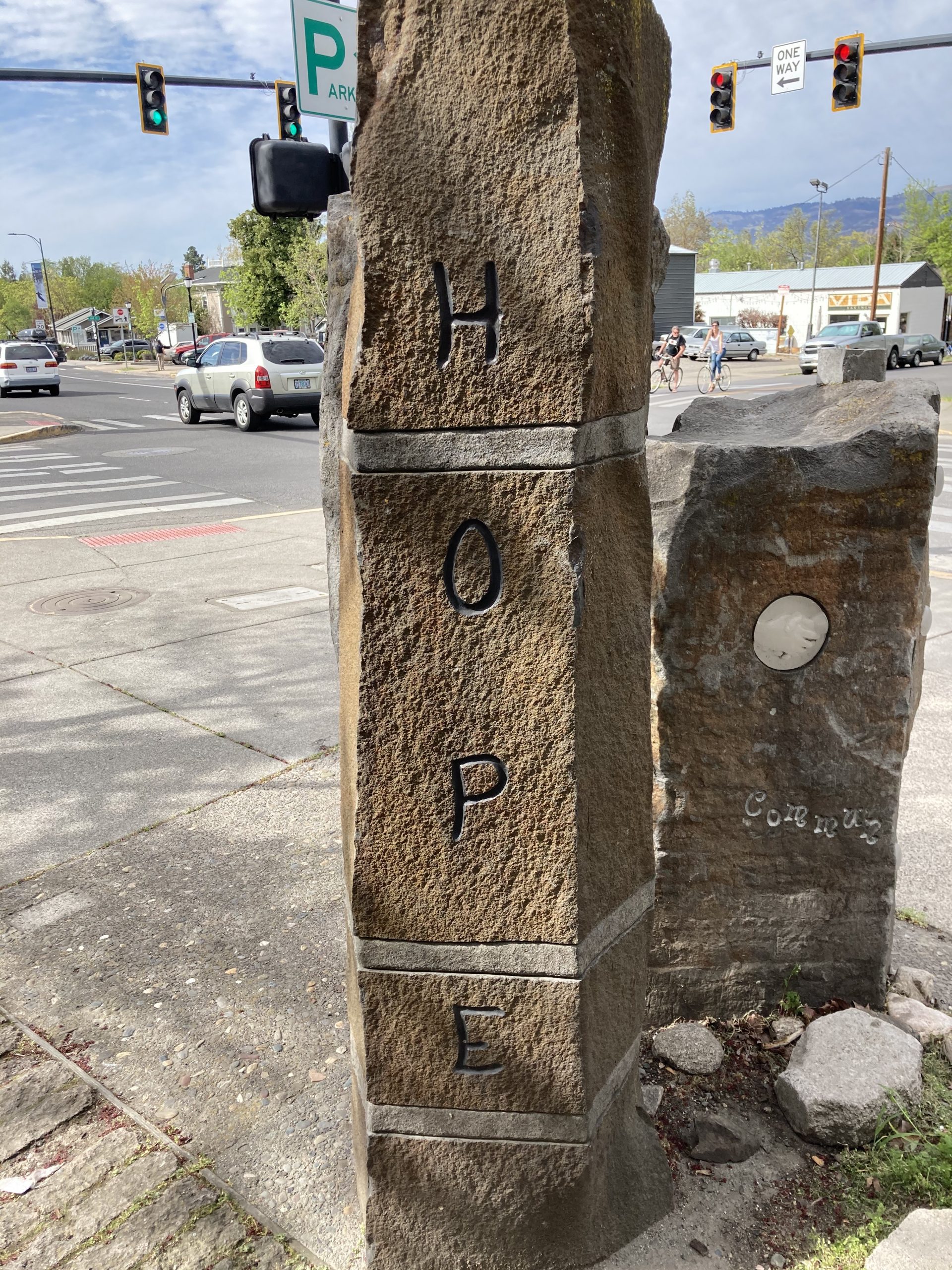 21 May Nourishing Our Community: Public Art in Stone on Lithia Way

“The basalt columns represent the strength of family and commitment to community. The embedded glass roundels include words of support…. This is about people; the people who make a difference in our lives.”

Rock from Northwest quarries, worked by Oregon artist Lonnie Feather, in memory of three Ashland community leaders of the 20th century. That is the artwork called “Nourishing Our Community.” It sits at one of the busiest intersections in Ashland, at the corner of Lithia Way and Pioneer Street.

Why Lonnie jumped at the chance to do this commission

Lonnie Feather told me why she wanted to make this artwork for Ashland. “Community has always been important to me,” she explained. “It’s the heart of where we live.” Community, to her, is what makes a place, a town or city, thrive and grow. It encompasses family, neighbors, neighborhood, city and even beyond.

She tried to capture the essence of community in the words and images that accompany the large stones of “Nourishing Our Community.”

She loves public art because it’s out in the open, where it can be enjoyed by so many people and contribute to building a sense of community.

In 2003, the McGee family contacted the Public Arts Commission (PAC) with good news. At his passing, Everett Henry McGee made a bequest in his will to fund a public art sculpture in Ashland. His wish was to honor members of the McGee and Neill families who had been especially active in Ashland community fraternal groups, business and politics through the 20th century. I want to introduce you to the three men he listed in his bequest.

Let’s begin with Everett’s father. James McGee, born in 1877, was one of many Midwesterners to move to Ashland. In 1905 he and Ashland native Olive Wing were married in Portland. I guess she enticed the couple to settle in Ashland. James had trained as an osteopath, but may have practiced for only a few years. He became active as a merchant in Ashland, primarily in dry goods. He was part of the Beebe, Kinney and Drake store (where Brickroom Restaurant is now) and later founded McGee Dry Goods and Ready to Wear on the ground floor of the Elks Building. He was also one of the first to build at Lake of the Woods.

Talk about active, James was active in the Chamber of Commerce, Lithians, Masons, Shriners, Elk’s Club and Kiwanis Club, plus he was an early Oregon Shakespeare Festival supporter! He also served on the Ashland School Board and Ashland City Council. James and Olive had three children, all boys.

Everett McGee was born to James and Olive in Ashland, July 27, 1909. He followed in his father’s footsteps, both in the grocery business and in Ashland community involvement. Everett’s first grocery experience was one summer operating the store at Lake of the Woods. Moving his business to Ashland, he purchased the East Side Grocery at the corner of Morse Avenue and Siskiyou Boulevard. In 1942, he built the larger Market Basket grocery across the street at Siskiyou Boulevard and Beach Street. In 1942, Everett also began a decade as minister of the Church of Christ in Phoenix, Oregon.

Richard (Dick) Neill is the other family member memorialized by this sculpture with a theme of community. Life brought them together when Everett married Dick’s sister Donzella in 1931.  Dick was co-owner with Everett of Market Basket and of Pioneer Village by the Old Ashland Armory, as well as sole owner of Plaza Grocery from 1957 to 1961.

Dick was a community leader in Ashland for many years. He was instrumental in getting the Ashland Community Hospital built. After four years on the City Council, he was elected Mayor in 1953 and served until 1968 – that is 16 years as Mayor! He found time to be a member of the Ashland Elks Lodge, Masons and Shriners, in addition to serving as a state-level director of both the League of Oregon Cities and the Independent Grocer’s Association of Oregon.

Highlights of the Public Arts Commission request for proposals

Here are two sentences I like a lot from the Ashland Public Art Commission’s request for proposals. “The McGee & Neill families have nourished and helped to sustain this community both literally – through their business – and figuratively through their lifelong service to the community. Therefore it is appropriate that we continue this tradition by nourishing the community with a beautiful piece of art that enhances a very visible area at the corner of two important streets in the downtown area.”

As I read about the grocery careers of father and son McGee and Dick Neill, my imagination took off and I envisioned the sculpture in a community garden. Then I read the Public Arts Commission minutes from October 2004 and learned that “Nourishing Our Community” was almost placed in front of the Ashland Food Coop store. That would have been appropriate for a memorial to community and grocery store owners! In the end, it was decided to place the sculpture on public property at its current location, which makes sense for an artwork owned by the City of Ashland.

Based on this illustration that Lonnie submitted to PAC in 2005, she was awarded the commission to create the Nourishing Our Community public artwork.

The challenge of working with stone

“To think about and create a public art piece involves so many parts of the brain.”

“It was an exciting commission for me,” Lonnie told me. “I had never worked in stone. I just loved the idea of the permanence of the stone pillars, carving into them and adding the glass elements. I wanted to make it interesting to walk around the artwork, for people to consider the meaning of words like ‘support’ and ‘community.'”

“All of it was a fun challenge for me. I got to put the hard hat on to work with the stone. I had to call the truck to bring the large stones over to my studio. Then in Ashland to be involved in digging the hole and the installation. That whole process was so fun for me: thinking out the logistics, how to do it, what’s safe, what fits the Ashland community, what’s the aesthetic I’m going after. To think about and create a public art piece involves so many parts of the brain.”

She came to Ashland a couple times to meet with the Public Arts Commission. She also had meetings with the public in Ashland, both to present her idea and to hear from Ashlanders.

Installation and dedication of the artwork

Lonnie hired a company to help install her stone sculpture. They sucked the dirt out of the hole where it is located. About one-third of the height of the stones is underground, so we see only the top two-thirds. The hole was filled with layers of gravel, concrete and dirt to stabilize the sculpture.

The meaning of Nourishing Our Community

“I wanted to represent the circle that builds thriving, compassionate community.”

In a deeper way, it’s about the connections we have with each other on multiple levels. “How do we support each other? How do we honor each other? How do we cherish what we have?” In her inner vision and in her art, she sees community reflected in circles. One small circle is the family unit. Most people care deeply about their family. Branching out, the circle gets bigger. Do people also care deeply about their neighborhood and city, and participate in helping them be good places to live? “Then it blows up to, how are we taking care of our planet?” Definitely the big picture!

You will notice that the glass insets are circles. Lonnie said, “Using hands, I tried to represent the human to human connection in those circles of glass.”

How an artist was created

“In my family, it was never called ‘art.’ It was just part of our lives.”

Before art can be created, the artist has to be created. When I asked Lonnie how she became an artist, she immediately gave credit to her family. She grew up with a father, grandmother and grandfather who all created objects of utility and beauty as part of their daily lives. Then she surprised me when she added, “In my family, it was never called ‘art.’ It was just part of our lives.” Her father enjoyed drawing and sculpture. His many woodworking projects were both practical and beautiful. For example, when the family needed a sofa, he designed and built one from the ground up – from initial sketches to final upholstery.

Her grandmother taught Lonnie about making candles and creating delicious food. When Lonnie was in high school, her grandfather took a class in stained glass. She told me, “I looked at him doing that and thought, ‘That would be fun.’ So he set up a table in his basement, and we got to make little stained glass ornaments together.”

In her 20s, she decided to make art more of her life. She opened up a little stained glass business: taught classes, sold supplies, did private commissions.

It wasn’t until she studied glass art for two summers at Pilchuck Glass School that she began to think of herself as a “professional artist.” This was a turning point in her life, when she decided glass would be her specialty going forward. In the decades since then, she got an art degree at Portland State University and she has continued “growing and making and thinking and exploring” in order to stay creative. She grows through traveling. She finds inspiration in nature, which she brings back into the studio and incorporates into her current artwork.

Lonnie lives and works in Portland, Oregon, where she was also born and raised. Her website ( https://www.lonniefeather.com/#/ ) describes her “variety of mediums and techniques which include painting on glass, glass sandcarving, cast glass, murals, mixed media with glass, wood carving and stone sculpture.”

Other artworks by Lonnie Feather

Here are several selections from her lifetime of artwork.

I am very impressed by the two large pieces (photos above and below) that were installed on the first floor and third floor of the RCC/SOU Higher Education Center in Medford in 2008. Lonnie told me: “The title, ‘It Begins Within the Circle’, reflects the idea again about the circle of community and life in the beautiful southern Oregon valley. I combined two techniques in glass – the colored areas are sandblasted and painted on plate glass and the clear is a relief with cast glass with a design reminiscent of swirling water as the beginning of that circle.”

The example below shows some of her current work. She combines her love of water color painting with cast stone. Part of her series Dreams of Water, this piece is called Roots of Life.

The corner of Lithia Way and Pioneer Street has pluses and minuses as a place for public art. On the plus side, its location between the large Lithia Way parking lot and Oregon Shakespeare Festival (as well as East Main Street) means that thousands of people see the sculpture every day. On the minus side, this spot is far from meditative! It is not a spot that draws you to linger for a while and appreciate the artwork. Too much concrete and asphalt.

Nevertheless, I encourage you to slow down the next time you walk by this corner. Walk slowly around the powerful stones that are likely to be here for many human lifetimes. As you read the word “HOPE,” try to feel the hope that Lonnie Feather put into this art. Reflect on the words carved into stone to encourage thriving, compassionate community.

Anon. Minutes of the Public Arts Commission, City of Ashland website, October 15, 2004 and other dates.

Feather, Lonnie. Interview and other communications, April 15, 2021 and other dates. Thanks to Lonnie for sharing her photos with me.