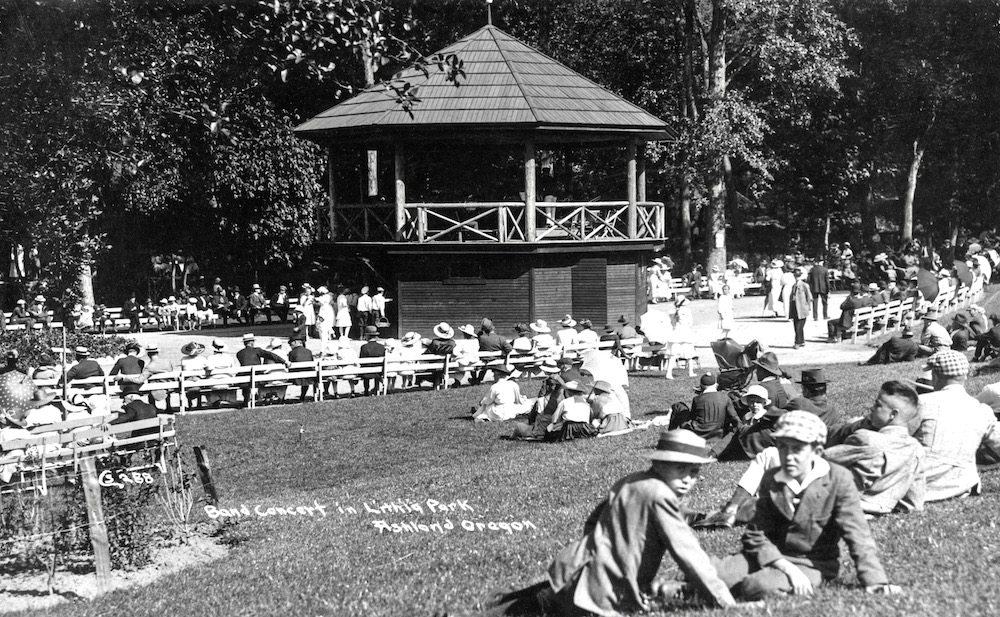 145 years of City Band history.
Why the band has ‘so much fun.’
One rehearsal is all they get!

It all began in the year…

How many names has the Ashland City Band had since 1876? What makes our City Band unique? All this and more in this article, part 2 of 4. It is based primarily on a 2019 interview with three men (Don Bieghler, Ed Wight and the late Raoul Maddox) who between them have 164 years of experience with the Ashland City Band.

Founded as the Ashland Brass Band in 1876, our City Band has had four (and possibly six) names in the past 145 years. There is a photo on the Ashland City Band website taken between 1880 and 1895 labeled “Ashland Band.” After 1890, when Otis Helman (Ashland co-founder Abel Helman’s son) was named the conductor, this band was also known as the “Helman Red Suit Band.” The city band became the Ashland Concert Band in 1915. Then in the 1940s, the name was Ashland Municipal Band. Finally, in 1952 the band got its current name.

1916 and the dedication of Lithia Park

1916 was a big year for Ashland and for the City Band. Lithia Park was dedicated in July 1916 during the largest 4th of July celebration in our town’s history. Four local city bands played at the bandstand and other park locations during the three-day extravaganza. In addition to Ashland’s city band, bands from Medford, Grants Pass and Central Point played for three days in a row. According to an article in the Table Rock Sentinel, each band had about 20 members in 1916.

The Ashland City Band continued to play at the Lithia Park bandstand all summer, as shown by this article from the Ashland Tidings.

City support for the band

In 1938, voters of the city of Ashland approved a small tax to support their city band. I consider that a huge vote of confidence in the band by the people of Ashland. However, state Measures 47 and 50 in the 1990s overrode local funding of the band. The city band is still part of the Ashland Municipal Charter, but its annual financing now comes from the city General Fund.

The Municipal Charter states that “The City Band shall present not less than ten concerts, including the Fourth of July parade, during each summer season.” And they do (except when impacted by the COVID-19 pandemic in 2020 and 2021).

Wight and Bieghler did research and found only one other city band in the state of Oregon (Corvallis) that has a full slate of summer public concerts. Having our City Band funded by the city makes it even more unique. Most city bands throughout the United States have to depend on donations and fundraising to continue playing.

Size of the City Band

The brass band started out small in the late 1800s. After Lithia Park’s dedication in 1916, the band size was limited by the size of the park bandstand. It could accommodate a maximum of 25 to 27 musicians.

During Dave Wight’s time as conductor, the number of players was usually in the 40s. Maddox conducted from 1977 to 1997 and increased the band size to between 75 and 80 musicians.

In 1947, Maddox’s first year with the band as a 14-year-old, the band still played at the 1916-era raised bandstand in Lithia Park. The only way up was through a trap door in the middle of the bandstand floor. Once the time came for the band to play, it was closed, and no one else could get in.

The City of Ashland funded construction of the current band shell in 1949.

From the 1930s through the 1960s, the audience would occasionally join the band in a “community sing-along.” We have lost that aspect of community singing in our nation’s culture over the decades since then.

Vocal soloists were also a much more prominent part of the band concerts many years ago. Ray Tumbleson, music professor at Southern Oregon College from 1963 to 1983, provided many vocal solo performances with the band. He was just one of many popular local singers who would perform with the band.

Ed Wight said, “When I was in high school, seven of my high school classmates were in the band. This was when it was 45 to 55 musicians. I looked around three or four years ago, now that the band is 75-strong. You would think there is even more room for high school kids. Well, there were only two, and they were both state champions on their instruments! The band under Raoul Maddox didn’t just get bigger, it got better.” The photo below shows the late Raoul Maddox in 2015.

In recent years, the City Band has been able to draw musicians who play in other bands during the fall, winter and spring. One was the Rogue Valley Wind Ensemble, which first performed in 1968 and later grew into the Rogue Valley Symphonic Band. Another was the Hillah Temple Shrine Band, founded in 1909, which evolved in around 1991 into the larger Southern Oregon Concert Band. Both of these bands indirectly improved the City Band in another way. Unlike before 1988, most players now show up for the City Band season each June in top performance condition, having just played concerts with the other bands.

One other factor also improved the quality of the band’s performance. In the mid-1950s, the band had five different conductors in five years. That changed in 1958. Since that year, there have been only four conductors, and each enjoyed many years at the helm: Herb Cecil (1958-1967), Dave Wight (1968-1976), Raoul Maddox (1977-1997) and Don Bieghler (1998-present). That individual longevity provides the stability and consistency of leadership necessary to maintain and improve overall performance standards.

“We’re all having so much fun that nobody’s leaving the band. Over half the band is more than 60 years old now.”

One reason the band has so much fun is because current conductor Don Bieghler is willing to be creative. For example, at the July 29, 2021 concert, the audience and band members heard alphorns being played. What a fun sight and sound!

Why is the City Band different from other bands?

A major reason: the band has only one two-hour rehearsal for each show. The musicians walk into each Wednesday evening rehearsal and open a folder of pieces that they will play at the Thursday evening concert. That’s ten pieces to learn in two hours! How is that possible?

Here is a brief exchange during my interview to give you a little appreciation for the level of musicianship in the Ashland City Band.

Me: “The whole band concert takes 45 minutes to an hour, doesn’t it?”

Me: “So how can you fit a whole rehearsal into two hours…”

Me: “…playing the whole pieces, plus going over the challenging parts?”

Don: “I know that a piece of music is going to take four minutes to play, so I can allow eight minutes for it in rehearsal. A one-hour concert becomes two hours in rehearsal. So that’s the kind of guide I use.”

Ed: “It’s a challenge for the players. Not all good musicians are also good sight readers. You have to be a good sight reader – able to play a piece well the first time you see it – to play in the Ashland City Band.”

There is no “luxury” to practice a piece for a few weeks, or even days, and then be ready for the concert. Current band conductor Don Bieghler explained that it starts with his selection of the music. “It has to be music at a level that we can read it. I have to select music that the audience will enjoy, so they want to come back. And I have to select music that the band enjoys playing.”

He gets suggestions for pieces from band members, but he makes the final selections. Bieghler also keeps detailed records, so that a popular piece is not played more than once every three years (except for marches).

Bieghler told me that he usually chooses only one very challenging piece each season, which would take two or three weeks of rehearsal for that piece. Then he explained something that surprised me again, and took my respect for the band up another level. “Now if we have something that’s more challenging, and takes more time in rehearsal, then the piece before that and the piece after, we could probably sight read it at the concert. So, if needed, I choose something that’s simple enough to sight read while playing at the concert.”

For about 20 years, radio station KSOR (JPR) would broadcast Thursday evening summer City Band concerts. “For several years,” said Maddox, “we would raise money for the station by having a guest conductor, and people would bid money to have their uncle come in and conduct one number with the band. The band would know the number by heart, so they didn’t have to watch the conductor at all.”

Why do band members and audience members come back each summer, year after year, decade after decade, to Ashland City Band concerts in Lithia Park? I’ll let long-time band member Ed Wright have the last word in this part 2 of 4 article.

“It’s so much fun to play in an ensemble this good, and to get an incredible variety of music, and each concert is different. If you’re a musician who loves band music, to play with musicians this accomplished is nothing short of a thrill. Top to bottom, it’s one of the very best bands in the state, because we get the symphony wind players, the music teachers who want to play during the summer, and the SOU faculty members, all these people who are too busy to play in the community bands during fall, winter and spring.

“Just one example: The French Horn section of the Ashland City Band is led [in 2019] by Cindy Hutton, Jennifer Cartensen and Linda Harris, and those are the top three horn players in the Rogue Valley Symphony. Additionally, the first chairs throughout the entire City Band brass section all play in the symphony. There’s such a high level of personnel sprinkled throughout the band, it increases the pleasure in performing good band repertory to hear all parts played so well.”

There are still more City Band stories to tell. I will share more humorous and meaningful band stories in Parts 3 and 4 of this series about the Ashland City Band.

Author in-person interview with Raoul Maddox, Don Bieghler and Ed Wight, July 7, 2019. Thanks to Ed Wight and Don Bieghler for reviewing the article and adding more of their memories in the process.