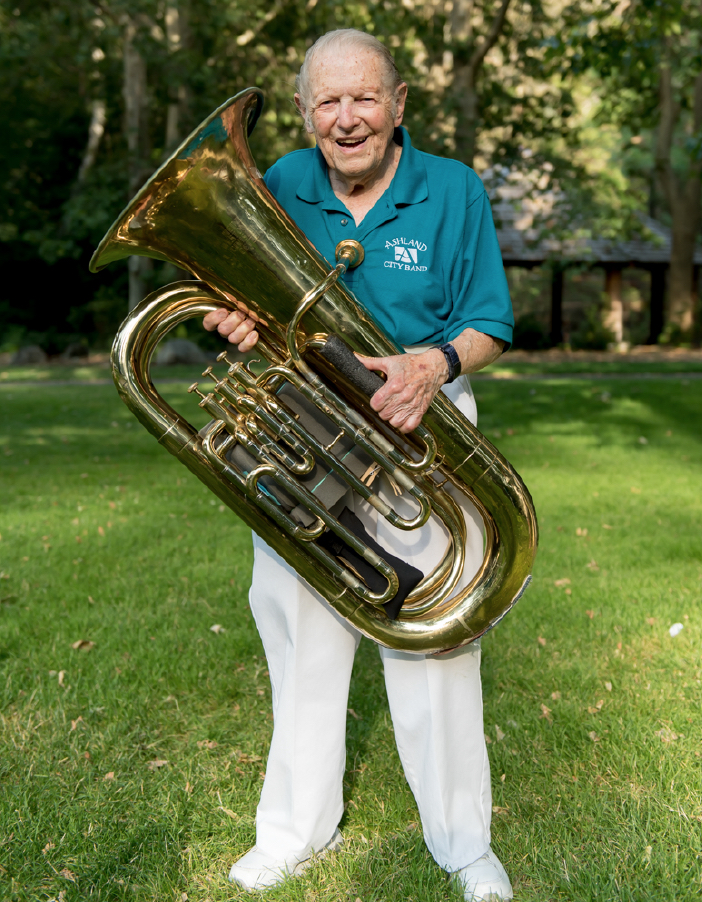 Three times through the 4th of July parade!
Typewriter as an instrument!
100-year-old City Band member.

This series of articles is based on an interview with three men who between them have 164 years of experience with the Ashland City Band, along with other research.

Who has been in Ashland’s 4th of July parade three different times in one parade? Only Raoul Maddox of the Ashland City Band. Here’s how it happened.

First time through: The City Band has always marched at the front of the parade, right after the motorcycle police and color guard that lead the parade. Several band members have also been in the Firehouse 5 band that played the parade route on the back of a pickup truck or an old fire truck.

Second time through: When Maddox was in the Firehouse 5 band, he kept his car on Water Street at the end of the parade route, then drove as fast as he could through the residential streets back to the parade starting point for his second time through.

Now, third time through: For three years, in the late 1960s or early 1970s, there was also an Ashland High Alumni Band that marched in the parade. These were former high school band members who came together just for fun. Well, and also for the incentive of a keg of beer from Cook’s Tavern downtown after the parade, so they could “tip a glass or two with their old friends.” During these years, Maddox somehow had to make it back to the parade start one more time to march with the Alumni Band.

4th of July parade story – backwards through the parade

Ed told me his father Dave Wight (City Band Conductor from 1968-1976) would sometimes get a police escort back to the parade starting point, so he could make it for his second time through the parade with the Firehouse 5. In those days the Firehouse 5 would meet before the parade in an office downtown where one of them worked. To get in the proper spirit of the parade, they consumed plenty of local ‘spirits’ beforehand. One year when Dave played, they drove the fire truck backwards in the parade – possibly the result of a rather conspicuous consumption of local beverages that day.

Typewriter as an instrument!

2008 witnessed the centennial of American composer Leroy Anderson’s birth. In honor of the centennial, Don Bieghler conducted a different Anderson piece during every concert that year. One Anderson composition was a short novelty piece for typewriter and band, written in 1950. Percussionist Yvonne Rowe was selected to perform the solo on her trusty Remington typewriter.

When it came time for the piece, Yvonne surprised the band and truly made it fun. First her husband brought out an authentic early 20th-century typewriter stand. Then Yvonne came out dressed for the part with a big grey wig, cake makeup, and long-skirted secretarial attire from 60 years earlier. It delighted everyone, and after a great performance the band gave her a standing ‘O.’ I wish I had a video of Yvonne and the Ashland City Band performing this piece. The best I could do was find a version for you on YouTube. Here is a link to the one I liked best.

James DePreist was the conductor of the Portland Symphony and the Britt Festival Orchestra. Raoul invited him to conduct encores several times at the Ashland City Band. One encore piece was a University of Michigan football fight song, and DePreist asked Maddox, “What’s a wolverine?”

Ed Wight tells a story of two “surprise” guest conductors. The City Band closes every concert with a couple marches. For one concert in 1979, Raoul Maddox spotted two former City Band conductors in the audience. On the spot, he invited both Irv Myrick and Dave Wight to conduct the marches that night. Even the guest conductors were surprised.

Martin Majkut is the conductor of the Rogue Valley Symphony. Many people don’t know that his first conducting experience in the Rogue Valley was not with the symphony, but was conducting the Ashland City Band. Majkut moved here in the summer of 2010, but the symphony season didn’t start until the fall. That summer he conducted the City Band in an arrangement of a Czechoslovakian tone poem.

In the summer of 2019, in honor of his 10th year in the Rogue Valley, I got to see Majkut guest-conduct a second time with the Ashland City Band.

Virginia and the trap door

This is a story from the 1940s about Virginia Westerfield, a long time clarinet player in the band. To get into the old bandstand, you had to enter through a trap door. You had to climb up narrow steps, then the door in the bandstand floor was swung back to let musicians in. Before the concert could begin, the trap door had to be closed for all the musicians to fit on the stage. Apparently, Virginia was late in arriving one day and found the trap door shut tight against her. We don’t know if the conductor intentionally closed the trap door to keep her out, or if he didn’t realize she was coming up the stairs. But after that, she was never late again during all her years with the band!

According to Bieghler, “Preston Mitchell, who played tuba in the band starting in 1989, was 100 years old in September 2017. We surprised him by playing ‘Happy Birthday’ at a park concert. Preston retired at the end of the 2017 season.”

Bieghler went on to say he gets frequent requests to play ‘Happy Birthday’ during a concert. To avoid awkward moments turning people down, the band came up with an ingenious solution. They only play ‘Happy Birthday’ “for those who are 100 years old.” So far, the only one to meet this threshold besides Preston Mitchell was an audience member – Sadie Williams – in 2016.

There are still more City Band stories to tell. I will share more humorous and meaningful band stories in Part 4 of this series about the Ashland City Band.

Author in-person interview with Don Bieghler, Ed Wight and the late Raoul Maddox on July 7, 2019. Thanks to Ed Wight and Don Bieghler for proofing the article and adding more of their memories in the process.