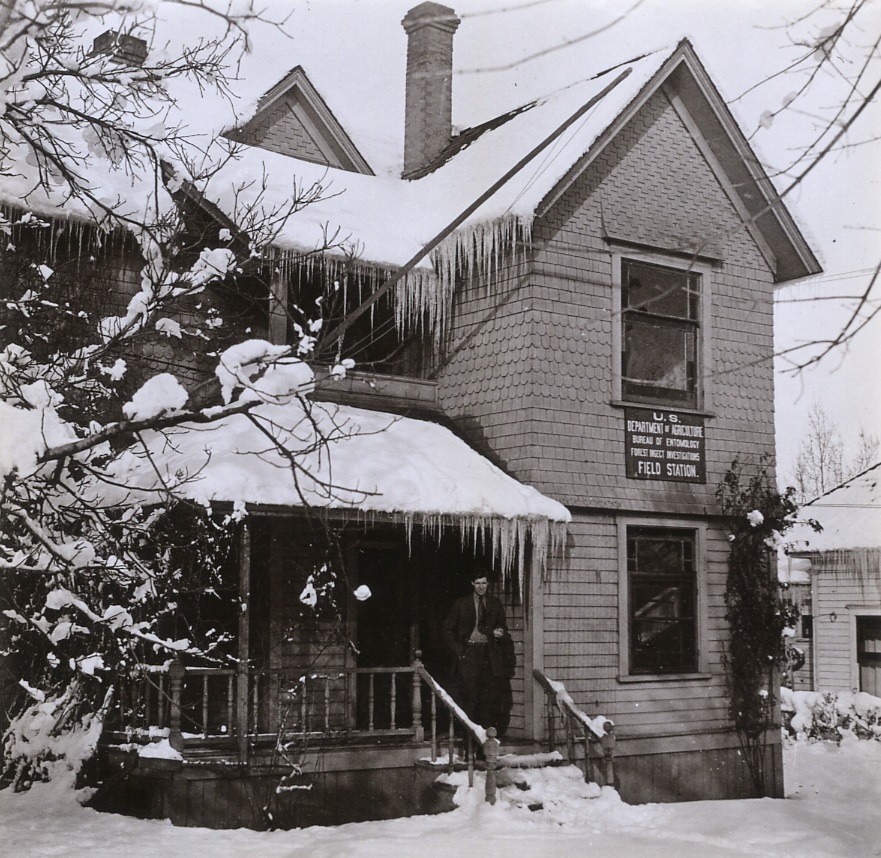 In Part 1, I briefly described the impact of the railroad on Ashland, then started our Third Street Walk at A Street. Part 1 got as far as 253 Third Street, and described the extensive renovation done at that house. In Part 2, we will walk the rest of the street, which ends at East Main Street.

Recap: Third Street was created in 1884

Before 1883, the city of Ashland was a small, primarily agricultural town. By 1883, the railroad being built south from Portland was getting closer and closer to Ashland. Excitement in the community was rising. Early pioneer Lindsay Applegate sold 156 acres of his land to the Oregon & California Railroad in October 1883. The company (later purchased by Southern Pacific Railroad) laid out streets and property lines in what became known as the Railroad District. Third Street was part of the first Railroad Addition in 1884, which included only First Street to Fourth Street. The Railroad District’s second half (Fifth Street to Eighth Street) was added to the town in 1888. All these new building plots significantly increased the size of Ashland.

248 Third Street, built in 1909, is one of the vernacular (simpler) Queen Anne architectural style houses. The National Register says that it “retains very high integrity in exterior detailing.”

Specifically, the house “is notable for its fine two-story front porch and balcony with a central front-facing gable that creates a well-articulated facade elevation.” It is simple, yet pleasing to the eye, from any view.

Along with 257 and 253, 247 Third Street is another example of one of the few remaining 25-foot-wide, narrow-but-long lots from when the Railroad District Addition was originally laid out in 1884. It was built in 1900, a rental house for the Beswick family as were the next two houses on this side of the street. As you can see from the photo, it still has its original decorative shingled gable and hipped roof front porch.

This sign in the park row made me laugh.

Let’s take a short break from looking at historic houses. These two photos show two approaches to landscaping the wide park rows on Third Street, between B Street and C Street.

Queen Anne in her glory

156 Third Street, built in 1900 for Henry and Nellie Boiven, shows many elements of the Queen Anne architectural style. Notice the decorated gable, the fancy front porch details and especially the corner turret. The turret is an added Queen Anne feature you don’t find in the simpler, vernacular Queen Anne style houses on Third Street.

The Boiven’s son Harry was born here in 1904. Two years later, the family moved to Klamath Falls. When I looked up the parents on the internet, I learned that their son Harry was an influential Oregon politician. Representing Klamath County, he served in the Oregon House of Representative from 1935 to 1942, then in the Oregon State Senate from 1955 to 1972. He helped get funding in 1964 for the Oregon Institute of Technology campus in Klamath Falls.

155 Third Street is “a fine example of a single-story wood frame bungalow,” according to the National Register. It was built in 1912 for Roy and Pocahontas Hosley. With a name like Pocahontas, I had to see what I could learn about the couple.

Born in Wisconsin in 1883, Roy was a brakeman for Southern Pacific Railroad after he moved to Ashland. Pocahontas was born in Oregon (probably Ashland) in 1880. She was the granddaughter of a pioneer who arrived with a huge 1853 wagon train. A newspaper clipping posted at FindaGrave.com described a very large wagon train that arrived in the Rogue Valley in 1853. “That train, composed of 43 wagons, 300 souls, 1,000 cattle and 200 horses, was in charge of Major Lupton (afterward killed by the Indians). The families of Giles Wells [and others] … were in this train.” Giles Wells was Pocahontas’ grandfather.

You may be wondering, as I was, why her parents named her Pocahontas. I haven’t been able to find out. She would not have had the only unusual name in town. Ashland co-founders Abel and Martha Helman named one of their sons Abraham Lincoln Helman, another Ulysses S. Grant Helman and a third Otis Orange Helman.

I found a photo of Pocahontas (Wells) Hosley at age 18 with three of her older sisters.

To me, the most notable feature of the house at 155 Third Street is the front entry steps. They are not original, but they sure are delightful. Here are several photos, but they are best viewed in person.

The house at 143 Third Street has a family connection with the one next door. Built in 1902, the National Register says that “Erastus I. and Ellen Wells purchased the dwelling in 1905 and, while Erastus apparently died shortly thereafter, Ellen would remain in the home until 1920.” Actually, it would have been difficult for Erastus to buy the house, because he died in 1891, according to his gravestone at Hargadine Cemetery!

Who were Erastus and Ellen Wells? They were Pocahontas’ parents! It appears as though Roy and Pocahontas built their house at 155 Third Street in 1912 so they could live next door to Pocahontas’ widowed mother. Her mother Ellen may have moved in with Pocahontas and Roy toward the end of her life, because her 1920 death certificate lists her address as 155 Third Street.

138 Third Street is another vernacular Queen Anne style house build in 1900. The most notable resident was Roy Hartley, who ran a music school — first here and then at his rental house next door at 130 Third Street. Did any of your family members take music lessons from Roy between the early 1940s and the mid 1960s? His school was called “The Studio,” later “identified as the ‘Ashland Branch of the Sherwood School of Music’ in city directories,” according to the National Register.

The cottage-style house at 125 Third Street was built in 1912, originally as a rental house for F.M. Blevins. It retains its historic character.

114 Third Street is for my readers who are fans of architecture. It is a rare example in Ashland of the Norman Farmhouse architectural style, albeit a simplified version. Fancy Norman Farmhouse homes usually had a round tower or turret. Built in 1930, it still retains its historic character.

111 Third Street, built in 1896, had many incarnations through the past 125 years. It is known as the Colonel William Silsby house, for its most famous resident. Colonel Silsby served in the 10th Iowa Infantry regiment during the Civil War. The regiment was formed in September 1861 and was mustered out in August 1865. That is four years of fighting!

At the end of the war, Silsby authored the history of the 10th Iowa Infantry. Civil War battles in which Silsby fought included Iuka, Corinth, Vicksburg and Chattanooga.

My great-great-grandfather’s connection with Silsby

Here is a personal aside. I mention a few of Silsby’s Civil War battles because my great-great-grandfather George Hovey fought in those same battles! Hovey was a farmer in Iowa in 1861. He joined the 17th Iowa Infantry regiment November 1961 and was mustered out in May 1865. Sadly, he was taken prisoner by the Confederate army in October 1864. He survived the notorious Andersonville prison for three months, where thousands of Union soldier prisoners died of disease and near-starvation. After the war, my great-great-grandfather went back to being a farmer, had children (leading eventually to me) and in the 1890s moved with his family to Pacific Grove, California.

I tried unsuccessfully to learn much about Silsby’s life outside of the Civil War. According to the National Register, “Retired, Colonel William Silsby moved to Ashland from Pennsylvania and invested in fruit orchards.” He bought this just-built, Queen Anne style two-story house on Third Street in November 1896.

Through the years, the house has been a private residence, was then divided into four apartments, became professional office space, then a bed and breakfast, and is now once again a private home. It was even a U.S. Department of Agriculture, Bureau of Entomology Field Station (see photo below).

94 Third Street dates to 1912. Quoting the National Register: “One of the best examples of the Craftsman Bungalow style within the Railroad District, this fine one story wood-frame dwelling demonstrates typical features of the style including the cobblestone or “River Rock” details of the front porch, the projecting pergola-like porch extension, low-pitched gable roof and multi-light “cottage” type windows.”

Third Street is filled with vernacular Queen Anne style houses, and 78 Third Street is another one. This one was built in 1899 for Lucinda Ganiard as a rental house.

You might recognize the Ganiard name. Lucinda and her husband Oscar built the three-story Ganiard Opera House in 1889 at East Main Street and Pioneer Street. A fire in 1912 destroyed the top two stories. You can still see the first story of their Opera House when you go to Three Penny Mercantile at that corner.

After her husband’s death in 1895, Lucinda continued to be one of the largest property owners in Ashland.

The matching houses at 74 and 70 Third Street were both built in 1899 for Julia Evans. Other than constructing these two houses, the builder Edward Perham was known primarily in Southern Oregon as a builder and repairer of bridges.

The Abbinito Salon at 50 Third Street is located in an 1899 vernacular Queen Anne house. With its very visible location, it has been occupied by businesses since the 1980s.

Now Third Street crosses Lithia Way, continuing only one short block before it ends at East Main Street. Small houses give way to two large, historic commercial buildings on this block. Both were built in 1911, in matching American Renaissance architectural style.

The rear building is 37 Third Street. The front building has an East Main Street address, so I won’t write about it in detail here. In 1911, when these two buildings went in, they were at the far end of downtown Ashland. Among the initial business tenants were an implement store and a theater.

In 1925, Western Auto Supply was in a storefront facing East Main Street, and the rear building was being remodeled to accommodate a 30-car garage. According to the Ashland Tidings of February 3, 1925, ” A 50 by 75 foot garage is … being constructed at the rear of the of [Charles Weimer] building on Third Street where The Ashland Granite Company had been located. An inclined drive leading to the back part of the first floor is being [built] on Third Street.”

Remember this description of an inclined drive, or ramp, in the rear building. It will come up again in my concluding story.

Looking up, I especially like the windows of the 1911 Annex at 37 Third Street.

Looking down, I am amazed by Mother Nature’s artistic tree roots in their square “picture frames.” To me, the twisted roots look like something out of a surrealist painting.

Truth is stranger than fiction

I hope you will enjoy my choice to conclude this photo essay about Third Street with a “truth is stranger than fiction” story, told to me by John Fields.

Before they moved to their current location on First Street in 1993, the Ashland Food Coop was located for many years at 37 Third Street. John Fields’ construction company remodeled their space on Third Street in the late 1980s.

A 1925 renovation of the 1911 building had set it up for use as a 30-car garage. A spiral ramp had been added in 1925 to drive cars up to the second floor inside the building. Fields’ company had to tear out this sturdy ramp during their 1980s renovation. They worked on it in the evenings after the store closed, constantly moving store supplies around.

John said, “We would close the store at 5:00 and start pouring new cement. I’ll never forget, we were working on the middle section. Safety tape was everywhere and it was total chaos. This guy walks in, he grabs a shopping cart, and he starts pushing it through the concrete. He was, like, ankle deep in the concrete we just poured. He looks up at me and he goes: ‘The floor is mellltttiiing.'”

Sorry, the comment form is closed at this time.