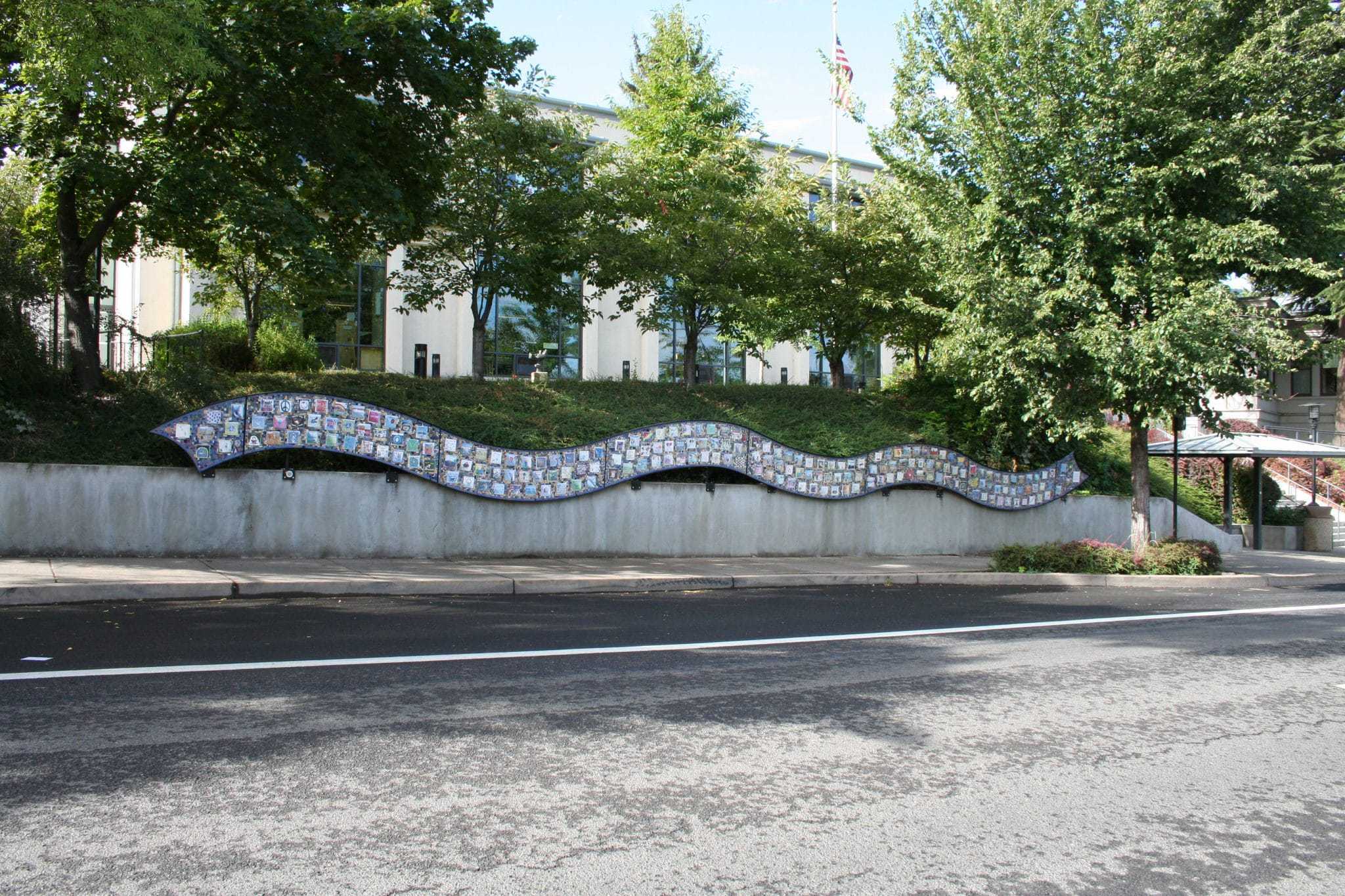 Peace Wall: at Ashland Library since 2010.

“I think the biggest thing for me was that the whole town was involved, from the mayor to the person who made a $2 donation.”

In Part 1, I told you about Jean Bakewell’s vision of colorful banners that would spread a message of peace covering the railroad property fence near A Street. [Here is the link to Part 1] In 2007, an enthusiastic core group, aided by hundreds of community members of all ages, brought the “Peace Fence” from vision to reality. Then in June 2008, all 120 or so of the banners on the fence at the time were sliced and cut down by vandals.

Part 2 will take you through the process of the temporary “Peace Fence” becoming the permanent “Peace Wall.”

“Usually there is a pretty direct line from the owner of the artwork to the artist. This is a really different story. I think this is a story of community and purpose.”

After the vandalism, Jean Bakewell and her partner Kay Cutter stopped by Sue Springer’s Illahe Studios and Gallery on Fourth Street. Sue was very active as a ceramic tile mosaic artist locally. In 2005, she had created Rio Amistad, a large public mosaic artwork. She knew tile and knew how to navigate Ashland’s complicated approval process for public art.

According to Jean, “Fortunately there was a photo of every panel that had been put on the fence. We went in and said to Sue that we were thinking maybe the city would let us do a Peace Wall [of the Peace Fence photos painted onto ceramic tiles]. She laughed, saying ‘oh, yeah, like that’s going to happen.’ So we told her we’d settle for a bench or something.”

Also an artist, Kay had experience working with ceramic tile. She experimented with transferring some of the Peace Fence banner photos on to tiles. She was frustrated because relatively quickly the tile colors were getting washed out by the sun.

One problem – the process was expensive. Jean and Sue figured they would worry about money only after getting approval to put up an artwork of this type. After money began coming in, Kay took on the huge project of computer work to prepare all 200 or so photos of the banners to be sent to Enduring Images.

Two prerequisites for approval: a location and a design

Jean and her core group’s original idea was to mount the Peace Wall mosaic on one of the large walls of Ashland City Hall. They got support for the project in principle from the Public Arts Commission on November 21, 2008.

The next hurdle was a presentation to the city Historic Commission on February 4, 2009. Jean Bakewell, mosaic tile artist Sue Springer and contractor Darrell Boldt spoke before the Historic Commission. They presented their design idea for a public artwork of peace banners in tile form to be mounted at eye level on the plaza side wall of City Hall. According to the minutes of the meeting, “The Historic Commissioners unanimously supported the tile display but the majority did not feel bolting them to City Hall was appropriate or represented good stewardship of the historically significant building. Several alternative locations were discussed such as in the plaza or on the side of another, less significant building façade.” The Historic Commission responded this way because City Hall is such an iconic structure in Ashland, dating back to 1891.

Jean, Darrell and others looked all over town for possible locations. Remember that this is a large piece of art – about four feet high and 55 feet long. It couldn’t go just anywhere. Ann Seltzer, who was the city’s staff liaison to the Public Arts Commission from 2002 to 2018, suggested the retaining wall in front of Ashland library as a possible location. Head librarian Amy Blossom supported the plan, and everything started to come together.

On March 3, 2009, the City Council approved the Peace Wall at its proposed location along the sidewalk in front of Ashland Library. Now the real work could begin. Fundraising and building the artwork happened simultaneously during the next year and a half.

“I went back to the studio to design a wave, the idea being emotion and peace and community, all these things together. I didn’t just want a flat, rectangular banner.””

Sue’s love for working with clay began in 1971. Her passion grew into a Master of Fine Arts degree at University of Oregon and a small business that through the years became a larger business.

From 1979 to 1992, her home and studio were in the tiny town of Illahe, Oregon. Illahe is located within the Rogue River-Siskiyou National Forest about 43 miles up the Rogue River from Gold Beach. The name Illahe “derives from the Chinook Jargon word ilahekh or iliʼi, meaning “land”, “earth” or “country.” After moving to Ashland, Sue established Illahe Tileworks, which became Illahe Studios and Gallery here for about 25 years.

Sue took on the task of supervising and coordinating the creation of Peace Wall at her studio. I will show you some photos of that process in a moment. Her “wave” design made the artwork much more eye-catching than a normal rectangular shape would have been. The wave design was also more challenging to build. Fortunately, a contractor and builders stepped up and joined the Peace Wall team.

“Without Darrell, the Peace Wall probably wouldn’t have happened.”

Jean told me, “When we decided to proceed, Darrell Boldt and I would go downtown and look for walls to put Peace Wall tiles on. We thought about the wall at City Hall, where everyone could see them. The Historic Commission didn’t like the idea of that. Darrell and I continued to look, but it was Ann Seltzer who came up with the idea of using the wall in front of the library.” Experienced contractor Darrell Boldt volunteered countless hours to assist with the design, construction and installation of the Peace Wall structure that holds its ceramic tiles. He enlisted Marty Jacobson and Bruce Smith of Ashland Fabrication to build the curving steel support structure.

Darrell was very modest when I spoke with him. He explained that he and Jean had been friends for a long time. His daughter Katrina (of local business Katrina’s Cards) had painted a banner for the Peace Fence. According to Darrell, one day he met Jean at a coffee shop. She was beginning work on the Peace Wall and said to him, “Darrell, I need a contractor for this project.” He replied, “I think you just found one.” Both his hard work as a volunteer and his reputation from decades as a contractor helped bring the Peace Wall to life.

“Our most successful fundraisers have been the monthly First Friday Soup Nights. These evenings were the brainchild of local restaurateur Tom Beam, who obtained the permits and provided and served delicious soup. Tom has footed the bill for these events, from which we’ve raised thousands of dollars.” [Note: as of April 2022, Tom and Lisa Beam own restaurants Pie + Vine and Skout],

All of the funds were raised from the community. The city did not contribute to this public artwork’s cost. Marta Gomez kept track of the money and Peace House provided a huge service by channeling the donations through their non-profit organization.

As described in the above quote, much of the money was raised by “Soup Nights” organized by local restaurant owner Tom Beam. He got approval to set up a booth in the Plaza, where hot soup was sold for $5 (or more) a bowl. It was also served for free to those who had no money to donate. Some people really stepped up and donated $100 to buy a tile for the Peace Wall. The Carpenter Foundation donated $1,000 and there were large supporters who preferred to remain anonymous. It all added up to about $27,000 contributed by the community.

Making the mosaic was a community project that involved several hundred people. Sue offered her studio space for the large mosaic panels to be worked on. She explained: “I designed the panels so we could make the mosaic by laying the tiles on to backerboard in the studio. That was all done with volunteer help. People signed up to come into my studio in shifts.”

She and the core group decided where to place the 6″ square banner tiles on the backerboard.

As you can see, there was quite a bit of space between many of the tiles. The volunteers had free rein to fill in these spaces with small ceramic tiles – and other objects – of their choice. Sue added, with a bit of wonder in her voice, “People came and gifted us pieces of broken pottery and momentos from their families, bits of jewelry and small objects that meant a lot to them.”

As you can see from the photos, people of all ages were involved in the mosaic process.

As mentioned above, the steel structure that holds all the mosaic panels was built at Ashland Fabrication by Bruce Smith and Marty Jacobson. This steel structure was bolted to the wall first.

As the mosaic sections were completed by enthusiastic volunteers, they were moved one by one out of Sue’s studio for installation on the steel structure.

The late Native American story teller Thomas Doty, with Roy Phillips, designed a tile called “A Good Journey Toward Peace and Healing.” Here is how he described it on his website: “The images are traditional native rock writing symbols. In the upper left are two arrowheads pointing toward each other symbolizing conflict or war. Five moccasin prints (indicating both a good journey and passage of time) lead toward two arrowheads pointing away from each other meaning no conflict or peace. The background is a rock face at a Takelma vision quest site for medicine people located above the Rogue River. The names in red are native tribes from southern Oregon and northern California.”

In Morse’s 2011 movie, Doty said: “I used five moccasin prints in this because for the native people around here, five is the sacred number. This indicates not only a journey or passage of time, but a good journey. When you put all of the symbols together, it basically means that we’re having a good journey away from conflict and war toward peace and healing.”

In this context of journeying away from conflict toward peace, it is ironic that without vandalism of the temporary Peace Fence banners in 2008, the permanent Peace Wall public artwork would probably not have been created. It is a testament to the core group’s commitment to peace that they responded to the anger of the vandalism with renewed creativity rather than anger.

Here are two Peace Fence banners and how they now look as Peace Wall tiles.

Nancy Bardos, speaking at the Peace Wall dedication on September 21, 2010.

Nine years later, in 2019, additional money was raised to add lights to the Peace Wall. Now it can be viewed after dark.

I hope the next time you pass by the Peace Wall,

you will see it with fresh eyes.

Here is a 23 second video that shows some very happy people who worked long and hard to help make the Peace Wall a reality.

If you have not read Part 1 about the Peace Fence, you can read it here:

References for Parts 1 and 2:

Morse, Marsa. (32 minute movie) “A Community Committed: The Story of the Ashland Peace Wall,” 2011. [Jean Bakewell loaned it to me]

Springer, Sue. Interview and personal communications, November 2021 and other dates.