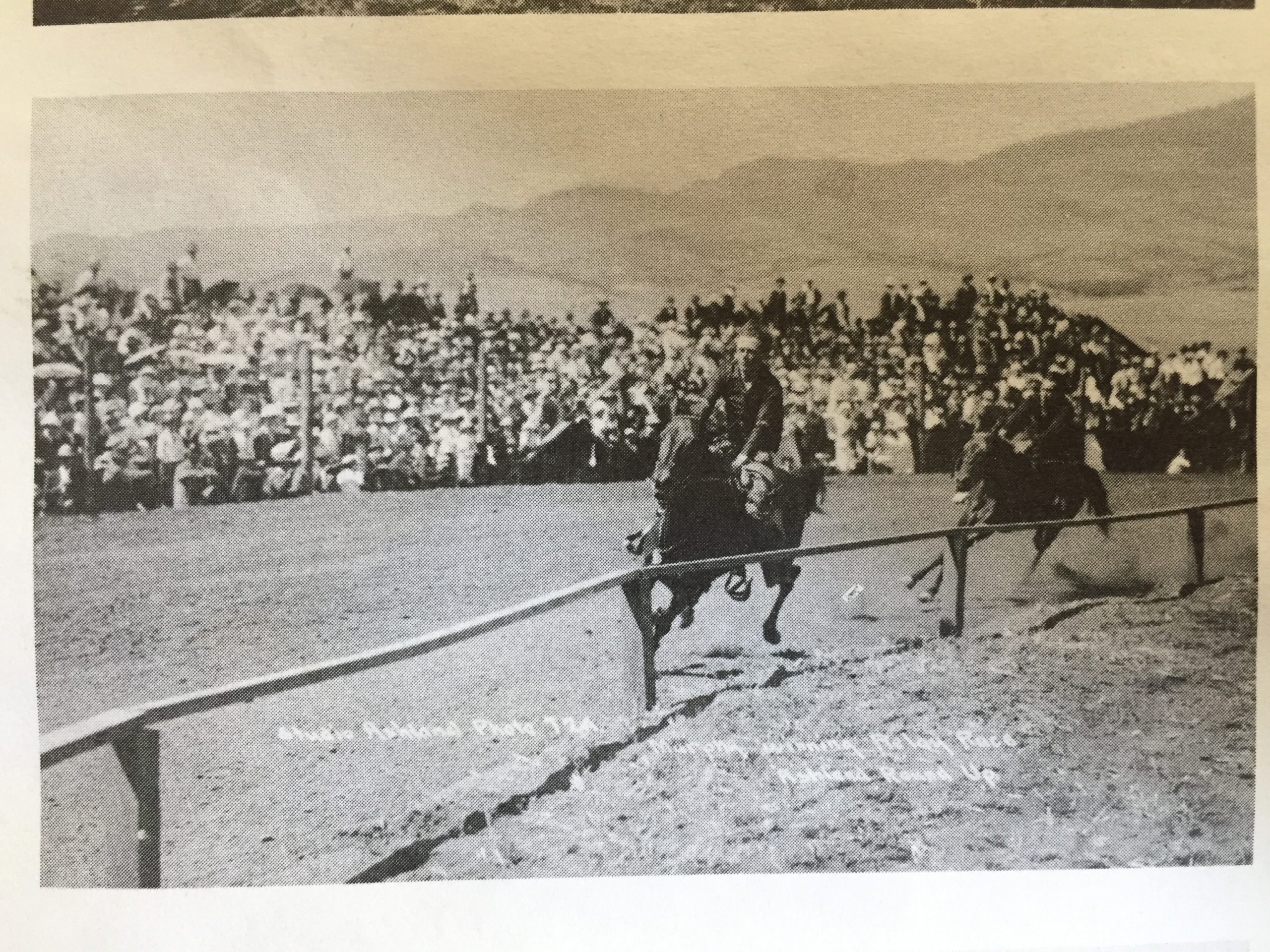 Here’s a Cowboy Murphy story that I heard from Lance Locke. First, some background. Locke’s father-in-law was Dr. Elmo Stevenson, President of Southern Oregon State College (now SOU) from 1946 to 1969. When Dr. Stevenson became the college President, only 133 students were enrolled. By 1951, he and his team had grown the student body to 800. At the time of his retirement in 1969, there were nearly 4,000 students. He made quite an impact on our community!

According to Locke, Stevenson wanted to be a rancher in addition to running the college. He bought the Walker house and land so he could raise cattle there. At the time, the house at 1521 East Main Street was abandoned and uninhabitable. Locke and his wife Vivian later did a complete renovation, so the house now looks much as it did when it was built in the late 1850s. You can read about Lance Locke’s house HERE.

Stevenson, on the other hand, didn’t care about the abandoned house – only the land. By the early 1970s, he had close to 100 head of cattle on the Walker property and another piece of land.

Suddenly responsible for 100 head of cattle!

Locke was too busy with teaching high school, coaching sports and family life to help his father-in-law much with the cattle. Then Dr. Stevenson died unexpectedly in January 1973. Suddenly, Lance and Vivian were responsible for 100 head of cattle! They had to learn fast. When Locke ran into problems on the cattle ranch, he turned to Ray Murphy, or “Cowboy” as he was called in Ashland. Cowboy was born in 1893 and raised on a cattle ranch just outside Ashland. He won the relay race in Ashland’s famous July 4 to 6, 1916 Rogue Roundup rodeo, which took place right on the Walker ranch where Stevenson and Locke’s cattle later grazed!

While Locke was learning the cattle ranching ropes in the early 1970s, Cowboy lived at the Columbia Hotel on Main Street. He spent his afternoons across the street at the Elks Lodge, where he had a seat of honor at the end of the bar. When Locke had questions, he would head over to the Elks Lodge, pick up Cowboy and take him to see the cattle. Cowboy guided Locke through tough times with tips from his lifetime of ranching experience.

Locke told me Cowboy was a font of pithy quotes, most of them not appropriate for articles children might read. Here’s one Locke was willing to share with me.

It was his first year in charge of the ranch and winter was coming on. Locke had a huge supply of rotten straw and not enough money to go out and buy fresh hay. He wondered if he could safely feed what he had to the cattle. So he picked up Cowboy at the Elks Lodge, showed him the rotten straw, and asked: “How do I know if it’s good feed or not?”

Cowboy had nearly 80 years of ranch experience to back up his off-color advice, so Locke bought buckets of molasses and poured it on the straw to make it more appealing. Sure enough, the cattle made it through the winter.

Long-time Ashland rancher John Archer added to the Cowboy Murphy Elks Lodge stories. He agreed with Locke that Cowboy had a big sense of humor. He loved to kid people. Here’s one example: He would go to the Elks Lodge on Sunday morning. When he got settled in, he would challenge the bartender to bet on the score of the Notre Dame football game. Now you know, and I know, and Cowboy knew, that college football games are played on Saturdays. But somehow, the Elks Lodge bartender at the time didn’t know that. The result – Cowboy would always win the bet!

“Cowboy never bought a beer at the Elks Lodge.”

Archer added another dimension to the Elks Lodge stories. He told me, “Cowboy never bought a beer at the Elks Lodge.” Not that he didn’t drink beer, he somehow always got someone to buy for him.

Here’s a brief family history for Cowboy Murphy. Cowboy’s grandfather John Murphy came to Oregon from Ireland, living for a time in both New York and Iowa. John Murphy got an Oregon donation land claim several miles from downtown Ashland, near the current site of the Ashland Airport, and went into ranching.

J.J. was the oldest son, born and raised on the Murphy ranch. By the time J.J. was 21, he pretty much ran the ranch, due to his father’s ill health. In 1884 J.J. married Gertrude Neil, whose family owned the land to the west of the Murphy ranch. Neil Creek is named after her family.

“J.J. and Gertrude had four sons and a daughter, Alice, who died in infancy. The sons were George Carl, born in 1885, John Murray, 1891, Ray Neil [Cowboy], 1893, and Clyde, 1907. J.J. continued to operate the ranch and deal in livestock until he and Gertrude moved into Ashland in 1914.” [Table Rock Sentinel, 1987] John Murray took over managing the family ranch. Cowboy had a more varied life experience.

From a young age, Cowboy was active in Southern Oregon rodeos. He helped organize the first Rogue Roundup Rodeo in 1916. This three-day rodeo was part of Ashland’s massive three-day 4th of July celebration that year. Rogue Roundup promoters brought in three train cars full of bucking horses and quarter horses, plus steers for roping, wrestling and riding. Ashland’s rodeo was inspired by Pendleton, Oregon’s very successful Pendleton Roundup, which had been founded in 1910. Pendleton sent horses and steers, as well as many cowboys, cowgirls and Native American riders. More horses and riders came over from Klamath County.

The 1916 and 1917 rodeos took place on the Walker property, where you can still see the large field across East Main Street from Science Works Museum.

Cowboy fought in World War I, surviving the fierce Argonne Forest battles. Upon returning to Ashland after the war, he married Emma Jenkins in Jacksonville Presbyterian Church. Their marriage ended in divorce after four years. Cowboy never remarried and never had children.

After World War I, a new rodeo site was developed in Ashland in the area of Highway 99 and Valley View Road. Rodeos were held here until about 1930. Cowboy participated in many of these, as well as local rodeos in Yreka, Klamath Falls and Jacksonville. He went further afield with relay race horses he had trained at the family ranch. According to the Table Rock Sentinel article, “He raced in relays at Cheyenne, Calgary and Pendleton.”

When I talked with retired local rancher John Archer, he showed me this photo of Cowboy with Johnny Longden, one of the most famous jockeys of all time. Cowboy’s horse “Rolling Star” won quite a few races, including this one with Longden riding on July 16, 1930.

Longden won a lot of races! He was born in England in 1907. His father went to Canada in 1909. “In 1912, he [Johnny] moved with his mother to Alberta, Canada, where his father already had emigrated as a coal miner. They almost did not make it. Because a train taking them from their home in Wakefield to Southhampton on the British coast was late, Longden and his mother missed their scheduled trip on the inaugural voyage of the Titanic.” [from ESPN article about Longdon]

Longden’s first win was in 1927, so the 1930 photo was very early in his career when he was still racing a lot in Canada. He went on to hold horse racing’s record of 6,032 victories, which has been surpassed to this day only by Bill Shoemaker and then Laffit Pincay Jr.

John Archer’s father-in-law bought a large ranch near Ashland. Fresh out of college, John Archer came to Ashland in 1964 to live and work on the ranch. Cowboy Murphy helped them with their cattle. Archer told me, “I saw him a lot for about 10 years.”

Cowboy Murphy’s horse was named Mary. According to Archer, Cowboy “talked about Mary all the time. He even made everybody believe it was his wife he was talking about.”

Murphy was good friends with Joe Jessel. I wrote about Joe’s mother Susie Jessel, [link to article here] who was a faith healer in Ashland from 1932 to 1966. People came from all over the country to be healed by her. Joe inherited some of his mother’s healing ability, and he helped ease Cowboy’s aches and pains for many years. Archer said that Joe would treat people from 2:00 or 3:00 pm until 8:00 or 9:00 at night. Then Joe and Cowboy would go out to bars, and Joe would treat. They didn’t only have a love for beer in common. They also both had a love for horses, which may have been the main reason they got along so well.

The Archer family had cattle near Ashland, and also up around Howard Prairie and Hyatt Lake. Back in the 1960s, there was much less traffic on Southern Oregon roads. They would drive their cattle along Highway 66 (the Green Springs Highway) to and from their mountain pastures. Cowboy often helped them with these cattle drives.

At times, a cattle drive would coincide with the playing of baseball’s World Series games. Cowboy would spur his horse ahead to find someone in a car that was slowed or stopped for the cattle going by. He would ask the driver of the car what was the score of the World Series game. Then he would mosey on back to where John Archer was riding with an eye on the cattle and casually ask Archer to bet on the score of the game. By this time, Archer was hip to Cowboy’s tricks – he refused to take the bait.

Sumner Parker owned a large ranch to the east of Ashland, part of which is now the Ashland airport. Cowboy Murphy worked for him, as well as for many other local ranchers through the years. Parker willed his horse bridle to Cowboy Murphy, who in turn willed it to John Archer. See the photos of Archer holding it.

The Ashland Airport (“Sumner Field”) is named after Parker, as described in this excerpt from the city website. “The history of aviation in Ashland is well established, dating back to the early 1920’s. Several airfields were utilized in the Ashland area during the early years of aviation. In the late 1940’s an airstrip developed by Sumner Parker, a local pilot, was leased to the City of Ashland for use as a public airport. The Sumner Parker site was located approximately 3 miles from Downtown Ashland and was found to be well suited for aircraft operations. The City continued to lease the property and make improvements to the airfield into the 1960’s. In 1963, based on growing community support, the City began to evaluate future development needs of the airport. After establishing an airport committee, a feasibility study was conducted to determine the best location for a local airport. The Sumner Field site was found to be the most feasible, and the City Council authorized negotiations for purchase of the property surrounding the airstrip. Federal approval of the site was received in 1964, and acquisition of the property was completed shortly thereafter.”

Ray continued riding until he was up in years. Around Ashland he became known as the “Old Cowboy.” Ray Neil Murphy died November 16, 1976, the last of J.J.’s children. He was buried in the Ashland Cemetery.