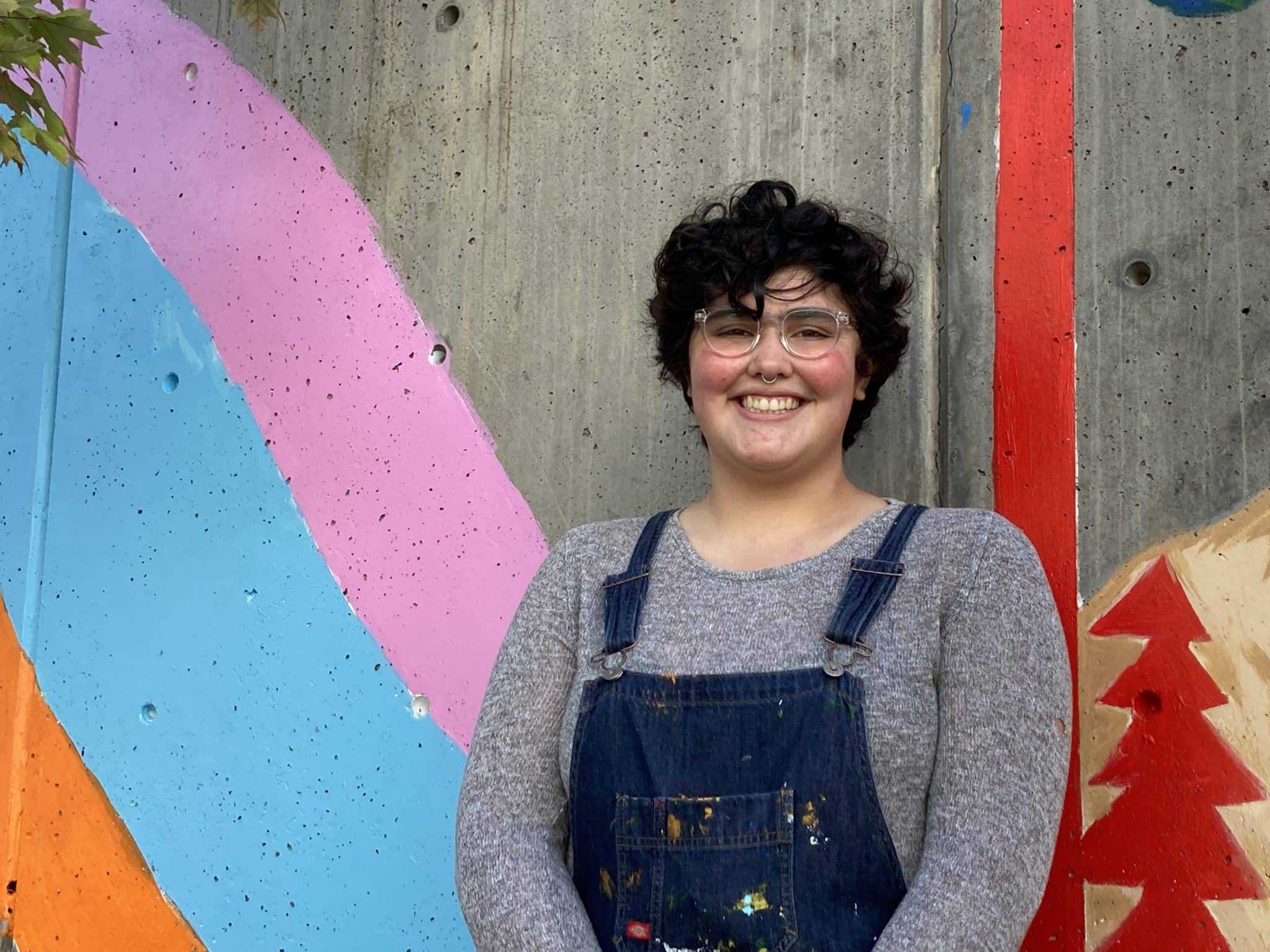 “I’d like to say thank you for trusting a teenager, a Latine teenager, to put this up on the wall. I am so honored.”

The BIPOC Celebration Mural is a bold statement, located on a wall of Ashland High School but meant for the entire Ashland community. This is Part 2 of three articles. I will tell you about the artist, describe the steps involved in painting this 171 foot long mural, and show highlights of the mural dedication held on November 23, 2021.

“This mural is a reminder, a gathering place, and a promise.”

In Part 1, I described how students in the recently formed Ashland High School Truth to Power club decided to create a mural honoring Aidan Ellison, a Black teenager who was killed in Ashland on November 23, 2020. They chose a theme for the mural, which was to portray a variety of BIPOC writers and activists with a connection to Southern Oregon.

“These are my painting overalls. All of the paint on them is just from this mural.”

The club wanted to choose an Artist of Color to paint the mural, and they found one in 2021 Ashland High graduate Isa Martinez Moore. Note that Isa uses the pronouns they/them. When I interview artists, I like to ask them about their earliest art memories. So I asked Isa, “When did you first consider yourself to be an artist?” They replied, “I’ve always considered myself an artist, since I was really, really, really little. My dad was an artist. Both my younger brothers were also artists. I vividly remember, all the way through kindergarten and elementary school, I was always creating art.”

Their art thrived at Ashland High, where Isa was a leader in the National Art Honor Society club. Isa added, “I think what really inspires me is the motivation to create, wanting to be better, to create more art that I can be proud of.” I said, “You sound like an athlete as you describe your motivation.”  Isa laughed and agreed, “I definitely think the love for a sport is very similar to the love of an artistic craft.”

Isa had a concrete wall to work with on the Mountain Avenue side of Ashland High School. From July 2008 to December 2009, Adroit Construction did a major seismic retrofit and renovation of the original 1953 gymnasium building. The 2010 photo below shows what the gym and new wall looked like after the renovation was completed.

That is a lot of space to work with. I was curious how much the artist was told up front and how much creative freedom there was in the design process. Here is Isa’s answer. “The people in the club told me they wanted it to be portraits of these people, and the rest of it I pretty much came up with by myself. I wanted the frames to be a good way to cleanly separate each person. I wanted to add little details that pertained to each of their lives inside the frames. Then I hit sort of a creative block. I didn’t know how to make this brighter and more fluid. That’s when I came up with the idea of the swoops and the swirls – something to tie them all together, while still recognizing they are each in their own frames.”

Here are the Swoops and Swirls

Painting began immediately after approval by the City Council. This photo shows Ashland High art teacher and mural consultant Max Malcomb talking with artist Isa Martinez Moore and members of the mural team, as they get ready to begin. Isa already had a complete mockup of the entire mural, but translating that to the concrete wall would be a two-and-one-half month process.

The wall was in basically good condition. The mural team began by cleaning visible dirt off the wall, then putting down a thick coat of white primer where the portraits and bright colors would be painted.

August and early September 2021 were difficult days for Ashland residents, and a difficult time for painting outside. First, the temperature topped 90 degrees most of August, with many days over 100 degrees. Second, the heat was accompanied by forest fire smoke filling the Rogue Valley. Isa and the mural team made slow but steady progress.

Rain finally came on September 18 – bringing good news and bad news. Good news: the rain drove the smoke away. Bad news: you can’t paint an outdoor concrete wall when it is wet!

The Truth to Power club hoped to involve local residents with a community painting day. Their vision for the mural was to have it be an educational and motivating presence to reduce racism locally – both within the high school and the greater Ashland community. Involving as many locals as possible in the mural creation would contribute to their vision.

Due to the heat, smoke and rain, the community painting day was scheduled on September 26, 2021. I can attest that it was a great event, because I was there. In addition to many high school student painters, community members both young and old showed up.

We were allowed to paint the swoops and swirls in between the portraits, not the portraits themselves. Those were reserved for Isa! As you can see, just adding solid blocks of color gave us plenty to do. My wife Kathy and I added color to the red and yellow bands at the north end of the mural.

Isa and the mural team made slow progress during the wet months of October and November. In these photos I took October 25, you can see great progress on the portraits – but three are not yet complete.

Isa was still adding the final touches to Lawson Inada’s and Aidan Ellison’s portraits on November 21, two days before the dedication! The mural was beautiful and powerful in its impact by the dedication day on November 23, 2021.

A dedication ceremony for the mural took place on the cool evening of November 23, 2021. Organized entirely by the Truth to Power club students, the ceremony included music, poetry, dance and speeches.

After the introductory music, Isadora Millay spoke about why the mural was created. “After Aidan’s murder on November 23, 2020, Truth to Power [club] developed an ever-ongoing project called ‘our promise to Aidan.’ This is our promise: ‘We vow to never forget you. We commit to ensuring that your death will catalyze a transformation in our town. We will use our voices and the opportunities afforded us to stand with People of Color in our community. We will fight to honor you and all the others who have fallen to the systemic racism ingrained in our valley. We will fight to be better.'” She continued, “The BIPOC Celebration Mural not only would celebrate and honor Aidan’s life, but also the lives of other BIPOC writers, activists and artists who have made their mark within Southern Oregon.”

“When it came time for choosing the subjects of the mural, we looked for those individuals whose work and activism have helped our community to grow in its inclusivity. compassion and equity.”

Mirandah Davis-Powell, Simone Starbird and Anya Moore briefly described each of the people portrayed in the mural. They concluded, “And finally, Aidan Ellison, a caring and generous friend and family member, and a former Ashland High School student. He loved music, had an infectious smile, and loved to make the people around him happy. His mother explains, ‘If you were the underdog, Aidan was your protector.’ Aidan was shot and killed on November 23, 2020. This mural is a tribute to his legacy.”

Artist Isa Martinez-Moore spoke of the process and gave many thanks. “The process of this mural has been educational, challenging at times, and so, so incredible for me. It has been months and months of planning, sketching, drawing, painting, and spending time pouring my soul into this wall. … Thank you to every single person who came to community painting day.”

Isa concluded, “I’d like to say a final thank you for trusting a teenager, a Latine teenager, to put this up on the wall. I am so honored.” Note that “Latine” is a gender-neutral term Isa uses, rather than Latino, Latina or Latinx.

During my interview with Isa, I asked if there was anything they would like to say to people who will read my article. They spoke with depth of feeling. “Since part of this mural is honoring Aidan Ellison, one of my main goals was to make that part of it really distinct in memoriam for him, and to make it known that this terrible tragedy shouldn’t have happened. While doing the other portraits, what I really wanted to convey is that even after People of Color are, unfortunately, killed, what we have to do as a community is highlight and honor those People of Color who are still alive and making contributions to our community. Although it is in memoriam of Aidan and Aggie, I still wanted to use a lot of bright colors and a lot of happy portrayals of these people. I want it to be clear that People of Color’s lives aren’t meant to be tragedies, that it’s important to highlight their beauty and contributions without making it always seem like just a sad story.”

Isa hopes that young People of Color and young Queer people can look at the mural and be inspired by leaders who have done so much to bring change locally and nationally. Bigger picture, Isa wants all Ashland High students to look up to the people in these portraits and find motivation to help make the world a better place.

In Part 3 of this series, I will introduce the life and passion of each person portrayed in the BIPOC Celebration Mural.

CLICK HERE to read Part 1 in the series about BIPOC Celebration Mural.

CLICK HERE to read Part 3 in the series about BIPOC Celebration Mural.

For a list of references for the three photo essays about the BIPOC Celebration Mural, see the end of Part 1.