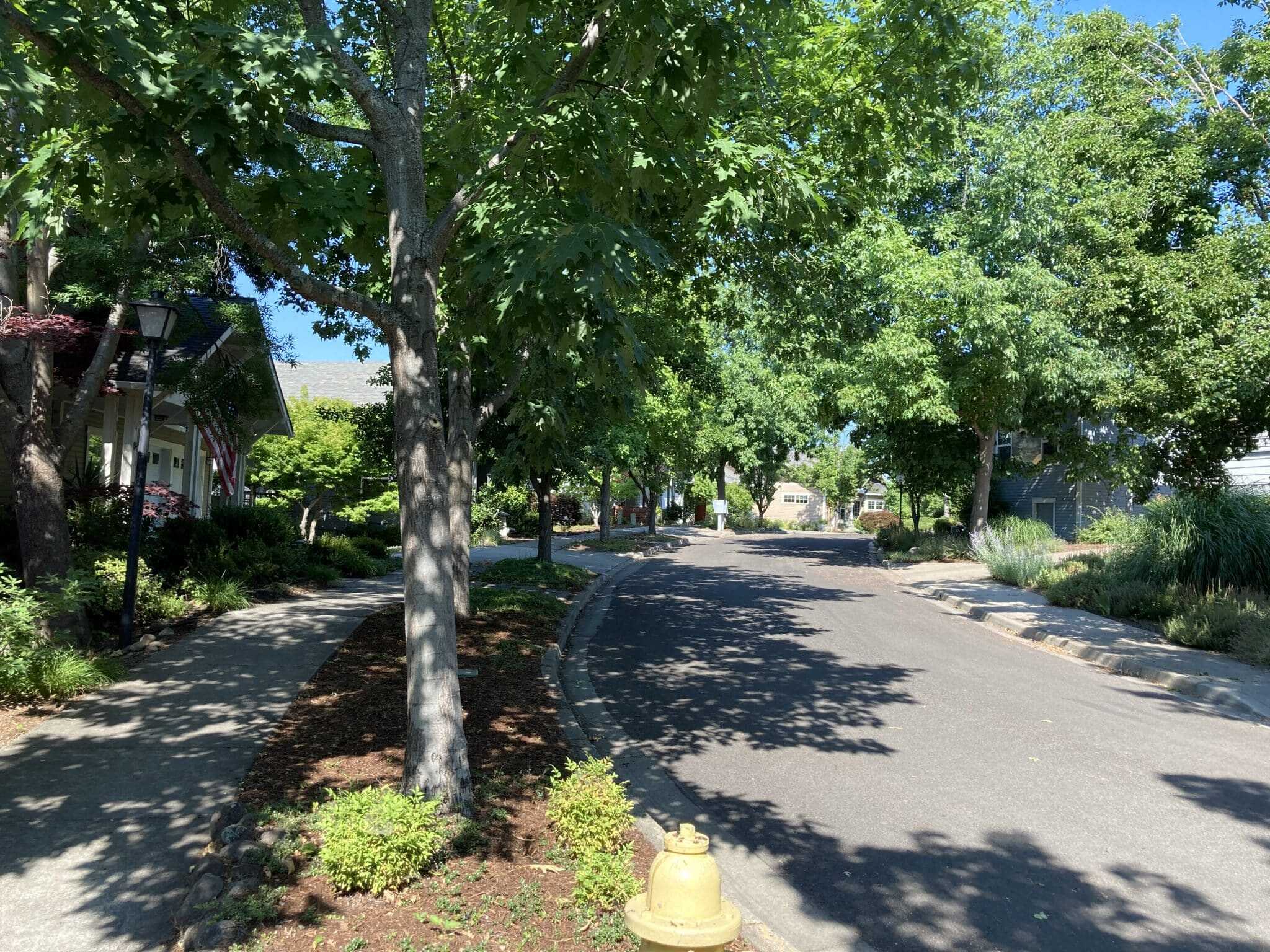 A fork brought me here!

Few houses. Many trees. Many stories.

A fork in the garden

It was a fork that brought me to Great Oaks Drive. Not “a fork in the road,” but “a fork in the garden.” Now that I have you thoroughly confused, here’s the beginning of the story.

In early August 2022, I sent a request to my WalkAshland email subscribers asking for suggestions for new neighborhood art around Ashland. Tamsin Taylor, who lives on Great Oaks Drive, responded: “My back yard at 594 Great Oaks Drive has been designated a pollinator garden. I also stuck a rather large green fork in the ground where the (sort of) paths diverge.” Needless to say, that intrigued me, so I decided to walk around the Great Oaks Drive neighborhood.

It turns out that the street itself is only one block long, with not many houses. My first thought – not much to write about. However, I have learned to approach each new street with an open mind. This short street provided me first with interesting photos. Taking the photos led to meeting people, which led to many interesting stories. Let’s go.

The first house that caught my eye had brilliant yellow Black-eyed Susan flowers set in front of the yellow and blue flag of Ukraine. I sent this photo to my WalkAshland email subscribers just days after I first took it.

I found out later that this garden, tended by Sherwood and Gerry Goozée, was chosen by the Ashland Garden Club as Garden of the Month for May 2022. The colorful rhododendrons and dogwood tree in the garden were no longer in bloom when I visited in August, but it was still lovely.

Ruth Sloan of the Garden Club wrote: “Sherwood has been gardening here for nine years, moving from a 42-acre ranch near Ukiah, California where he planted 100 trees. At 94 years old, Sherwood has slowed down a little but he still mows the lawn! Sherwood now has help from their friend Denise Moffatt who weeds and plants as directed by Sherwood. He says he still loves ‘playing in the dirt.'”

Ruth also pointed out that Sherwood is an artist. That stimulated me to want to meet him and Gerry, which I had a chance to do.

Sherwood has lived a long and varied life. I love his story about why he and Gerry moved to Ashland, so I’ll focus on that. First you need to know that Sherwood worked in professional theater during his 20s and 30s, including being a stage manager for touring Broadway shows. He was also involved in summer stock shows in the San Francisco Bay Area for many years after that, both on and off the stage.

During the early 2000s, Sherwood and Gerry drove by Ashland a number of times while visiting their daughters who lived in the Seattle area. Then in 2012, Gerry talked Sherwood into joining her at a theater-focused OLLI adult education program at Southern Oregon University. The week-long program was a collaboration between OLLI and the Oregon Shakespeare Festival (OSF). On the first night, the group attended the OSF comedy Animal Crackers, based on a Marx brothers film. For some reason, Sherwood walked into the Angus Bowmer Theater thinking that OSF was a small-town, amateur theater. By the time he walked out at the end of the show, his head was spinning with awe at the professionalism of the acting, scenic design, stage managing, the theater itself, and everything else involved with the production!

He was so impressed that the next day, as his wife attended a workshop on make-up for the theater, Sherwood was out finding a realtor and looking at possible houses to buy! By the end of 2012, the couple were living on Great Oaks Drive in Ashland.

I was pleased to visit them at their art-filled house. You can see many of Sherwood’s paintings for yourself at his website: https://goozeepaintings.weebly.com . Here are photos of two of them.

Now we get to the FORK

Tamsin Taylor, the lady with the fork, lives across the street from the Goozees. She made a commitment to create a pollinator-friendly garden, with help from Shooting Star Nursery and Ahimsa Gardens landscaping. Her garden wraps around the house from front to side to back. The front yard has lots of Ajuga, also known as Bugleweed.

The side yard is filled with flowers right now.

The fork around back is not as tall as I pictured it would be. For some reason, my imagination created an 8 or 10 foot tall steel sculpture dominating the garden. It is actually short, green and subtle. Still, it’s enough of a surprise to bring a big smile to my face each time I see it.

To the pedestrian path

Here’s the entrance to the pedestrian path that leads you from Great Oaks Drive to Kestrel Parkway and Bear Creek. As you walk to the side of the closed gate onto the path, you are walking by Tamsin’s Pollinator Garden.

She walked me through the gate to see to a rockier, drier part of the Pollinator Garden. How many of the flowers do you recognize? Ahimsa Gardens and Tamsin help educate us by placing name tags by many of the plants. The garden includes several species of Milkweed, the sole host plant for caterpillars of the Monarch butterfly. To our delight, as Tamsin showed me around her garden, we spotted several Monarch butterflies, along with lots of bees and smaller butterflies.

I was drawn further along the path by benches shaded by large oak trees, a lovely spot to sit down and enjoy the view all the way to the Siskiyou Mountains on a hot August day.

In the midst of the dead blackberries that had been cut back to the ground after the 2020 Almeda fire, I saw sprouts of green blackberry bushes emerging. Those blackberries are a fire hazard that is tough to get rid of. Past the few blackberries was a narrow ribbon of bright green crossing the meadow. I learned from a neighbor that this ribbon of green is called Kitchen Creek. It starts in the hills on the other side of the I-5 freeway, then flows through the Mountain Meadows Community on its way to Bear Creek.

Tamsin brought in Klamath-Siskiyou Native Seeds to help reestablish a native plants presence in 1/3 acre of land she owns on the north side of this path. Suzie Savoie planted native seeds in seven spots here, with hope that they will adapt and spread. Tamsin showed me where the seven spots are marked by small signs and these metal circles.

This story surprised me. Tamsin’s 1/3 acre was filled with blackberry bushes, as are so many open areas in and near Ashland. How to remove them?

Cut each blackberry bush down to the ground? Too many and too large.

Pull them out by the roots? Too many and too large.

Burn them to the ground with a weed burner? Scary.

Kill them with a strong herbicide? Not an option for Tamsin.

Mow the bushes to the ground? Works well for large areas, but Tamsin chose to ….

Hire a herd of GOATS!

A local company brought out 19 goats, plus a dog to protect the goats. A solar electric fence went up around the 1/3 acre to keep the goats in place. Once the goats went to work, all of the blackberry bushes were munched down to the ground in about five days! Sprouts came up again, of course, but Tamsin was able to either dig them up or cut them back to the ground while they were still small.

Back to Great Oaks Drive

This block of the Mountain Meadows Community dates to 1999 and 2000. The trees have grown enough to provide soothing summer shade for pedestrians as we stroll the one-block-long street.

8 bird feeders = how many birds?

Lee explained to me that the address for the house used to be 554 Great Oaks Drive, but for some reason the city changed it to 554 Mountain Meadows Drive when the Bowmans bought the house. Go figure! That’s my justification for including their stories in my Great Oaks Drive photo essay.

I first met Lee on August 6, 2022, as he was putting out his American flag and I was taking photos of his beautiful front yard. He pointed out many native plants, including these shallots that they got from Shooting Star Nursery.

During one conversation, I learned that the houses on Great Oaks Drive are part of Mountain Meadows Community. I had assumed that the retirement community of Mountain Meadows was all located on the east side of North Mountain Avenue, but I was wrong. Houses on four streets to the west side of North Mountain (including Great Oaks) are also part of the retirement community.

You can learn more about the North Mountain neighborhood by reading my photo essay about Kestrel Parkway.

Interviews with Sherwood and Gerry Goozée, Lee and Roberta Bowman, and Tamsin Taylor in August 2022.