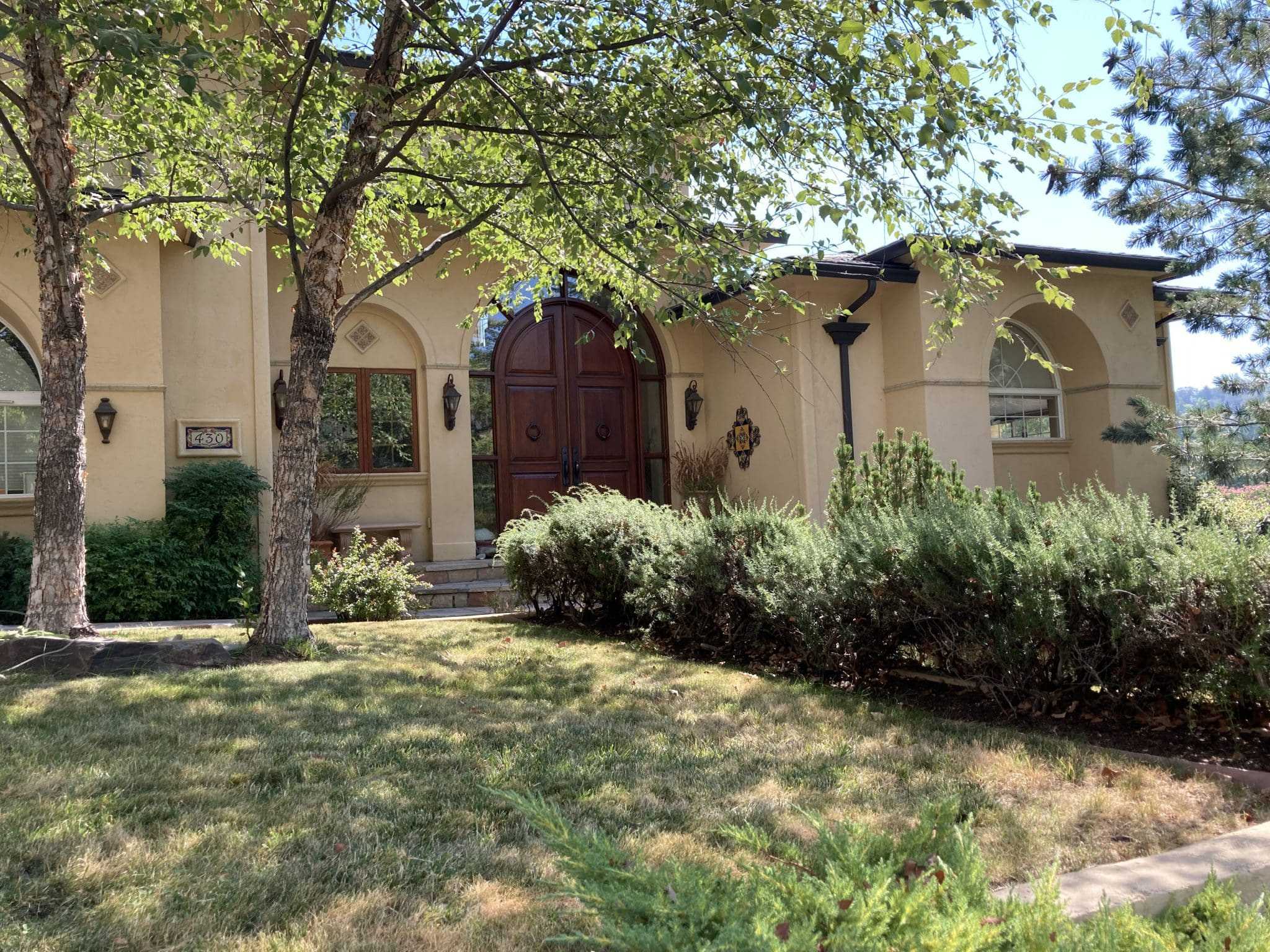 From Wimer Street to Tucker Street.
“A buck was stopped here” story.
Named after James Thornton?
Homes built 1966 to 2012.

If you drive up Wimer Street to the top (before Wimer, surprisingly, starts going downhill), you will reach the east end of Thornton Way. This is a relatively new part of Ashland. The first Thornton Way home was built in 1966 at number 520. Most of the rest were gradually built in the 30 years after 1966.

This photo essay will be mostly photos, though I will tell you stories of a ten-point buck and a James Thornton. I found architectural details that caught my eye, as well as lovely details in neighborhood gardens. I started my walk at the corner of Wimer Street and Thornton Way with an uphill climb heading west. Then the street levels off for a while, before curving steeply downhill until it meets Tucker Street at the other end.

This is one of the few open, buildable lots left on Thornton Way. It gives you an idea of the valley views from these homes.

I notice mailboxes on my walks

Because almost every mailbox in town is nearly identical, I enjoy finding and taking photos of the few that have individual character. Here are two on Thornton Way.

As I was walking the downhill curve of Thornton Way, this long, bright green, very healthy boxwood hedge caught my eye. I had to stop and admire it, then take photos from several angles.

“The buck stops here” is a cliché. This story is not about the cliché, but about a large buck that was stopped here on Thornton Way. Specifically, it’s about a male deer (AKA buck) shot with a rifle in a front yard on Thornton Way in the year 2019. It is about the bullet passing through the buck and lodging in the house! I’ll tell you now that no humans were injured. The buck, on the other hand ….

This photo from the Oregon State Police, Fish and Wildlife Division shows the dead ten-point buck. A male hunter was driving his pickup truck in Ashland on October 16, 2019. He apparently spotted the large buck, which was resting next to a house on Thornton Way. The hunter pulled his truck over to the curb and shot the buck from inside his vehicle. Then he dragged the buck out of the yard, leaving a trail of blood, and loaded it into his truck. A neighbor heard the shot, came out, and got the license plate of the truck as it was driving off.

Oregon State Police tracked down the hunter and recovered the deer. Their press release stated: “Further investigation found where the bullet exited the buck deer and penetrated the house above the front door.” What was he thinking, firing a rifle shot at an animal right in front of a house? That was a close call!

The hunter was sentenced to two-year bench probation, five-year suspension of his hunting, fishing and trapping licenses, 80 hours of community service, and forfeiture of his weapon and hunting gear. The State Police added, “The meat was salvaged and donated to a local charity.”

Was the street named after James Thornton?

When I looked up the name Thornton in several Ashland history sources, I came across an early pioneer named James Thornton. According to the July 15, 1882 edition of a Jacksonville newspaper called the Oregon Sentinel, James Thornton was “born in Tippecanoe County, Indiana May 29, 1827; emigrated to Iowa in 1835, crossed the plains in 1850 and arrived in the Rogue River Valley in 1851.” That was even before Ashland was founded by Hargadine, Helman and a few of their friends in January of 1852.

If this account is true, he was one of the first pioneers to settle in the Rogue Valley. You might know where his original farm was located when I tell you that he sold the farm to Joseph Rapp in 1868 or 1869. (Think Rapp Road in Talent.)

This excerpt from Thornton’s diary dated April 24, 1867 introduces his big connection to Ashland: “Wednesday 24th fine growing weather to day Peach trees out in fool [full] bloom I and Godard went to Ashland in the afternoon I went the first meeting of the Stock holders of the Woolen factory we elected Hargadine Mr Hauley J.M. McCall J.P. Walker B.F. Myre for trustees for the company for one year, I got 220 lbs of flower Fene was here to day Henry brout [brought] her down.”

A major new business, the Ashland Woolen Mill, was created in 1868 by a group of business men. You might recognize the last names Hargadine, McCall and Walker from Thornton’s diary entry. Thornton became the sole owner of the Ashland Woolen Mill in either 1872 or 1878. The mill was located along Ashland Creek between Water Street and Helman Street, near Central Avenue (which was called Factory Street in the late 1800s) between 1868 and 1900. Here is a photo of the Woolen Mill site today, in 2020. The buildings in the background are the Plaza Inn and Suites on the left, and a condominium complex in the back of the photo. Ashland Creek and Water Street are to the right, out of sight. Helman Street is to the left, out of sight. The sculpture in the foreground, by the late Marion Young, is called The Journey. You can read my photo essay about The Journey here.

Allen Cain described the Woolen Mill in his 2003 history article: “By the 1880s, the Ashland Woolen Mills, as it came to be known, was producing blankets, cashmeres, shawls, flannels, underwear, socks, and yarn for domestic and international markets. At the height of production, the mill used 16,000 pounds of wool per month, about 80 percent of the wool produced in Jackson County.

During the nineteenth century, Ashland Woolen Mills was one of the largest employers in Ashland, just a small village when the mill was first built in 1868.” It was a bad blow for the town of Ashland when the mill burned down in 1900.

I am speculating that Thornton Way was named after James Thornton, since a number of Ashland streets are named after early residents of the town. Here are the street signs at the two ends of Thornton Way.