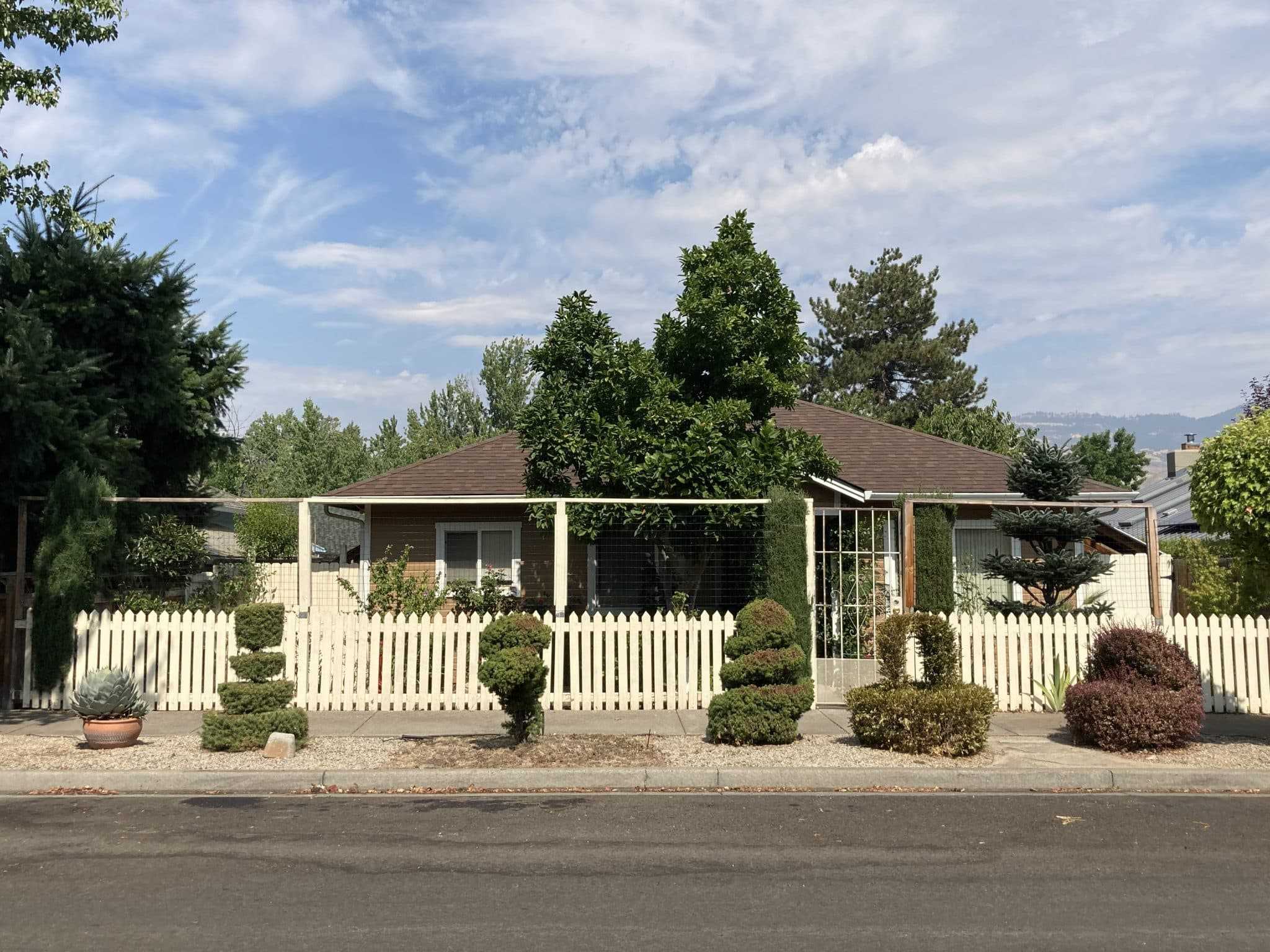 I walked Patterson Street and Poplar Place in by myself in September 2022, and again with my friend Andy Anderson in late October 2022. Andy and his wife Annette live on Patterson Street. Magic was in the air, for during our walk we had multiple serendipitous meetings.

Before I show you photos of Patterson Street houses and yards, I would like to introduce you to Lili the dog (whom I met) and Lunar the cat (whom I didn’t meet, because Lunar now lives on the Oregon coast). When Andy and his wife Annette would take Lili on neighborhood walks a few years ago, Lili and Lunar hit it off. For some reason, they became best friends. Lunar was described to me as a cat who looks like “a white tiger with blue eyes.” Check out this photo of them playing together and see if you agree.

Andy described Kerry, the woman who used to own Lunar, as “the rock lady.” Sure enough, when we got to her house, I saw interesting rocks by the front fence and began taking photos.

At that moment, she came out of her front door and engaged us in conversation. First, she enthusiastically showed us a variety of colorful, intriguing rocks she has found during her mountain trail walks in the vicinity of Ashland. Then she pulled out her phone and showed us unique local rock formations. Then I pulled out my phone and showed her a photo I took of the sun shining through a “keyhole rock” on Mt. Ashland. Here are two photos I showed Kerry..

We “escaped” from Kerry’s rock enthusiasm after having seen fewer than one-tenth of one percent of her serious rock collection. I am kidding about “escaped,” of course. If you have read many of my photo essays, then you know I love to take photos of rock walls, rock art and unusual rocks that catch my eye. See one more of my rock photos below.

This neighborhood is not “historic” Ashland, nor is it “brand new” Ashland. For example, the houses on Patterson Street were built between the 1930s and the 2000s.

From Kerry’s house, Andy walked me to the west end of Patterson Street, a cul de sac with the name Poplar Place. I took photos here of autumn color and a Poplar Place pocket park (say that fast three times).

The pocket park common space borders Mook Creek, a seasonal stream. Andy and I met and chatted with Jef, who was on his knees at the edge of the creek replacing invasive weeds with native plants. I wrote about Jef as the “stream protector” in my photo essay about Crispin Street. This pocket park has a small play area for children and a picnic table where neighbors can gather.

Where does this path lead? Learn more about it. Read my photo essay about Crispin Street.

Here are two photos of a Golden rain tree and a close-up photo of a Tamarind tree on Patterson Street. I think these two trees are unusual in Ashland.

Andy told me, with a bit of pride in his voice, “This spot on Patterson Street has the town’s best view of Pompadour Bluff.” Others may disagree, but the street trees here do provide a beautiful frame for the geologic formation.