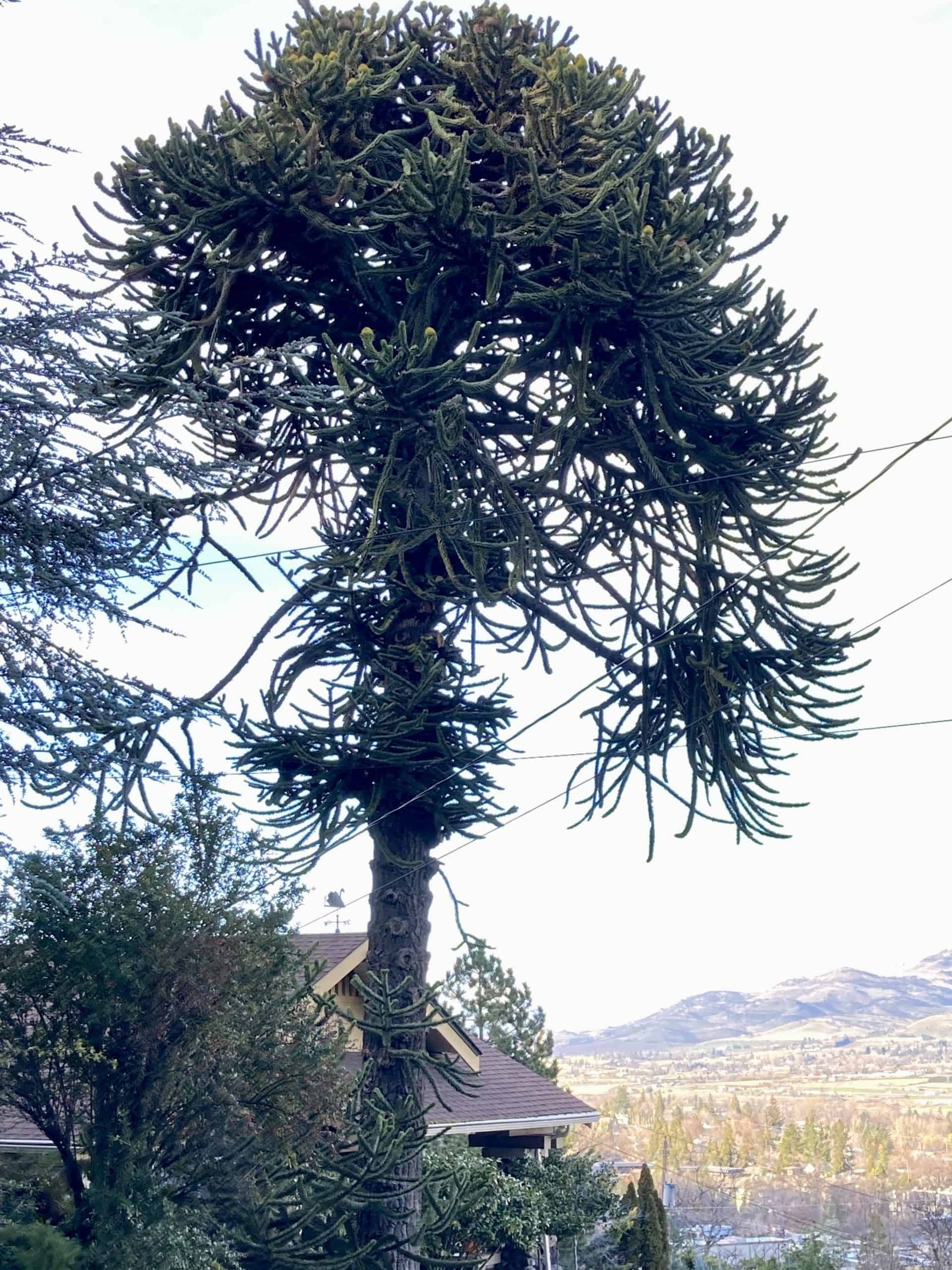 Posted at 17:46h in Ashland History, Tree of the Year by Peter Finkle 12 Comments

“Climbing this tree is like climbing a porcupine.”
Located at 1 Hillcrest Street.
Why is it called Monkey Puzzle tree?
Historic house, prehistoric tree!

The historic 1913 Boslough-Claycomb House at 1 Hillcrest Street is the site of our 1990 Tree of the Year, now 110 years old as of 2023. It is called Monkey Puzzle tree or Araucaria araucana (the botanical name).

The house was built in 1913 as both private residence and medical office for Ashland physician A.W. Boslough. He chose a prime spot on a bluff at the intersection of Hillcrest Street, Vista Street and Glenview Drive. Though just three blocks from downtown Ashland, the house has magnificent views.

Dr. Boslough was a busy man. He was co-owner of and practiced medicine at the Ashland Sanitarium. He was owner of the Hygienol Chemical Company in town. He also saw patients at his house on Hillcrest Street. In this photo, you can see the front door which brought guests into the living room of the house on the right, and another door that opened into his medical office waiting room on the left.

Boslough sold the house and left Ashland about 1923. I will write more about the house and Dr. Boslough when I write a photo essay about Hillcrest Street. Let’s now focus on the 1990 Tree of the Year.

According to Atwood, “The [Monkey Puzzle tree] seeds were brought to Ashland by Dr. Boslough and given to Lithia Park and several Ashland residents.” I have not seen any clue as to where he got the seeds. The tree at Dr. Boslough’s house was likely planted in 1913, based upon a 1915 photograph that shows the edge of a small tree at the same spot in the front yard.

Only a few Monkey Puzzle trees still grow in Ashland

Here are photos of the two other Monkey Puzzle trees I have seen growing in Ashland. If you know of others, please leave a comment at the end of the article to let me know.

The Monkey Puzzle tree on Ridge Road is about the same size as our Tree of the Year, indicating that it was probably also planted in 1913 from one of Dr. Boslough’s seeds.

There is a new Monkey Puzzle tree recently planted on Morton Street. This photo shows you how attractive they look even when young.

A large Monkey Puzzle tree by the Lithia Park tennis courts (now Pickleball courts) died and was removed about ten years ago. Here’s how Christopher John described the process: “I was involved in the removal of the one in Lithia Park. It took us only 30 minutes to cut it down, then the next six hours to pick it up – wearing double-layers of gloves! The leaves on those branches are intensely sharp. They are super-cool to look at, but not to work on.” A new Monkey Puzzle tree seedling was planted as a replacement at the same park location, but it is now gone as well.

I remember one growing in a front yard on Siskiyou Boulevard, but it also died some years ago.

Our Tree of the Year in 1990 was the Monkey Puzzle tree at 1 Hillcrest Street. Since it was planted by Dr. Boslough in 1913 (probably), the tree is now 110 years old. They grow best at higher elevations, based upon their range in Chile and Argentina. Ashland seems to be a challenging environment for them, since most of the Monkey Puzzle trees planted in Ashland have died. In their native environment, 110 years would still be considered a “young” tree. Several websites describe their lifespan as 700 to 1,000 years in ideal locations.

Arborist Christopher John has worked on this tree for homeowner Gayle Titus. Based on his experience during the past five or six years, he told me: “Climbing this tree is like climbing a porcupine.” What a great metaphor! Take a look at this close-up photo of the leaves. Every one of them is nearly razor sharp.

Christopher described the Tree of the Year as very healthy. The only tree maintenance required is periodic removal of dead lower limbs. However, even that is challenging for this tree in this location. Notice how steep Hillcrest Street is right here. His company Canopy Tree Service can’t use their bucket lift truck to prune this Monkey Puzzle tree because of the steepness of the street, so they have to climb the tree. However, they also can’t use a normal rope system to climb this tree. They are concerned for the safety of the crew, since the rope might be cut by the sharp leaves. So they have to adapt and be “slow and careful,” in Christopher’s words.

The home owner Gayle Titus described a young Monkey Puzzle tree now growing under the “parent” tree as having grown from a sucker off the main tree’s root. Arborist Christopher agreed it could be a sucker, or it may have grown from a seed as well. Both the 110-year-old tree and the baby are healthy, so he is fine with letting the youngster continue to grow. Photos of mature trees in their native South America always show a tall bare trunk topped by a small green crown. In this case, the tall bare trunk will give the youngster a chance to grow unimpeded, with access to sunlight, for many years.

After living with the Monkey Puzzle tree for 31 years, Gayle just learned a couple months ago that the seeds are edible. The seeds (or nuts) are similar to pine nuts, but much larger – closer to the size of an almond. They were food for the indigenous people of South America. If the tree produces seeds next summer, Gayle plans to try them. If I am able to try them as well, I will let you know how they taste.

How did “Monkey Puzzle tree” get its common and botanical names?

You are probably wondering, as I did, how the tree got this ridiculous common name. As you might expect, it is an odd story. According to Matthew Wilson, “Some time in the late 1840s or early 1850s Sir William Molesworth purchased – for a princely 20 guineas – a specimen of the then uncommon Araucaria araucana to plant in his garden at Pencarrow House near Bodmin, Cornwall. As he showed off his unusual prize to a group of dinner party guests, one of them – the noted barrister and Benthamist Charles Austin – remarked that the hard, very prickly leaves and their unusual overlapping arrangement on the branches ‘would be a puzzle for a monkey’. Despite the singular absence of any monkeys for the tree to puzzle in its Chilean homeland, it was not long before ‘monkey puzzler’ and then ‘monkey puzzle’ entered the vernacular and stuck.”

The origin of the botanical name is also an odd story. The botanical name, Araucaria araucana, is based upon an incorrect name for the indigenous people who lived in Chile where the tree thrived and for whom the seeds were an important food source. Historians say they called themselves the Mapuche people, but the Spanish conquistadores called them the Araucania people – which eventually became Araucaria araucana.

Monkey Puzzle trees in their native Chile and Argentina

The national tree of Chile, the Araucaria once grew in vast forests, with fossils of the trees found from as long ago as 100 million to 200 million years. In other words, the dinosaurs would have walked through Monkey Puzzle tree forests and eaten their seeds.

The wood is hard, durable and resistant to decay. This may be why many of the Monkey Puzzle trees in Argentina and Chile were cut down for building structures, bridges, piers, furniture and more. As a result, the species has been protected from logging in Chile since 1990.

In his 2013 article, Wilson gives us another fascinating story: this one how the Araucaria tree was first brought from South America to Europe. He gave credit to Archibald Menzies, the naval surgeon aboard a sailing ship captained by George Vancouver that made a four-year circumnavigation of the globe. “As a dinner held by the Governor of Chile, the resourceful Menzies was served the seed [of Araucaria] for dessert and rather than eating it squirrelled a handful into his pocket.” He was able to raise five seedlings from these seeds, three of which were given to the Royal Botanic Gardens in Kew, England.

Arborist Christopher John surprised me by telling me that famous environmentalist John Muir was so fascinated by this exotic tree that he traveled thousands of miles to see it. It turns out that Muir was 73 years of age when he took this trip to South America, which included hundreds of miles of walking through forests! It was Muir’s last trip before his death at age 76.

Here is the story in Muir’s own words, excerpted from a letter he wrote from South America on December 6, 1911: “But I’m now done with this glorious continent, at least for the present, as far as hard journeys along rivers, across mountains and tablelands, and through strange forests are concerned. I’ve seen all I sought for, and far, far, far more. … From Rio I sailed to Santos, and thence struck inland and wandered most joyfully a thousand miles or so, mostly in the State of Parana, through millions of acres of the ancient tree I was so anxious to find, Araucaria Brasiliensis. Just think of the glow of my joy in these noble aboriginal forests—the face of every tree marked with the inherited experiences of millions of years. From Paranagua I sailed for Buenos Aires; crossed the Andes to Santiago, Chile; thence south four or five hundred miles; thence straight to the snow-line, and found a glorious forest of Araucaria imbricata, the strangest of the strange genus.” [Note that Araucaria imbricata is an older Latin name for the Monkey Puzzle tree, correctly called Araucaria araucana.]

Here is one last look at the tree, comparing photos taken in 2001 and 2023. Notice how the tree canopy has moved toward the top of the tree in the past 22 years. This is normal for Monkey Puzzle trees, as you can see from the photo of the forest in Chile and from John Muir’s illustration.

More Monkey Puzzle trees in town (tips from my readers)

Badè, William Frederic, The Life and Letters of John Muir, 1924.
Accessed November 2022 through this website:
https://www.yosemite.ca.us/john_muir_writings/the_life_and_letters_of_john_muir/chapter_17.html

John, Christopher. Interview on November 17, 2022. Arborist Christopher John is the owner of Canopy Tree Service. He is also currently Chair of the Ashland Tree Commission.

Wilson, Matthew. “Riddle of how the monkey puzzle tree came to be a UK favourite,” Financial Times, July 5, 2013. [accessed January 2023]