“The ‘Ashland peach’ was known all over the Pacific Coast and marketed in the Eastern states and in Canada. (The Max Pracht orchards on Ashland Street took World’s Fair premiums in Chicago.) From a few hundred boxes of peaches shipped prior to 1890, the industry grew until the 1899 output was 75,000 boxes, more than 60 railroad boxcar loads.” (O’Hara page 64)

Today we know the Rogue Valley as a “pear paradise.” I had no idea peaches were such a huge part of Ashland’s economy in the late 1800’s until I started researching Pracht Street for this article.

“60 railroad boxcar loads” of peaches shipped out in 1899 alone! That is amazing.

Take a look at this excerpt from an 1897 essay extolling Oregon fruit: “In this connection the fact may be noted that the largest apple, the largest pear and the largest cherries, exhibited at the Columbian Exposition [1893 Chicago World’s Fair] were grown in Oregon, and that a special gold medal was awarded to Max Pracht of Ashland for the largest and best flavored peaches.” (The Overland Monthly, June 1987) (emphasis added)

Here is what his home and surrounding orchard looked like during the pruning season in 1900. 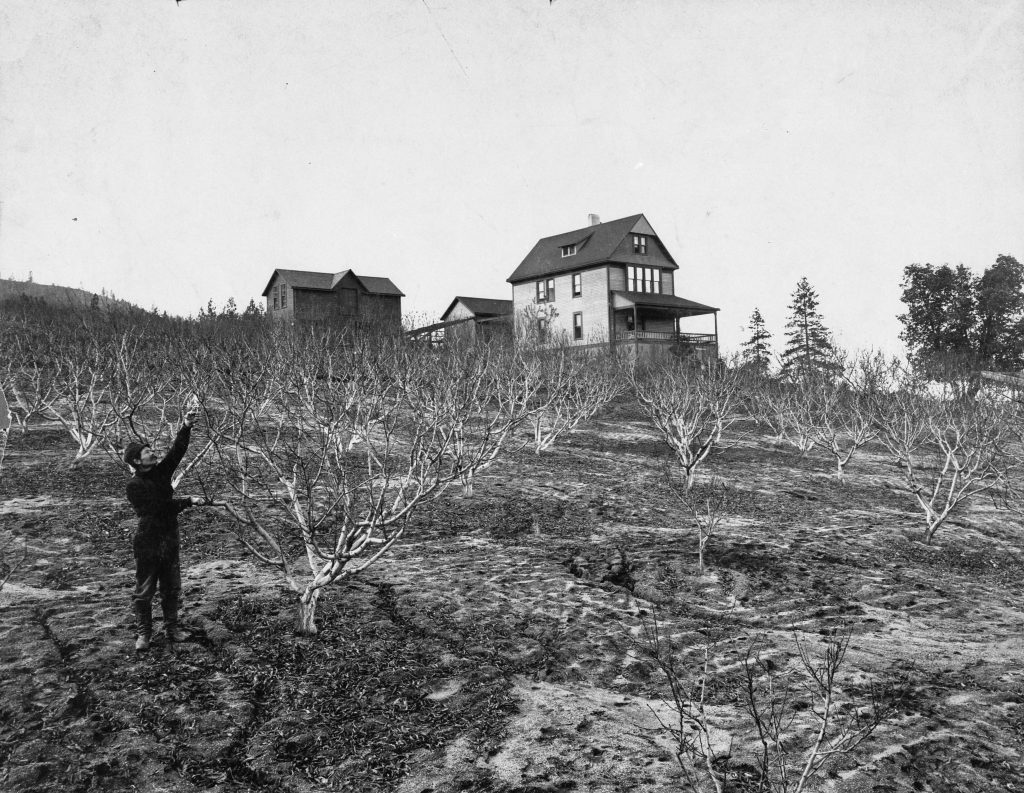 It stands to reason that Pracht Street, where his home and orchard were located, was named after Max Pracht.

“Do you know that if you live around Pracht Street you are probably living on the old Peachblow Fantasy Orchard land? It was 120 acres of peaches right here in central Ashland. The largest peach orchard in the entire state of Oregon. The peaches were enormous. 20 ounce peaches were common with some as large as 26 ounces.”

Pracht Street is only two blocks long, with its two ends at Liberty Street and Euclid Avenue. If you like alleys, you can find one that heads south to Ashland Street and another that goes north to Pennsylvania Avenue.

There is a small one story apartment complex at 800 Pracht Street, and from there to Euclid it’s all single family homes. 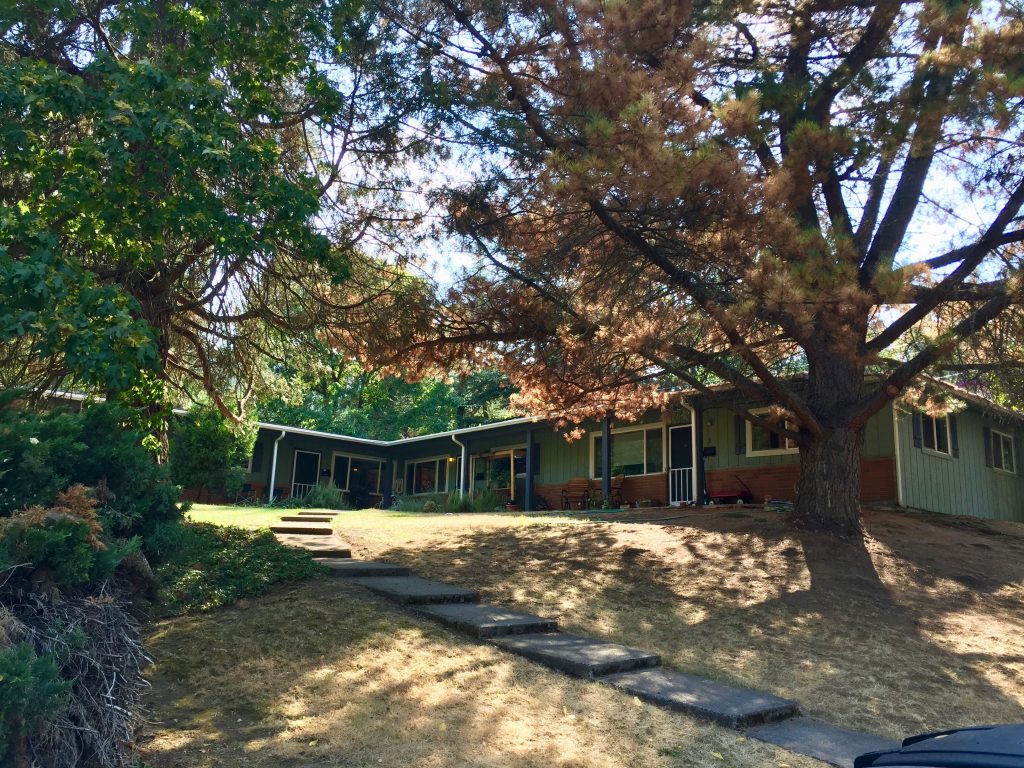 As I walked from Liberty uphill to Euclid Avenue, I searched to see if Max Pracht’s house was still standing. First, let me tell you about the yard art, chickens and skunk that I spotted along the way.

Ashland allows backyard chickens, and these are among the first I have seen in my walks around town. Then I spotted an unusual afternoon visitor…a young skunk. 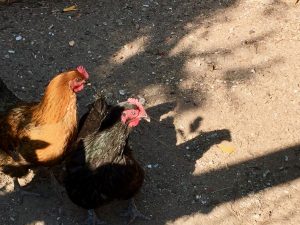 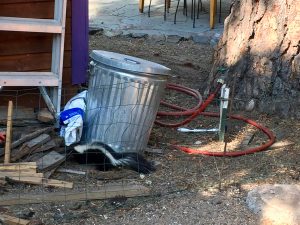 I enjoy finding yard art and other man-made beauty, as well as nature’s beauty. As I walked the two blocks of Pracht Street, I found both. 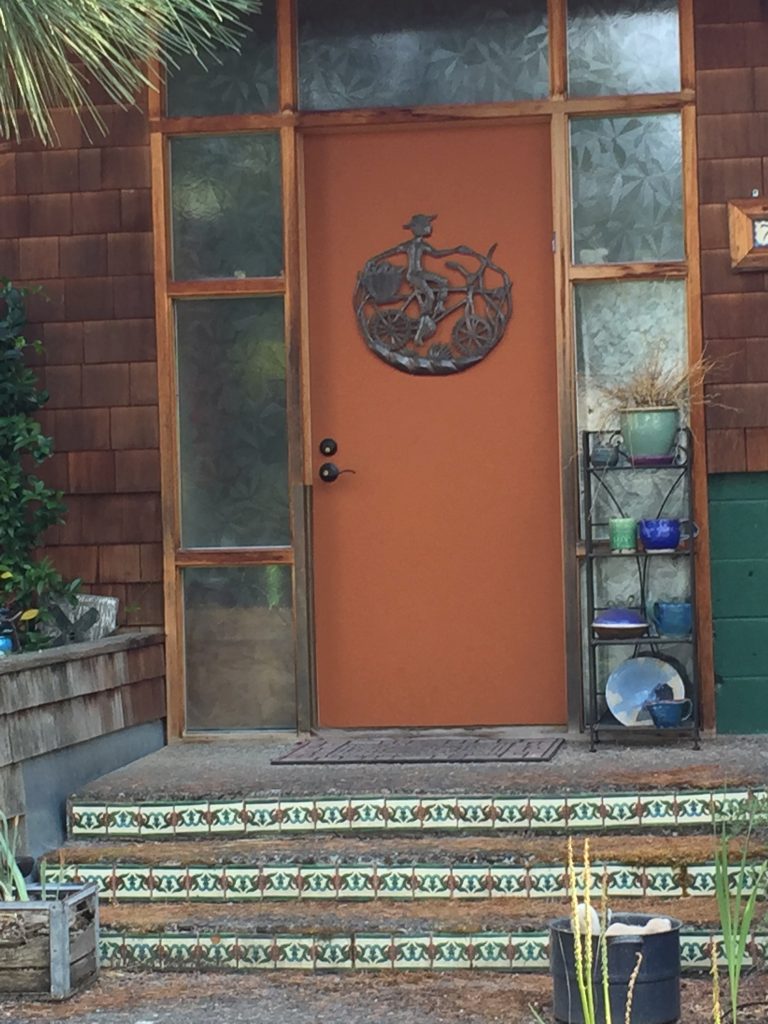 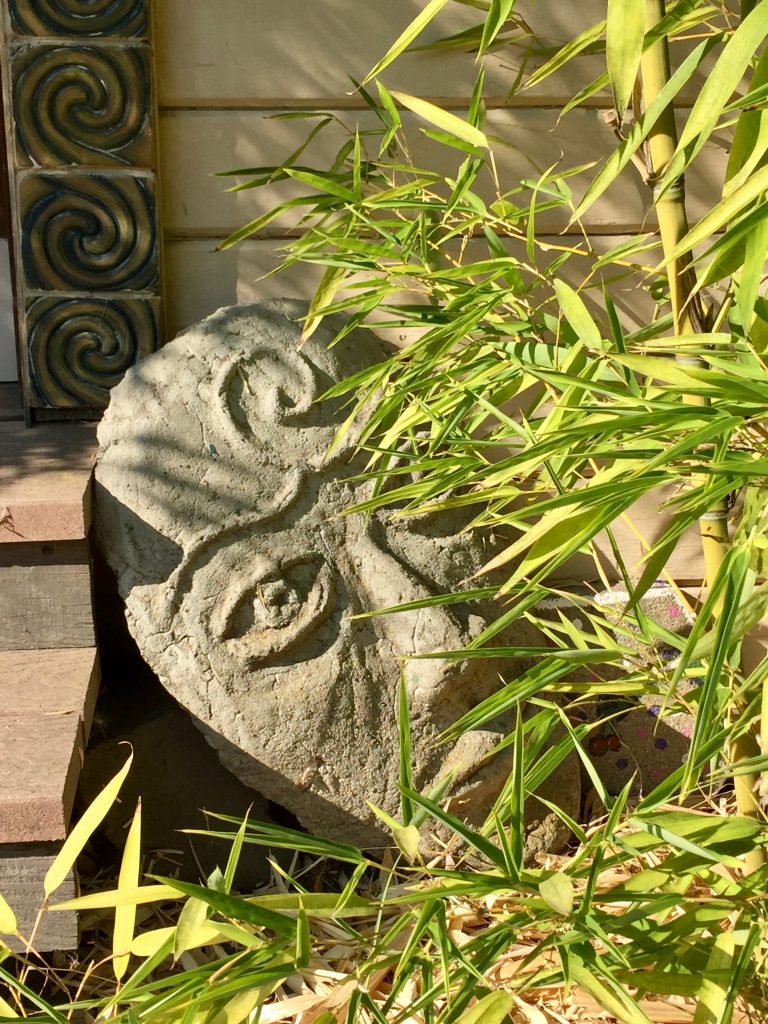 Yard art next to 715 Pracht Street 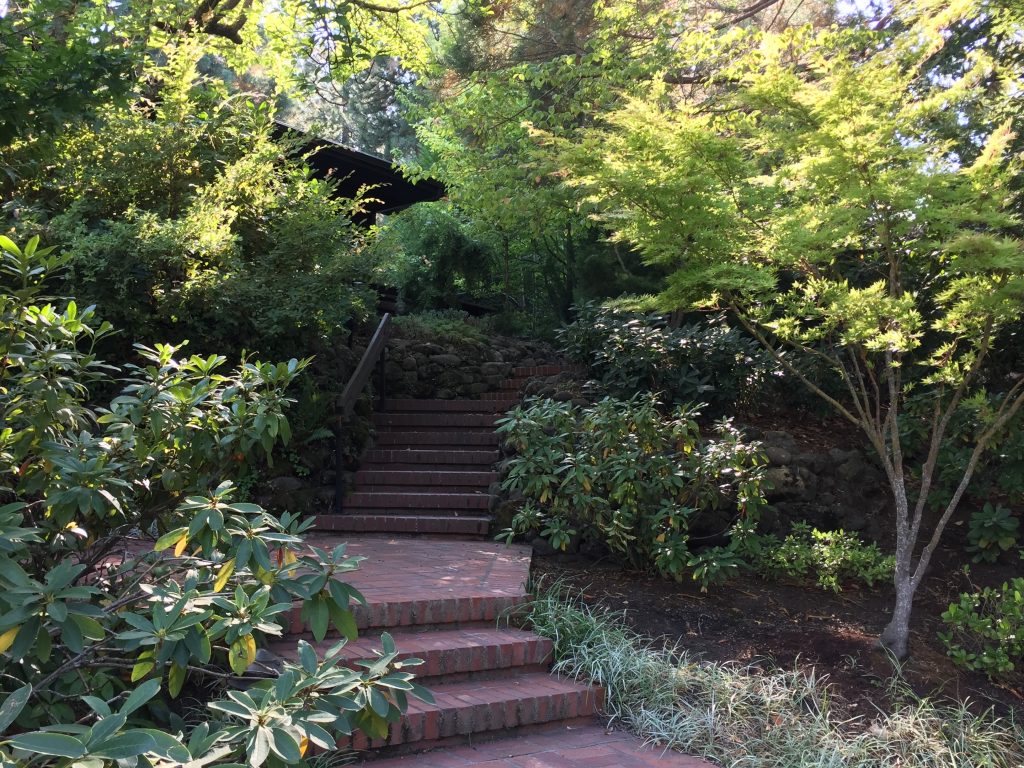 Lovely, rhododendron filled garden at 640 Pracht Street. I’d like to come back here in April or May when the flowers are in bloom. 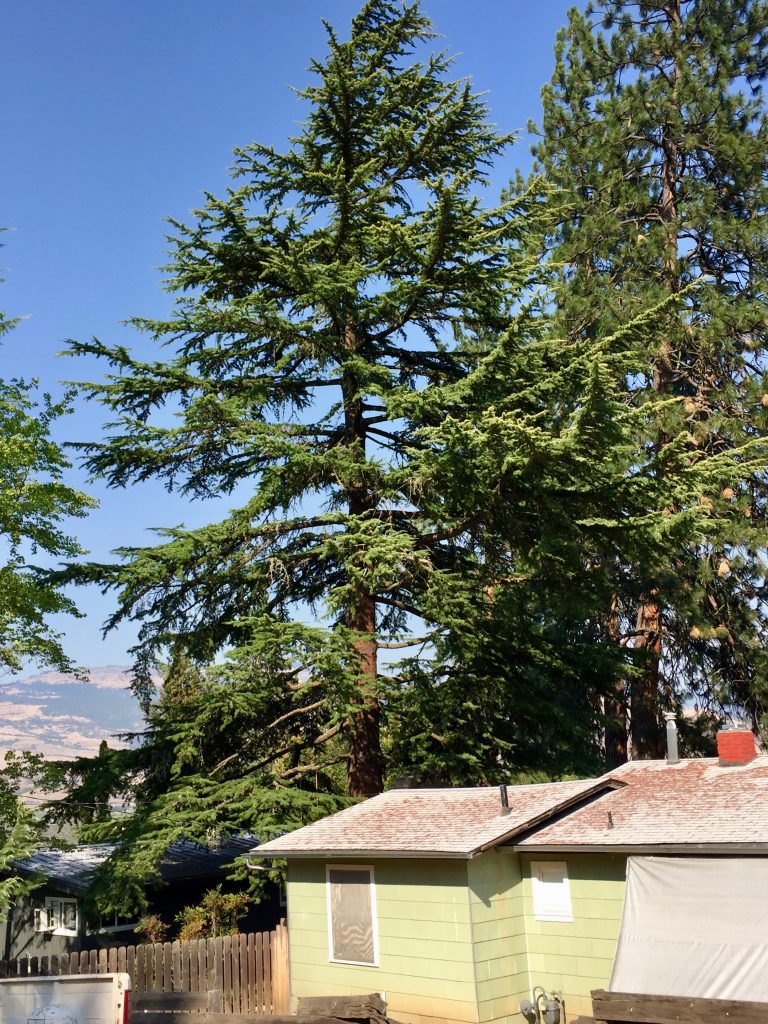 I will finish the article with more about Max Pracht, who was an amazing man and a great booster of early Ashland. I think I found his house toward the top of Pracht at 660 Pracht Street. Take a look at the two photos below. The large yellow house at 660 Pracht is much larger than the Pracht house shown in the 1900 photo, but it is not unusual for houses to be expanded over the years.

To me, these two clues give it away:

What do you think? Am I right or is this just coincidence? 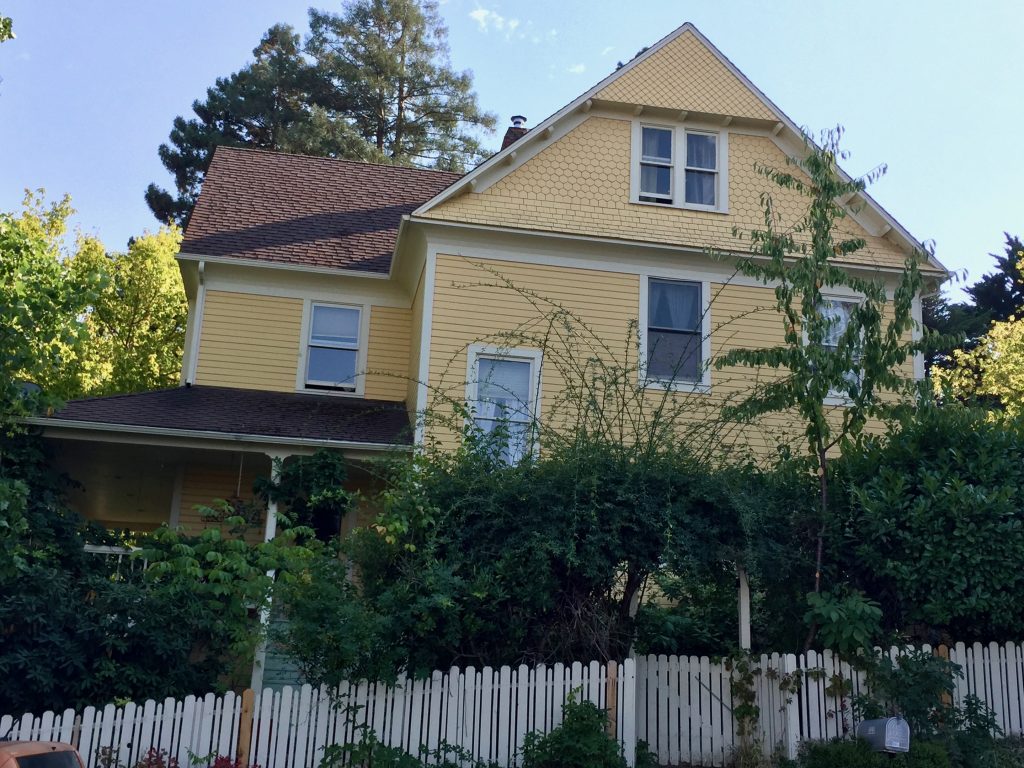 Max Pracht was “a Republican of irrepressible enthusiasm,” back when the Republican party was the party of Lincoln, the party that had the courage to hold our country together and outlaw slavery.

He was born in Palatinate, Germany in 1846. There was unrest and revolution in Germany in 1848, which caused his father to immigrate to America with the family, including two-year-old Max.

According to the Republican League Register of Oregon: “He served in the navy during the Rebellion, and is a comrade of Burnside Post No. 23, G. A. R.”

In other words, he was in the Union Navy during the Civil War. Then, as a veteran, he joined the Ashland (Burnside) post of the Grand Army of the Republic, the Union Civil War veterans group.

Max moved with his wife and three children from San Francisco to Ashland in 1887, purchased land, planted an orchard, and harvested his first crop of peaches in 1891. As of 1896, he was still waiting to receive the Gold Medal he won as first prize for his peaches at the 1893 Chicago World’s Fair.

In addition to being a grower and marketer of premium peaches, he also developed some of his land for housing after the opening of the railroad led to a population increase in Ashland starting in 1888. On top of that, this busy businessman owned the huge Hotel Oregon downtown in 1891-1892, and his son Alexander went on to own the Ashland Depot Hotel [see Ashland Depot Hotel article here] after 1901.

The Jacksonville newspaper wrote a detailed article in 1893 explaining in part why Pracht orchard peaches sold for 25% more than the market price for peaches, and why they were shipped all over the country. In addition to growing large, flavorful peaches, Mr. Pracht also took the extra step of communicating their premium nature to customers on each individual peach wrapper. In the process, he was a huge booster for Ashland and Southern Oregon.

“People who are fortunate enough to obtain peaches from the ‘Peachblow Paradise Orchards’ of Max Pracht this year will be fully apprised of the celestial character of the fruit, no matter in how distant a clime it may be unpacked and eaten. Mr. Pracht has just had nearly 100,000 peach wrappers printed, each bearing in blue ink on white paper his orchard trademark designed by himself. It advertises the climate of southern Oregon, the city of Ashland, the orchard business of Mr. Pracht, and there will be no danger of retail dealers in Oregon, Washington, Montana or elsewhere selling his peaches as ‘California fruit.’ Neither will there be any likelihood of any scrubby peaches being shipped in those wrappers. Mr. Pracht’s method of paying the strictest attention to the details of selection, packing and marketing, proves its value from the fact that he is able to ask and receive for his peaches 25 percent above the market price.“
(Democratic Times, page 3)

My thanks to Terry Skibby for the historic photograph.

The Southern Oregon Historical Society is a great resource.  (1) If you like history, SOHS can always use volunteers to help with research, digitizing and transcribing. Learn about SOHS here.  (2) Second, I encourage you to join SOHS as a member to support their work.  The JOIN link is here.