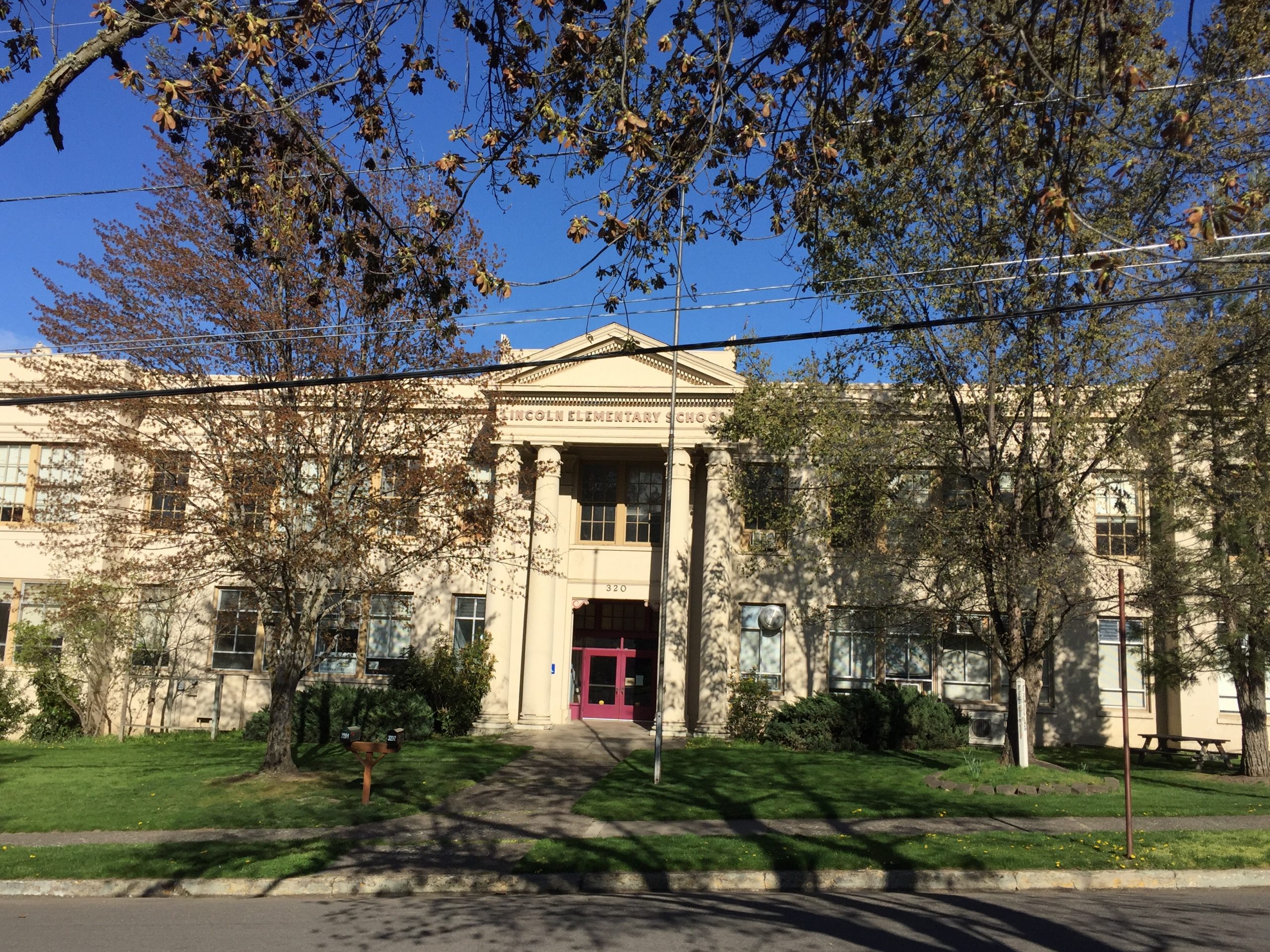 Let’s begin with a sight that I believe is unique to Beach Street.

Writing about Beach Street was my first “Walk Ashland” blog post, published April 12, 2018. So this is our 2-year anniversary!

Beach Street starts at Siskiyou Blvd and ends uphill at the foothills of the Siskiyou Mountains. You’ll find a mix of modest homes, large homes, apartments and condos as you walk Beach Street. The street has open space at Lincoln School, plus many large Ponderosa pines, firs and oaks.

My sad bear story is encapsulated in the photo below. The bear was doing what bears love to do…go fishing, in this case in my backyard pond.

My wife and I have enjoyed a small pond, with plants and colorful koi fish, for the past 15 years. The first ten years were uneventful. We had seen a cinnamon-colored bear eating plums from a tree in a neighbor’s yard a couple times, but no sign of bears in our yard. Then in 2015 a bear discovered the eight healthy (and mostly fat) koi in our backyard pond.

The first koi to become bear food was our 10-year-old black and white koi named Larry. Within a week, the bear had returned and fished out two big beautiful bright orange koi named Big Guy and Dreamsicle. We couldn’t handle seeing them all picked off one by one, so I got in the pond with a fish net and captured the survivors so we could take them back to the shop where we bought them.

Here is the happy (so far) ending to this story. The youngest of our eight koi, a three-inch long almost-baby named Prospero, eluded my attempts to catch him. He disappeared, probably hiding among the pond’s thick plants. Then, as if by magic, he reappeared two months later. After he survived one year all alone in the pond, we got Prospero a “buddy” the following year. We know we could lose them at any time, but as of spring 2020 (“knock on wood”) we have two koi to watch as we sit by the pond.

Suddenly I saw a 5′ tall, 200 pound or so black bear climb over the low side-yard fence 35 feet away from me – way too close – and it was no longer a relaxing summer evening. I stood up, holding the newspaper. Then the bear saw me. It stood up. GG-cat took off running back to the house cat door faster than she had ever run in her entire life. My wife happened to be at the screen door nearest the bear when it appeared, so she started yelling at the bear. Meanwhile, I backed away slowly, newspaper in hand.

Fortunately, the bear was as afraid of us as we were of it, so it shot up the nearest tree. After looking around from its perch ten feet up, it decided not to stay up a tree in our yard. It came down the tree, climbed over the fence, and then lumbered off through two neighbors’ yards to Liberty Street and hopefully uphill to the forest.

Speaking of bears, during 2018 I met my neighbor Brad as he was “playing with rocks,” – as he put it – building a no-mortar rock retaining wall. We were discussing how all of upper Beach Street a century ago was likely a farm and orchard. He told me about his old cherry and apple trees, and then declared his frustration that every summer a bear crushes his chain-link fence in order to get in and enjoy ripe cherries.

Changing the subject from bears to angels, I met Nina as I was admiring her front yard full of angel sculptures.

The elementary school was originally used for the teacher training program at Southern Oregon State Normal School (now SOU) one block away. Due to declining elementary school enrollment, Lincoln was closed in 2005, but is still owned by the school district.

Lincoln Elementary School has an interesting history. In July 1925, Ashland’s only elementary school was overcrowded and voters passed a bond to finance the construction of a second school. By 1926, Lincoln School opened, with a dual mission to educate elementary students and to train new teachers who attended the nearby Southern Oregon State Normal School (now SOU).

The Lincoln School building was designed by the same well-known Portland architectural firm that in 1924 designed Ashland’s Lithia Springs Hotel (now Ashland Springs Hotel). The core of Lincoln School, with its formal Corinthian-inspired columns, remains as it was in 1926.

The building was expanded and remodeled several times through the years. In the mid-1940s, elementary schools were again getting overcrowded and there was discussion of expanding Lincoln School. A 1946 fire that destroyed much of the school led to remodeling and soon after that, the addition of three classrooms and a multipurpose room. As Ashland continued to grow, two more classrooms were added to the school in 1955.

Do you recognize the “Fortmiller” name?

Walking Beach Street one day, I met someone with a name that Ashland “old-timer” readers will recognize: Fortmiller. I met Lisa Beach (formerly Lisa Fortmiller), whose parents owned Fortmillers Department Store at 142 East Main Street in downtown Ashland for many years. She remembers being able to pick her favorite clothes off the racks as a child.

Some things change…like historic houses being altered beyond recognition (sad face) or being renovated to restore their historical look (happy face).

Some things don’t change…like Lisa (Fortmiller) Beach still having the same reserved seats at Ashland High School football games that have been in her family for 50 years.

Here is a garden highlight of the 2018 walk — beautiful daffodils, which the deer have left alone for us to enjoy.

I hope you have enjoyed this story. Please sign up to receive an email each time I post a new story as I walk every street in Ashland.