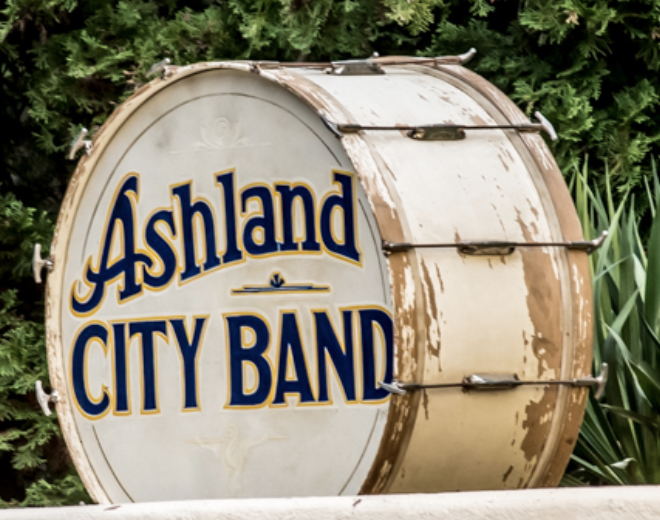 The Ashland City Band usually plays on Thursday evenings at 7:00 pm from early June through mid August. Bring your chair or blanket and join them at the Lithia Park Bandshell.

The Ashland City Band is truly an Ashland institution. Its roots go back to 1876, and funding for the band was even written into the Ashland City Charter by our citizens in 1938. It is one of only two city bands in the state of Oregon that give a full slate of weekly concerts each summer.

First was Raoul Maddox, with the Ashland City Band for 71 years, from 1947 to 2018! Of those 71 years, he was the band conductor for 21 years, from 1977 to 1997. Maddox joined the band as a trombone player at age 14, while attending Medford High School. Sadly, Maddox passed away in September 2020. In case you are interested, his first name is pronounced ‘rail,’ as in ‘railroad.’

The second was Don Bieghler, now the longest serving conductor in the history of Ashland City Band. If you attend band concerts, you hear his informative introductions to each piece of music. He has been conductor for 22 years, from 1998 until now (2021), so he just passed Maddox’s record. However, he has been with the band in total for ‘only’ 56 years. Bieghler joined the band in 1963 as a clarinet player, and then transitioned to conductor in 1998 when he took over from Maddox. Wight described Bieghler as “truly beloved,” one reason why band members are so loyal, returning to play year in and year out.

The third was Ed Wight, not a conductor…but the son of a conductor. Wight tried to join the band in 1965, when he auditioned with his clarinet as a 14-year-old. He was disappointed to be turned down, but he came back at age 15, auditioned again, and was accepted into the band. You might call Wight a band “princeling,” because his father Dave Wight conducted the band for nine years, from 1968 to 1976. Since Ed lived outside of Ashland for a number of years, he has now played in the band for 37 years. He has also served as Band Librarian for 28 of those years.

Ed told me a funny anecdote about his father’s creativity. A few minutes before he was to conduct a concert, his father Dave discovered he’d left his conductor’s baton at home. There was no time to get it, so Dave broke a tiny branch off a tree and used it for the concert.

Bieghler, Maddox and Wight described three 20th century conductors who stand out for their transformative influence on the band.

Ward Croft, conductor from the 1920s to 1941, established the summer tradition of Thursday nights in Lithia Park (which we still enjoy). Earlier city bands contained almost exclusively brass instruments. Croft expanded the band to include a full complement of woodwind players (flutes, oboes, clarinets, saxophones and bassoons). It was now a full concert band. As an aside, Croft even featured the “Little Symphony” orchestra for some Thursday concerts in the park during the early 1930s. This Little Symphony was a precursor to today’s full Rogue Valley Symphony.

Glenn Matthews, conductor in 1947 and from 1951 to 1954, gave the band its modern title – Ashland City Band. It had previously been called the Ashland Municipal Band for many years. You might be surprised to know that for decades the National Anthem was played at the end of each concert. Matthews began our current tradition of opening each concert with the Star Spangled Banner. He also standardized the ‘extra concert’ during the July 4th week. You may have noticed that if the 4th of July is not on a Thursday, the City Band plays two concerts that week. This maintains the tradition of summer Thursday evening concerts started by Matthews. Back in the 1920s, 30s and 40s, the band usually played only one concert that week – on July 4th.

Bieghler and Wight also praised Raoul Maddox, who was sitting at the table with us. While conducting from 1977 to 1997, Maddox expanded the band from about 55 players to 75-80 players. More important than quantity was the boost in performance quality during Maddox’s tenure. Ed told me “the band is not only bigger, it’s better – as it now draws consistently on Rogue Valley Symphony wind players, SOU Faculty members and local band teachers who want to play during the summer.”

“…the audience spontaneously stood as one – and that brought tears to my eyes.”

Ed Wight described a moment in the band’s history that deeply moved him. “While we get a partial standing ovation at the end of every concert, we almost never get one during the concert itself. I only remember one such occasion. In 2012 we performed a medley of Irving Berlin tunes. It was a glorious arrangement, and closed with one of his two most famous songs – ‘God Bless America.’ It was such a beautiful, heartfelt version, the audience spontaneously stood as one – and that brought tears to my eyes.”

This is one small example of how the Ashland City Band uplifts us and brings us together as a community. We are fortunate to have this dedicated group of musicians in our midst, summer after summer, year after year.

I will close with this quote from an audience member that really struck me: “The Ashland City Band is magical. It reminds me of the movie The Music Man, which I loved. Not that the band is the same as the Music Man, but there is a similar flavor and feeling of an old-time place. It’s the flavor of a place where people in the community come together to sit in the park on the lawn, eat ice cream and listen to music.”

There are many more City Band stories to tell. I will describe the band’s history and share other funny and meaningful band stories in Parts 2, 3 and 4 of this series about the Ashland City Band.

Author in-person interview with Raoul Maddox, Don Bieghler and Ed Wight, July 7, 2019. Thanks to Ed Wight and Don Bieghler for proofing the article and adding more of their memories in the process.

Click below to read Part 2 of the four-part series about Ashland City Band.