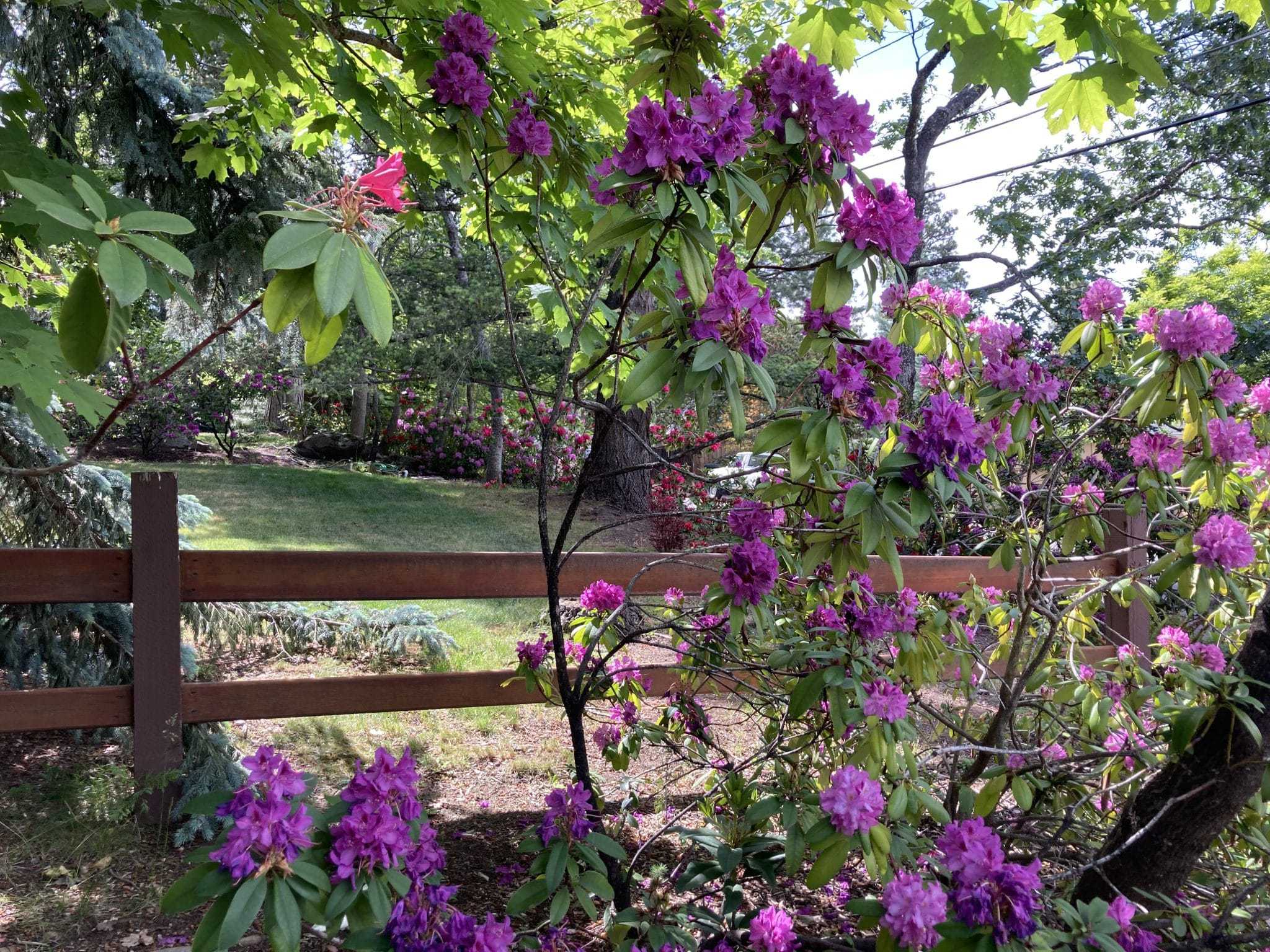 Garden of the Month.
JFK slept here…maybe.
There are two Prospect Streets –
separated by Roca Canyon.

I have trees, yard art and stories to share with you from my walks along Prospect Street. Prospect runs east-west just above (to the south of) the SOU campus. For this photo essay, I first walked from Roca Street to the west end past South Mountain Avenue. I thought I had walked all of Prospect Street. An alert reader pointed out there is “another” Prospect Street on the east side of Roca Creek and Roca Canyon! It is one block long, between Leonard Street and Palmer Road. I have added photos from the “east side” Prospect Street to my photo essay.

Let’s start with this bright green garage door at 1170 Prospect Street. The color definitely pops, especially in contrast with the bright white door next to it. The light green stairway handrail behind the abstract bird adds to the color palette.

I enjoyed seeing the cheery bird on a wall next door at 1190 Prospect.

There is a lot to see once you get to the intersection of Prospect and Elkader Streets. At the northeast corner, you can look both down and up for nature’s beauty. I’ll start with the simple, even elegant, beauty of a very old juniper bush. As you can see in the photo above, it stands alone at the corner, hardly noticeable below the two magnificent trees. Take a closer look and its aged beauty shines forth.

The two massive trees share and dominate this front yard. The taller tree on the right is a Douglas fir, while spreading out more on the left is a blue atlas cedar. These photos show the difference in the needles of the two trees, as well as the branch structure.

The Ashland Garden Club has been choosing a Garden of the Month for more than a decade. At the southwest corner of Prospect and Elkader Streets, you will see the Garden of the Month from May 2013. The garden has continued to grow and thrive in the nine years since then. I will quote from the Garden Club’s 2013 description of the site. I didn’t discover this garden description until after I had seen it for myself and had a chance meeting with homeowner Jonathan.

The Garden Club wrote: “The first thing you notice upon arriving at 1120 Prospect Street is the natural quality of the garden – simple, elegant plantings that look as if no one has fussed over them at all. But this garden has been 15 years in the making. At first a tangle of ivy and bushes, it has been transformed into one filled with rhododendrons and peonies that carpet the light-filled, woodsy property. A variety of trees, including Japanese maple, oak, blue spruce and deodara cedar, provide the shade that make this garden thrive.

“Jonathan Warren, the current owner and creator of the garden, moved 15 years ago into the home formerly owned by the Cotton family. Built in 1948, it was the first home on the hill above the university from Siskiyou Boulevard. Looking beyond the garden, you’ll see a home that fits the property. Built in the style of Frank Lloyd Wright, it is constructed of clear red cedar. But the most prominent feature is a large boulder that lives both outside and inside the home, creating a small pond in the living room. Talking with Jonathan, there is an obvious sense that both the home and garden are well loved.”

As I walked by the garden yesterday (June 8, 2022), the first thing that struck me was the wall of welcoming, colorful, blooming rhododendrons as I turned the corner from Prospect Street and began walking up Elkader Street. They are just reaching the end of their peak bloom time, so I took photos to try and capture the feeling. You can judge for yourself if I succeeded.

Camera still in hand, I spotted a man watering and met Jonathan Warren in person. He responded with a big smile as I praised his garden, which has now been a labor of love for 24 years. He told me the house was built by the Cotton family in 1948.

John Cotton and family moved to Ashland from South Africa in 1946. They must have moved here with a lot of money, because John Cotton opened the Cotton Lumber Mill and bought 5,000 acres of timberland on Dead Indian Memorial Road to supply logs for the mill. According to the History of the Rogue Valley, “The mill closed in 1957 when the recession hit. The original timberland is now the site of EarthTeach Forest Park which is used for environmental education and forest restoration.”

Cotton was very active as a volunteer in the community. He was President of the Oregon Shakespeare Festival board in 1950 and President of Rotary Club in 1952 – 1953. He also served on the Ashland Parks Commission and was a member of the local Elks Lodge. Sadly, he died young, at age 51, in 1963.

Jonathan told me that he has heard from two different sources that President John F. Kennedy stayed overnight at the Cotton’s house in April 1960, during a brief Southern Oregon campaign stop. Kennedy was at that time the Senator from Massachusetts, and was campaigning for the presidency. He attended an informal gathering at Art Kreisman’s house on Liberty Street. He also spoke to an estimated audience of 1,800 people in an auditorium at Southern Oregon College (now SOU) and was the Grand Marshal of the Pear Blossom Parade in Medford.

After doing my own research in the JFK Library online archives, I learned that Kennedy did not stay overnight in Ashland during April 1960. However, he was in Southern Oregon overnight during March of 1959. I have not yet learned where he spent the night during that trip.

I pledge to create peace in my heart

Walking past South Mountain Avenue, I stopped to admire a colorful sign in the front yard of 1125 Prospect Street. It contains a unique message I have not seen in Ashland yard signs before. It says:

This house also has a striking house number sign and a relaxing bench for the homeowners and guests to sit on.

On the same block is one of the largest Ponderosa pine trees I have seen in Ashland. It is hard to see the scale of it in a photo.

Prospect Street ends to the west a short block past South Mountain Avenue. What caught my eye was the interesting architecture of a house built in 1973.

Finally, from the very end of the street, you will find magnificent views of the valley.