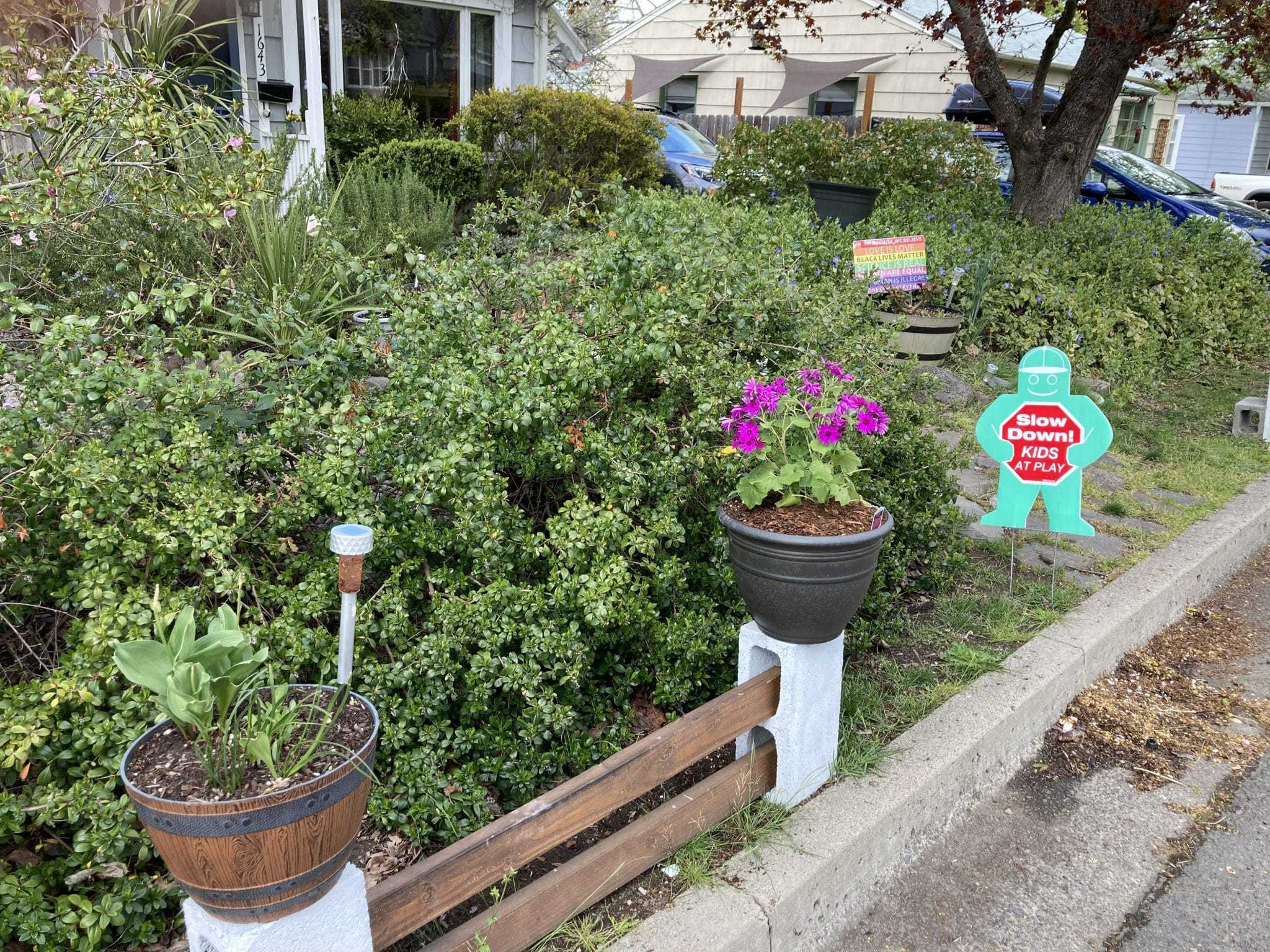 Quiet, family-friendly.
Only one block from Hunter Park.
22 photos + 2 videos.
One of Ashland’s short streets.

“This is an old-fashioned neighborhood street.”

I met Matt Locklin as I was walking Parker Street on July 6, 2022. He saw me taking photos and a video of a lush lavender plant that was filled with bees. We began talking and he told me Parker Street is filled with bees because he brought them here. One of his hobbies is beekeeping. Just this spring, he helped people by relocating three swarms of bees. Two went to the farm of one of his friends. One went to his back yard on Parker Street to join two other bee hives there.

As he and I were talking, Matt’s girlfriend Jenny Kuehnle briefly joined the conversation. She also lives on Parker Street, and owns Ahimsa Gardens, which does landscape design, installation and maintenance. Matt is the construction boss at the landscape company. Thanks to Matt, there are two bee hives at Jenny’s house in addition to the three hives at his house.

Matt described watching bees around a hive being “like a water feature.” I like his image comparing different kinds of flow in nature. I was surprised to see the video he showed me, in which he collects a swarm of bees without wearing the usual beekeeper protective clothing and head protection. He replied that he finds working with bees to be “exhilarating!”

He assured me that he got the queen bee into the box during this video. After this video was taken, he poked holes in the side of the box. Through the day, the rest of the bees gravitated to the box (through the holes) to join the queen bee. After dark, while the bees rested, he sealed the box and moved the bees to their new home.

Everyone I met during my two walks along Parker Street in April and July 2022 described this short street as “family friendly.” The many “Children Playing” signs along the street bear that out.

One of the reasons this is a family friendly street is its proximity to Hunter Park and Walker Elementary School. Both the park and school are one short block away. In addition to large lawn areas in its 10 acres, Hunter Park has tennis courts, baseball fields, Daniel Meyer Memorial public swimming pool, picnic areas and a playground. It is also the site of Ashland’s Senior Center.

The architecture firm BBT wrote on their website: ” Walker Elementary is a historic school centrally located in Ashland, Oregon. Bordered by established residential neighborhoods, a city park, and other civic amenities, the school is uniquely connected to the history and fabric of the surrounding community.
The new building addition aims to connect to the existing historic portion of the school through the renovated library and cafeteria. In this way, the design celebrates what the school has in common while also recognizing what is unique. The addition will make the library more central to the school while the cafeteria acts as a bridge connecting the two school wings together. Another component to the design relocated the administration area. Moving administration out of the historic portion of the school offers an opportunity for the historic wing to expand programmatically while enhancing security, safety, and supervision.”

I found some interesting flowers, trees and yard art to photograph in my walks along this one block long street.

Why is it named Parker Street?

For those of you who like to know about street names, according to Galey the street was named for T.J. Parker, who built several of the houses here.