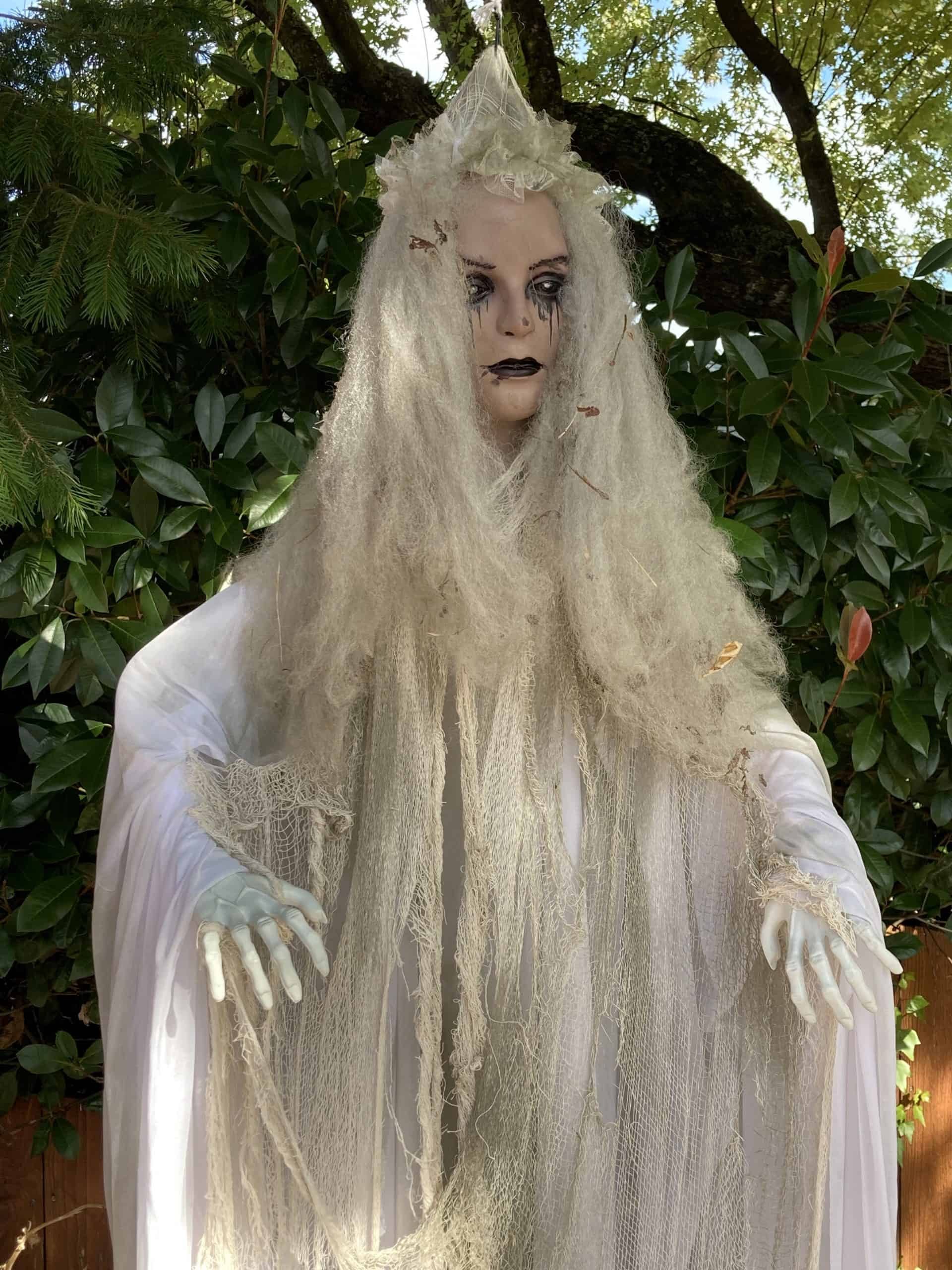 Spookiest Halloween house in Ashland.
A family of artists.
“Halloween is our favorite holiday.”
Preview of their “haunted house.”

Read on for stories and photos of the spookiest, liveliest, largest, most creative home Halloween display in Ashland. You have probably seen it, because the house is on busy East Main Street, across from the new National Guard Armory. Yesterday, my wife Kathy and I met with this family of artists who LOVE Halloween.

First, wrap your head around this story Karen (the mother) told us. She began, “When I was a little girl, until I was nine years old, I was terrified of Halloween. My brothers would always try to scare me. I would hide under blankets on the couch. I wouldn’t even go to stores where Halloween decorations were.”

Then Karen described how her mother found a way to neutralize the fear and alter the direction of her life. “My mom was a seamstress. When I was nine, she invented a character called “Golden Girl,” who was a superhero who was afraid of nothing. There was a cape and a mask and everything. When she gave it to me, she said, ‘You’re going to be Golden Girl, and you’re afraid of nothing this year.’ And from that point on, I was never afraid, and the pendulum went totally to the other side, with Halloween as my favorite holiday.”

“I have memories of making tissue paper ghosts and carving pumpkins every year.”

Karen’s family has been decorating for Halloween since her children Isa and Antonio were little. They were creative with costumes when the kids were younger. As the two became teens and weren’t trick-or-treating any more, the family focused on having visitors come to their house. Isa and Antonio are both artists, and Karen got her college degree in theater, so all three love letting their imaginations go wild with theatrical Halloween settings.

Hagatha the witch was the first animatronic creature in their Halloween decorations. Before moving to Ashland five years ago, the family made some “haunted house” type displays in the San Francisco Bay Area.

One of the most emotional moments of our conversation was when Karen described feedback her family received from Almeda fire victims.

“We had a lot of families visit last year who told us they had lost all of their decorations in the [Almeda] fire. They were big Halloween fans, so they appreciated that we went all out for their kids to enjoy, which was really sweet.”

Because of the slightly isolated location of their house, they had very few trick-or-treaters before last year. With the big, bold display in 2021, more than 100 people came by on Halloween, which was so much fun for the family. People have mailed them thank you cards, even left gifts they can incorporate into the Halloween decorations.

Isa added, “This was a positive reinforcement loop for us. Seeing that what we are so passionate about was also serving the community and making others happy — it made us want to do it more.”

They are expecting even more trick-or-treaters this year. I don’t want to give anything away, but I’ll add that they have a haunted house inside the garage, where the candy will be handed out. It has a Pirates of the Caribbean theme.

In case you are wondering:

The display at the corner is a homemade coffin, holding one of those thirteen skeletons.

Antonio contributed the body parts on the line and on the table.

All of the lights are powered by solar cells.

Antonio gets the last word

Did I happen to mention that this family loves Halloween? I’ll give the last word to Antonio.

“We will start planning for Halloween 2023 on November First!”

A note about Isa:

If the name Isa Martinez Moore sounds familiar to you, it is probably because you have heard or read that Isa designed and painted the BIPOC Celebration Mural at Ashland High School. I wrote three photo essays about the mural, which is part of Ashland’s public art collection. Part 1 (CLICK HERE) describes the high school Truth to Power club’s vision for the mural. Part 2 (CLICK HERE) focuses on Isa and their mural painting process. Part 3 (CLICK HERE) introduces the life and social justice work of the eight people portrayed in the mural.

Have a safe and fun Halloween!