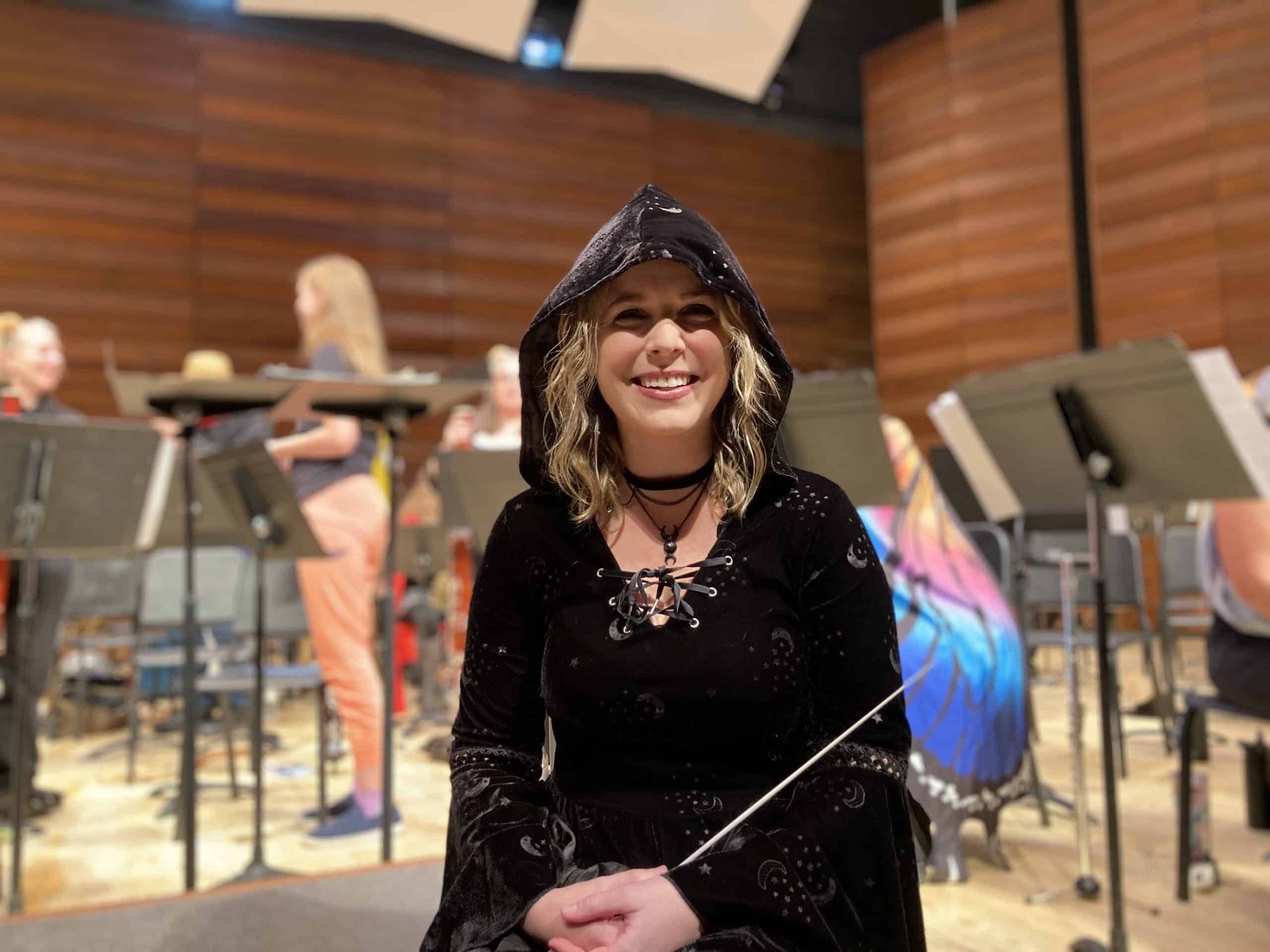 Posted at 10:18h in Holidays, Music by Peter Finkle 0 Comments

In the 1962 movie “The Music Man,” Harold Hill came to a small town in Iowa and shook things up. How about the “Music Woman” coming to a small town in Oregon and shaking things up? I sure felt it at the 2021 and 2022 Symphonic Band Halloween concerts.

The 2021 Halloween concert featured a wild work of music called “Godzilla Eats Las Vegas.” I kid you not. Not only that, but it was also accompanied by a video of Godzilla on a huge screen above the band. Doing what? Eating Las Vegas, of course.

For 2022, the Music Woman (Rogue Valley Symphonic Band conductor Christi Lundahl) swerved from Godzilla to Harry Potter and Mickey Mouse – all done to captivate and involve the youngsters attending this family-friendly band concert. As you can see in the photo below, a clip of Mickey Mouse as “The Sorcerer’s Apprentice” from the Disney cartoon Fantasia played on the big screen above the band during one of the pieces.

In her “Words of Welcome from our Artistic Director” for the 2022 program, Christi wrote: “Please feel free to take pictures, show off your costumes, dance, and hum along with your favorite tunes!” How often do you see or hear those words at a classical music concert?

Each youngster received a “Harry Potter wand” during their costume parade through the audience and across the stage – as the band was playing. Back in their seats, they used their glowing “wands” to help Christi conduct the next piece of music.

Finally, at the end of the concert, the children were invited to join Christi and the band onstage for parental photo opportunities. What a great idea!

Four of the six pieces played at this Halloween concert were written by living composers, another sign of Christi Lundahl’s willingness to shake things up. Here is the program from the October 29 and 30, 2022 concerts in Ashland and Medford.

Music played at the 2022 concert

Christine Lundahl came to Ashland in the summer of 2021, hired as the new Director of Bands at Southern Oregon University. She was also hired at that time to be band Director for the Rogue Valley Symphonic Band. Looking forward to the summer of 2023, you will see her leading our beloved Ashland City Band. She will bring her talent, creativity and people-skills to the City Band’s 146-year tradition as a community band.

To learn more about the Rogue Valley Symphonic Band, here is their website: